A couple of days after the brand-new Wonder Woman costume from Batman v. Superman: Dawn of Justice was revealed, my mom called me with an important question. “Why is it brown?” she asked.

“I don’t think it is brown,” I said. “The director, Zack Snyder, just favors these desaturated filters that make it look like that.”

She was placated, but only for a little while. A few days later, in the middle of a totally unrelated conversation that had already put her at peak fervor, my mom swung back to the sepia-toned superheroine. “I still don’t understand why she’s not wearing red, white, and blue!” she said. “If Wonder Woman isn’t wearing those colors, she could be anybody.” Her complaint made me think of an image that had gone viral comparing the similarities between Wonder Woman’s new costume and Xena, Warrior Princess … the difference being that Xena’s outfit is actually brown on purpose.

Again, I tried to explain the situation to her. “It might still be red, white, and blue,” I said. “We can’t tell, and we won’t know for sure until they put out more pictures. Or maybe the paparazzi will snap a picture of the costume from the set and then we can see what she really looks like.”

And that’s when I realized how silly I sounded. Warner Bros. had just released an official, high-resolution photo where you could examine every single facet of the new Wonder Woman costume in detail, from the tippy-top of her tiara to the bottom of her wedge-heel boots, yet if you wanted to know the simplest, most obvious thing about that outfit — what color it was — you were still shit out of luck. Sadly, that makes Batman v. Superman only the latest offender when it comes to sucking all the fun from its superheroes. Comic books themselves are filled with bright colors, so why are the movies adapted from them so determined to be dismal-looking?

It seems like ever since the first X-Men film came out in 2000, filmmakers have gotten gun-shy when it comes to dressing superheroes in their native garb. In that film, Wolverine blanches when he’s forced to put on the black leather costumes that the rest of his X-friends have donned (and that many future screen superheroes would wear, too). “What would you prefer, yellow spandex?” snarks Cyclops. Since Wolverine actually does wear yellow spandex in the comic books, the comment was both an in-joke that only superhero fans would understand and a repudiation of the colorful aesthetic they’d grown up loving. In a movie where one of the bad guys attacks the heroes with his elongated frog tongue, the notion that a man might wear an outfit with a color in it was deemed a bridge too far.

Bryan Singer directed that film; later, when he made the misbegotten Superman Returns, he didn’t slather his film in the filters that Zack Snyder would overuse, but he did tone down the cheerful red of Superman’s costume until it was a drab burnt sienna. Meanwhile, the X-Men series that Singer had left for the time being actually dared to dress its heroes in yellow for X-Men: First Class; when Singer returned to the franchise for this year’s X-Men: Days of Future Past, the color was once again forbidden, and most of the superheroes wore street clothes.

This toned-down trend reached its apex with Christopher Nolan’s The Dark Knight trilogy, which removed the yellow crest from Batman’s chest and grounded its story in the real world, a conscious effort to set these films apart from its predecessor, the reviled, neon-soaked Batman and Robin. When Nolan produced Man of Steel, Snyder’s first crack at the Superman franchise, the earthbound color palette of his Batman films remained the dominant aesthetic, and Amy Adams as Lois Lane was forced into neutrals, too. (By the time Snyder and his cinematographer laid all their filters down in post-production, even Adams’s strawberry hair had become a mousy, sue-your-stylist dirty blonde.) And now, with the still-shooting Batman v. Superman, Snyder has released three official stills of his stars in costume: Henry Cavill’s Superman rendered in the grimmest, darkest reds and blues imaginable, Gal Gadot’s Wonder Woman in what may as well be muddy brown, and Ben Affleck’s Batman photographed in black and white.

Does Snyder really deem comic book colors too juvenile for the big screen? If so, he’s not alone. There was a Twitter joke going around last week that imagined what Snyder might do with the comparatively colorful The Avengers:

Did you guys see Zack Snyder's early concept art for the Avengers: pic.twitter.com/FU52kVEram

… but then again, not every Marvel movie is a phantasmagoria of bright colors, either. Captain America may be the squarest of our screen superheroes, but his first film was shot with a muted period look that toned down Cap’s iconic red-white-and-blue uniform. The sequel, Captain America: The Winter Soldier, was even less colorful: The only vivid hue I can remember from its stubbornly ordinary color palette is Scarlett Johansson’s shock of unusual red hair.

Thank God, then, for this weekend’s Guardians of the Galaxy. Set in outer space, where even the sky is no limit, Guardians sends its heroes to planets full of brightly colored natives and lets them mingle in the middle of rainbow-tinged spacescapes. There’s so much dazzling color here that it’s a rush to find your childlike sense of awe and grandeur restored, and the film feels all the more confident for it, like the guy who shows up in the snazzy suit and immediately commands the room with his sense of style. It must be the most deliciously colorful comic-book movie since Dick Tracy.

Just look at this Guardians moment right here, if you don’t believe me: 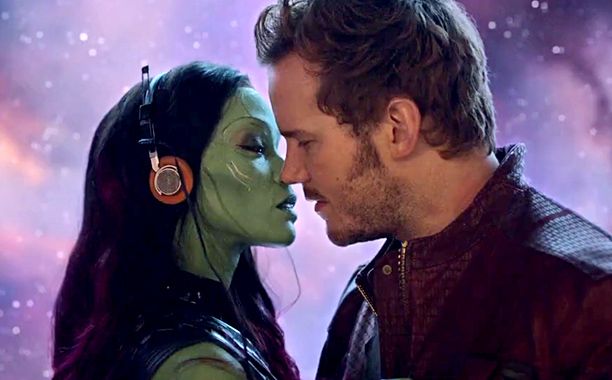 Yes, it’s a treat to see Zoe Saldana’s green Gamora wearing those orange headphones, but look behind her: Pink! Purple! When have those ever been the dominant colors in a superhero movie scene? Even the bad guys in Guardians of the Galaxy are rendered in a shade of brilliant, candy-colored blue, and according to director James Gunn, it was all by design. The look of Guardians is “very much a reaction to so many of the dark, brooding movies that have come out since Blade Runner,” he told me. “It’s not that I don’t like those movies, but I think we can be gritty and still have a lot of color as part of the film. It made it more fun to make, honestly.”

It’s also more fun to watch. Guardians of the Galaxy currently has a stellar 92 percent score at Rotten Tomatoes, and that’s fitting, since its bright colors feel as fresh as its rating. (On the other hand, if Zack Snyder photographed a red tomato in his trademark drab grays, would you still want to eat it?) Guardians is poised to become a box-office hit, too, and I hope that in the wake of its success, more directors will be inspired to fill their superhero films with the sort of rich, vivid colors that made people fall in love with these comics in the first place. The first Superman film, made in 1978, famously promised, “You will believe a man can fly.” If audiences were willing do that, then, I think the new Superman film can make them believe that Wonder Woman might wear a color, too.