True Blood, however, for better or worse, has never been very predictable. In fact, it’s one of this show’s biggest traditions to subvert expectation by painstakingly setting up a foregone conclusion only to go absolutely nowhere with it. True Blood’s main jam is to alight your imagination with endless possibility only to casually spin on its heel and march in a different direction. “Almost Home” continued that tradition by snuffing out two plotlines that seemed more important than they turned out: Violet’s revenge and Tara’s afterlife. Heck, not even the Jason-Jessica thread ended up where I expected it to. But where many people have railed against True Blood for wasting narrative opportunities, I was mostly impressed by the audacity here. You do you, True Blood — just keep doing it right to the very end. 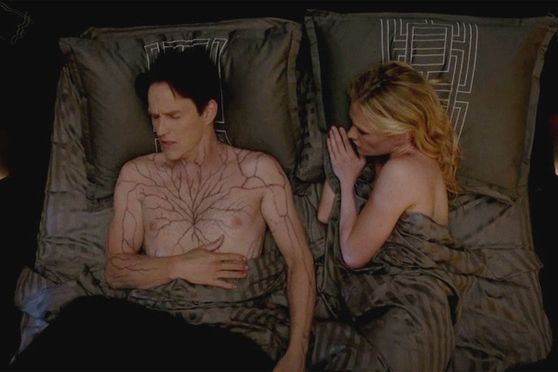 The race for the cure took up the most screentime this week, beginning with Eric drinking Sarah’s blood in the cold open (demonstrating that it really does cure Hep-V) and ending with Bill’s refusal to do the same when presented with the chance. When it came to the former, I was straight-up elated to see Eric get off his mopey deathbed this quickly (I truly thought his recovery would be a moment reserved for the series finale), but after Sookie put her life on the line to sneak Bill into the Fangtasia basement and feed off of Sarah, it was nothing less than infuriating when he pulled some drama queen shit and refused the cure. Ugh, and we were just starting to like him again! Out of all the lousy things Bill has done (well, at least, the lousy things that hadn’t been retconned this season), pulling this late-in-the-game diva stuff was probably the grossest. But then again, if his deathbed fever-dream about Sookie cradling his newborn son, A DARK VOID, was anything to judge by, Bill was definitely experiencing some mental problems. For her part, Sookie was her usual slow-to-comprehend self, except for a very amusing moment where Eric pretended to glamour her in front of the Yakuza and she did her best “I’m being glamoured” impression. Not saying I care much for the True Blood love triangle, but Sookie’s crackling moments with Eric in this episode served to make her scenes will Bill that much more dull and frustrating. 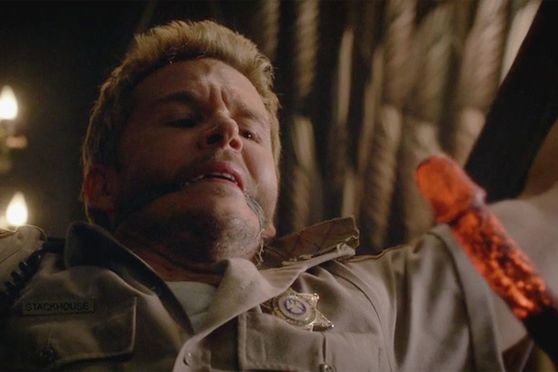 The quick and brutal end to Violet’s plotline was the episode’s biggest shocker. Almost her entire arc since her introduction last season has felt like the prelude to something important, so when she abducted Jessica last week, I assumed that we’d finally learned the purpose of this often-baffling character: To provide an antagonist for Jason to overcome in the service of his self-actualization. Except nope! Not really. Despite a truly alarming speech wherein Violet threatened sexual violence against Jessica, Adilyn, Wade, and Jason as revenge for a lifetime of dashed hopes, she was dispatched so easily and ingloriously (by Hoyt, a character whose arc had been concluded and forgotten for the past season and a half) that I laughed out loud at the anticlimax. I couldn’t decide what was more classic True Blood, the red-hot fire-poker dildo or the overall pointlessness of Violet’s arc. Either way, I was kept on my toes! Also, this was very satisfying:

But Violet’s death wasn’t completely pointless, it turned out, as it led to a genuinely surprising reconnection between Hoyt and Jessica. Like me, you maybe assumed that the entire reason for Lafayette and James to hook up was to clear the way for an eventual Jason-Jessica happily-ever-after scenario, but True Blood went one step further and seems intent on reuniting Jessica with Hoyt! Almost every moment they shared in this episode was infused with undeniable power, confusing as their circumstances might be to the both of them. She remembers everything about her time with him, and he seems to have at least some kind of emotional sense-memory where she’s concerned. So when Hoyt showed up to offer Jessica a bag of his blood to give to Bill, the complicated look of yearning in her eyes for that old boyfriend was truly heartbreaking to behold. Add to that Jessica and Jason’s mutual, profound realization that they’re just really good friends, and Jessica once again proved herself to be series’ most reliable beating heart. Her initial romance with Hoyt kept the early seasons grounded and heartfelt, so it should come as no surprise that this most grounded and heartfelt of True Blood’s seasons has resurrected their romance for endgame purposes. 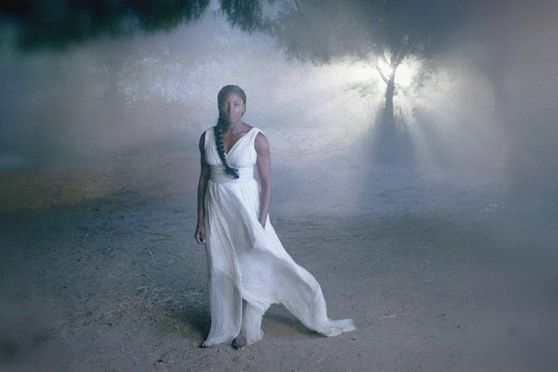 We also finally bid good-bye to Tara this episode, much sooner than I expected and with slightly less fanfare. Again, my expectations dictated that her death would have a greater meaning in the True Blood universe, that it would perhaps set up a concept of vampire afterlife, or that she was leading her mother to become essential to vampire-human relations somehow. But nope, as it turned out, Tara’s ghost was really just trying to apologize for not having done more to protect her mother from her abusive father. In one of the episode’s weirdest scenes of all time, Lettie Mae and Lafayette convinced the reverend to get high on V with them, at which point they wandered around Tara’s childhood home (as the current homeowners looked on awkwardly). We then witnessed a particularly harrowing childhood memory in which Tara’s birthday party had been crashed and destroyed by her abusive father, and she nearly shot him in the head before instead running outside to bury the gun in the yard. After seeing this, Lettie Mae and Tara finally and definitively apologized to each other and forgave each other for having endured so many “bad things.” Over the previous six seasons, Tara’s character had whiplashed between maddening and sympathetic, so it was incredibly pleasing to see her journey end on such an emotional, personal note. It’s almost enough to forget how undeniably tragic it all is! 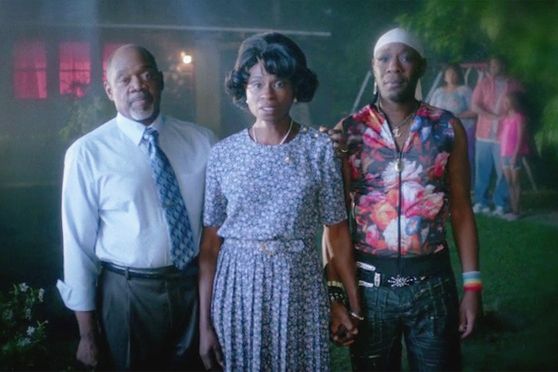 Any time a mid-season episode prematurely clears up endgame plotlines should be considered a blessing; what good is a finale that we see coming? “Almost Home” felt like a table-clearing, an adjournment of old business before the main event. Or, at least, that’s what my TV-watcher expectations tell me. At this point, it’s anybody’s guess what will unfold in the next two episodes, and if this season has been any indication, it’ll be less about storytelling pyrotechnics and more about fireworks of the heart. It’s that distinction that will be True Blood’s most satisfying surprise.