It’s been a while since we had new Taylor Swift material — almost two years, which is convenient, because Taylor Swift releases an album every two years in the fall. Add that fact to her upcoming promotional appearances (Fallon, plus a Yahoo! live-stream) and the new music she promised by September, and … yeah, we’re probably getting a new Taylor Swift album very soon. If you know anything about Tay, it’s that musically, she pulls directly from her real life. So let’s take a walk through what’s happened since Red and guess what songs she’ll draw from the experiences. We’ve all been here before.

Life event: She broke up with that Kennedy.
Song potential: What’s the opposite of “Begin Again”? Yeah, that song.

Life event: She got back together with Harry Styles.
Song potential: “Butterflies,” a playful nod to Styles and his slew of embarrassing tattoos.

Life event: She broke up with Harry Styles. See: this photo.
Song potential: “Anchor,” a ballad about how Harry dragged Taylor’s spirit down to the bottom of the ocean.

Life event: She got her feelings hurt by Michael J. Fox.
Song potential: “Back to Our Future,” an ‘80s-inspired song about going back in time and dumping Marty McFly.

Life event: She sang with Prince William.
Song Potential: “Prince Charming,” one of those weird “Taylor imagines someone else’s interior life” songs (see: “The Lucky One”) about how it’s hard to be royal.

Life event: She was on New Girl.
Song potential: “Who’s That Girl?” A confessional about the challenges facing young actresses in Hollywood featuring She & Him’s Zooey Deschanel on the ukulele.

Life event: She became BFFs with Lorde.
Song potential: A duet of Lorde’s “Team” at next year’s Grammy Awards.

Life event: She maybe dated the CEO of Snapchat, LOL.
Song potential: “Gone in a Snap,” a mid-tempo track about a short-lived romance.

Life event: She charmed at the Country Music Awards.
Song potential: “You Need Me (More Than I Need You),” the opening number to her gig as next year’s host of the CMAs.

Life event: She headbanged at the Grammys.
Song potential: “Let Your Hair Down,” an exclusive track for Pantene Pro-V.

Life event: She moved to Tribeca.
Song potential: “Mean 2.” Sample chorus: “Some day / I’ll be / the owner of an entire Manhattan block / but all you’re ever gonna be is mean.” 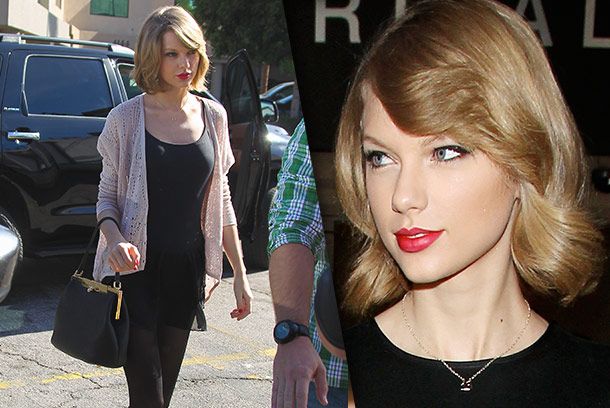 Life event: She became BFFs with model Karlie Kloss.
Song potential: “Vogue,” a remake of the Madonna classic, released simultaneously with an actual cover of Vogue on which she and Karlie appear, arm in arm.

Life event: She hung out with Ina Garten.
Song potential: “How Easy Is That?,” a sassy number about dumping a dude to spend more time pursuing home arts.

Life event: She got a new kitten and she named her Olivia Benson.
Song potential: Taylor Instagrams a 15-second remix of the Law & Order theme song, but sung with autotuned meows. 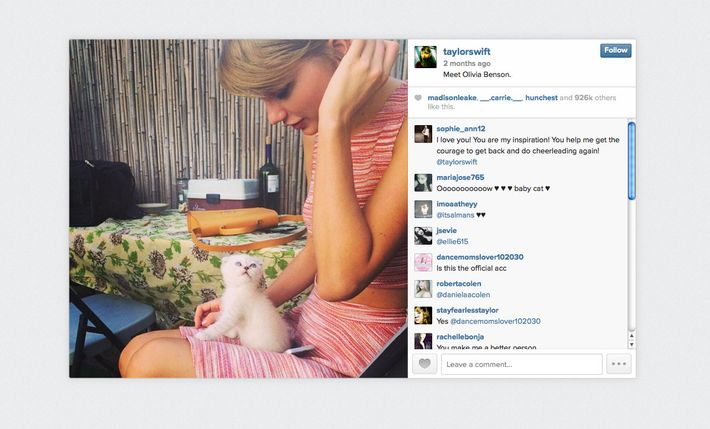 Life event: She gave her good friend Ed Sheeran a homemade Drake cross-stitch.
Song potential: “Cross My Heart,” a ballad about the quiet joys of a night at home, drinking green tea, watching Netflix, and working on a cross stitch.

Life Event: She had that July 4th party with all those famous people.
Song potential: “Family Portrait,”  a girl-power anthem about the strength she finds in her Sisterhood of Oversize Sweaters.

Life event: She wrote a WSJ op-ed.
Song potential: “A Nice Garden.” It’s like “We Didn’t Start the Fire,” but it’s just Taylor Swift listing all the exotic plants she grows at home.

Life event: She was in The Giver.
Song potential: “Memories.” Sure, it’s from Cats, but it’s relevant.

Life event: This goat.
Song potential: Taylor gets a pet goat, names it Trouble, goes vegan. Writes a song called “Stripes” about the plight of animals. All proceeds go to PETA.

+Comments Leave a Comment
What Will Taylor Swift’s New Album Be About?