Doing sketch comedy on live television while pregnant is like wearing a sombrero. You can pretend to be a serious person, but the giant hat gives you away. I have spent an inordinate amount of time on camera being pregnant. Sometimes it was real and sometimes it was not. When I shot the film Baby Mama I wore a fake belly. It was shaped like a watermelon cut in half and it was strapped onto my body with flesh-colored Velcro. I would adjust it to where it felt comfortable and then giggle at the sight of it under my clothes. I would rip my belly off at lunch and the satisfying Velcro rip would announce that my pregnancy was over. Many times I patted my sweaty and firm stomach and thought about how cool it was going to be when I really was pregnant. 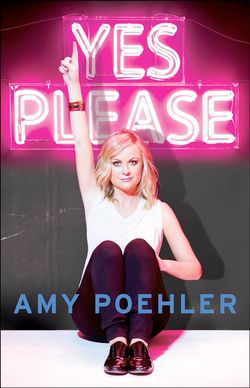 When I was first pregnant with my son Archie, I didn’t tell anyone, as you are supposed to keep it secret. It’s a really magical time, those first few weeks. It almost makes you wish you didn’t have to tell anyone, ever. You could just watch your belly grow bigger, and no one would be allowed to ask you about it, and you would have your baby and a year later you would allow visitors to finally come and meet your little miracle. I was halfway through my seventh season at SNL, and no one really noticed my nausea or extreme tiredness. That was par for the course at a job that made you stay up all night long and eat cold mozzarella sticks you had to buy yourself.

My ob-gyn was a wonderfully old Italian man I will call Dr. G. Dr. G had delivered Sophia Loren’s children. I know this because everyone from his receptionist to the other doctors in his practice liked to tell me this fact. I was happy to hear that Dr. G was comfortable with beautiful and famous vaginas. I don’t consider myself beautiful or famous, but my vagina certainly is. Everyone knows this.

Dr. G was European and old-fashioned in all the right ways. He reassured me I didn’t need an amniocentesis by reminding me that Italian women don’t worry about that sort of thing. I imagined Sophia Loren laughing off the idea of a needle being driven into her pregnant belly as she sipped an espresso. Dr. G dressed in stylish suits and moved very gently, squirting cold gel on my tummy while whistling a slow tune. He didn’t have a 3-D imaging machine. He had a utilitarian black-and-white deal that showed you a blurry picture of what looked like a big-headed frog. “Your baby is very smart,” he would say to me and my husband, Will Arnett. “You are doing everything right. Please drink one or two glasses of red wine a night.”

The last week of SNL before Archie arrived was incredibly exciting. The 2008 presidential race was almost a dead heat and the entire year leading up to the election had been a magical time to work on a live satirical sketch comedy show. Everything felt electric. The audience knew the ins and outs of every political story, and a lot of it had to do with what Saturday Night Live was doing.

We could barely keep up with the daily goodies and produced four prime-time Weekend Update Thursday specials during September and October. I was eight months pregnant and did fifteen live shows in thirteen weeks. Everyone came on. I met then presidential candidate Barack Obama while I was dressed as Dennis Kucinich. Maya was dressed as Barack Obama at the time, so the introduction might have been slightly more embarrassing for her. We were doing a sketch about how hot Kucinich’s wife was. That’s how much America was paying attention! Then Tina played Sarah Palin for the first time and blew the roof off the joint.

The anticipation of Tina playing Palin was so fun to witness, and she explains it well in her book Fifty Shades of Grey. She totally took on what was expected of her and it was awesome to stand next to her as she killed. The sketch that night dealt with Hillary Clinton coming to terms with the possibility of a Vice President Sarah Palin. It dealt with fierce competitiveness in politics. It dealt with power and entitlement. It dealt with the way society forces women to define themselves and compete against each other. It tackled old theories about Madonna vs. Whore and Slut vs. Shrew. But most importantly, it was really funny. That sketch was written by Seth Meyers. Tina and I added jokes. SNL and now Late Show with Seth Meyers producer Mike Shoemaker wrote the legendary line “I can see Russia from my house.”

I remember standing onstage and it being one of the few times that something felt perfectly whole. Archie did flips in my stomach each time the audience clapped. It was the closest to what I imagine it feels to write a hit song.

Archie was due on a Saturday. The show that night would be Jon Hamm’s first time hosting. The musical guest was Coldplay. The Friday before the show, I was in the middle of rehearsing a Mad Men parody, and I called to confirm my three P.M. appointment with Dr. G. The receptionist answered the phone crying. She told me Dr. G had passed away from a heart attack in his sleep. I burst into tears so loudly and violently that I think water was squirting out of my eyes like in a Cathy cartoon. Nothing is more horrifying than a giant pregnant lady sobbing. Everyone got very quiet. I hung up the phone and told Jon and the hair and makeup people that my doctor had just DIED. And I was DUE TOMORROW. And that I knew it seemed like a weird punch line, but my beloved and dear Italian grandpa was not going to be able to help me. I felt so terrible about the fact that all I was thinking was “What about meeeeeee!” I cried and cried in my Mad Men dress. Jon Hamm held me by the shoulders and looked at me and said, “I know this is very sad, but this is a really important show for me, so I’m going to need you to get your shit together.” This made me laugh so hard I think I peed. Going from crying to laughing that fast and hard happens maybe five times in your life and that extreme right turn is the reason why we are alive. I believe it extends our life by many years.

I told everyone at dress rehearsal. It freaked them out. At three P.M. I went to Dr. G’s office and was met by his grieving colleagues who had worked with him for decades. One of them, the lovely Dr. B, examined me and told me I shouldn’t worry. Nothing was happening and I would probably deliver a few days late. He had already treated and met with Dr. G’s other patients and would spend the next twenty-four hours delivering five babies. He was kind and professional, but it was extremely weird. I went back to SNL, where I stayed until two A.M. Maya and Fred Armisen were doing bits on the main stage pretending to be robot versions of themselves, and I laughed and laughed and for the millionth time thought about how lucky I was. Eddie the security guard walked me to the car and asked me how I was doing. “I’m tired,” I said. I went home and got in bed. It was three thirty in the morning and I put on my favorite TV show, Law & Order, to go to sleep. I heard the “bam bam” sound effect in the opening credits and my water broke.

Archie was born Saturday, October 25, at 6:09 P.M., just about when we would have been getting ready to do our first run-through for “Weekend Update.” He was, and remains, perfect. My whole world cracked open and has thankfully never been the same since. I watched Saturday Night Live that night, drugged to the gills. I watched scenes that I had rehearsed hours before. I watched Maya and Kenan sing a song to me, and Seth tap my spot at the “Update” desk and tell me they loved me. I cried and cried and then laughed and laughed. I added a few more years to my life. I kissed Archie’s giant head, which was shaped like a beautiful balloon. Today we wear the same size sombrero. He is six.