Tonight’s season premiere of Bob’s Burgers begins inside Mr. Frond’s office. Standing across from him are Bob, Linda, Tina, Gene, and Louise. All the Belchers, back for another hilarious and zany and heartfelt and very likely perfect season. Beside them are two characters I don’t immediately recognize but eventually learn are Courtney Wheeler (a.k.a. Gene’s ex, the Necklace Sucker) and her father (a.k.a. the father of Gene’s ex, the Necklace Sucker). Both parties are angry, Mr. Frond is attempting to understand the problem, and wait, what’s happening with Tina’s hair? Are those shoulder pads? Oh my God, Tina is in shoulder pads. 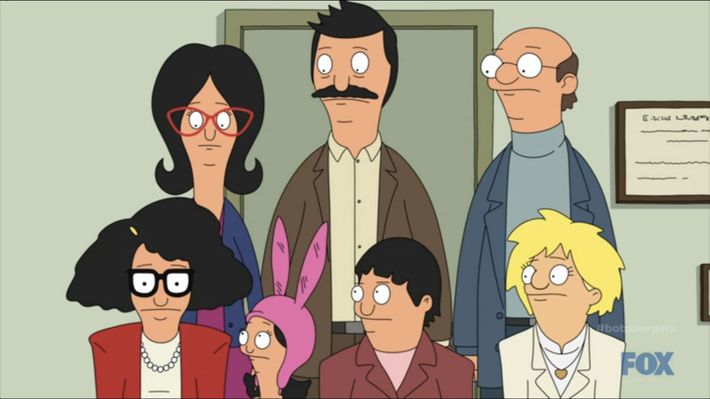 To make sense out of the shouting and the screaming and the shoulder pads, Gene begins explaining what the problem is. In his version of the story, an announcement over the Wagstaff School PA system asks its “creative, talented, and musically brilliant” students to submit their ideas for a fall musical. It also announces that today’s lunch is tacos. Considering himself creative, talented, musically brilliant, and a fan of tacos, Gene decides to use this as an opportunity to finally produce the Die Hard musical he wrote after first seeing Die Hard and thinking, “Why is no one singing? Why is no one dancing? What’s wrong with Hollywood?”

Gene claims he let Courtney read the script when they were still dating and that it inspired her to write her own musical based on a beloved ’80s movie. Working Girl is, he asserts, the “sassy sister film of Die Hard.” But Courtney claims Gene is not, in fact, the inspiration for her musical but that he is merely a jealous and gluttonous taco fan. Her father convinces the drama teacher that he can get Carly Simon to show up to the performance.

The 10 Best Bob’s Burgers Songs, As Picked by the Show’s Writers
Watch Every Time Linda Says ‘All Riiight’ on Bob’s Burgers

Back in Frond’s office, it’s Louise’s turn. (Ah, so that’s how this episode is going to be structured.) She leads her siblings into the boiler room behind the boiler room underneath Wagstaff School and announces her plan to have Gene put on his production of Die Hard: The Musical on the same night as Courtney’s Working Girl: The Musical. They’ll rehearse secretly, charge $5 a head on the night of the show, and get rich. It’s a very good plan — classic Louise — but it’s also a very hot room. This will probably become an issue. As a reminder that we’re watching Louise’s exaggerated version of the story, Tina and Gene congratulate their sister by lifting her up on their shoulders and dancing as though they were about to be served a meal by a talking French candlestick.

But back to Gene. He goes on to explain that he used Courtney’s reject pile to cast his show. Regular-Sized Rudy’s asthma may have cost him the Harrison Ford role in Working Girl, but he’s good enough for Die Hard — as are Zeke, Ollie, Andy, and Darryl. And now: Tina. Oh, Tina. It’s so great to see her again. And hear her again. She explains the hair and shoulder pads by informing Mr. Frond that she had been cast in Courtney’s musical and would be playing Katharine Parker, the villainous and bedridden Sigourney Weaver character. We’re then treated to a few teaser lyrics from both musicals:

“Why did you throw that corpse on my car?”

It’s getting hot in the boiler room behind the boiler room, and now Gene’s becoming more and more dissatisfied by his cast of rejects. After screaming at Andie and Ollie (“FBI AGENTS DON’T HOLD HANDS!”), he decides to fire everyone in the cast and perform Die Hard: The Musical on his own as a one-man show.

Cut back to Mr. Frond as he looks up and says, “Now I come to the part where I blame the parents.” Bob and Linda claim that they had no idea about Gene’s musical until the night of the performance.

Linda’s story begins on opening night, just after she discovers a flyer for the Die Hard musical that Louise had snuck into her pocket. As deafeningly supportive as usual, Linda can hardly contain her excitement about seeing two of her children in musicals on the same night. This leads me to the best line of the episode, which Linda utters after finding Tina in costume before the performance.

The second-best line of the episode comes soon after.

Bob: Working Girl is the thing that inspired me to be anything I wanted to be!

Louise: And so you’re this? 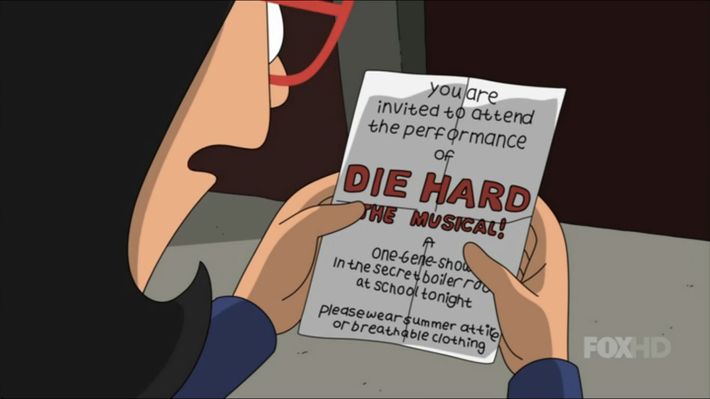 We’re then treated to a back and forth of moments from each musical. There’s the lavish production of Working Girl (complete with a moving Staten Island Ferry and the song “Coffee’s All I Get”) on the stage, and a pathetic production of Die Hard (complete with a paper taxi and the song “I’m Grubin’”) in the boiler room behind the boiler room. While watching Gene’s one-man fight as both McClane and Gruber, Bob says, “I have to admit, watching one person do all of Die Hard is a little bad.” While watching Tina and Jimmy Jr. sing a song that contained the lyrics, “I’ve got a head for business and a bod for sin / Well I’ve got both so count me in,” I say, “Have I dreamed this before?”

Eventually, Mr. Frond discovers the illicit rival production and shuts it down — bringing us out of the flashbacks to the present. He decides to punish both parties by canceling the two shows and banning musicals from Wagstaff School forever. Gene and Courtney make up and offer to combine the two shows and perform them onstage. Though he initially rejects their suggestion, Louise convinces Mr. Frond that such exemplary conflict resolution could potentially win him a “Conflicty.” Desperate to be recognized for his work, he agrees. We’re then treated to a wonderfully bonkers collection of moments from the resulting mash-up musical (Work Hard or Die Trying, Girl) that contains lyrics like, “Tess McGill can’t let a group of terrorists ruin her dream.”

And finally (because this was technically his episode), we end with a comment from Gene.

“I smell a Tony. Which is also what I happen to call my farts.”

I can’t wait for the original cast recording.