You have read about the in-jokes, the boyfriends, the inspirations, and even the actual songs. But we’re still going! Now Vulture presents a few thoughts about the 1989 album cover.

1. It’s a Polaroid* picture for a reason.
The week before the first single from 1989 dropped, Swift fake-leaked a photo on her Instagram feed showing an ‘80s Polaroid camera and a couple of boxes of film. A few sites briefly guessed that she was going to call the album Polaroid, and given that she has posed with one of those cameras before, she appears to be an enthusiast when it comes to this weird, old method of picture-taking. It does seem to fit with her brand: Her songwriting is about minutely documenting her life story, and until about 2002 or so — not to mention in 1989 — Polaroid pictures were a kid’s best way of doing that. 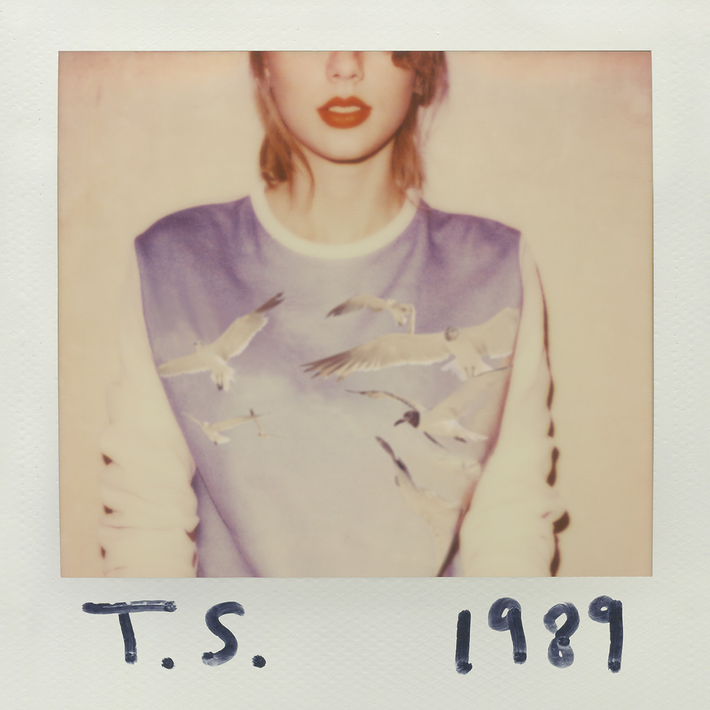 2. She didn’t fake it, but she definitely messed with it.
It doesn’t look like a digital photo that’s been put through a filter — it’s almost surely made with real analog film. But she did futz with the shape and proportion of the borders to fit a standard square album cover (never mind that everyone’s going to download it). Drop a real Polaroid next to it and you’ll see. Interesting, also, that her most electronic album to date has the most analog kind of picture — one of a kind, hard to copy — on its cover.

3. That asterisk: It’s not Polaroid film.
Polaroid stopped making its signature product in 2008, and production was shortly thereafter restarted by a small company called the Impossible Project. This looks like Impossible’s film, with its yellowish tone, high contrast, and distinctive palette. Charming as it is, Impossible’s project is a pain in the neck to use: If you shoot out in bright sun, you have to shield it as it ejects from the camera, otherwise your photo washes out. It also takes about 20 minutes to develop. This suggests that Taylor is not only an enthusiast; she is willing to put up with it, in order to create the perception of an effortless homey snapshot.

5. Why did Taylor cut off the top of her head?
The photo ends at nostril level, a framing is not only commonplace but approaching cliché levels in the book business; this Goodreads list notes 449 recent covers that look more or less the same way, their authors ranging from Erica Jong to Jane Austen. Quite a few commentators have noted the iffy-at-best gender-and-power dynamics at work there. The chopped-off face also has (accidental) precedent in ancient art, which can be evocative despite, or even because, the face is incomplete. Consider one of the great pieces in the Metropolitan Museum of Art’s Egyptian collection, this stone head from the 18th dynasty: Would your eye linger as long if the whole face were there? Probably not.

Half-headlessness is somewhat a surprising move for a young celebrity, whose face is usually a salable part of his or her personality. On the other hand, Taylor did show her red lipsticked pout, arguably her most recognizable feature.

6. That sweatshirt!
Questionable! Definitely anti-fashion fashion. But you can get your own, for $59.99 plus shipping.

beloved 22 mins ago
Quinta Brunson’s Mom Didn’t Understand Her Job Until Abbott Elementary “I showed [my mom] a Buzzfeed video and she was like, ‘What is this?’”
fridge fixer 3:26 p.m.
Jeremy Strong Practiced His Dad Jokes on Anne Hathaway The two star as fictional versions of James Gray’s parents in Armageddon Time.
overnights 11:08 a.m.
RuPaul’s Drag Race All Stars Recap: Monsoon Season Jinkx has reached the apex of what it means to compete in Snatch Game.
cannes 2022 11:01 a.m.
George Miller Returns to Cannes With a Freaky, Maximalist Fairy Tale Three Thousand Years of Longing is a fairy tale within a fairy tale (about telling fairy tales) that feels like Miller’s answer to The Princess Bride.
By Rachel Handler
box office 2:01 a.m.
Everything Everywhere All at Once to Beat Uncut Gems As A24’s Biggest Hit At the domestic box office in this universe, at least.
hiatuses 12:05 a.m.
Doja Cat’s Tonsils Have Canceled Her Summer Performances, Including Lollapalooza She’ll be taking time off to recover from surgery.
timelines Yesterday at 9:57 p.m.
A Timeline of Travis Scott’s Post-Astroworld Public Return His previously postponed collaboration with Nike is back on.
farewells Yesterday at 8:32 p.m.
Kate McKinnon, Aidy Bryant, and Kyle Mooney Are Reportedly Leaving SNL Joining Pete Davidson in calling this season their last.
thank u next Yesterday at 6:11 p.m.
Pete Davidson Leaving SNL, Ending Longest Public Relationship Sources say the season-47 finale will be his last appearance.
protests Yesterday at 5:34 p.m.
Cannes Film Festival Removed Activist Protesting Sexual Violence in Ukraine The naked protester interrupted the red-carpet premiere of George Miller’s Three Thousand Years of Longing.
that's gossip Yesterday at 5:11 p.m.
This Newsletter Just Revealed DeuxMoi’s Probable Identity Who gossips the gossip girls?
chat room Yesterday at 4:00 p.m.
Judd Apatow on Documenting the Legacy (and Fart Jokes) of George Carlin Talking with the filmmaker about his HBO docuseries on the legendary stand-up.
cannes 2022 Yesterday at 3:18 p.m.
Chie Hayakawa’s Plan 75 Quietly Devastates Cannes The heart-wrenching dystopian film, about a government program for euthanizing senior citizens, marks the arrival of an exciting new writer-director.
overnights Yesterday at 2:37 p.m.
RuPaul’s Drag Race All Stars Season-Premiere Recap: A Winning Twist This season is already one of the best we’ve seen from the franchise, and it shows no sign of slowing down.
influences Yesterday at 2:23 p.m.
Alex Garland on Attack on Titan, Notting Hill, and More of the Influences on Men “I just think life is strange, and I’m trying to reflect how strange life feels to me.”
By Katie Rife
rip Yesterday at 2:03 p.m.
Bob Neuwirth, Folk-Music Fixture and Bob Dylan Confidant, Dead at 82 He played with Bob Dylan and co-wrote Janis Joplin’s “Mercedes Benz.”
overnights Yesterday at 1:59 p.m.
For All Mankind Recap: The Unbearable Lightness of Being (on the Moon) The tensions between dreams and reality are woven into nearly every moment as the upcoming missions loom.
movie review Yesterday at 1:59 p.m.
I Regret to Inform You the Chip ’n Dale: Rescue Rangers Movie Is Pretty Good John Mulaney and Andy Samberg voice the animated chipmunks in a half-subversive riff on Who Framed Roger Rabbit.
By Alison Willmore
chat room Yesterday at 1:30 p.m.
Touring With Olivia Rodrigo Is Great, But Holly Humberstone Is Still a Homebody “Taking a step away from it, I’m like, ‘Oh, I miss rubbish, dirty, gross, London!’”
overnights Yesterday at 1:22 p.m.
Conversations With Friends Series-Finale Recap: Here You Come Again Did Nick really call by accident? Do we even believe in such accidents?
More Stories