When we saw Ian Roach’s re-creation of the cast of Friends in The Sims 4, our imaginations ran wild. Friends ended in 2004, but it left us with so many questions: Which Friend can survive the longest without food? Or a bathroom? If you locked them along together in their apartment, how long would it take Joey and Chandler to fall in love? We had Roach run a few simulations and now you’ll never have to wonder again.

Experiment No. 1: The One Where They Have to Hold It In
We asked Roach: If you lock the six Friends together in Monica and Rachel’s apartment and block their access to the bathroom, which character would be the first to pee on the floor? (Apparently, Sims don’t poop.) This is what happened.

Around the four-hour mark, they all get pretty uncomfortable.

Who’s the first to let it go? In classic Ross style: Ross. 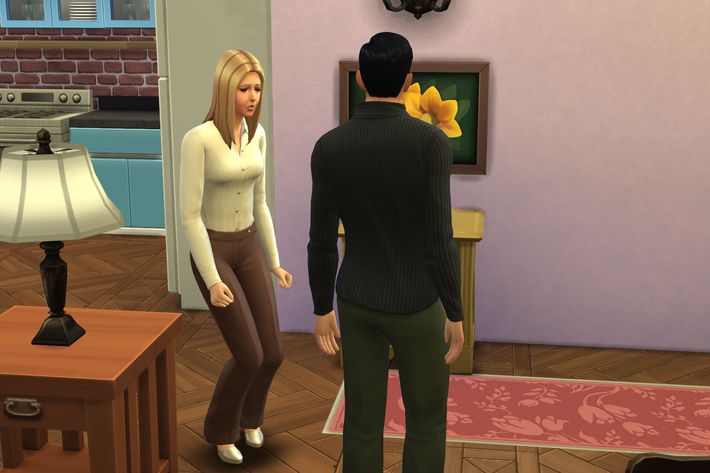 And with Ross having broken the seal, the five others feel free to release in unison. That is apparently what friends are for. 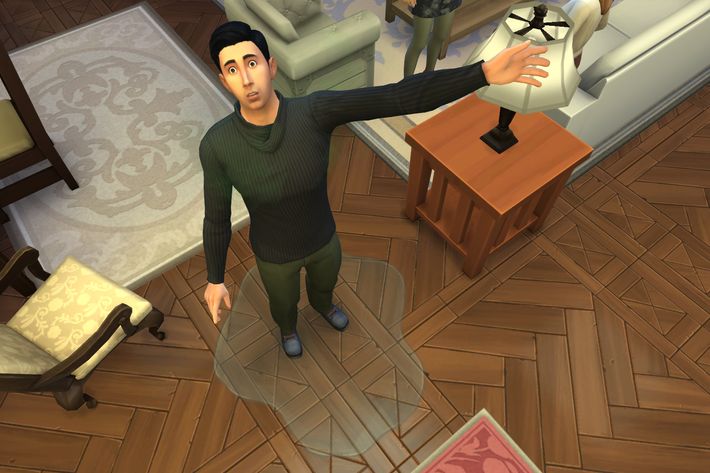 Someone (Monica?) should have really put some newspaper down. 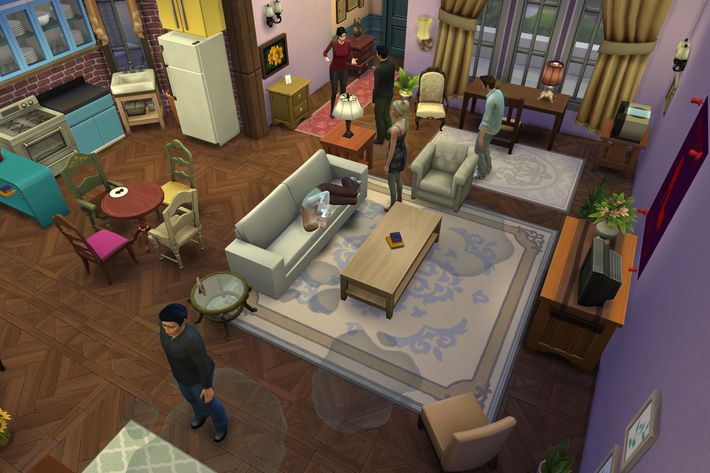 Speaking of Monica, guess who has to clean it all up?

Experiment No. 2: The One Where They All Starve to Death
Which Friend can live the longest without food? Let’s find out.

Day 1: We locked all six Friends in one apartment and deleted their fridge. 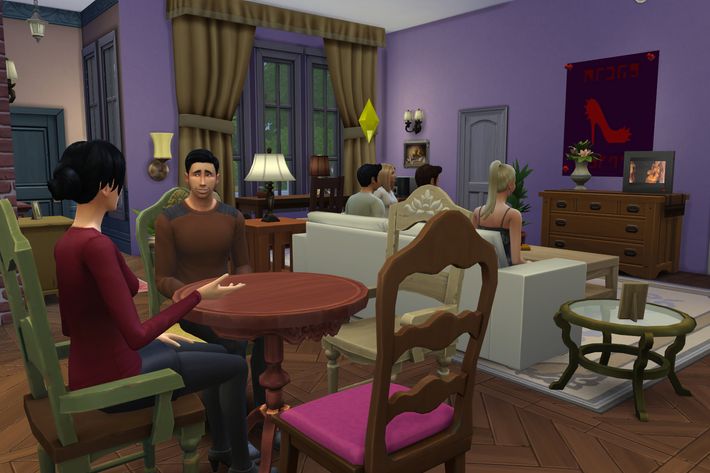 All is well until the hunger pangs start to set in … 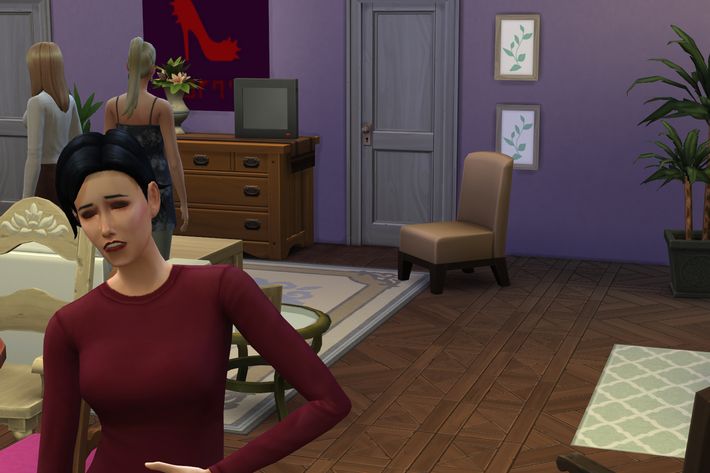 Day 2: Stuck inside, no one has enough energy to get to the mailbox to pay the bills. So the power company shuts off their electricity.

Day 3: Cold and starving, Ross is the first to go (again).

Within minutes, the rest of the gang starts to fall … 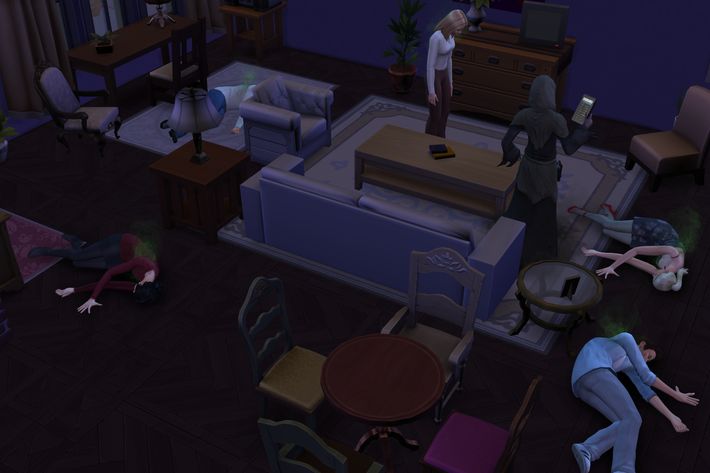 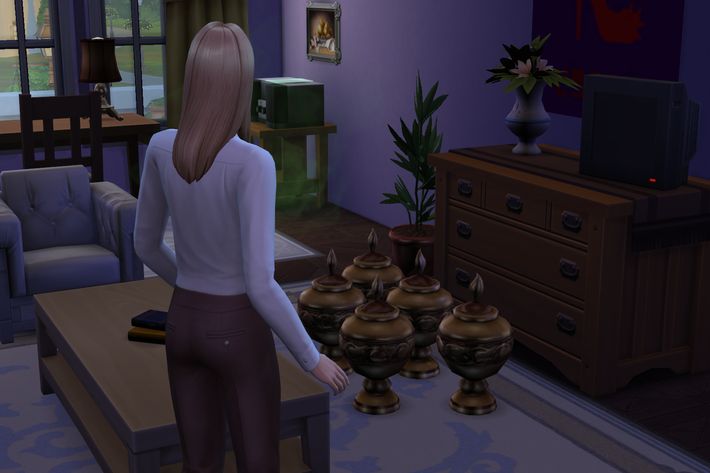 Experiment No. 3: The One Where They All Love Rachel
We asked Roach: What if all three male Friends were in love with Rachel? Would she still pick Ross? 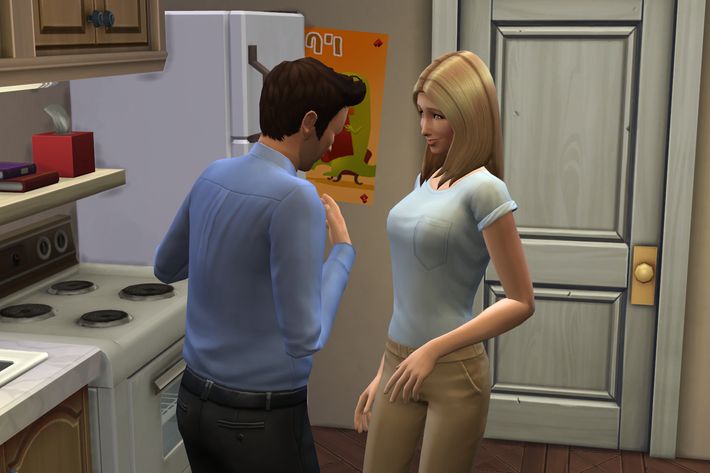 Our answer: She would, but she would also choose Chandler and Joey, too. (Turns out that Sims Rachel is kind of a floozy.) It’s cool! Ross is handling it all very well.

Experiment No. 4: The One Where Joey and Chandler Fall in Love
Say Chandler and Joey were locked in their apartment alone together — how long would it take them to hook up? 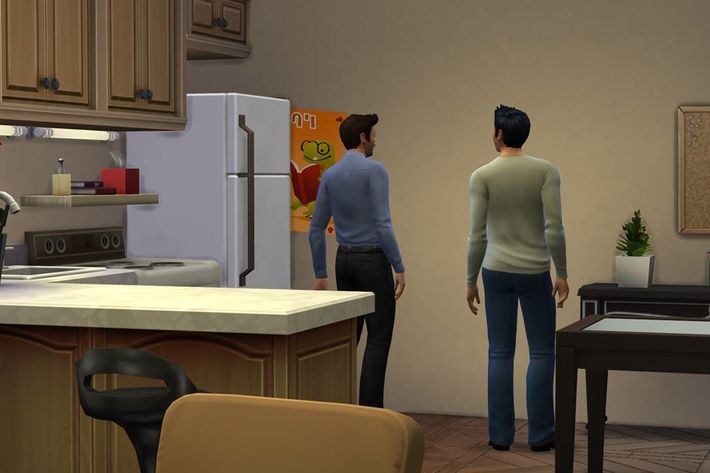 What else is there to do but accept fate and settle in. 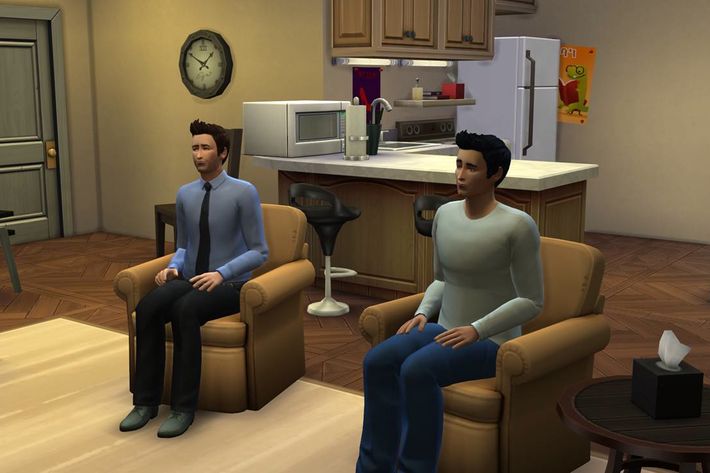 Day 2: The sexual tension is palpable. 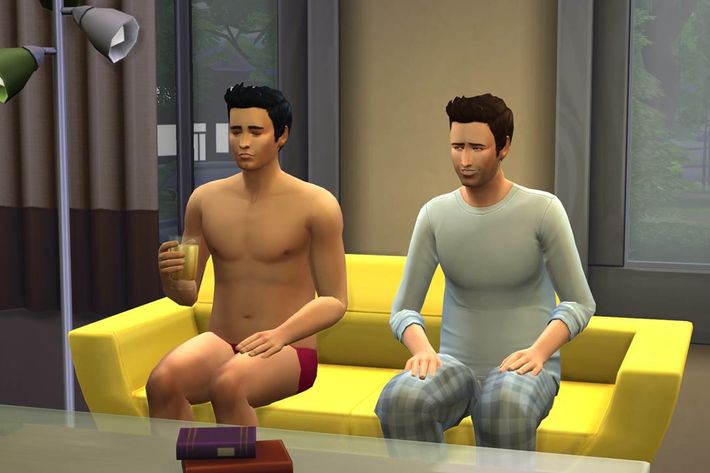 And personal boundaries start to fade. 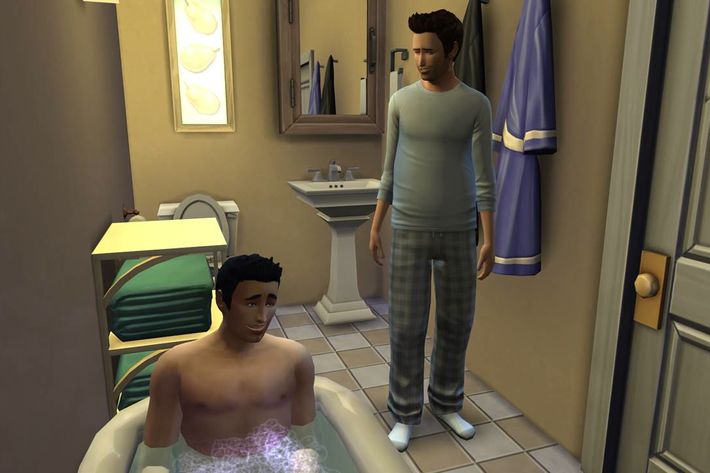 (But when they do, the rest of the Friends are baffled.) 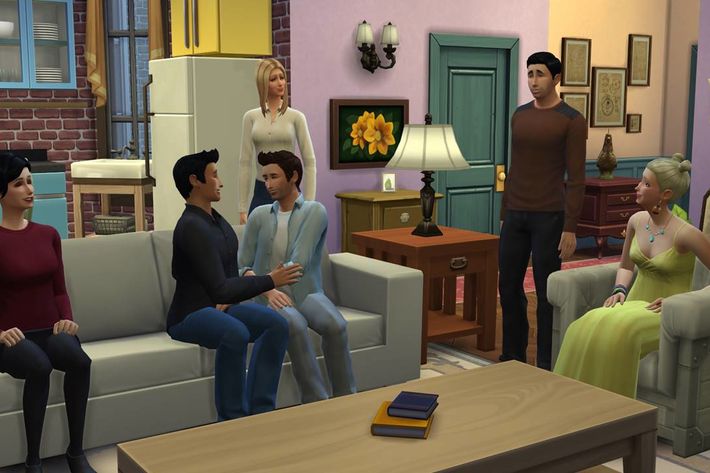 Experiment No. 5: The One Where Ugly Naked Guy Visits
Ugly Naked Guy, the Friends’ nudist neighbor, was seldom seen on-camera. What would happen if he spent some quality time with the main cast? 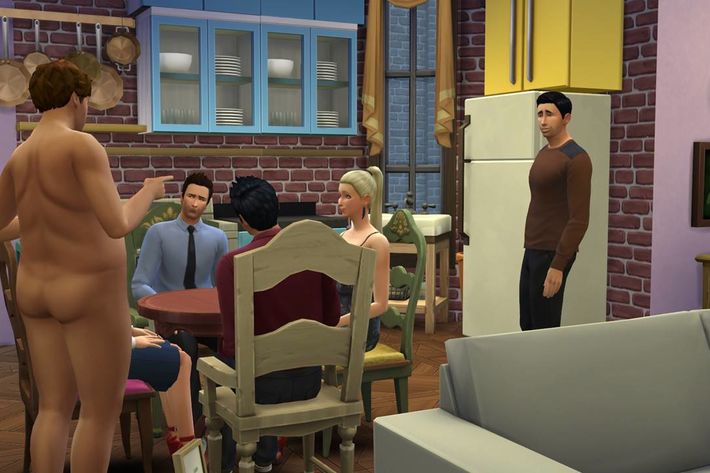 So far, so good. There’s a dance party!

At first, Monica is a little hesitant … 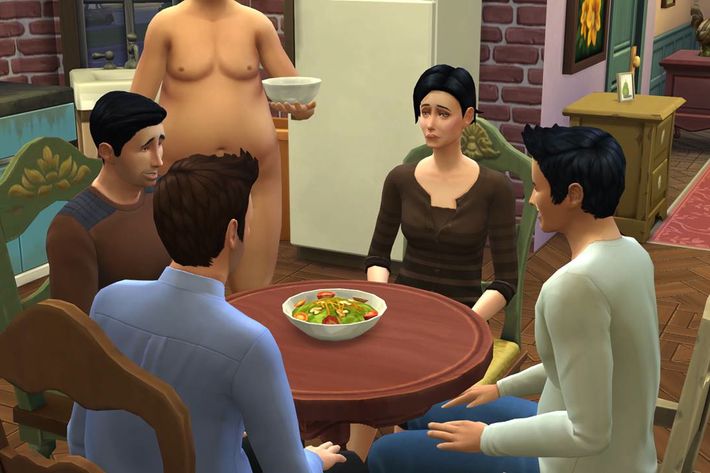 … but she soon starts to warm up to him. 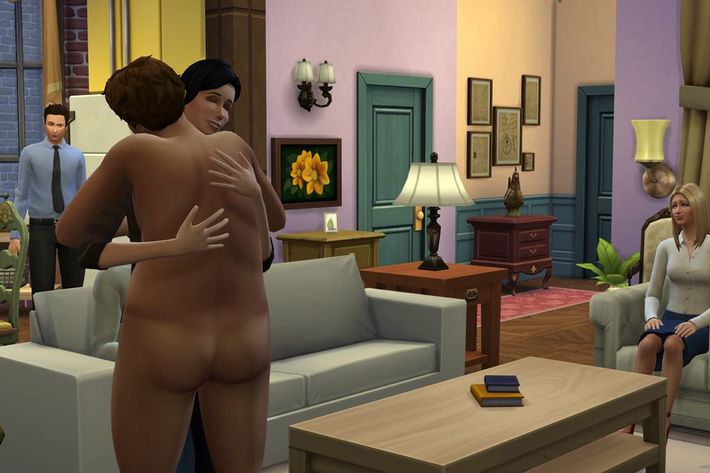 Turns out that Ugly Naked Guy isn’t really a one-girl kinda guy. He soon sets his sights on Phoebe. 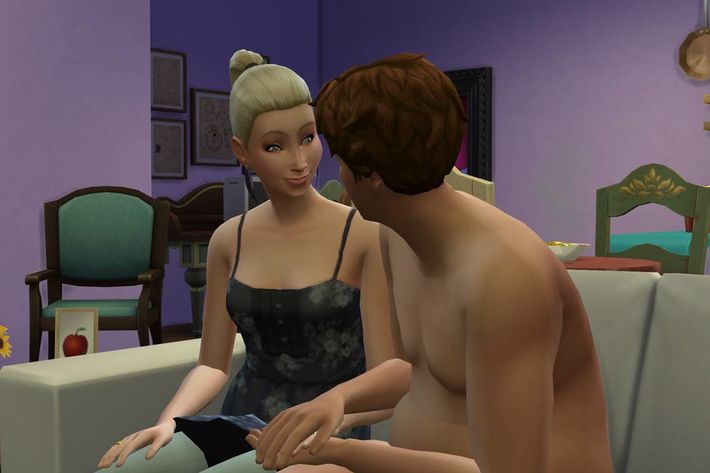 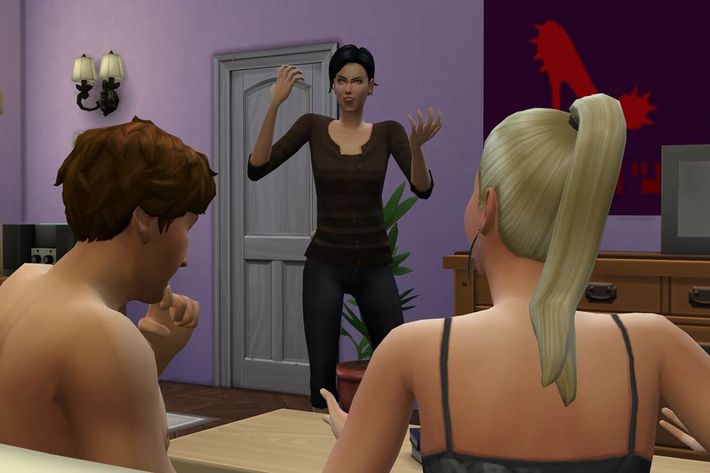 Gloves off, who wins the fight? Phoebe.

Having won the fight, Phoebe wins her man. 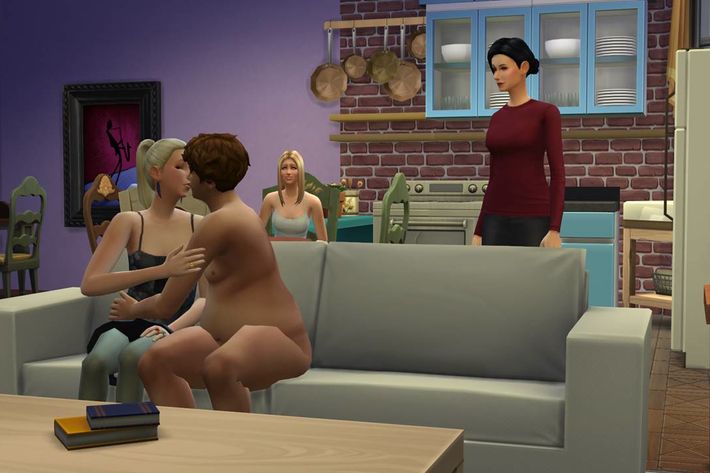 Experiment No. 6: The One Where They Grow Old and Have Kids
What would Emma look like all grown up? What if she got a little brother? And what would Chandler and Monica’s children look like? 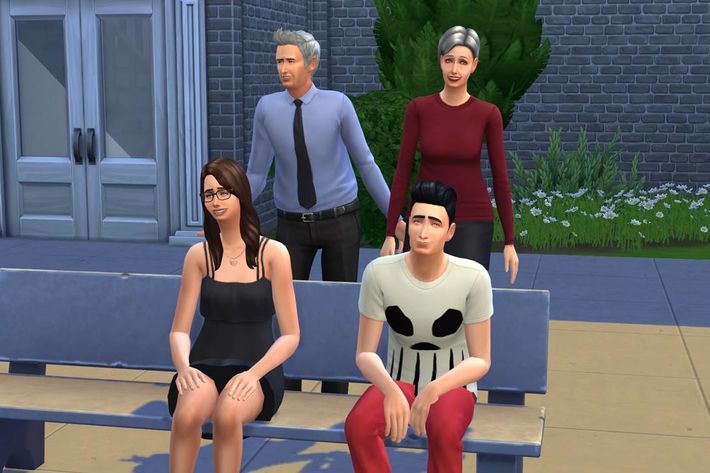 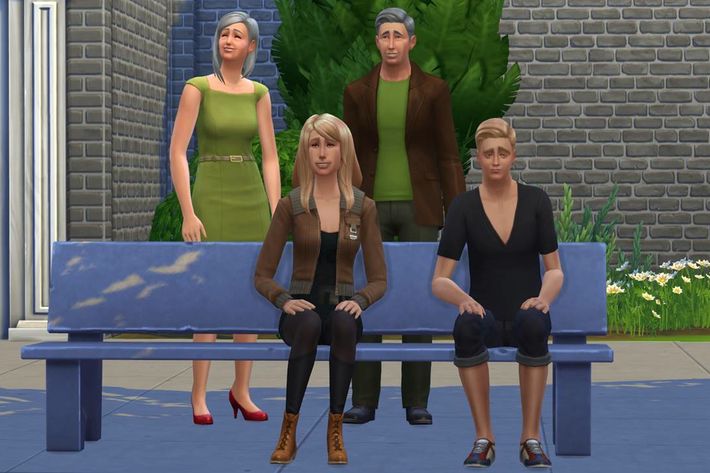 And you guessed it: Everyone’s still friends. 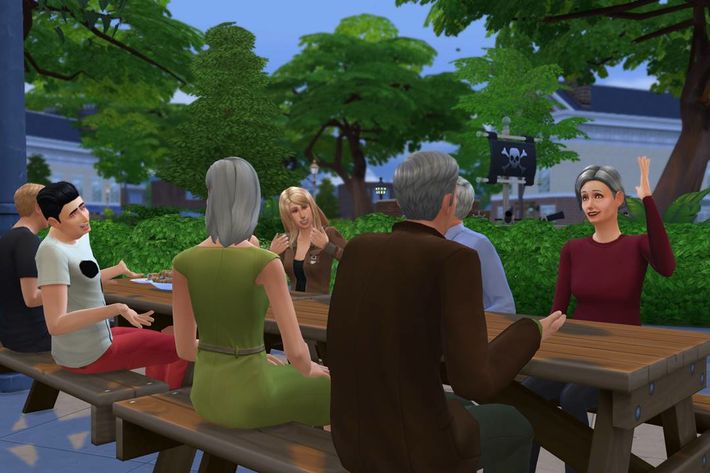 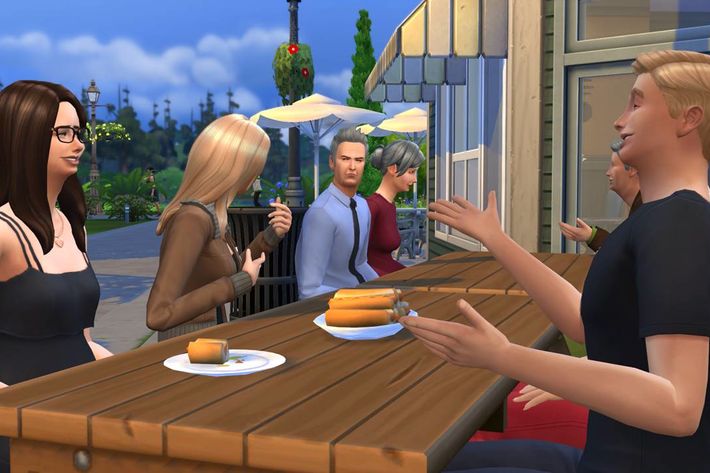 superlatives 17 mins ago
The Most Joyous and Romantic of Journey, According to Neal Schon “We show our dexterity and diversity on all of our albums. We’ve traveled the spectrum musically from A to Z.”
By Devon Ivie
love is dead 1:31 p.m.
Jerry Hall and Rupert Murdoch Are Divorcing Fodder for Succession season four.
spinoff showcase 1:17 p.m.
What Could a Stranger Things Spinoff Be? Some helpful suggestions.
pep talks 1:08 p.m.
David Harbour Called Ryan Reynolds to Console Him When Hellboy Flopped Who knows the heartache better than the Green Lantern?
crime 1:00 p.m.
R. Kelly Sentenced to 30 Years in Prison in Sex-Crimes Case Prosecutors now say he has been taken off suicide watch
vulture 10x10 12:00 p.m.
The Sag Harbor Puzzle 11-Across, Five Letters: Like the game in Sherlock Holmes stories.
vulture lists 12:00 p.m.
15 Classic Summer-Camp Movies, Ranked All the fun of staying up late in your bunk, without the bug bites.
book excerpt 11:00 a.m.
An American Tail Was My Own Test of Endurance Don Bluth went from box office hell to a meeting with Steven Spielberg and “the perfect story.”
life after roe 10:00 a.m.
How TV Writers Crafted Abortion Stories Before the Fall of Roe Writers from five series across broadcast and streaming discuss the challenges and triumphs of normalizing abortion onscreen.
By Jen Chaney
profile 8:00 a.m.
Nathan Fielder Is Out of His Mind (and Inside Yours) The comedian is known for his often hilarious, sometimes mean, always uncomfortable stunts. The Rehearsal is his grandest experiment yet.
By Lila Shapiro
overnights 8:00 a.m.
Only Murders in the Building Recap: Baby Bumpy Betrayal In order to solve a murder mystery, you have to get to know the victim — that’s amateur sleuthing 101.
shorter things 1:08 a.m.
Duffer Brothers Say the Next Season of Stranger Things Will Move Faster But the last episode will be “at least two hours” long and have “like, eight endings.”
crime Yesterday at 11:45 p.m.
Paul Haggis Released in Italy Amid Sexual-Abuse Case Prosecutors will decide whether to continue an investigation.
take your kids to work day Yesterday at 10:49 p.m.
Thor: Love and Thunder Is Apparently a Family Movie In that the children of Chris Hemsworth, Natalie Portman, Christian Bale, and Taika Waititi all appear in it.
overnights Yesterday at 10:00 p.m.
Irma Vep Recap: Three Hours Later Where is the line drawn?
life after roe Yesterday at 8:04 p.m.
Celebrities Respond to the Supreme Court’s Overturning of Roe v. Wade Including Katy Perry, Jessica Chastain, and Ariana DeBose.
in sickness and in health Yesterday at 7:56 p.m.
Travis Barker Is Feeling ‘Much Better’ He said he was hospitalized with “life-threatening pancreatitis” after an endoscopy went wrong.
infinite avatar Yesterday at 6:55 p.m.
All of the Avatar Sequel Announcements: A Timeline The first Avatar sequel has a name, it has a release date, and it has a way with water.
exiting his pandora era? Yesterday at 4:57 p.m.
James Cameron May ‘Pass The Baton’ to Another Director for Avatar 4 & 5 “I’ll want to pass the baton to a director that I trust to take over.”
mike on the run Yesterday at 4:19 p.m.
Killer Mike Returns with Dave Chappelle in ‘Run’ Music Video His first solo song in 10 years.
More Stories