We’re here to discuss the men of Outlander, or the OutMANders, as you might call them. I’ve heard “Outmanders” is actually used to encourage men to watch Outlander, but I’d like to think it’s a reminder for me focus on the real issue at hand while watching the show: the two main men, a.k.a. Jamie Fraser and Frank Randall. Who is the best for our heroine, Claire Beauchamp? Whom should she choose? (Who would you like to see in more sex scenes?) To all you spoilsports, we’re coming from the no-book outlook, seven episodes into the first season — so we are so far unprejudiced by whatever it is to come that you book-readers might already be aware of.

If you’ve read the book, please don’t spoil in the comments. Thank you.

Lindsey: Welcome, Tara. I hear you are Team Jamie, which I feel like is the obvious choice here.

Tara: Yes, I am Team Jamie. There is no other possible team, as far as I’m concerned. The solution is as simple as creating a bandage from a really hot man’s ripped shirt. Jamie all the way!

Lindsey: I don’t know! I think Frank is still who she really wants. I can’t say I wasn’t “moved” by Jamie and Claire’s wedding night (or by his backside), but Claire’s indecisiveness made me extremely uncomfortable. She literally holds up to her hands to look sadly at her two wedding rings! And I don’t think her new, sexy relationship with Jamie in any way diminishes her feelings for Frank. Jamie is the fantasy — the man on the cover of the romance novel. (Ha!) But don’t forget: She lies to Jamie at the end of “Both Sides Now” to run off when she sees Craigh na Dun in the distance.

Tara: Of course she’s conflicted — both men have been good to her in different ways. But in the long run, Jamie is the better match for Claire because their personalities are better suited to each other. In all of those 1940s scenes where Frank is taking Claire to libraries and archives managed by priests, you can just tell she’s bored and itching to get out. She wants to ride a horse through the Scottish countryside! The woman spent five years on battlefields, for Pete’s sake: She needs action.

Lindsey: In our recaps, the wonderful Roxane Gay repeatedly skewers poor Frank for being “boring,” and from the looks of his choice of vacation (History! Fun!), he definitely is. On the other hand: Can I remind you of the scene where they hang out in a dark cave and he goes down on her? It’s the most wonderfully feminist and sexy lead-off for a show that will drag out the next sex scene for seven long episodes. Frank is a good husband, and Claire gives no reason to be unsatisfied other than perhaps being a bit bored. Someone frame this for me: 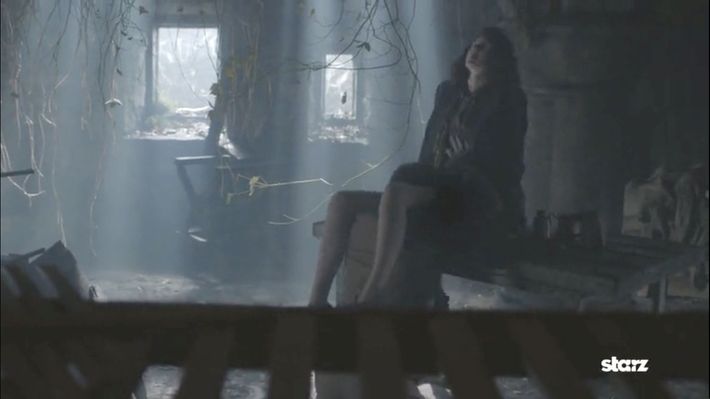 Tara: The act of castle cunnilingus will go down in history as one of the greatest sex acts ever performed on television. And this is honestly one of Jamie’s main faults: He knows nothing about sex. Like, less than Jon Snow, who turned out to be very good at oral sex. (Maybe this is the only thing they teach British guys?) So I will concede this point. But Claire, being the modern feminist she is, can teach Jamie everything she wants about sex. It’s a blank slate. She can now mold him into being whatever kind of lover she wants him to be.

Lindsey: Okay, but I’m worried about how he’s going to react when he finds out that she lied to him and ran off to “see about a Frank.”

Tara: Yeah, that could be a problem. But as we’ve seen before, Jamie trusts Claire’s instincts. (Don’t forget that he already caught her trying to escape once.) He knows that it’s been hard for her to adapt to this new life, and that she has a past that he knows nothing about. From what he’s shown us so far, Jamie tends to be more understanding than judgmental. And he’s a natural-born protector, don’t forget! Those scars are a reminder.

Lindsey: True, maybe at this point, he’ll do whatever she wants. Jamie is certainly a sensitive man.

Tara: Lindsey, how can you deny that wedding night? They had sex three times! Also, and I’m sorry, but we need to talk about that bod. Jamie is steel wrapped in flesh. I only moved my gaze slightly upward to marvel at his glorious, glistening ginger locks. That hair is perfect for pulling.

Lindsey: That GIF! Fine, I’ll give you the redhead advantage. Even my practical nature can’t fight the fact that Outlander’s writers clearly want us (and our raging hormones) pushing for Jamie. But I can only sign on if they agree not to hold off on the good stuff anymore. Forcing us to wait that long for sex is unacceptable. Hear my cry, Outlander!

The Many Sex Faces of Outlander’s Jamie

coming soon 11 mins ago
It’s A-Here, Mario! Chris Pratt, look how you did our boy.
chat room 12 mins ago
John Macmillan Shot Laenor’s House of the Dragon Escape on His First Day on Set “It was a really stormy day, and we were out in the ocean in this massive hundred-year-old boat.”
future trash 4:27 p.m.
John Waters, Pope of Filth, to Direct Adaptation of His Book Liarmouth “Maybe it’s fitting that my novel was shocking enough to jump-start the engine of my film career.”
overnights 4:24 p.m.
She-Hulk: Attorney at Law Recap: Murdock & Walters Charlie Cox’s Daredevil returns to the MCU — and begins flirting immediately.
best of 2022 4:00 p.m.
The Best Video Games of 2022 (So Far) It’s been a really, really, really full year.
coming soon 3:45 p.m.
Glass Onion: A Knives Out Mystery Headed to Theaters After All But only for a week.
highway to hell 3:01 p.m.
The Live-Music Industry Is Broken Supply-chain issues, mental health crises, positive COVID tests. As artists continue to struggle, is any of this even worth it?
vulture guides 3:00 p.m.
A Grey’s Anatomy Catch-Up Guide, No Matter How Far Behind You Are Everything you need to know before jumping back in.
By Maggie Fremont
movie review 2:50 p.m.
Tár Brilliantly Undoes an Ego Monster of an Artist Cate Blanchett is toweringly great as a famous conductor who meets a very public downfall.
jinkies 2:48 p.m.
Mindy Kaling and Constance Wu Are Solving the Mystery of Velma HBO Max’s new animated series follows her (possibly gay) origin story.
buffering 2:26 p.m.
It’s Time to Start Worrying About Peacock Can the streaming service come back from the dead?
trailer mix 2:05 p.m.
Jennifer Lawrence’s Rest and Relaxation Is Over in Causeway Brian Tyree Henry co-stars in the A24 drama co-written by Ottessa Moshfegh.
abel's angels 1:52 p.m.
The Idol Teaser Is Full of Sex, Drugs, and Pop Music Oh, and a cult led by the Weeknd.
overnights 1:25 p.m.
Survivor Recap: Stop Playing Scared While tensions are rising on Vesi and Baka, Coco is just chilling — until Karla goes exploring.
improv 1:15 p.m.
The Second City to Open New Location in First City: New York Its new space is coming to Brooklyn in 2023.
had to get away 1:04 p.m.
The White Lotus Season Two Booked Its Italian Vacation for October 30 The trailer features cheating, drugs, more cheating, and the delightful Meghann Fahy.
rankings 1:00 p.m.
All 193 Taylor Swift Songs, Ranked There are at least ten stone-cold classics in her discography.
By Nate Jones
into the groove 12:43 p.m.
Charlie Puth Is ‘So Inspired’ by ‘LGBTQ+ Culture’ Driving through West Hollywood will do that to a person.
1.5x speed 12:36 p.m.
An Art-World Scandal (and 6 More Podcasts Worth Checking Out) Death of an Artist, Blowback, and more.
role call 12:10 p.m.
William H. Macy Answers Every Question We Have About Boogie Nights On his visit to a porn set, Burt Reynolds’s “clueless” attitude, and making Paul Thomas Anderson laugh — and smell — during that killer shot.
By Derek Lawrence
More Stories