There’s plenty to say about David Fincher’s twisty hit Gone Girl, and we’ve said a whole lot of it already: From reviews to interviews to essays to dick-spotting guides, Vulture has got this movie covered. Still, a film this dense with ideas, images, and performances deserves at least one more deep-dive, this one dedicated to the more minor elements of the movie that nevertheless stood out to us. In fact, some of our following nominations might have even been your favorite part of Gone Girl. Which moment made you giggle, cringe, or gasp more than any other?

• There are a lot of darkly comic moments in the second half of the film, and several of the best ones involve Desi, Neil Patrick Harris’s character. Our audience howled when he took the creme brûlée away from Amy — a condescending bit of smarmy concern that might as well have been the moment Desi signed his own death warrant. And how about his never-ending description of the technological amenities at Amy’s safe house? By the time he’s extolling the virtues of Roku, the scene has become like Fincher’s update of the IKEA-diagrammed apartment from Fight Club.

• Missi Pyle is perfect as the film’s Nancy Grace stand-in, never more so than in the film’s final act, where she comes face to face with the man she’s tormented for ages and tries to wriggle out of any guilt for her part. “I just go where the story goes,” she simpers, and we’d go anywhere Pyle went with this character. (Can you imagine if Fincher made, like, a tie-in web series starring her? If only he were that craven.)

• Just as important as Amy’s diary of marital fan fiction are the various pens she uses to write it. One is a pink stork pen, the perfect inspiration for her pregnancy plot, but another, fluffier pen reminded us of Cher’s pen from Clueless, and even a writing instrument brandished in Legally Blonde by Reese Witherspoon (who happened to produce Gone Girl). As you can see, a girly pen is nothing to joke about, since there are seriously dangerous things being plotted by all three women: 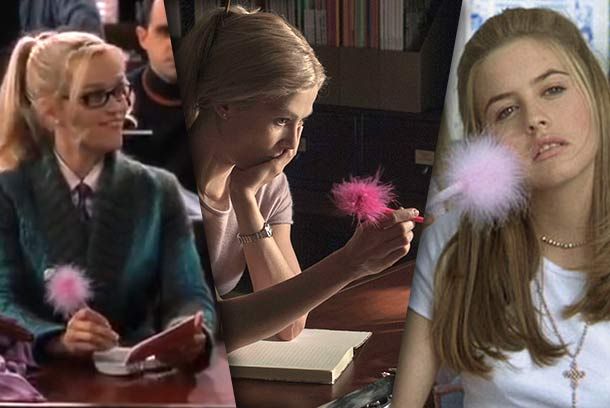 • We had our doubts that model Emily Ratajkowski (of “Blurred Lines” music video fame) could pull off the role of Affleck’s side-piece, Andie, but with a little movie magic, some impressive desperation, and one choice, defeated line reading of “Godspell,” she made it work. And we’re not just saying that because of how real it felt when Affleck buried his face in her (really nice!) boobs. Promise.

• In a movie this sly about its sense of humor, no one is funnier than Tyler Perry, an amiable, counterintuitive casting choice who delivers the line that gets (and deserves!) the movie’s biggest laugh: “You two are the most fucked-up people I have ever met, and I specialize in fucked-up people.” Bravo.

• Even if they didn’t specifically cast Ben Affleck for his butt chin, they might as well have: In the book, Nick is also described as having a cleft chin just like the one Affleck will have jutting out of his Batman mask in 2016. In fact, one of Nick and Amy’s more adorable inside jokes is dedicated to the Chin: He repeatedly covers the cleft with two fingers so as not to seem so villainous (though it’s really Amy who’s in disguise). If you paired that gesture with the three-finger salute from The Hunger Games, you’d get the most incredible box office handshake.

While we’re boring down deep into Gone Girl, though, we did have just a few more miscellaneous quibbles:

• Yes, world. Yes, we know that you also see Neil Patrick Harris’s junk in Gone Girl — and if we’re counting seconds, you see it much longer than you see the D everyone’s been talking about. But if you were paying attention to the madness happening when you see NPHD, was that really a good time to lust? We’re past spoilers here, but do you really want to see a dead man’s D? Is that exciting for you? We’ll take the shower glimpse, thanks.

• Amy is supposed to be a mystery to us when the film begins … and we had to wonder, is that why nearly all of Rosamund Pike’s dialogue was redubbed in the first hour? Because girl was ADR’d to death, and it’s rare that you’d find something so conspicuously out of step in a David Fincher movie, where every detail is exactingly crafted.

What did you think? Get geeky with us!

+Comments Leave a Comment
What Were the Best Parts of Gone Girl?

total request live 9 mins ago
How Long Will This Radio Station Keep Playing Rage Against the Machine? Something something, I won’t do what you tell me.
overnights 27 mins ago
The Real Housewives of Beverly Hills Recap: Cake It or Leave It We get Diana’s Joker origin story, I guess.
my single is dropping 9:03 p.m.
Close Out Pride With Peach PRC’s Cover of ‘Teenage Dirtbag’ “Bye, gay!”
my diamonds! 7:56 p.m.
Court to Erika Jayne: Return the Jewels Erika Jayne is still on the hook for diamonds bought with allegedly embezzled funds.
coming soon 7:07 p.m.
Diablo Cody Reviving Horror Comedy with Lisa Frankenstein Cole Sprouse and Kathryn Newton will star in the film.
coming soon 6:40 p.m.
Michaela Coel, John Turturro, Paul Dano Join Mr. & Mrs. Smith They join Donald Glover and Maya Erskine as the titular coupled killers.
this month in comedy podcasts 4:48 p.m.
This Month in Comedy Podcasts: Cranking That Abolition With Rebecca Bulnes Rounding up our favorite comedy-podcast episodes of the month.
it's a potion 4:29 p.m.
Calvin Harris Leaks the Guest List for His Summer Rager, Funk Wav Bounces Vol. 2 Everyone who’s anyone — even a few who aren’t! — is going to be there.
unretirement plan 4:11 p.m.
Cameron Diaz Unretires From Acting for an Annie (2014) Reunion “Together again!” — an apt lyric from everyone’s favorite version of Annie.
crime 3:21 p.m.
R. Kelly Sentenced to 30 Years in Sex-Crimes Case “I hope you go to jail for the rest of your life,” one victim said; Kelly did not make eye contact.
trailer mix 2:43 p.m.
Julia Roberts and George Clooney Play Lovers to Exes to … Lovers? Reuniting in the trailer for Ticket to Paradise, co-starring Kaitlyn Dever.
in sickness and in health 2:40 p.m.
Travis Barker Has Been Hospitalized He’s reportedly being treated for pancreatitis after a recent colonoscopy.
calling all readers! 1:59 p.m.
Las Culturistas Teach The View How to Pronounce ‘Las Culturistas’ Now your mom knows about Fire Island, for better or worse.
the claw 1:16 p.m.
Diving Headfirst Into Squishmallows at VidCon To Squish or not to Squish.
vulture 10x10 12:52 p.m.
The Podcast Puzzle 1-Across, Nine Letters: Genre parodied by Only Murders in the Building.
overnights 12:45 p.m.
Ms. Marvel Recap: Karachi Blues A detour to Pakistan is filled with quiet moments and meaningful exposition.
vulture lists 12:00 p.m.
10 Bombastic Action Movies to Watch After RRR For anyone craving more explosions from Tollywood, Bollywood, and far beyond.
trailer mix 12:00 p.m.
High School Musical: The Musical: The Series Trailer: What Time Is It? Summertime!
chat room 10:51 a.m.
The Bear’s Lionel Boyce Didn’t Bake Those Doughnuts, But He Did Glaze Them “I tried to make doughnuts, and boy, did I burn those. It’s not easy.”
arrests 10:41 a.m.
Everything We Know About YSL’s RICO Case The 88-page grand-jury indictment characterizes YSL, “Young Slime Life,” as a “criminal street gang” and alleges 182 instances of criminal activity.
More Stories