This post originally ran in October 2014. We are rerunning it because, as things end, it’s good to remember where they started.

I remember the moment in April 2005 when I heard that Jennifer Garner and Ben Affleck were getting married. I was in college at the time and I didn’t really follow gossip news, so I didn’t even know they had started dating. But still, there, burned in my brain, is the memory of me seeing the news and thinking, Of course. See, I had seen the episode of Dinner for Five (Jon Favreau’s short-lived IFC show where he had actors and directors eat dinner together) that they appeared on together, along with their Daredevil cast members, and I had observed Jennifer Garner fall madly in love with Ben Affleck.

The episode aired in January 2003, which means Ben was still dating Jennifer Lopez (Lopez and Affleck had gotten engaged only a couple months prior). Maybe Ben didn’t allow himself to love Garner back, but that didn’t stop her. (As a commenter points out, Garner was still married to Scott Foley. They announced their separation two months after this aired.) I will present you three moments, each better than the next. The whole episode is online, but a lot of it is Kevin Smith talking about stuff that has nothing to do with true love.

1. The first moment starts with Ben Affleck talking about how he has a big forehead, which causes Garner to slap her head to show that she also has a giant forehead. This elicits a big smile out of her that Affleck quickly discourages. The conversation continues and Kevin Smith starts making fun of Affleck, which causes Garner (at the 16:10 mark) to want to defend his honor. (Warning: Affleck comes off like kind of a douche. He comes off like kind of a douche throughout the entire episode.)

2. Here Garner talks about how she was cast for the role of Elektra, and thanks Affleck for not making her audition. Right at about 20:09, she gives him such a genuine look of gratitude and affection, it still makes me a bit uncomfortable to see it on television.

3. Still, that has nothing on this last look. Are you ready? Affleck is telling the story of going to the Oscars. He tells a joke about how out of place he and Matt Damon felt at the Writers Guild Awards, and BOOM. At the 21:02 mark! This is the exact moment she fell in love with him. This is the image I thought of two years later, when they finally got engaged.

Yep, there it is. 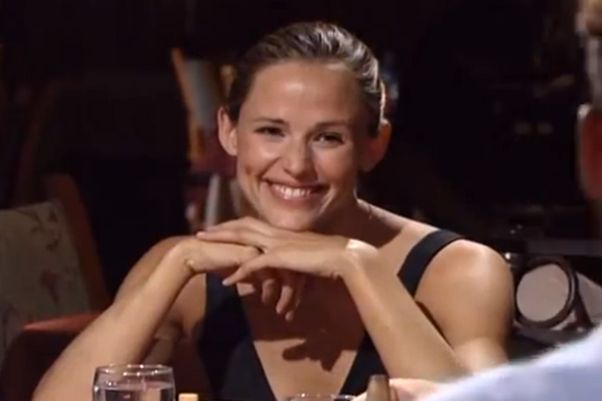 The rest is history and hard work.

first person 8:00 a.m.
The Voice of New York Is Drill  It’s the most captivating sound the city has heard in decades — and also the most misunderstood. Here, 19 NY drill artists set the record straight.
By Camille Squires
guides 8:00 a.m.
The Drill Songs to Know A mini genre primer.
the law 8:00 a.m.
What Happens When Drill and the Justice System Clash in the Courtroom? Lawyers and lawmakers share their experiences.
profile 8:00 a.m.
The Tragedy of Jayquan McKenley He wanted to be a drill star. He became a symbol in a culture war instead.
By Simon van Zuylen-Wood
bad boys 12:33 a.m.
Zoë Kravitz Wanted ‘Boy Next Door’ Channing Tatum to Play a Dark Character “It’s always really intriguing to have someone bring you something that literally no one else has ever thought of you for.”
overnights Yesterday at 10:31 p.m.
What We Do in the Shadows Recap: Shout at the (Jersey) Devil This is about as heartwarming as What We Do in the Shadows gets. (Insert Nadja making a barf gesture here.)
tweet tweet Yesterday at 9:08 p.m.
Rachel Zegler Lies in Snow in Hunger Games Prequel First Look Well, technically Coriolanus Snow for The Ballad of Songbirds and Snakes.
family reunion Yesterday at 7:04 p.m.
The Addams Family Sticks to Their Roots in Netflix’s Wednesday The first look images of Tim Burton’s Addams Family spinoff is here.
alternate endings Yesterday at 6:35 p.m.
Better Call Saul Could Have Ended Very Differently Jesse in prison, Gene in color, and the other possibilities considered, sincerely and in jest, for the end of this decade-and-a-half-spanning saga.
mac-ken-zie da-vis Yesterday at 6:24 p.m.
MacKenzie Davis Shows a Massive Respect to Stath Lets Flats Watch her go. Watch her go.
clear eyes full hearts Yesterday at 5:59 p.m.
W Magazine’s Uncanny Valley TV Cosplay, Ranked From last-minute Halloween costume to, well, store-bought Halloween costume.
music Yesterday at 5:49 p.m.
What Is the Sound of Drill? Brrrrrrrrrrap. Bang! Bam! Pow!
batter up! Yesterday at 5:27 p.m.
All of A League of Their Own’s Nods to the 1992 Peaches Of course the Prime Video series knows “there’s no crying in baseball,” but that’s just the beginning of its many winks to the movie.
rip Yesterday at 5:20 p.m.
Wolfgang Petersen, Das Boot and The NeverEnding Story Director, Dead at 81 The German director defined action thrillers for a generation with films such as In the Line of Fire.
nicki voice: it's the remix Yesterday at 4:42 p.m.
Rogue One to Be Rereleased With a Sneak Peek at Prequel Series Andor Ahead of the Disney+ series’ September 21 premiere.
a long talk Yesterday at 4:27 p.m.
Kim Wexler’s Curtain Call Better Call Saul’s Rhea Seehorn looks back on six seasons spent getting inside ‘an extremely inscrutable character.’
By Jen Chaney
the o group Yesterday at 3:35 p.m.
Wait, How Many Homes Has Selling Sunset Star Chrishell Stause Sold? “As of June, I think I’ve done seven deals so far in real estate …”
vulture lists Yesterday at 3:00 p.m.
A Ranked Guide to John Wick–Inspired Movies Evaluating the latest generation of stunt-heavy, fist-fighting action movies.
movie nights Yesterday at 3:00 p.m.
Noah Baumbach’s White Noise Will Open This Year’s New York Film Festival Luca Guadagnino’s Bones and All and Maria Schrader’s She Said join the festival’s Spotlight selection.
trailer mix Yesterday at 2:31 p.m.
Cobra Kai Season 5 Trailer: The Valley Is Still at War Netflix’s Karate Kid spinoff premieres with honor on September 9.
More Stories