Jake Gyllenhaal dropped 25 pounds to play a doe-eyed sociopath in Nightcrawler, and it looks like he also threw himself headlong into playing junior middleweight Champion Billy “The Great” Hope for Southpaw. Deadline has the first image from the film, showing a jacked Gyllenhaal (who reportedly put on 15 pounds of muscle for the role). “I had him training twice a day in the boxing ring, he did two-a-days seven days a week,” said director Antoine Fuqua. “I think he broke up with his girlfriend because he was just in the gym every day. He was training like a fighter. I had him sparring, really getting hit. I put him in situations where I wanted to see what he was made of. No one but fighters understand the sacrifice it takes to be a fighter.” Masculinity! 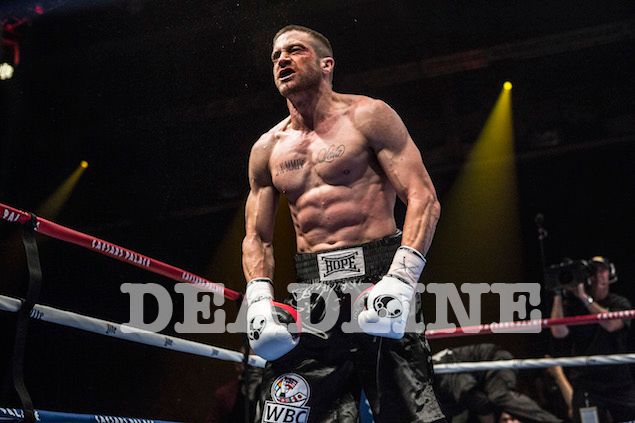 last night on late night 26 mins ago
Lady Gaga ‘Never Met’ Jared Leto While Filming House of Gucci “I was always with Paolo; he was always with Patrizia.”
role call 12:00 p.m.
Julie Delpy Answers Every Question We Have About 2 Days in Paris On tricking studio executives into making movies, dodging the word “crazy” throughout her career, and why she thinks she might be Larry David.
By Rachel Handler
vulture 10x10 12:00 p.m.
The EGOT Puzzle 12-Across: The Peter ___ (because “Spidey sense” is so 2002).
last night on late night 11:43 a.m.
Paris Hilton and Jimmy Fallon Go Ape for Print Outs of NFTs A physical copy of a jpeg that Hilton owns (a link to).
look out! 11:00 a.m.
Sam Raimi’s Spider-Man Movies to Swing Onto Crackle For Free He’ll arrive just in time for February.
superlatives 10:55 a.m.
Carl Barât on the Most Anthemic and Agonizing Music of His Career “Well, from my view, I thought everyone would be dead.”
By Devon Ivie
book excerpt 8:00 a.m.
Bad Reputation Accusations of copying dogged James Dean’s brief career, in part because they were true.
By Isaac Butler
choices 2:13 a.m.
Neil Young Says Spotify Can Have His Music or Joe Rogan’s Vaccine Misinformation “Not both.”
sundance 2022 12:43 a.m.
Evan Rachel Wood Says She Was ‘Raped On-Camera’ by Marilyn Manson “I was coerced into a commercial sex act under false pretenses.”
remakes 12:02 a.m.
Disney’s Live-Action Snow White ‘Makes No Sense’ to Peter Dinklage “You’re progressive in one way, but you’re still making that fucking backwards story of seven dwarfs living in a cave together.”
overnights Yesterday at 10:30 p.m.
Summer House Recap: Red, White, and Lewd It’s the Fourth of July, and everyone is doing their patriotic duty by trying to get laid or having relationship drama.
overnights Yesterday at 10:25 p.m.
The Gilded Age Series-Premiere Recap: Keeping Up With the Astors The long-awaited The Gilded Age has arrived, and we’re jumping into a charming era of corruption, greed, corporate monopolies, and industrialization.
the gilded age Yesterday at 10:00 p.m.
Did You Know This Is a Gummer? One crucial thing to consider about The Gilded Age.
the law Yesterday at 9:03 p.m.
Cardi B Wins $1.25 Million in Defamation Lawsuit Against Tasha K The rapper had testified that the blogger’s claims made her feel suicidal.
overnights Yesterday at 9:00 p.m.
Below Deck Recap: Testy and Tacky It’s the last charter of the season, and the crew is over it!
this! is! huge! Yesterday at 7:30 p.m.
Amy Schneider Achieves Jeopardy!’s Second-Longest Winning Streak 39 games later!
red table (taylor's version) Yesterday at 6:47 p.m.
Taylor Swift’s Songwriting Skills Are a Blur to Damon Albarn “Your hot take is completely false and SO damaging,” she responded on Twitter.
cut to the feeling Yesterday at 5:54 p.m.
Now We Know Who Would Win If James Bond Fought a Ring Light Daniel Craig met his match during a Zoom interview.
chat room Yesterday at 5:47 p.m.
Euphoria’s Eric Dane Is Building ‘Cal 2.0’ “Last year, Cal was very contained, very protected, very cautious. This season, he gets cut loose a bit.”
disrespect the classics Yesterday at 5:33 p.m.
Eric Clapton Thinks We’ve Been Hypnotized Into Getting Vaxxed And it’s his “calling” to talk about it.
More Stories