Taylor Swift just broke up with Spotify, and the streaming service is not taking it well. Like many of Swift’s breakups, this one resulted from an unattractive spat of passive aggression: Spotify put public pressure on Taylor to release 1989 on streaming, essentially telling her to abandon a strategy that makes her money in favor of a strategy that would make Spotify money. To express her disapproval of this idea, Swift decided to remove all of her albums from the streaming service. (You can still listen to “Safe and Sound” from the Hunger Games soundtrack as many times as your heart desires.) Spotify is not hiding its heartbreak with this very desperate statement:

We love Taylor Swift, and our more than 40 million users love her even more – nearly 16 million of them have played her songs in the last 30 days, and she’s on over 19 million playlists.

We hope she’ll change her mind and join us in building a new music economy that works for everyone. We believe fans should be able to listen to music wherever and whenever they want, and that artists have an absolute right to be paid for their work and protected from piracy. That’s why we pay nearly 70% of our revenue back to the music community.

PS – Taylor, we were both young when we first saw you, but now there’s more than 40 million of us who want you to stay, stay, stay. It’s a love story, baby, just say, Yes.

The begging doesn’t stop there. Spotify has released two playlists for the occasion: The first, “Come Back, Taylor!,” is full of pleading love songs; the second, “What to Play While Taylor’s Away,” is an unconvincing attempt to show Spotify’s friends and family that it’s doing just fine without her. If only the streaming service had more indie records — we hear they’re a great way to hide away and find your peace of mind after a breakup.

UPDATE: Rolling Stone notes that titles of all the songs on the “Come Back, Taylor!” playlist spells out a hidden message to Swift: “Hey Taylor, we wanted to play your amazing love songs and they’re not here right now. We want you back with us, and so do do do your fans.” This is just sad. 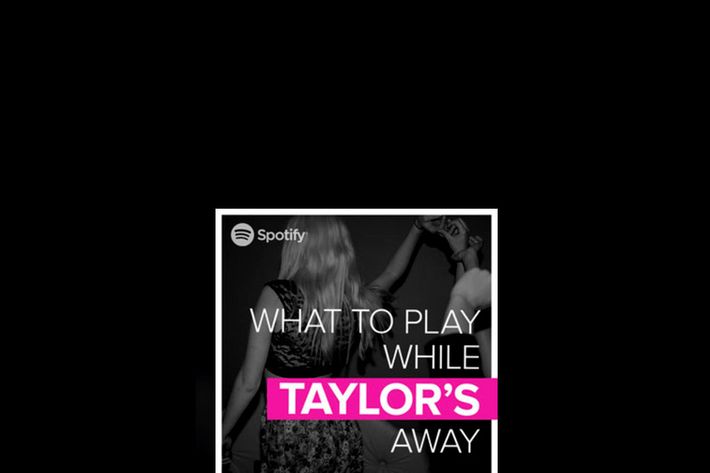