Vulture is speaking to the screenwriters behind 2014’s most acclaimed movies about the scenes they found most difficult to crack. Which pivotal sequences underwent the biggest transformations on their way from script to screen? Today, we spoke to writer-director J.C. Chandor about the sequence in A Most Violent Year in which oil distributor Abel (Oscar Isaac) finally decides to go after the mysterious men who’ve been hijacking his oil trucks for months. The scene is then excerpted below.

What I wanted to do was have that big final chase sequence be visceral and exciting, all the things that are why I love action movies. I wanted to give you those same thrills, but have it be representative of what the movie is about, which is realistic and human-scaled. It’s an emotional chase sequence, basically. There’s an ethical decision at play.

As a writer-director, my scripts are normally very locked by the time I’m shooting the movie, but I’m then able to be very comfortable on set and try things because I know the movie I want to make. That whole chase sequence was something where I knew what I wanted and I knew what I had written, and I realized I could continue to have it grow as we shot it. The real change for the entire sequence was the shoes. Oscar came out for one of the early shooting days, and the stunt person was asking me to put him in black sneakers that looked like his dress shoes. Oscar’s a pretty good athlete, and I realized that if we put him in sneakers running around, it wouldn’t look like this guy being lured into revenge — he’d be flying through it, looking like Tom Cruise. Throughout the film, he’s wearing these leather-bottom loafers, and the fact that he’s running around corners and hobbling over rocks like a real person in his dress shoes … that’s when it all clicked for me, that’s when I understood what I wanted that scene to be about. Sadly, it led to Oscar falling on his ass. Which is in the film!

The other big change was finding the tunnel we shot in. We were on a scout in a rough part of New York City, and drove over this overpass with an amazing train trellis, where there were these four tunnels and only one of them was operational. I literally turned around and said, “What is that?” It was the old Atlantic Yards terminal, and I asked, “Would they ever let us drive through there?” And with his typically adventurous location scout mentality, my young location scout was like, “Well, let me find out!” And the next day, we were back at that same place. A member of the railroad group was driving in front of us in an SUV, and he didn’t tell us what he was going to do. We’re following him in the scout van, we cross the tracks, and then he freakin’ drives into the tunnel — just like Abel! All of us in the scout van are kind of laughing that we’re about to follow him into this thing, and then we do, and we just go silent. We’re all filmmakers and we knew we were in a perfectly controlled environment … but we were scared. It was a very weird feeling driving into total darkness like that — it’s literally like you’re being drawn into hell. Sometimes, filmmaking days are miserable and they don’t end up anything like you wanted them to. Others don’t end up anything like you planned, and they’re the greatest days you can imagine — and that scout day was one of them. That day in the tunnel became the foundation of our entire sequence.

In gangster movies, since the ‘30s, there are usually these two big set pieces, but how do you incorporate a big set piece into a movie that’s essentially a character study? For some people whom the movie’s not working for, they feel like this chase scenes comes out of nowhere, but the way I tried to make the movie is that all the violence in the movie is ingrained in these characters’ lives, and supposed to be human-scaled and not movie-scaled. There are all these people who’ve been saying, “It’s called A Most Violent Year and it’s not even violent,” but I would ask a real person living on planet Earth, “If they went through the things that happen to these two characters in the movie, wouldn’t that be the most violent year of their life?” Unless you’re a freaking sociopath, the answer is probably yes! Your trucks are stolen, and sometimes the drivers are beaten brutally. Some horrible guy leave a gun that your daughter finds. Your wife has gone out and gotten a gun because she’s so desperate, and used it in front of you — and then there’s a whole lot that happens near the end that I won’t spoil. That’s a pretty bad year! 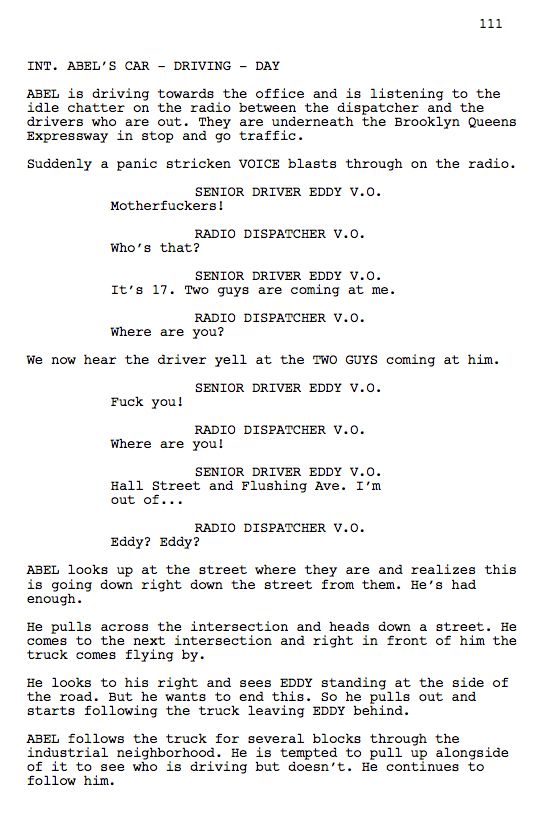 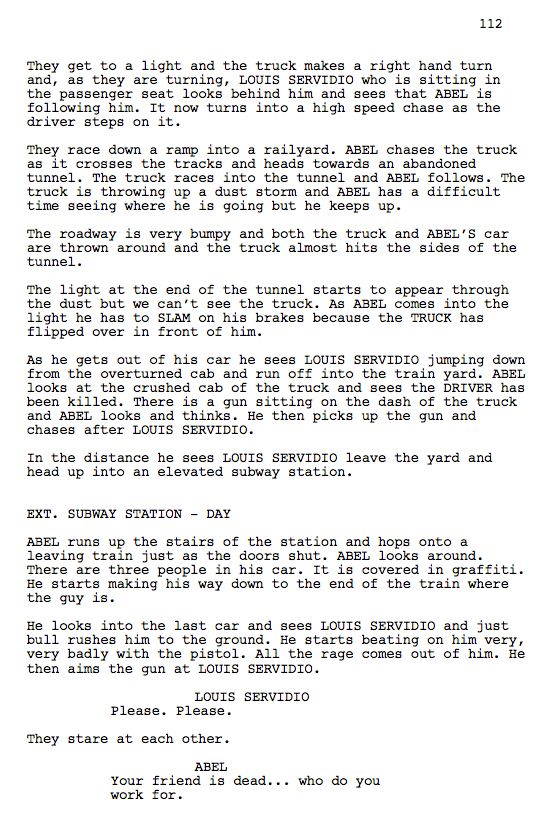 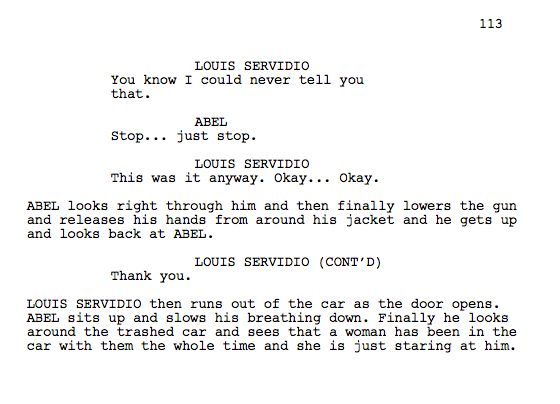 ask an expert 5:42 p.m.
Alec Baldwin is Officially Charged in Rust Shooting. Now What? “There’s just a huge disparity in the charges.”
oscars bad boy 5:28 p.m.
Will Smith Is Back for His Movie-Star Bag With Bad Boys 4 Smith and Martin Lawrence ride together, make movies that make money together.
for your consideration 5:15 p.m.
A Timeline of Andrea Riseborough’s Controversial Oscar Nomination Within seven days, Andrea Riseborough’s performance in To Leslie went from obscurity to the toast of Twitter. And all it took was a few famous fans.
By Nate Jones
crime 5:08 p.m.
Alec Baldwin Charged With ‘Directly’ Causing Rust Shooting Prosecutors allege “no less than a dozen” negligent acts by Baldwin even before Halyna Hutchins was shot.
vulture sports 4:48 p.m.
The Oscars Bestow a Bounty of Points Upon the Movies Fantasy League Awards season is hitting its stride, and so are the top MFL teams.
bravo encore 4:38 p.m.
What’s Going on With RHONY: Legacy? Is she “dead”?
gods and monsters 4:07 p.m.
Chapter 1: Everything We Know About the Future of the DC Universe Congrats to Viola Davis, who remains the most unscathed DC Universe actor.
2 king 2 hill 3:48 p.m.
Travel Back to Arlen in a New King of the Hill Reboot Hulu announced a revival of the beloved series on January 31.
timelines 3:10 p.m.
The Complete History of Ezra Miller’s Controversial Career From kidnapping allegations to a plea deal for unlawful trespassing to the DCEU’s master plan.
chat room 2:48 p.m.
Nelson Franklin Is Thankful He’s Not the ‘Uglier George Santos” Comedy’s go-to That Guy discusses appearing in — or auditioning for — most of your favorite sitcoms.
celebrity memoirs 2:14 p.m.
Pamela Anderson Knows Even a Memoir Can’t Tell All Though there are not many new revelations, ten stories stuck out.
essential episodes 2:02 p.m.
Columbo Is the Ultimate ‘Rich People Are Weird’ Show Peter Falk’s rumpled detective takes down lots of wealthy loonies.
sad gay representation 1:18 p.m.
The Last of Us Fans Are Screaming, Crying, Streaming Linda Ronstadt “Long Long Time” is running (back) up that chart.
sundance 2023 1:04 p.m.
Sundance’s Year of Existential Crisis Yielded Back-to-Back Megadeals Insiders call this year’s Sundance a return to form, with several all-night bidding wars and multiple eight-figure deals.
By Chris Lee
funny videos of the month 1:00 p.m.
The Best Comedy Shorts of January 2023 Rounding up our favorite funny videos of the month.
By Luke Kelly-Clyne and Graham Techler
backstories 12:35 p.m.
‘There Couldn’t Be Any Normal Scenes in This Movie’ Damien Chazelle and his collaborators explain Babylon in three key scenes.
By Bilge Ebiri
hive mentality 12:11 p.m.
Dominique Fishback Isn’t Doing Much to Rehabilitate Stan Culture’s Image As an obsessed fan in Donald Glover’s new series, Swarm.
hbo axe’d 12:04 p.m.
HBO Max’s Abandoned TV Shows Adopted by Tubi and Roku More than 200 titles from Warner Bros. Discovery are moving.
album review 12:00 p.m.
Lil Yachty’s Great Gig in the Sky The rapper’s surprising new psych-rock album delights in sensory overload.
vulture 10x10 12:00 p.m.
The Scooby Puzzle 7-Down, Ten Letters: Batman’s Home
More Stories