Over the next few weeks, Vulture will speak to the screenwriters behind 2014’s most acclaimed movies about the scenes they found most difficult to crack. Which pivotal sequences underwent the biggest transformations on their way from script to screen? Today we spoke to Craig Johnson and Mark Heyman, who co-wrote Johnson’s film The Skeleton Twins, about a scene between twins Milo (Bill Hader) and Maggie (Kristen Wiig) that occurs after Milo nudges his sister’s husband toward a devastating secret Maggie had been keeping. The scene is then excerpted below.

Craig Johnson: Toward the end of the movie, there’s a moment where everything comes to a head for our main characters and they have a big blowout fight in the backyard, where a number of things go down. Everything that they’ve kept bottled up comes spilling out, and for me, the trick to writing that kind of fight is finding that balance between dialogue that sounds natural and dramatic without tipping over into melodrama.

Mark Heyman: They’re having a pissing contest over which one of them is more fucked-up, and there’s also a need in that scene to have Maggie say something so incredibly cruel that it fully breaks them apart and prompts Milo to take off in the next scene. That was challenging: What’s that thing that would cut so deep that it would just end the conversation? What might you say in the heat of an argument that you’d immediately regret?

Johnson: For a long time, we didn’t have it, and the scene was lacking that splinter moment that would blast them apart from each other. It can be hard to think of really mean things when these are two characters you’ve grown to love! When Bill and Kristen were actually doing the scene, they really struggled with it because they hated saying such awful things to each other, too. What we landed on was Milo telling Maggie, “Maybe I should try fucking all my problems away,” because her character has a history of sleeping around. And then Maggie tells Milo, who attempted suicide in the first scene, “Maybe next time you should cut deeper.” I do remember that when that Maggie line tumbled out of our mouths, we were sort of stunned into silence.

Heyman: What’s interesting about the process and about writing in general is that you can sometimes identify a goal — which, in this case, was “We need Maggie to say something incredibly harsh and unforgivable” — and ultimately the solution appears not by coming up with the line itself, but working on the back-and-forth dialogue. Without his line, we wouldn’t have gotten to her perfect retort. That’s the thing that can be frustrating about writing sometimes: You’re banging your head against the wall, thinking, I just need this perfect line! but it won’t occur to you until you’ve set up the precursor lines properly. It has to happen organically. 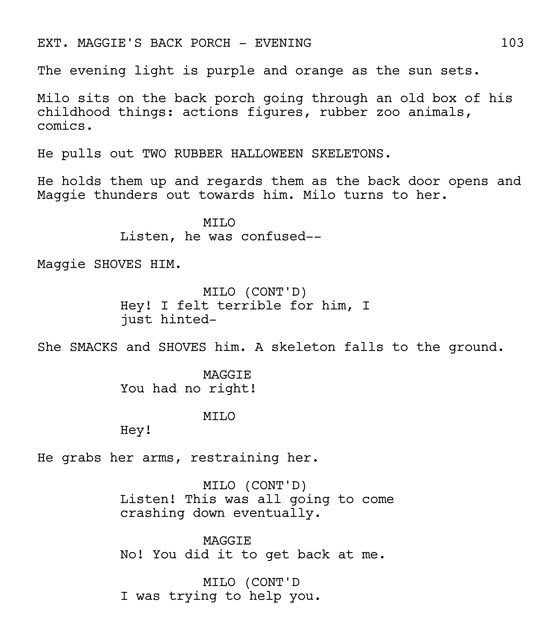 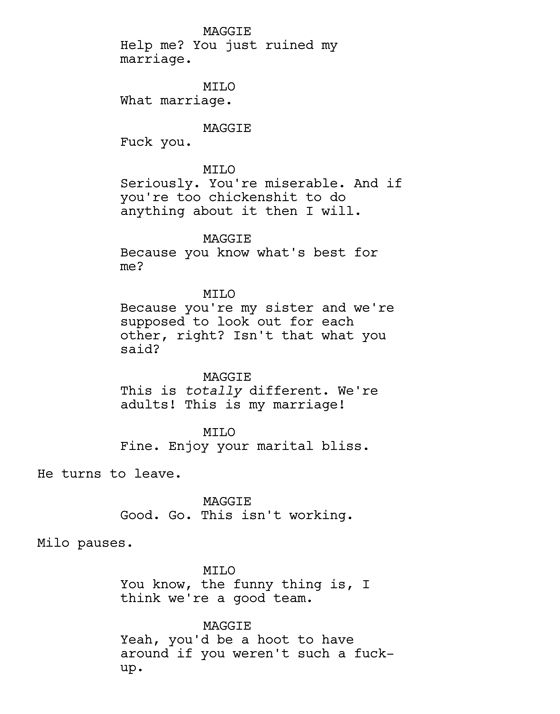 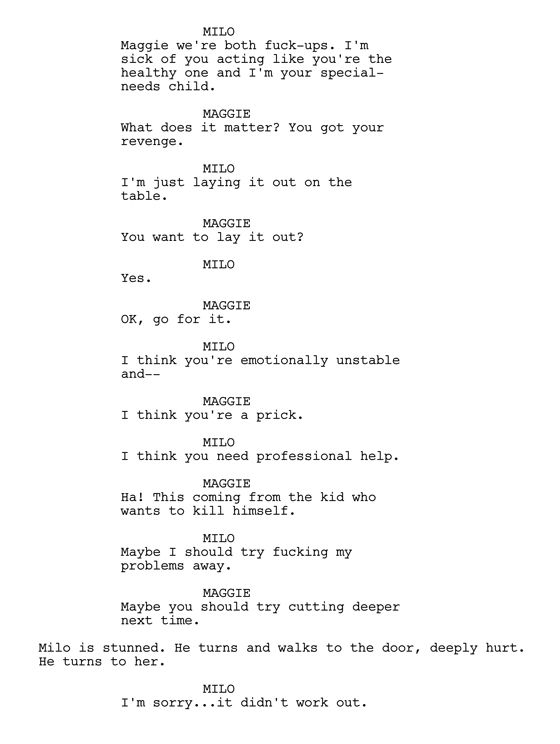