Hollywood has never made a great movie about North Korea, and now it’s uncertain whether it ever will. It was close, though. Unlike the mediocre Rogen/Franco comedy at the center of this hurricane, Pyongyang, the planned film adaptation of cartoonist Guy Delisle’s nonfiction comic book Pyongyang: A Journey in North Korea, could have been a work of art. But now it’s lost to us forever.

Director Gore Verbinski was helming the project, and Steve Conrad had written the screenplay. New Regency was producing it. It was to star Steve Carell as an unusual protagonist based on Delisle: an animator visiting one of North Korea’s little-discussed animation studios. What little we know about the movie suggests Verbinski and Conrad had sexed up the plot from Delisle’s original nonfiction narrative: The Wrap reported it was to be “a paranoid thriller about a Westerner’s experiences working in North Korea for a year”; the book actually has very little narrative and merely recounts Delisle’s work and wanderings in the titular capital of North Korea for a couple of months. So who knows? Maybe Verbinski and Conrad would have watered down the beauty of Delisle’s original work and turned it into a generic foreigner-in-trouble flick.

But the source material is so rich, masterful, and unique that one can’t help thinking we lost our shot at something beautiful. Pyongyang is one of the most beloved graphic novels of the past 20 years (note: the term “graphic novel” here doesn’t refer to a novel, per se, given that the story was a nonfiction memoir; however, there’s no good replacement term), and deservedly so. 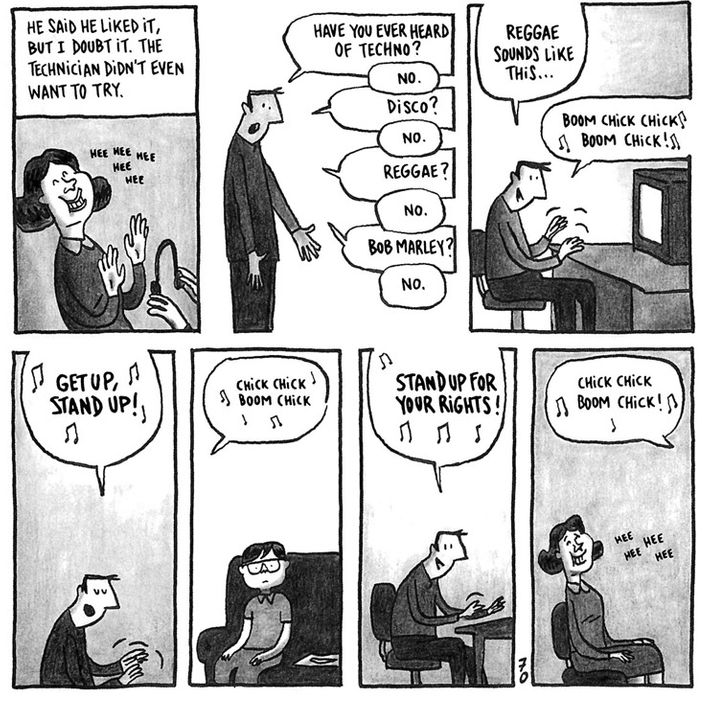 Where other tales of North Korea (admirably) shout about the country’s horrors and international belligerence, Pyongyang is quiet and observant. Where other writers and documentarians have met resistance from regime officials, Delisle simply came for a job and was therefore granted uncommon access and treatment. Where other storytellers have portrayed themselves as muckraking heroes (or not portrayed themselves at all), Delisle depicted himself acting the way most of us would: playing by the rules, regretting dumb things he blurted out, drinking too much, feeling lonely, and often being an irritating jerk to those around him.

The book is light on plot and heavy on observation. In 2001, Delisle — a Canadian Québécois artist and animator — gets a two-month visa to stay in Pyongyang. He spends his workdays at SEK Studio, an animation house that does outsourced grunt work for some Western production companies (the U.S. isn’t supposed to use North Korean labor for its animation, but there have been allegations that studios as big as Disney have gotten covert work done there). He struggles to communicate with the animators, who are incompetent but friendly. Their interactions are fascinatingly non-condescending: Delisle doesn’t act like an enlightened Western savior, but instead just a frustrated colleague.

Handlers and translators follow him around, as is common for foreign visitors, but he manages to shake them off for a brief trip to a harmless-but-off-limits train station. He’s only mildly chastised, and for the most part, the men assigned to follow him contendedly take him to various major sights: the massive statue of Kim Il-sung, a museum declaring North Korea’s great relations with all peoples of the world, the massive pyramidal hotel that (if it’s ever finished) will be the largest hotel in Asia, and so on. He hangs with the small group of other foreigners who are there for various tasks: an Austrian aid worker, a Middle Eastern diplomat, Chinese tourists, and the like. It often feels like a dystopian Lost in Translation, made even more fascinating than that movie because Delisle’s narrative is so calm and personal. 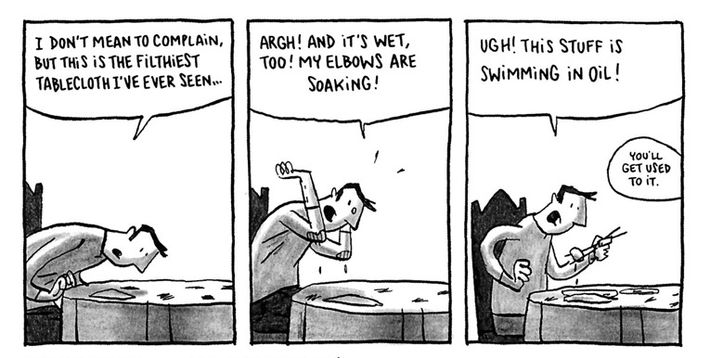 “I have bits of journalism in it because I have to convey information in the book, like how they distribute the food and this and this, but it’s a really small part of the book,” Delisle told the Comics Journal in 2011. (He declined my request for an interview.) “The rest is more about everyday feelings and the impressions I had about the people. I’m much more of a traveler than a journalist and much more of a daydreamer. The best description I can make of my book is it’s a big postcard I would send to my family. In that postcard I put everything I find funny, strange, interesting and I want to explain a few things, but for me it’s very far from journalism.”

Instead, we get one illuminating vignette after another. There’s the time a smiling SEK technician plays some North Korean pop songs, which Delisle describes as “a cross between a national anthem and the theme song of a children’s show … like a Barney remix of ‘God Save the Queen’ or ‘Oh Canada.’” Or the time he stays out too late and is forced to walk home in near-total darkness (Pyongyang shuts off its streetlights after dark, making the metropolis eerily postapocalyptic), but finds his way when he comes upon the only lit object he can find: a massive painting of Kim Il-sung. (How great would that have looked on film?) Or the time Delisle and a fellow foreign animator make up a song about their translator to the tune of the Captain Planet theme. The list goes on. Everything is elegantly told and compellingly specific. 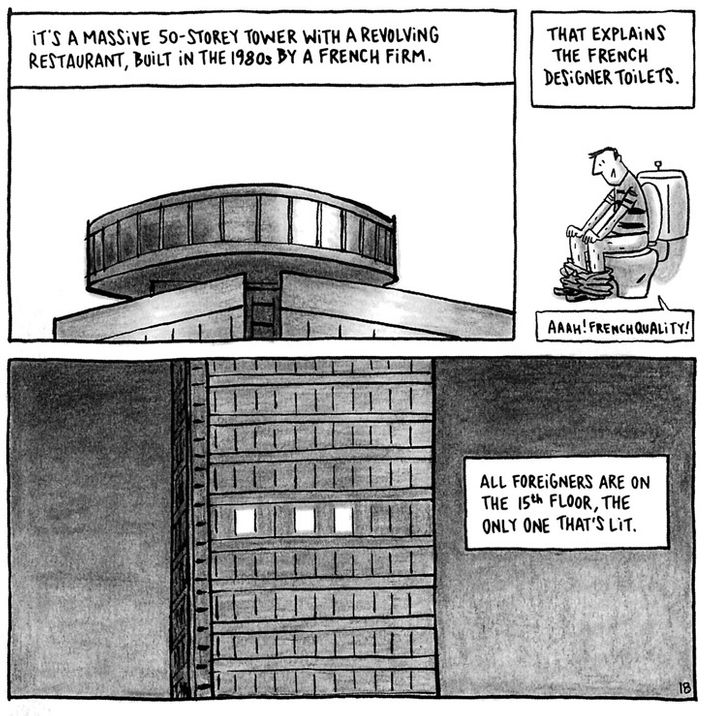 There are occasional grand observations about North Korea, but they’re blessedly few and far between. Instead of being self-righteous, Delisle writes himself as a bit of a dick. While touring a museum devoted to tortures inflicted by Japanese and Americans, he idly fantasizes about screwing the tour guide (“I think up a few tortures of my own that I wouldn’t mind inflicting on her”). He sees a poorly drawn animation of a cartoon bear waving good-bye and cackles about how terrible it is, right in front of the ashamed and confused director (he tells the man that the bear looks like he’s “giving a salute while getting an electric shock! Ha ha ha ha! Yes, ha ha ha! That’s exactly it, an electric shock! Dzzt! Dzzt!”). How wonderful it could have been to see Steve Carell, that master of improper behavior, playing such an awkwardly human protagonist.

But we’ll never see Carell step into Delisle’s shoes. In a statement, Verbinski said Fox — the movie’s distributor — had refused to distribute it under any circumstances. New Regency was “forced to shut the film down.”

As Verbinski told Deadline: “I find it ironic that fear is eliminating the possibility to tell stories that depict our ability to overcome fear.” Delisle’s original book wasn’t about overcoming fear, so maybe we can take solace in thinking we’ve avoided a movie that ruined Delisle’s original vision. But that’s cold comfort. A story like Delisle’s — no matter how warped it might have become — needs to be told, if we’re to understand the bizarre and awful country that has become abruptly central to film history. Instead, all we’ll be left with is pirated copies of The Interview. 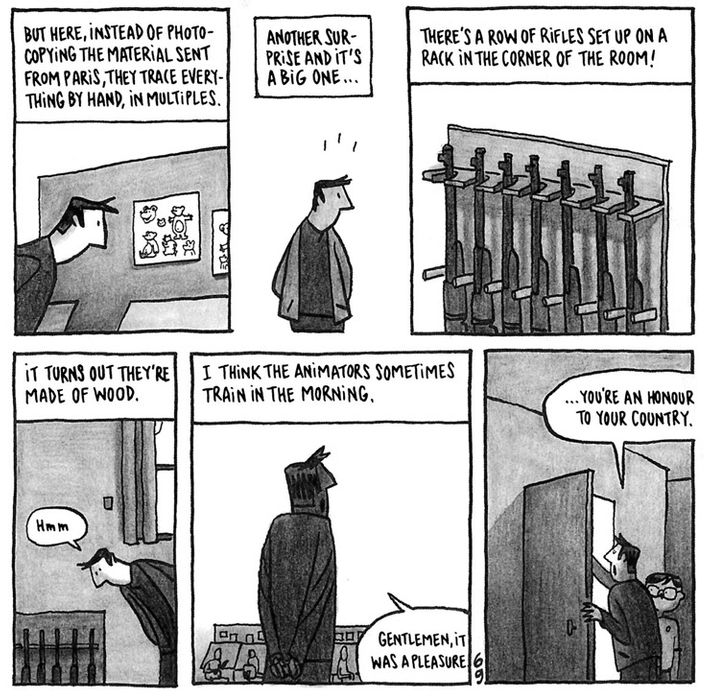 switching up 26 mins ago
Hey, Jennifer Aniston and Julia Roberts Are Gonna Swap Bodies In a comedy movie that Amazon Studios just snatched up.
rip 3:43 p.m.
24, Timeless, and Bosch Star Annie Wersching Dead at 45 She also played Tess in The Last of Us video game.
tributes 2:14 p.m.
Patti Smith, Flea, and More Remember Tom Verlaine Flea praised him as “one of the greatest rock musicians ever.”
overnights 1:16 p.m.
Saturday Night Live Recap: Michael B. Vulnerable Michael B. Jordan lets his guard down in an especially goofy episode.
michael b. monologuin' 12:19 p.m.
Michael B. Jordan Reminds Us He’s Single in His SNL Monologue He’s ready to rebound on Raya.
chat room 9:00 a.m.
Poker Face’s John Darnielle Wants to Hear the Rest of ‘Merch Girl’ Too “I’m about the 11th cleverest writer of my generation, but ‘Merch girl had nothing up her sleeve’ I was extremely happy with.”
rip Yesterday at 8:00 p.m.
Tom Verlaine, Influential Punk Guitarist, Dead at 73 The front man of the band Television worked closely with Patti Smith.
the vulture spot Yesterday at 7:00 p.m.
When Steph Curry Met Peter Nicks He Fumbled a Quesadilla  It’s hard holding a quesadilla while wearing four championship rings.
the vulture spot Yesterday at 5:23 p.m.
A Thousand and One’s AV Rockwell Felt Erased in New York  “Part of what made me feel the urgency to tell this story was I felt New York lied to us,” says the Sundance Grand Jury Prize-winning director.
fear factor Yesterday at 3:28 p.m.
Natasha Lyonne’s Accent Gets ‘More New York’ When She’s Scared “When I get nervous, I get more New York to, like, protect myself from strangers.”
in her (flea)bag Yesterday at 1:02 a.m.
Phoebe Waller-Bridge Has Found Her Next Archaeology Project The Indiana Jones 5 star will reportedly write a Tomb Raider TV show for Amazon.
sundance 2023 Jan. 27, 2023
A Complete List of Films Sold at Sundance 2023 (and Their Price Tags) Greenwich Entertainment picked up Nam June Paik: Moon Is The Oldest TV.
gma3 goss: what you need to know Jan. 27, 2023
Every Detail of T.J. Holmes and Amy Robach’s GMA3 Drama in Chronological Order The pair have now parted ways with ABC News.
gma3 goss: what you need to know Jan. 27, 2023
ABC News Is Breaking Up With T.J. Holmes and Amy Robach But the couple is reportedly eyeing lawsuits against the network.
the vulture spot Jan. 27, 2023
Fremont Is a Response to a ‘Fallacy’ About Women in Afghanistan  According to director Babak Jalali.
overnights Jan. 27, 2023
RuPaul’s Drag Race Recap: Unconventional-Material Girls A much-needed filler episode sets the stakes for the rest of the season.
the vulture spot Jan. 27, 2023
Ira Sachs Wanted to Make Passages for … Love  “What they do in front of the camera is quite aesthetically and erotically and emotionally engaging,” the director said.
oscars 2023 Jan. 27, 2023
The Academy Subtweets Andrea Riseborough’s Friends in Statement “We are committed to ensuring an inclusive awards process.”
chat room Jan. 27, 2023
Debra Jo Rupp Would’ve Liked to Do ‘a Little More’ on That ’70s Show “We had a lot of male writers. I understood that.”
coming soon Jan. 27, 2023
Nicole Kidman and Maya Erskine Find The Perfect Nanny They’re producing and starring in an HBO limited-series adaptation of the French novel together.
More Stories