Over the next few weeks, Vulture will speak to the screenwriters behind 2014’s most acclaimed movies about the scenes they found most difficult to crack. Which pivotal sequences underwent the biggest transformations on their way from script to screen? Today Richard Linklater discusses the second-to-last scene from his 12-years-in-the-making epic Boyhood, where Mason (Ellar Coltrane) packs up his things and prepares to head to college, leaving his mother (Patricia Arquette) behind. The scene is then excerpted below.

If there was one scene that felt like it was looming over all those years, it was the good-bye scene. I knew that the last shot of the movie would be Mason at college meeting someone — I had that in my mind for ten years, and I was looking forward to that — but I knew that the scene before it had to be the emotional break of the movie, when son parted from mom. It’s where Boyhood kind of ends emotionally, although spiritually, it continues.

So much of this movie was personal, and I had this image in my head for all these years of what my mom looked like when I said good-bye and went to college. She was just sitting there at a table alone, smoking a cigarette and uncharacteristically quiet. I could tell that she was very emotional, but she didn’t say that much. I’d had that image in my head during the 11 years of making this movie, but as we got closer to shooting it, I realized that I needed to flesh it out more with words. People say to me, “Did you have this scripted in advance?” and I say, “No, why would I do that?” We needed to live those 11 years first and experience them, not only in our lives, but let the characters live them, too.

So I started thinking more deeply about what they’d say to each other, and as with every scene during this storytelling process, I really had a year to dial down and work on the scene. A lot of that was talking to Patricia, Ethan [Hawke], Ellar — my collaborators — and even a lot of other people I was working with. At this point, my daughter Lorelai had gone off to college, one of my producers had a daughter who’d gone off to college, Patricia’s son had gone off to college a few years before, and so we knew the territory enough to riff with each other and talk about what that moment means. Patricia talked about how she took her kid to college and she got through it okay but then cried after she left, when she was alone on the way back. My producer Cathleen told me that she called her daughter from the airport after move-in and told her, “Just so you know, this is the worst day of my life.” And that struck a chord in me. I was like, “Oh, yeah! This scene is all about Mom.”

As a writer, I’m grabbing lines not just from friends and the world around me, but also from my collaborators on this particular project who know what this moment means. We all brought our personal experiences to it, within the confines of our ever-evolving script. Ethan told me that when he went off to school, his mother said, “I knew this day was coming, but I didn’t know you’d be so damn happy about it.” Parenting can be kind of a one-way street — you get so much, but what you give is not necessarily reciprocated. 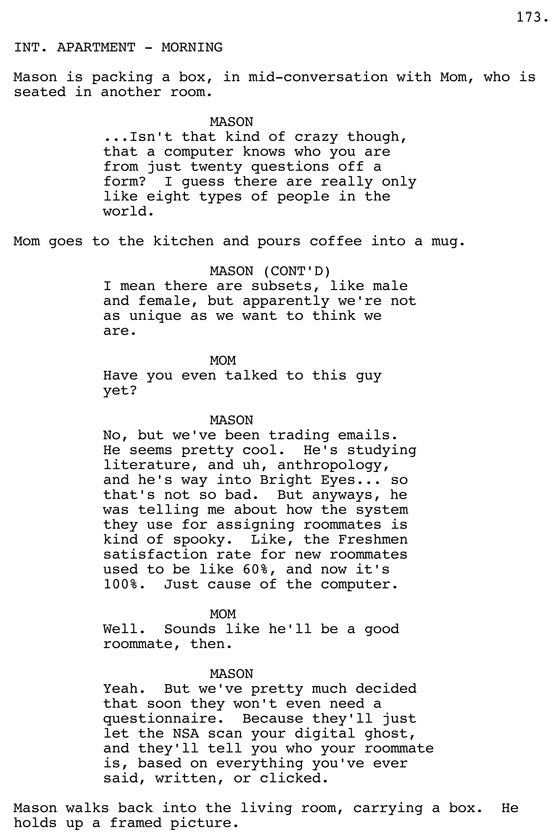 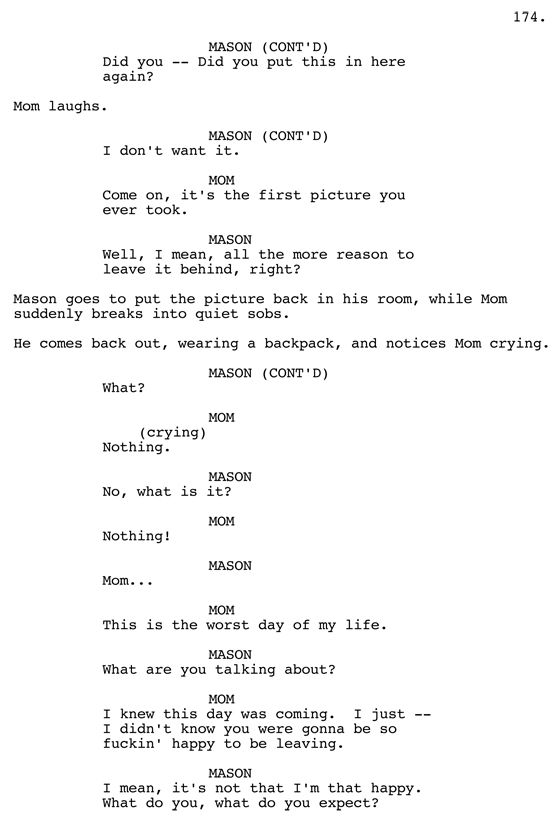 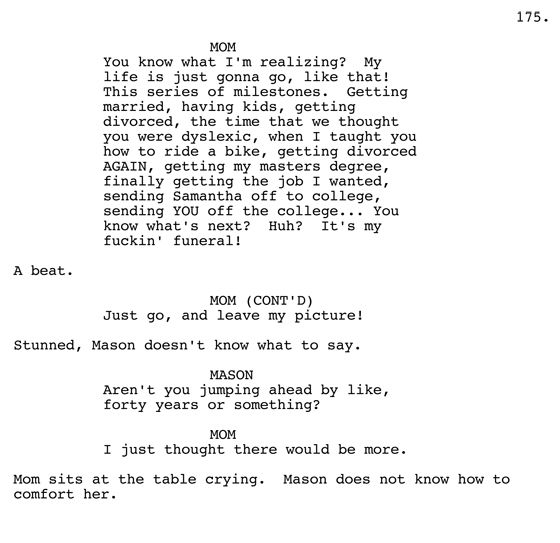 +Comments Leave a Comment
How Boyhood’s Saddest Moment Came Together

close read 28 mins ago
Luthen Rael Embodies Andor’s Gray Side In his similarities to Star Wars’ biggest villain, Stellan Skarsgård’s character challenges what we expect and accept from the franchise’s good guys.
comedy review 28 mins ago
Matt Rogers Makes the Yuletide Gay The comedian’s special, Have You Heard of Christmas?, is the gift that keeps on giving.
By Kathryn VanArendonk
overnights 4:00 a.m.
Fleishman Is in Trouble Recap: The Odyssey of Toby Toby’s attempts to impose his will on others are not going well.
respect the classics 1:25 a.m.
Dolly Parton Wants to Rock With Everyone on a New Album Parton told The Tonight Show that the album Rock Star would come out next fall.
tributes 12:33 a.m.
The Music Industry Mourns Fleetwood Mac’s Christine McVie Even Bill Clinton said goodbye to the Songbird.
performance art? Yesterday at 10:43 p.m.
The 1975’s Matty Healy Is Doing a Lot on Tour From kissing fans to eating raw meat onstage, here’s a roundup of what he’s been up to.
the law Yesterday at 9:13 p.m.
Judge Declared Mistrial in Danny Masterson Rape Case Jurors said they couldn’t reach a unanimous verdict.
overnights Yesterday at 9:00 p.m.
The Real Housewives of Salt Lake City Recap: Champagne Problems There’s no better way to remind someone of your Real Housewife status than pouring a glass of champagne on them.
development r'lyeh Yesterday at 7:25 p.m.
Guillermo del Toro Is Trying to Get At the Mountains of Madness Made Again This time as stop-motion.
coming soon Yesterday at 6:57 p.m.
Everything We Know About Amazon’s Fallout TV Show War never changes, but casting does.
coming soon Yesterday at 6:26 p.m.
Ang Lee’s Son to Star in Dad’s Bruce Lee ‘Passion Project’ The director’s biopic for the martial-arts icon will be a family affair.
new music Yesterday at 6:20 p.m.
SZA Puts Fans on Alert, Announces New Album S.O.S Set to come out in December. The album art dropped November 30.
songbird Yesterday at 5:59 p.m.
Stevie Nicks Memorializes Christine McVie, Her ‘Best Friend in the Whole World’ “I always knew I would need these words one day.”
vulture lists Yesterday at 4:00 p.m.
21 Great TV Christmas Episodes You Can Stream Right Now Mad Men, The O.C., 30 Rock, and more.
rip Yesterday at 3:30 p.m.
Christine McVie, Pillar of Fleetwood Mac, Dead at 79 The singer and songwriter joined the legendary rock band in 1970.
love fr Yesterday at 3:28 p.m.
Love Actually Is So White It’s ‘Stupid’ But 20 years isn’t too late for Richard Curtis to right those wrongs.
trailer mix Yesterday at 2:40 p.m.
You Know You Want to Check Out Cocaine Bear It’s a bear on cocaine.
book review Yesterday at 2:00 p.m.
Kathy Acker Wanted Everything Eat Your Mind, a new biography of the writer and punk feminist icon, is both maddening and compulsively readable.
By Sarah Chihaya
the bear claw Yesterday at 2:00 p.m.
A24 Got Its Beefiest Boys for The Iron Claw Zac Efron and Jeremy Allen White want to eat — I mean, beat — each other up.
vulture festival 2022 Yesterday at 1:44 p.m.
Of Course We Asked The Proud Family About Beyoncé’s Halloween Costume Imagine talking to Jo Marie Payton and not immediately bringing it up?
More Stories