With this week’s Sound and Visions series, Vulture explores the future of movies and the movie industry. We hope you’ll plug us directly into your cerebral cortex.

The comedians at College Humor inadvertently made a fantastic joke about the future of fillmmaking in “Nicolas Cage’s Agent,” a sketch that makes fun of Nicolas Cage’s oft-terrible career choices. In the bit, Cage’s agent tries to trick his client into finally turning down a role by making up an impossibly unviable role, complete with “real, unsimulated sex with a dolphin.” The kicker to this throwaway gag? “And it’s not going to be shot on film, but on Fruit by the Foot!” That joke made us wonder: If Fruit by the Foot is the future of filmmaking, what’s the future of watching movies going to be like? For answers, Vulture turned to some of our favorite science-fiction films to see how movies have imagined the future of movies.

Back to the Future II
When Marty McFly travels to the future, he’s given a bad case of future shock by a confrontational ad for Jaws 19, a new holographic 3-D film presented at the nearby Holomax Theater. This joke stands up particularly well since 3-D technology is apparently a deathless gimmick that won’t ever, ever go away. But hey, if you think the recent glut of real-life post-converted 3-D films is bad, just wait until the not-too-distant-future (this sequence takes place in October 2015), when you can be bullied into seeing a film if you’re not careful while walking in front of a movie theater. 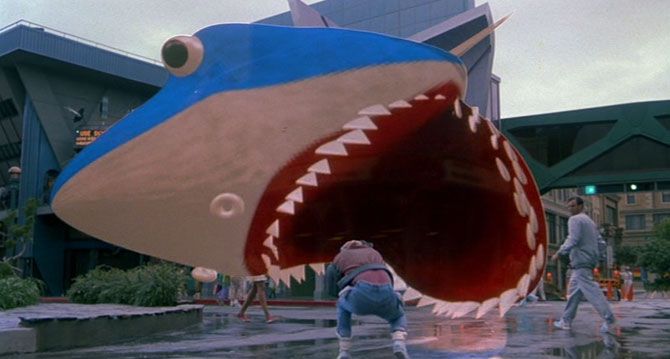 Idiocracy
In Mike Judge’s hysterically pessimistic dystopian comedy, Luke Wilson’s reluctant time-traveler discovers that the movies that most people watch are somehow even more degrading and dumb than they were in his day. The film’s omniscient but stupid-sounding narrator tells us that the “No. 1 movie in America was called Ass, and that’s all it was for 90 minutes. It won eight Oscars that year, including best screenplay.” Sure enough, when Wilson watches, uh, Ass, everyone (but him) laughs at what appears to be a series of farting noises. Later in the film, Wilson’s character takes a modest stand against the future’s progressive intellectual degeneration and takes aim at Ass: “[Movies used to make] you care about whose ass it was farting, and why it was farting. And I believe that time can come again!” Amen. 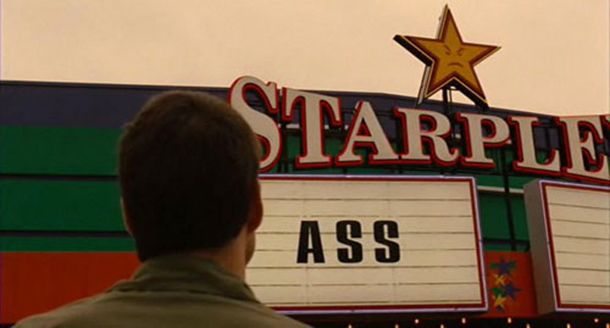 Dead-End Drive-In
Today video-on-demand companies and online-rental services like Netflix are slowly overtaking the communal experience of watching movies in movie theaters. But in Dead-End Drive-In, drive-in theaters are converted into concentration camps for society’s misfits. These theaters are largely frequented by criminals and/or young people, all of whom are robbed by scrap-collecting cops who pick over visitors’ cars and leave thrill-seeking motorists to subsist on junk food and exploitation films. Movies screened at the theater include real-life contemporary grindhouse fare, including Turkey Shoot, Dead-End Drive-In director Brian Trenchard-Smith’s deliriously goofy Death Race 2000 ripoff. 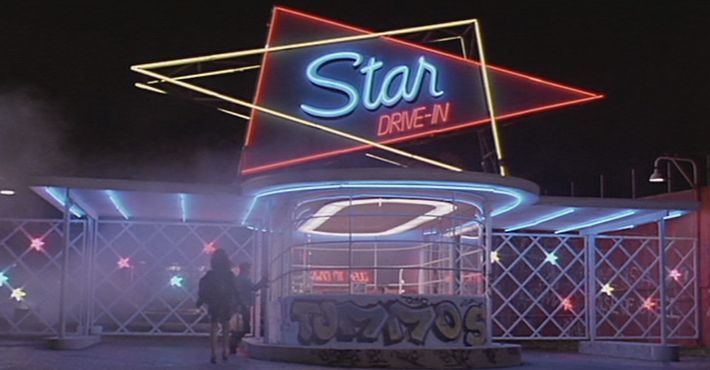 Reign of Fire
By contrast, movies require audience participation in Reign of Fire’s post-technological future. In that film, movies are reenacted before a campfire for a new generation of young post-film moviegoers, none of whom are familiar with the stories that are acted out from memory. In this scene, two survivors stage the scene from The Empire Strikes Back where Darth Vader cuts off Luke Skywalker’s hand. They sadly missed the chance to stage the scene from Return of the Jedi when C-3PO stages scenes from Empire and A New Hope.

Wall-E
Wall-E similarly presents watching movies as a way for alienated characters to reconnect with each other. That act of social reunification is essential in the film’s chilly, technologically based future. In Wall-E, humans have placed such a premium on convenient geegaws that a typically obese couple freaks out when their hands accidentally touch. By contrast, Wall-E endears himself to his robot companion Eve after he imitates the movies he obsessively pores over on his spaceship’s tiny viewing monitors. Eve initially doesn’t understand why Wall-E wants to hold her robo-hand, but she gets the idea after she sees a clip from Hello, Dolly.

Star Trek: First Contact
In Star Trek: The Next Generation and its subsequent movie spinoffs, Holodeck simulations allow crew members to reenact scenes from fictional and historical scenarios in a private virtual-reality chamber. The Holodeck is not, in that sense, really a movie theater in the traditional sense, since movies rely on passive spectatorship. Instead, the Holodeck requires human interaction, making moviegoing a team-building exercise. 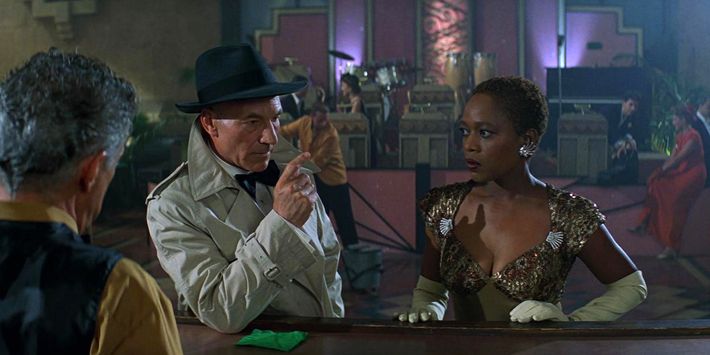 Brazil
Movies are a much-needed escape from bureaucracy in Terry Gilliam’s parodic vision of a fascistic future. In this scene, office drones sneak glimpses at Casablanca when their boss leaves them unattended. It’s hard to tell how Gilliam’s characters can stand watching the film-within-the-film on postage-stamp-size computer screens, which are simultaneously magnified and distorted by a bigger glass lens. But the believably schizoid way that Gilliam’s characters quick-change from hardworking bureaucrats to rapt spectators and back again suggests that moviegoers’ attention spans will soon be as small as their portable devices’ ever-shrinking screens. 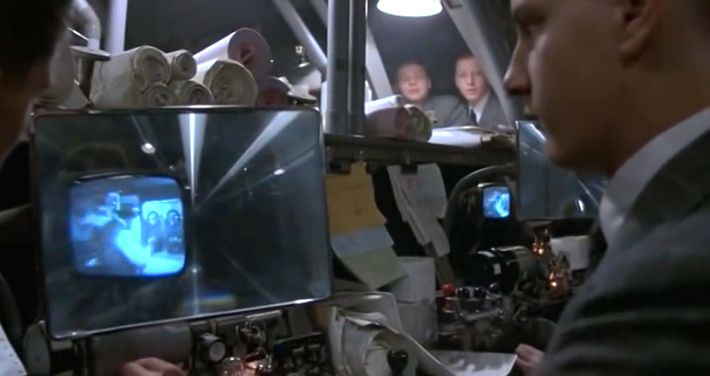 can't stream my poker face 12 mins ago
Did You Wait to Watch Poker Face? It Might Cost You New Peacock subscribers will have to pay for the service and no we’re not bluffing.
overnights 10:01 p.m.
Below Deck Adventure Season-Finale Recap: Fjord Explorer The crew tries to get their act together for the last charter, but it’s too late.
the vulture spot 7:38 p.m.
Harry Hamlin and His Stylish Jackets Are Magical on Mayfair Witches  Despite his character not having any powers.
trailer mix 6:18 p.m.
We Support Women’s Right to Electrocute Toni Collette and Auli’i Cravalho don’t know what to do with The Power.
ask an expert 5:42 p.m.
Alec Baldwin is Officially Charged in Rust Shooting. Now What? “There’s just a huge disparity in the charges.”
oscars bad boy 5:28 p.m.
Will Smith Is Back for His Movie-Star Bag With Bad Boys 4 Smith and Martin Lawrence ride together, make movies that make money together.
for your consideration 5:15 p.m.
A Timeline of Andrea Riseborough’s Controversial Oscar Nomination Within seven days, Andrea Riseborough’s performance in To Leslie went from obscurity to the toast of Twitter. And all it took was a few famous fans.
By Nate Jones
crime 5:08 p.m.
Alec Baldwin Charged With ‘Directly’ Causing Rust Shooting Prosecutors allege “no less than a dozen” negligent acts by Baldwin even before Halyna Hutchins was shot.
vulture sports 4:48 p.m.
The Oscars Bestow a Bounty of Points Upon the Movies Fantasy League Awards season is hitting its stride, and so are the top MFL teams.
bravo encore 4:38 p.m.
What’s Going on With RHONY: Legacy? Is she “dead”?
gods and monsters 4:07 p.m.
Chapter 1: Everything We Know About the Future of the DC Universe Congrats to Viola Davis, who remains the most unscathed DC Universe actor.
2 king 2 hill 3:48 p.m.
Travel Back to Arlen in a New King of the Hill Reboot Hulu announced a revival of the beloved series on January 31.
timelines 3:10 p.m.
The Complete History of Ezra Miller’s Controversial Career From kidnapping allegations to a plea deal for unlawful trespassing to the DCEU’s master plan.
chat room 2:48 p.m.
Nelson Franklin Is Thankful He’s Not the ‘Uglier George Santos” Comedy’s go-to That Guy discusses appearing in — or auditioning for — most of your favorite sitcoms.
celebrity memoirs 2:14 p.m.
Pamela Anderson Knows Even a Memoir Can’t Tell All Though there are not many new revelations, ten stories stuck out.
essential episodes 2:02 p.m.
Columbo Is the Ultimate ‘Rich People Are Weird’ Show Peter Falk’s rumpled detective takes down lots of wealthy loonies.
sad gay representation 1:18 p.m.
The Last of Us Fans Are Screaming, Crying, Streaming Linda Ronstadt “Long Long Time” is running (back) up that chart.
sundance 2023 1:04 p.m.
Sundance’s Year of Existential Crisis Yielded Back-to-Back Megadeals Insiders call this year’s Sundance a return to form, with several all-night bidding wars and multiple eight-figure deals.
By Chris Lee
funny videos of the month 1:00 p.m.
The Best Comedy Shorts of January 2023 Rounding up our favorite funny videos of the month.
By Luke Kelly-Clyne and Graham Techler
backstories 12:35 p.m.
‘There Couldn’t Be Any Normal Scenes in This Movie’ Damien Chazelle and his collaborators explain Babylon in three key scenes.
By Bilge Ebiri
More Stories