If you’re reading this, you managed to survive 2014 with your life and sanity mostly intact. Raise a glass for yourself, because, my God, what a horrible year this was. And raise a glass for “White Christmas,” the stunning year-end special of Charlie Brooker’s acclaimed Black Mirror: It plays like a worst-of-2014 retrospective, brutally and compellingly addressing the cancers that ate away at the world this year.

It’s all right here in this 83-minute episode: police brutality, men’s-rights activism, torture, pro-life fundamentalism, harassment of women, income inequality, even leaked nudes. All it’s missing is an Ebola outbreak. Previous installments of the British sci-fi anthology series (which, as of last month, you can legally stream in the U.S.) tackled one or two discontents of modernity at a time, but “White Christmas” is a delightfully overstuffed turducken of humanity at its worst.

Let’s address the handsome elephant in the room: Jon Hamm. The Mad Men sex god is one of the episode’s two stars, portraying a sort of evil bizarro counterpart to Don Draper. Well, he’s not really an evil counterpart — he’s basically just Don, if we were to remove any of Mad Men’s forgiving glow on the character.

He plays Matt, a gent who traffics in charm, seduction, and making people do what he wants. We meet him through the eyes of Potter (Rafe Spall), a man who wakes up in a snowbound cottage and finds Matt cooking up some potatoes for a Christmas meal.

What follows is a classic sci-fi setup, one that would fit right in with the show Black Mirror is most often compared to, The Twilight Zone: Potter can’t remember where he is, what he does, or — most terrifyingly — who his lantern-jawed housemate is. Nevertheless, Matt seems happy to see him and tries to get Potter to open up and have a friendly holiday chat about Christmases past. From there, the episode becomes a nesting doll of stories-within-stories, one that takes its time revealing how the men ended up in frigid isolation.

Matt tells a tale about his nights as the leader of a gang of online pickup artists. He and his compatriots would watch each other’s seduction sessions via eye implants (de rigueur for everyone in this near-future world and a nice callback to the similar eye implants of Black Mirror’s third episode, “The Entire History of You”) and simultaneously murmur pussy-hunting advice to one another through earpieces. It’s chilling how much we get drawn into Hamm’s unabashedly Draper-esque bullshit (“Engage in conversation, but be cynical, alright? Cutting. Like Bonnie and Clyde.”) while a mousy protégé goes in for the kill with a woman at an office Christmas party.

It goes well until it doesn’t, and without giving anything away, let’s just say “White Christmas” gives Gone Girl a run for its money in the category of “2014’s most horrifying bedroom death.” A panicked Matt tries to dispose of any hardware containing evidence of complicity in what happened, at which point we learn that, in addition to being a casual misogynist, he’s also a pathetic weasel, doing all of this on the sly while his wife’s asleep. Furious upon finding out how her husband spends his nights (as he underminingly puts it, she had a “dim view” of his art), she “blocks” him. In an age of eye-and-ear-computing, that means he becomes a blurry outline of static with an unintelligible voice, for as long as she wants him to be.

As it turns out, this phenomenon of blocking has plagued Matt and Potter, both in cases where the women they loved decided they’d had enough. In Potter’s case, the block came after a dispute over an abortion (he was against it, of course). Both of them feel deeply wronged by the block. 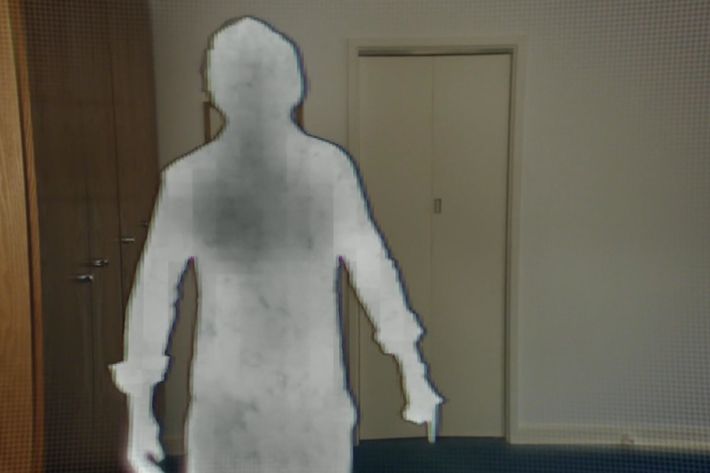 Their logic is the logic of any men’s-rights activist, especially the ones at the center of this year’s #GamerGate online terror campaign: Why are these women so afraid of a reasonable discussion? There are two sides to every story. How dare you judge the way I spend my free time? And how dare you ignore my opinions about what you do with your body? The irony here, as in countless misogynist Twitter rants, is that these men are so desperate for female approval and attention. After all, if they weren’t, why would it bother them so much to be ignored?

As if he weren’t living out enough loathsome modern male stereotypes, Matt also turns out to work in tech. He works for a company that creates “cookies” — disembodied digital replicas of wealthy buyers’ consciousnesses, which they use as personal assistants. Matt is, in essence, a torturer and slave-overseer, tasked with introducing the bewildered cookies to their new realities and breaking them. His methods are primarily mental, and much like the CIA’s torture artists, he seems alarmingly blasé about what he does. He doesn’t even seem to derive any sadistic pleasure from it. Indeed, if we saw him enjoying it, it might be easier to watch — at least we could fantasize about being that happy while committing evil acts.

It must be said that, although there’s an enormous amount of thematic meat to chew on (much of which I’ve left out for spoiler-prevention reasons, and don’t worry, there are twists and turns in abundance), “White Christmas” is eminently watchable, narratively thrilling, and never preachy. Indeed, it’s unclear what the message of the episode is. (It might simply be “ban men,” which, y’know, is always a fair point.) Sure, by the end of Matt and Potter’s Christmastime gab session, we’re meant to despise them — but we’re also forced to wonder whether they’ve been punished too much. The story gives no answers on that count.

Indeed, if you walk away from “White Christmas” thinking you’re morally absolved simply because you hate what the protagonists do, then you’re missing the point. There’s a key moment midway through the episode, when Potter denounces Matt for being so mean to the cookies. Matt smiles and warmly compliments Potter: “You’re empathetic. You care about people.” And he’s right. But Black Mirror is here to remind you that even empathetic people can ruin lives, and taking the moral high ground in an argument can’t fix the world. Oh, and if a Don Draper type tries to charm you? Run.

awards szn 7 mins ago
New York Film Critics Circle Gets the TÁR Love STÁRted Along with wins for RRR, Aftersun, and Marcel the Shell With Shoes On.
workaholics 24 mins ago
So You Thought BTS Was Going on Break? LOL A guide to their solo projects and upcoming group activities (so far).
overnights 1:33 p.m.
Slow Horses Recap: Walk Into It After the combustible season-two premiere, “From Upshott With Love” taps the brakes a bit too hard.
the industry 1:13 p.m.
What the Holiday 100 Reveals About Our Love of Christmas Music It’s Mariah’s world (obviously) — but Ariana and Kelly are settling into it.
going analog 12:42 p.m.
Patti Smith’s Worldview Finds a New Format in the Beautiful A Book of Days The punk icon’s visual artistry is on full display in her new photography collection.
vulture 10x10 12:11 p.m.
The Monopoly Puzzle 15-Across, Six Letters: Setting of Bella and Edward’s first kiss.
rip 11:27 a.m.
Julia Reichert, Acclaimed Documentary Filmmaker, Dead at 76 Known for the Academy Award–winning doc American Factory.
video games 11:13 a.m.
The Callisto Protocol Ups the Ick The spiritual successor to the survival-horror classic Dead Space doesn’t let the dread build.
vulture lists 11:00 a.m.
The 13 Best Christmas Action Movies, Ranked For when you want fiery explosions with a side of holiday cheer.
last night on late night 10:44 a.m.
Greta Gerwig Thought We Paid Enough Attention to Her to Notice She’s Pregnant Rumors I’m pregnant? Yeah, I’m pregnant with #GG3.
profile 10:00 a.m.
Brace Yourself for Jordan E. Cooper’s Ain’t No Mo’ In his bawdy Broadway debut, no one is safe.
By Tirhakah Love
this week in late night 9:33 a.m.
Kate Berlant’s Broth Grift Won Late Night This Week Plus James Corden yelling (in a good way) and James Austin Johnson’s perfect Bob Dylan impersonation.
overnights 7:01 a.m.
Slow Horses Season-Premiere Recap: Cicada New season, new book (Mick Herron’s 2013 novel Dead Lions, the second in his Slough House series), clean-ish slate.
overnights 6:01 a.m.
Mythic Quest Recap: Failing Up Poppy Li is rightfully taking her place as the true series protagonist, but that leaves Ian feeling a little lost.
the grub street diet 6:00 a.m.
Andy Baraghani Likes Some Lumps in His Potatoes “This recipe has three kinds of dairy — labneh, cream, and butter — which I don’t think is overkill.”
By Alan Sytsma
songbird 1:19 a.m.
Stevie Nicks Memorializes Christine McVie, Her ‘Best Friend in the Whole World’ Mick Fleetwood and Lindsey Buckingham have also shared statements mourning their late bandmate.
army assemble 12:08 a.m.
Let’s Go, Indigo: RM Has Dropped His First Solo Album Also blooming into his new era with a “Wild Flower” music video.
trailer mix Yesterday at 9:52 p.m.
The Guardians of the Galaxy Vol. 3 Trailer Gets You Ready to Say Good-bye Director James Gunn got the gang back together for one last movie.
overnights Yesterday at 9:00 p.m.
Winter House Recap: Getting in Touch All this drama over an alleged attempt to touch Austen’s crotch? Sure. Okay.
now streaming Yesterday at 9:00 p.m.
New on Paramount+: December 2022 1923, Top Gun: Maverick, Mariah Carey: Merry Christmas to All!, and more.
More Stories