Oh, Selfie, how little we knew you. Earlier this week, Hulu aired the 13th and final episode of the show following ABC’s cancellation after six episodes. We were essentially watching a zombie. The brilliant Phil Maciak called it “necro-streaming” — the show didn’t know it was already over. Unfortunately, right around the time that it was canceled,  another strange thing happened: Selfie found its center. Not unlike Eliza Dooley’s (Karen Gillan) own evolution, what started as a shallow conceit with a cringe-inducing title started to show off real charm and chemistry between leads Gillan and John Cho, who played Henry Higgs.

And while most freshman cancellations go unnoticed and un-mourned, Selfie whipped up enough passion in its short time for fans to circulate a petition first asking ABC and then Hulu (you can still sign it!) to save the show. Part of the reason was historic — Selfie was the first romantic comedy to star an Asian-American male lead on TV. But sadly, it wasn’t to be. And while Selfie’s cancellation is certainly not a tragedy on the level of Freaks and Geeks or My So-Called Life, it’s worth noting. Here’s why we’ll miss the show:

The romance was hot.
ABC announced Selfie’s cancellation the moment we got the first real whiff of romance between Henry and Eliza. And it simmered. Fates! Why do you taunt us so?

Oh, here that is again in GIF form: 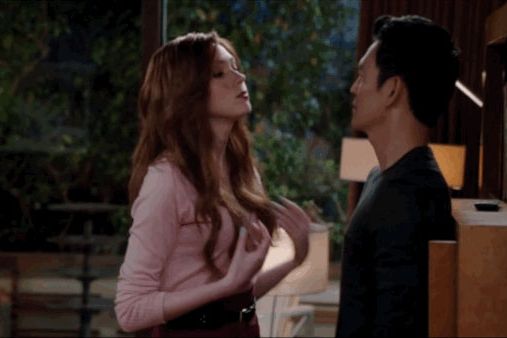 While I wouldn’t go so far as to call John Cho’s casting “revolutionary,” it was probably the first time on TV that an Asian guy literally RODE IN ON A WHITE HORSE.

Here's some behind the scenes shots from our #mudrun episode of #SelfieABC @MusePattiTroisi you've started a trend! pic.twitter.com/SlVHUNl5yJ

It featured the best use of Sia’s “Chandelier.”
I’m just as tired of The Voice covers and wacky YouTube video remakes as you are, but I entreat you to watch this clip where Karen Gillan sings the song at a company karaoke party. For some context, Eliza has just confessed her feelings for Henry, only to be rejected. Lovelorn, she ends up falling back on bad habits. It might be the first performance of the song — and yes, that includes Sia’s own — where I actually listened to it.

They’re as charming in real life as their characters are.
It’s been said before, but bears repeating: John Cho and Karen Gillan deserve better shows after this one. Selfie initially made Eliza out to be a cautionary tale of what happens to women who obsess too much over social media, but Gillan resisted that simplicity and filled Eliza out with a zany poignancy that actually endeared her to viewers. Here, Gillan explains how she came up with her SoulCycle-inspired American accent.

There’s always added pressure in becoming “the first,” but John Cho did Asian-Americans proud. Here, he masterfully deflects George Stephanopoulos’s question about how the producers came to cast him, an Asian dude, instead of a white British guy.

John Cho rocked out to Blues Traveler.
There is a delightful scene in the episode “Traumatic Party Stress Disorder” where Henry goes nuts at a Blues Traveler concert with Ron Funches. It’s not clipped on Hulu, but here’s a tasty look (hat tip: Pajiba). 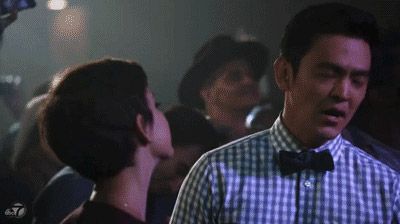 He does the air-harmonica solo. 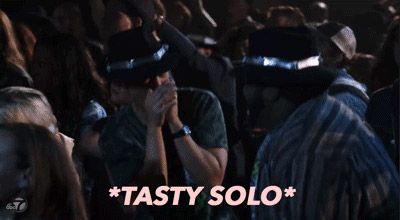 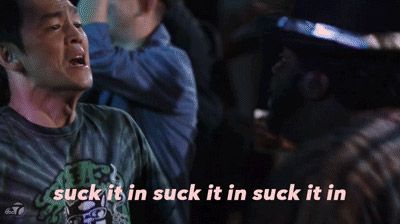 It gave us the best ending it could.
In the last episode, which aired on Tuesday, we got as much of an ending as we could have hoped for. No, Henry and Eliza don’t hook up (so we can’t add that to this list), but what we were left with is a little more than what we started with: the possibility that atypical pairings can not only work, but smolder. Henry, wearing a cast on his arm labeled “No Fear,” sits with a bunch of skateboarders who ask him why he didn’t hook up with Eliza. “What happened to ‘no fear’?” they ask. Henry thinks back on all the moments they had together before uttering the show’s final words: “Next time, I’ll be ready.” We sure hope so.

+Comments Leave a Comment
Let’s Pour One Out for Selfie

vulture lists 1329 seconds ago
The Best Books of 2022 Yes, this list features more than one book set in a postapocalyptic world, but have you looked around lately?
respect the classics 7 seconds ago
Neil Diamond Gives Us One Last Performance and It’s So Good, So Good The singer-songwriter, who’s living with Parkinson’s disease, had a surprise for his musical’s opening night.
collaboration 11:02 a.m.
Henry Koperski Waves Good-bye to Musical Comedy “If someone wants to write a big check for me to write more musical comedy I will, but it’s no longer something that comes from my heart.”
best of 2022 11:00 a.m.
The Best Podcasts of 2022 Forget the celebrity brand extensions. The art of podcasting is still as vibrant as ever.
karma's a relaxing thought 10:42 a.m.
Everything We Know About the Swiftie-Ticketmaster Lawsuit An attorney said more than 200 other potential plaintiffs have reached out since Friday.
best of 2022 10:29 a.m.
In 2022, Good TV Was a Gut Feeling Our critics break down what goes into naming the best of the year.
By Jen Chaney, Roxana Hadadi, and Kathryn VanArendonk
trailer mix 9:00 a.m.
Billie Piper Attempts a Comeback in the Trailer for I Hate Suzie Too The “anti-Christmas special” premieres on HBO Max December 22.
season's beatings 9:00 a.m.
Violent Night Was an Idea ‘Just Stupid Enough’ to Exist The guys behind the R-rated holiday shoot-’em-up still sound incredulous — not only that it overperformed but that it reached the screen at all.
By Chris Lee
gift guide 8:00 a.m.
Vulture’s 2022 Holiday Gift Guide Gifts for cinephiles, Industry stans, and Swifties who already have all the official merch.
overnights 8:00 a.m.
Welcome to Chippendales Recap: The Godfather IV The Chippendales’ expansion and Steve’s antagonism splinter the group further.
overnights 12:12 a.m.
His Dark Materials Season-Premiere Recap: Death Is Going to Die After a two-year wait, Asriel’s megalomaniacal campaign kinda … hits different.
last night on late night Yesterday at 11:53 p.m.
Teresa Giudice Says She Got Super-Close With Shangela (But Can’t Say Her Name) Or Shen Angela, as she kept saying.
overnights Yesterday at 11:01 p.m.
His Dark Materials Recap: Your Strength, My Guile Coulter loses at chess, Asriel does an enhanced interrogation, and Mary Malone plays an adventure RPG.
overnights Yesterday at 9:00 p.m.
Below Deck Recap: Seasick Is Camille the laziest worker to ever walk the deck?
obits Yesterday at 8:47 p.m.
Kirstie Alley, Cheers and Drop Dead Gorgeous Star, Dead at 71 She led two hit sitcoms, Cheers and Veronica’s Closet.
cancellations Yesterday at 8:27 p.m.
HBO Max Ghosts FBoy Island After two seasons of the Nikki Glaser–hosted show.
timelines Yesterday at 7:31 p.m.
The Complete History of Ezra Miller’s Controversial Career From kidnapping allegations to pleading not guilty to felony charges to the DCEU’s master plan.
theater Yesterday at 6:46 p.m.
Becky Nurse of Salem’s Dark Brew of Witchery and Dunkin’ Deirdre O’Connell nearly holds together Sarah Ruhl’s play set in modern Salem.
trailer mix Yesterday at 6:37 p.m.
Shudder Acquires Viral Horror Movie Skinamarink It opens in theaters January 13, 2023.
bong hive Yesterday at 6:36 p.m.
Robert Pattinson Awakes From Cryogenic Sleep As Mickey 17 Bong Joon Ho’s Parasite follow-up has a teaser trailer.
More Stories