Tonight, Allison Williams will don the green tunic to star in NBC’s Peter Pan Live! Since appearing in 1904, J. M. Barrie’s poignant tale, with its themes of eternal youth and defiled innocence, has inspired everything from Broadway musicals to arty erotica. Here, a timeline of the nostalgic and provocative cultural exploits of Peter, Wendy, Captain Hook, and the Lost Boys.

1904
Peter Pan, or the Boy Who Wouldn’t Grow Up, by Scottish journalist turned playwright James Matthew Barrie, premieres in London. Intended as a Christmas pantomime, the play features a girl as Peter (for practical reasons: Girls are lighter to lift in harnesses).

1924
After years of film studios’ pursuing his property, Barrie authorizes a silent-film adaptation by Paramount starring Betty Bronson. Tinker Bell is played alternately by a light on a fishing line and actress Virginia Brown Faire.

1930s and ’40s
The Peter Pan collar — named for the collar on Adams’s original costume — comes into vogue, popular especially on wedding dresses. It will resurface in the ’70s, and more recently with gamine celebs like Michelle Williams, Kirsten Dunst, and Alexa Chung and preppy brands like J.Crew.

1954
The Broadway musical directed and choreographed by Jerome Robbins, which is the template for the show we know today; Mary Martin is Peter and Cyril Ritchard is Hook.

1960
The Martin-Ritchard musical is televised, becoming a touchstone for generations of kids to come.

1975
A bronze statue of Peter Pan, created in 1928 for the Paramount Theater in Times Square, is installed within a cloistered garden in the Upper East Side’s Carl Schurz Park. In 1999, the statue is stolen; it is later recovered from the bottom of the East River.

1975
Composer Jim Steinman writes his short-lived musical Neverland: Three songs from it (“Bat Out of Hell,” “Heaven Can Wait,” “The Formation of the Pack”) become the beginnings of Meat Loaf’s Bat Out of Hell.

1976
NBC offers up a “Hallmark Hall of Fame” Peter Pan with a new (not terribly well-reviewed) TV-musical production, starring Mia Farrow as Peter and Danny Kaye as Hook.

1983
Dr. Dan Kiley writes Peter into the pop-psychology pantheon with his The Peter Pan Syndrome: Men Who Have Never Grown Up. A year later, his The Wendy Dilemma advises ladies in relationships with Peter Pans.

1990
Fox Kids debuts Peter Pan and the Pirates, a series that follows the Darling children’s further Neverland adventures. Jason Marsden, as Peter, and Tim Curry, as Hook (he’ll win an Emmy for the role), lend their voices.

1990
Broadway revival No. 2, with former gymnast Cathy Rigby as Pan. She’ll make a second career out of playing Peter. 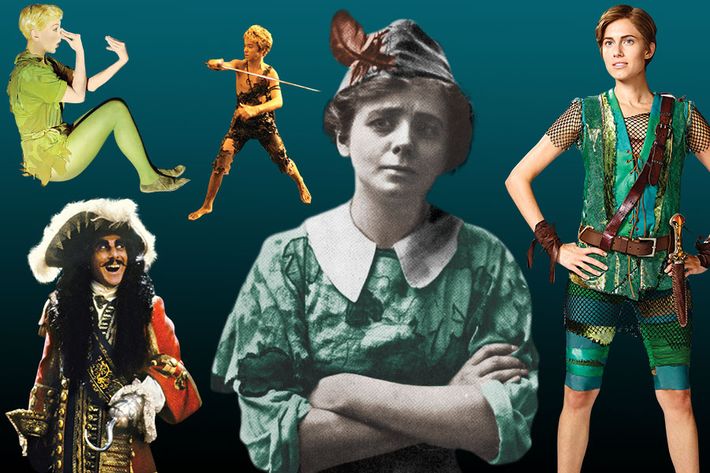 1991
Broadway again, Rigby again, but this time with J. K. Simmons as Mr. Darling and Hook!

2003
In a documentary, Michael Jackson tells Martin Bashir, “I am Peter Pan in my heart,” also admitting he has shared his bed with children at his Neverland Ranch. Though Jackson had been accused of child molestation, many experts agree that his childlike behavior is not typical of pedophiles.

2003
At age 16, Kendrick Lamar raps: “I’m from the land where fiends fly like Peter Pan,” on his very first mix tape.

2004
Johnny Depp gets sentimental as a young Barrie who meets the family that inspires his book in Marc Forster’s Finding Neverland; seven Oscar noms ensue.

2004
Manga! A Peter-like character named Air spirits a young man away to be his father in Kaname Itsuki’s Lost Boys.

2009
On “Successful,” from his So Far Gone mix tape, Drake boasts, “This lost boy got fly without Peter Pan.”

2010
Milwaukee Ballet’s Peter Pan, choreographed by Michael Pink, complete with a crocodile that crawls along the orchestra pit, plays to sold-out audiences.

2011
Coldplay sprinkles Pan references throughout its Mylo Xyloto album: “Charlie Brown” nods to the Lost Boys, and “Major Minus” references the crocodile with a ticking clock in its stomach that ate Hook’s hand.

2012
In the video for “Bangarang,” EDM star Skrillex references Hook, with the Lost Boys depicted as grown-up hoodlums. The song’s title is the battle cry of the film’s Lost Boys.

2013
Peter appears as a character on Once Upon a Time; later, he is revealed to be Rumpelstiltskin’s father.

2013
On “Domo 23,” from his Wolf album, Tyler, the Creator raps, “Hit me on my beeper while Captain Hook suck my Peter / Pan camera, repeat procedure.”

2013
London photographer Kate Elliott begins “The Study of Peter Pan,” an ongoing project that aims “to capture someone at the point in adolescence between childhood and adulthood, and to freeze that moment.”

2015
In April, an $11 million musical adaptation of Finding Neverland is scheduled to open on Broadway. Come July, Joe Wright directs Hugh Jackman and Levi Miller (as the title character) in the fantasy adventure Pan.

*This article appears in the December 1, 2014 issue of New York Magazine.

+Comments Leave a Comment
A Timeline of All Things Peter Pan

one perfect scene 1 min ago
A Hell of an Introduction How director Romain Gavras and his cast and crew created the year’s wildest movie opening.
By Bilge Ebiri
book review 19 mins ago
When Grief Returns Again, and Again, and Again … In her time-looping novel The Furrows, Namwali Serpell’s deft use of repetition makes the plot feel dynamic even as she retells the same story.
vulture picks 8:00 a.m.
25 Notable New Releases Over the Next Two Weeks Bella Hadid joins Ramy, Hasan Minhaj’s latest Netflix special, Pavement reunites, and more.
overnights Yesterday at 10:10 p.m.
House of the Dragon Recap: A Bad Egg Like it was for the Starks in early Game of Thrones episodes, the stakes for child’s play are high for these little Targaryens.
overnights Yesterday at 10:00 p.m.
American Gigolo Recap: Even Faster, Johnny This week, American Gigolo gets a little sleeker (if not sexier).
fire and blood Yesterday at 10:00 p.m.
Who’s Who in Westeros: A House of the Dragon Character Guide Keeping up with the Targaryens after episode six.
overnights Yesterday at 9:00 p.m.
The Serpent Queen Recap: The Melon and the Eggplant Catherine and Diane are now united, which makes for great television.
obits Yesterday at 8:35 p.m.
Dale McRaven, Mork & Mindy and Perfect Strangers Creator, Dies The star-making producer was 83.
behind the scenes Yesterday at 7:05 p.m.
Leslie Grace Shares New Behind-the-Scenes Footage of Batgirl on TikTok Including Brendan Fraser’s Firefly.
love can build a bridge Yesterday at 6:48 p.m.
Wynonna Judd on Touring Without Her Mother “I really miss you. Why aren’t you here so we can argue?”
injuries Yesterday at 6:06 p.m.
Post Malone Hospitalized With Breathing Difficulties, ‘Stabbing Pain’ He promised fans he would reschedule his Boston concert.
rihannaissance Yesterday at 5:39 p.m.
Rihanna to Headline 2023 Super Bowl Halftime Show The most important person the NFL has ever drafted.
darling we're worried Yesterday at 3:15 p.m.
How Did Don’t Worry Darling Become So Worrying? A timeline of the (alleged) drama involving Olivia Wilde, Harry Styles, and Florence Pugh.
trailer mix Yesterday at 1:38 p.m.
Jennifer Lopez Goes Full John Wick in The Mother Teaser Complete with training montage.
retirement Sept. 24, 2022
James Earl Jones May Be Hanging Up His Darth Vader Helmet Filmmakers recreated his voice on Obi-Wan Kenobi.
trailer mix Sept. 24, 2022
You Goes to College in Season 4 Teaser Meet “Professor Jonathan Moore.”
coming soon Sept. 24, 2022
Manifest, Netflix’s Most Unhinged Show, Is Back for a Fourth Season Whoever manifested more Manifest will be very pleased come November 4.
coming soon Sept. 24, 2022
Glass Onion: A Knives Out Mystery Gives Us Our Second Clue (a Clip) Daniel Craig returns to investigate the goings-on of Edward Norton’s Greek island.
coming soon Sept. 24, 2022
Watch Naomi Watts + Bobby Cannavale Watch for the Watcher in The Watcher Trailer Only Ryan Murphy would harass us with a promo this bewildering.
coming soon Sept. 24, 2022
The Crown Season 5 Returns to the Throne The royal family is coming back to Netflix.
More Stories