Over the next few weeks, Vulture will speak to the screenwriters behind 2014’s most acclaimed movies about the scenes they found most difficult to crack. Which pivotal sequences underwent the biggest transformations on their way from script to screen? Today, Vulture spoke to Ira Sachs and Mauricio Zacharias, who co-wrote Love Is Strange (which Sachs directed). The scene they chose is then excerpted below.

Our film is about an older couple, Ben (John Lithgow) and George (Alfred Molina), who have been living together for almost 40 years, who are forced to live apart due to circumstances beyond their control. The toughest scene for us to write was one that occurs late in the movie, when the two men are reunited for the first time after weeks of living separately. On a rainy night, George arrives at Ben’s door to tell him he’s sorry, to give him a hug, to feel his husband’s warmth, and to share the grief. As soon as he sees Ben’s face, George can’t hold it in any longer and he has a good cry, in front of Ben’s family. It’s clear he’s not going to return that night to the couch he had been sleeping on; instead, he’s going to spend the night sharing a bunk bed with Ben in his nephew Joey’s bedroom.

Even before we actually started writing the screenplay, we were debating if this couple who love each other so much, and have been together for so long, was going to have sex on creen. There was some anxiety surrounding the subject, about the possibility of our actors not feeling comfortable, and of how the audience might react. Older people are rarely seen engaging in sex on the big screen, so we put the idea aside temporarily, pledging to be true to our characters: We would let them decide.

And now, there they were. The two of them in the same room after a period of separation. Were they going to have sex? We looked at these people and realized that at this point in their lives, after been together for 40 years, what they missed most was the embrace at night; they missed each other’s bodies, but not necessarily sex. George is on the upper bunk, chatting with Ben down below. Ben can’t hear him very well and asks George to come down. We brake the ice with a joke about how the family would react if the men are found in their nephew’s bed having sex. And we use geography — the actual wobbly structure of the bed — to further explore the uneasiness of the situation. At last, they’re in each other’s arms, and the scene ends with Ben confessing that, more than anything, the situation they find themselves in is “really fucking” with his sleep patterns. Now, holding each other in the same bed, they’re finally able to go to sleep. And for the audience, everything changes in this scene also: The stakes rise, the relationship deepens. It is now clear what these men have to lose: the intimacy of that bed, that embrace, each other. 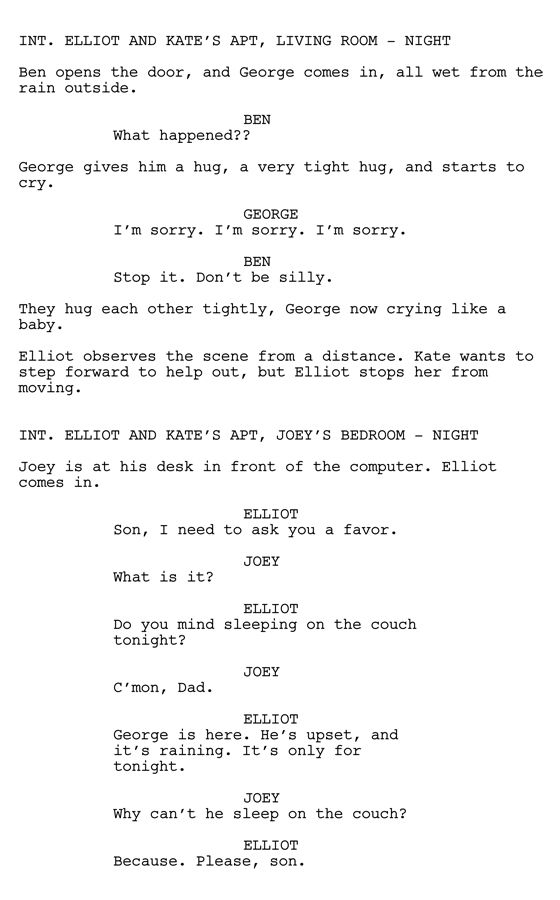 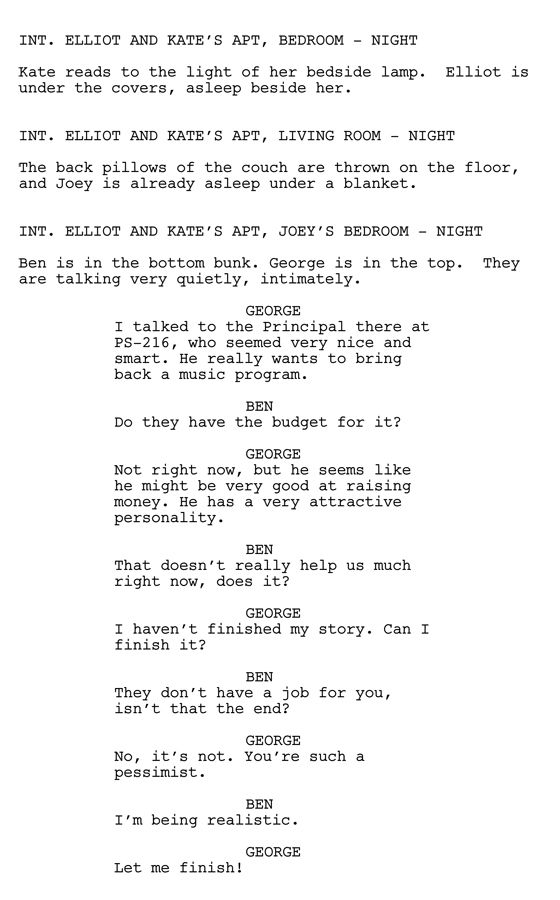 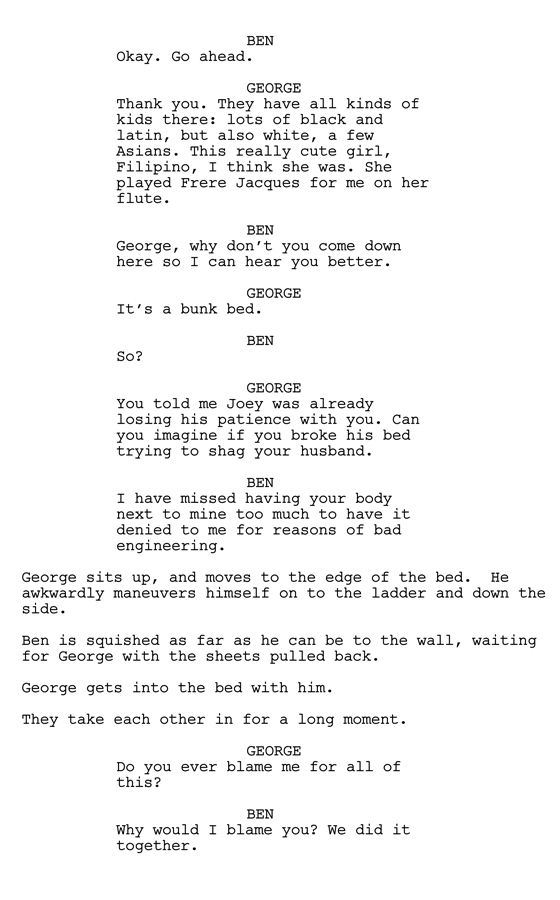