Over the next few weeks, Vulture will speak to the screenwriters behind 2014’s most acclaimed movies about the scenes they found most difficult to crack. Which pivotal sequences underwent the biggest transformations on their way from script to screen? Today we put that question to a very reluctant James Gunn, who admits that there’s still one scene in his summer megahit Guardians of the Galaxy that he doesn’t think he quite nailed. The scene is then excerpted below.

Oh, I hate this! This is terrible, terrible. What I don’t like is that if you ask me which scenes were the hardest, they’re also the ones that, frankly, I like the least. I really would love to talk about, say, the “12 percent” scene and say that was the most difficult, but no, I kinda sat down and wrote that dialogue and then it was done.

There’s pressure with Thanos because you’re setting up this gigantic character that, in one way, isn’t really a part of your movie. His presence doesn’t really serve being in Guardians, and having Thanos be in that scene was more helpful to the Marvel universe than it was to Guardians of the Galaxy. I always wanted to have Thanos in there, but from a structural standpoint, you don’t need him. So that’s part of it, and then part of it is the fact that you’re setting up this incredibly powerful character, but you don’t want to belittle the actual antagonist of the film, which is Ronan. You don’t want him to seem like a big wussy. So how do you make that work?

And that’s why Ronan kills T=the Other. I thought that was interesting, because we’ve had the Other, who’s obviously very powerful even in comparison to Loki, and then we see Ronan wipe his ass with him. So that I liked, but even that was sort of difficult, because it played as funnier when I first wrote it, and the humor didn’t work so much. But the scene does have what’s probably my favorite Nebula moment in the movie, when she’s strutting out of there saying, “Thanks, Dad.” And she’s also saving Ronan’s ass, because she knows that Ronan’s a hothead.

This scene does set up the later scene between Thanos and Ronan — which I like! That scene, to me, makes Ronan kick ass. He tells Thanos, “Fuck you! I’m coming for you!” That makes Ronan not admirable, but … well, sort of admirable! It’s the one really great Ronan moment in there, along with some of the ritualistic stuff he’s doing at the beginning. So I liked that moment, but the middle scene was one of the tougher things I wrote. 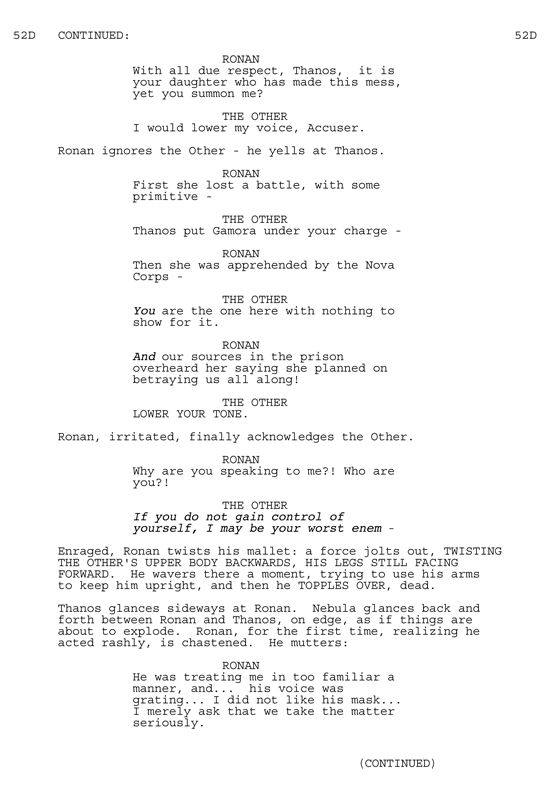 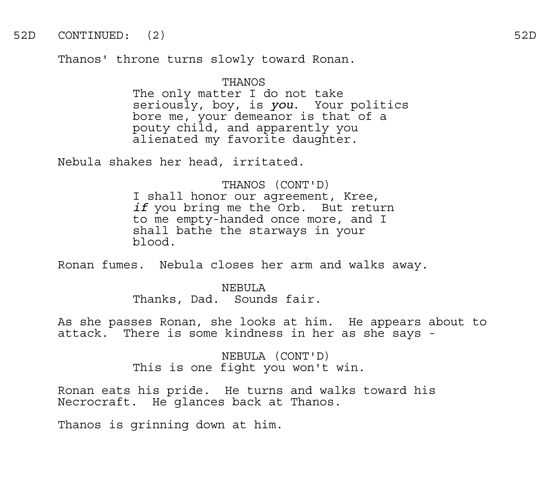 overnights 7 mins ago
Surface Recap: Excess Baggage Sophie’s trippy evening reveals interesting things about Baden, James, and Caroline.
what we know 27 mins ago
Salman Rushdie Stabbed and Seriously Injured During Speech in New York A man leaped onstage and violently attacked the author, whom Governor Kathy Hochul says is alive.
what a tease! 1:51 p.m.
Beyoncé, Professional Tease, Releases an Almost Music Video for ‘I’m That Girl’ Now can she try being “that girl” who releases music videos?
comedy review 1:12 p.m.
This Fool Is What Streaming Comedies Should Be And a just world would give us several more years of it.
By Kathryn VanArendonk
breakups 12:35 p.m.
Michelle Branch Announces Her Separation From Black Keys’ Patrick Carney Branch was arrested for misdemeanor domestic assault shortly after the announcement.
dinner party 12:09 p.m.
Why Are We Watching Industry? On the perverse pleasures of witnessing the worst people do the worst possible things.
housewives institute bulletin 12:00 p.m.
The Ultimate Real Housewives Trivia Quiz Brought to you by the esteemed members of the Housewives Institute. How many can you get right?
overnights 12:00 p.m.
A League of Their Own Recap: The Crab Boil Casey “Dove” Porter is no Jimmy Dugan.
vulture 10x10 12:00 p.m.
The Brooklyn Puzzle 21-Across, Eight Letters: Magic Mike performance.
the theater 11:42 a.m.
Broadway’s Into the Woods Announces Power-Couple Casting Stephanie J. Block and Sebastian Arcelus, real-life husband and wife, will step into the lead roles.
this week in late night 11:41 a.m.
Kaitlin Olson Roasting Her Husband Won Late Night This Week Plus Megan Thee Stallion’s dog stealing the show and money lover Mindy Kaling.
now streaming 11:33 a.m.
The 7 Best Movies and TV Shows to Watch This Weekend Including A League of Their Own, but gayer this time!
overnights 11:09 a.m.
Never Have I Ever Recap: Trollhunter It’s admirable of Never Have I Ever to navigate the gray areas of the Paxton/Devi/Haley dynamic.
departures 10:49 a.m.
Jon Batiste Leaving Late Show for His True Calling: Winning More Grammys Interim bandleader Louis Cato will take over fully.
overnights 10:23 a.m.
For All Mankind Season-Finale Recap: All My Good Dumplings Another big-swing finale does a nice job making some concluding remarks on what unites these precious (and in one case, literal) space babies.
overnights 9:50 a.m.
Never Have I Ever Season-Premiere Recap: The Odd Couple The gossip and pressure of being the school’s hottest and unlikeliest couple get to Devi.
overnights 9:45 a.m.
A League of Their Own Series-Premiere Recap: Play Ball Batter up! Hear that call! The time has come for one and all…
collabs 9:13 a.m.
Beyoncé Is the Girl to Make Ronald Isley & the Isley Brothers Say It Again Listen to their new duet of the 1975 hit “Make Me Say It Again, Girl.”
movie review 9:00 a.m.
Emily the Criminal Isn’t Interested in Empathy Aubrey Plaza is great as a woman caught between crushing loans and a felony record who embarks on a surprisingly gritty criminal side hustle.
By Alison Willmore
role call 8:46 a.m.
Kate Bosworth Answers Every Question We Have About Blue Crush On competing for the lead role with Jessica Biel, eating sand during her audition, and surviving the “cruel” streak of the early 2000s.
By Ilana Kaplan
More Stories