Vulture is speaking to the screenwriters behind 2014’s most acclaimed movies about the scenes they found most difficult to crack. Which pivotal sequences underwent the biggest transformations on their way from script to screen? Today we spoke to writer-director Justin Simien about the party scene near the end of his racial satire Dear White People that brings together adamant Sam (Tessa Thompson), privileged Troy (Brandon P. Bell), the eager-to-assimilate Coco (Teyonah Parris), and the ambivalent Lionel (Tyler James Williams).

The blackface party scene was really tough to write. It’s a multi-protagonist story, and there are so many ways to do that. One way is to sort of let every character have their own movie, and as the story progresses, we bounce around between them — but because of story economics and the economics of getting the movie made under 107 pages, I opted for the Do the Right Thing approach, where after each major act break in the movie, we get a different protagonist. Sam’s character brings us into Act Two, Troy and Coco share the midpoint of the film, and Lionel is the one who actually has the big revelation that brings us into Act Three.

That’s tricky, though, because all of those characters still have to pay off in the party scene. To do that organically, where it’s believable that they all have some kind of character awakening on the same night … well, it’s not about that one scene. It’s about making sure that all of those moments are very well-planted throughout the story so that the payoff feels authentic and earned. That was one of the many reasons that scene was tricky, because when I got to it and it wasn’t working, it’s because a million things before it weren’t working, so I would try to do drafts just for certain characters. I would read the script just for Sam, just for Lionel, just for Troy or Coco — and then read it as a whole to see if it was working.

One of the biggest things that had to happen in the party scene is a payoff for Lionel, who’s spent most of the film not choosing a side in the great debate happening on campus. This is the moment where he finally feels moved enough by the events of the story to not only choose a side but do something about it, but for him to get to that place, every moment up until then for him had to be about people trying to push him into choosing a side against his will. That was the first thing I had to get right. I had to set up all of his little attachments to the other characters because we would feel it instantly if that work wasn’t done. That required me not only to rework that scene, but to rework every character strand.

But everybody has their a-ha moment here. Sam takes on the role of “activist” more authentically, Troy stands up to his father, and Coco has an interesting moment, having taken on this ghetto black persona to win favor with these kids, where she has this visceral reaction to the party like Lionel does. Still, I didn’t think it was realistic for Coco to have a complete about-face in that moment, so when Sam sees her and she feels judged by Sam, what does she do? It took a lot of time to figure out what she would say there, and she ends up delivering a monologue about “white people want to be us” that a lot of people come up to me and talk about. I think it strikes such a chord because it’s such a complicated moment — she’s defending herself and defending this party, but what she’s saying is also kind of true. That’s the thing: I was always trying to figure out new ways to continue to twist the screw, so that a moment in a scene could say as many things as it would say in real life. 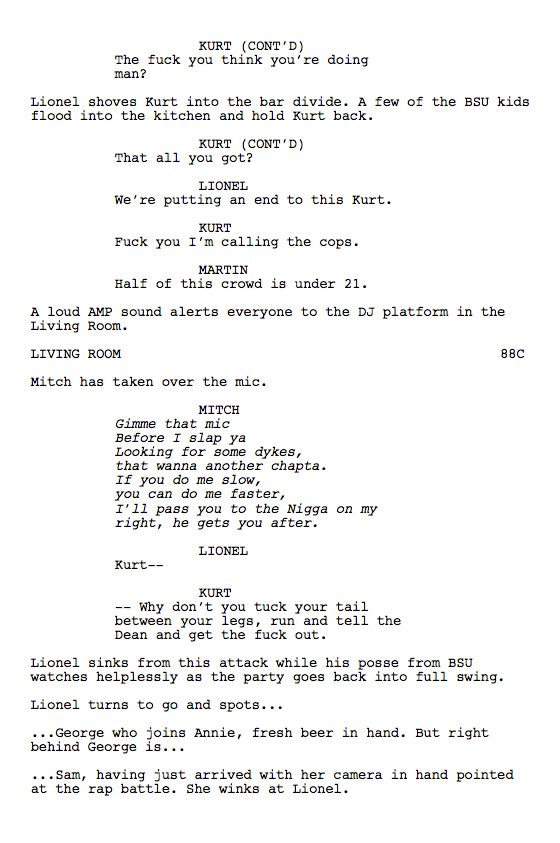 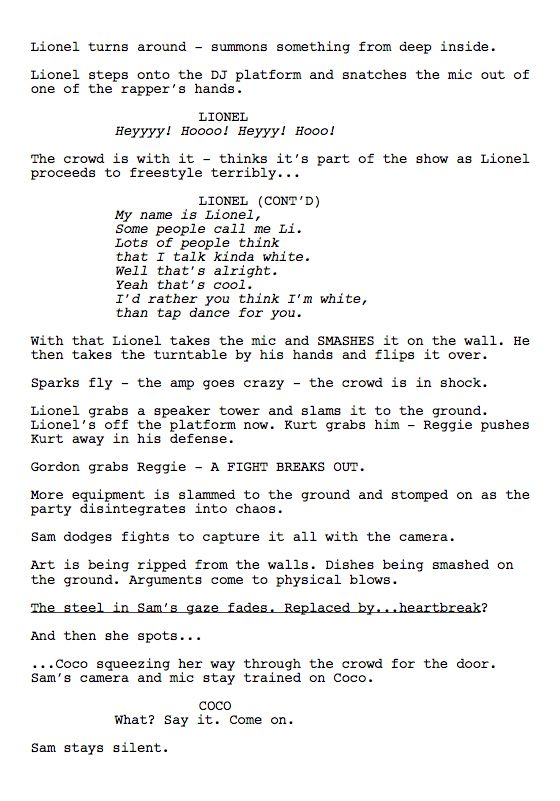 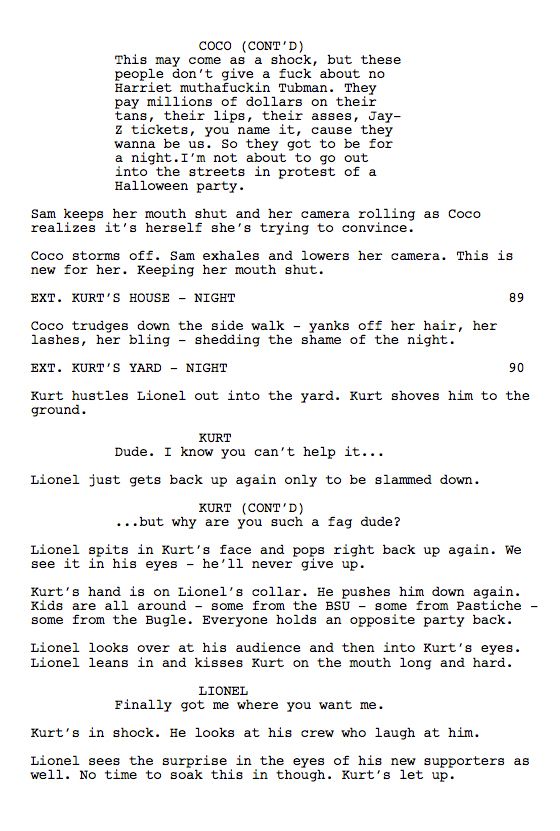 album review 17 mins ago
How Does That Make You Feel, Kendrick? Whatever your problem, Mr. Morale & the Big Steppers wants you to talk it through.
another one 1:00 a.m.
Kourtney Kardashian and Travis Barker Got Married (Again) Sealed with the Kris of approval.
tragedy Yesterday at 11:23 p.m.
Kristin Chenoweth Is ‘Haunted’ by Her Connection to Oklahoma Tragedy “It has stuck with me my whole life. I could have been one of them.”
house tour Yesterday at 10:15 p.m.
Harry Styles Moved Into Harry’s House While Touring Fine Line “I feel like I got to hide a secret this whole time.”
overnights Yesterday at 10:05 p.m.
Better Call Saul Recap: Been Caught Stealing Kim is never quite who we expect her to be, is she?
overnights Yesterday at 10:01 p.m.
We Own This City Recap: High-Speed Chase This week details Wayne’s modus operandi, both as a crook and the ultimate cop’s cop.
overnights Yesterday at 9:00 p.m.
Below Deck Sailing Yacht Recap: Vomit in the Shower Ashley…
overcome with emotion Yesterday at 8:15 p.m.
Daria Spinoff Jodie Announced As Film, Cast Includes Pamela Adlon and Kal Penn Tracee Ellis Ross will play the titular role in the film.
under oath Yesterday at 6:26 p.m.
Johnny Depp’s Lawyer Starts to Cross-Examine Amber Heard  Things are going to get even uglier.
the lost kingdom Yesterday at 5:57 p.m.
Amber Heard Says Her Aquaman 2 Role Was ‘Pared Down’ She claims Johnny Depp damaged her reputation by calling her abuse allegations a “hoax.”
overnights Yesterday at 5:53 p.m.
Conversations With Friends Recap: Get Out of Town Good-bye, dreary Ireland. Hello, unimaginably luxurious Croatia!
vulture lists Yesterday at 4:30 p.m.
Every Stephen King Movie, Ranked With Firestarter in theaters, we take a deeper look at all of the horror master’s films.
overnights Yesterday at 4:05 p.m.
Conversations With Friends Recap: Are We Still Having an Affair? In which we all collectively scream, “Put the phone down, Frances!”
opera review Yesterday at 3:03 p.m.
Brett Dean’s Hamlet Is Too Mad for Its Own Good Yet there is method in ’t.
fan encounters Yesterday at 2:23 p.m.
Cara Delevingne Hot Girl Summers Too Close to the Sun Attending the BBMAs as Megan Thee Stallion’s plus-one and/or assistant.
hole-some content Yesterday at 1:52 p.m.
Outer Range’s 15 Hole-iest Moments, Ranked Life is short, let’s talk about a hole.
going to hollywood Yesterday at 1:07 p.m.
X Factor Alum Replacing American Idol Winner on The Voice Camila Cabello takes over for Kelly Clarkson this fall.
vulture 10x10 Yesterday at 12:00 p.m.
The Hot Puzzle 3-Down, Four Letters: MacGuffin in a heist movie, maybe.
overnights Yesterday at 10:55 a.m.
90 Day Fiancé Recap: Bringing Up Baby Kudos to Emily’s parents for staying out of this fight.
bbmas 2022 Yesterday at 9:02 a.m.
The Highs, Lows, and Whoas of the 2022 Billboard Music Awards Whoa: A fever dream of an opening.
More Stories