Over the next few weeks, Vulture will speak to the screenwriters behind 2014’s most acclaimed movies about the scenes they found most difficult to crack. Which pivotal sequences underwent the biggest transformations on their way from script to screen? Today, writer-director Damien Chazelle explains why the first scene of Whiplash sets up everything you need to know about the relationship between Andrew (Miles Teller) and his tyrannical music teacher Fletcher (J.K. Simmons). The scene is then excerpted below.

I knew I wanted to begin the movie with my main character drumming. I wanted it to be almost reductive: stick all the movie’s main ingredients into the first few minutes. Drummer, music school, mean teacher. No beating around the bush. Cram the entire movie in miniature into the opening scene.

The upside was that, hopefully, I’d grab the audience’s attention right away. (Always a worry given the pitch for this movie began with the words jazz drummer.) On the other hand, if the opening moments didn’t land, I was in trouble. I had nothing else up my sleeve: The movie was this scene. It was the scary teacher going after the scared student. The subsequent 100 minutes of the movie are just a replay of this same scene, in different guises.

I like movies that do that — establish a theme right away, then perform a series of variations on that theme. To me it’s a very musical way of approaching storytelling. I reworked the scene to make sure it was as clearly articulated as possible. The first pass was seven pages; I got it down to five, then four, then finally three. It was about squeezing everything I needed — the setting, the tone, the introduction of the movie’s protagonist and antagonist, the immediate conflict — into as little time as I could manage. Then, when we shot it, my editor and I wound up trimming a few more lines of dialogue.

A bigger challenge than tightening the scene wound up being, how do you make Fletcher, the teacher, scary? He hasn’t screamed yet. He hasn’t done anything physical. But we have to feel his power, and his ability to inspire fear, right from these early moments. I found keeping his language simple and stark was helpful. He is the epitome of no-bullshit. And he has poise, whereas Andrew, the main character, just flails. The aborted double-time swing becomes the key to their entire relationship: Andrew trying and failing to live up to the standard Fletcher has set for him — and Fletcher turning the whole thing into a joke, but still a joke that stings.

Along those lines, the place-setting title card at the end of the scene felt like a nice punch line to me. Welcome to school. 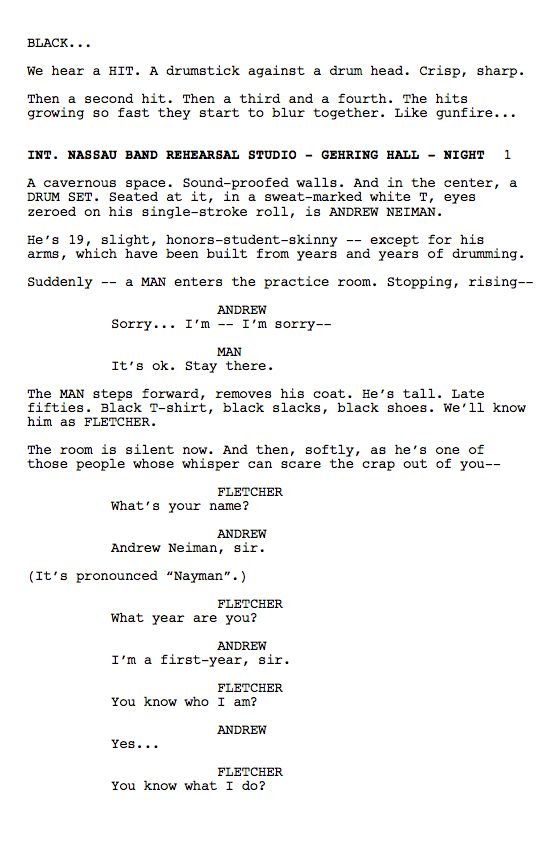 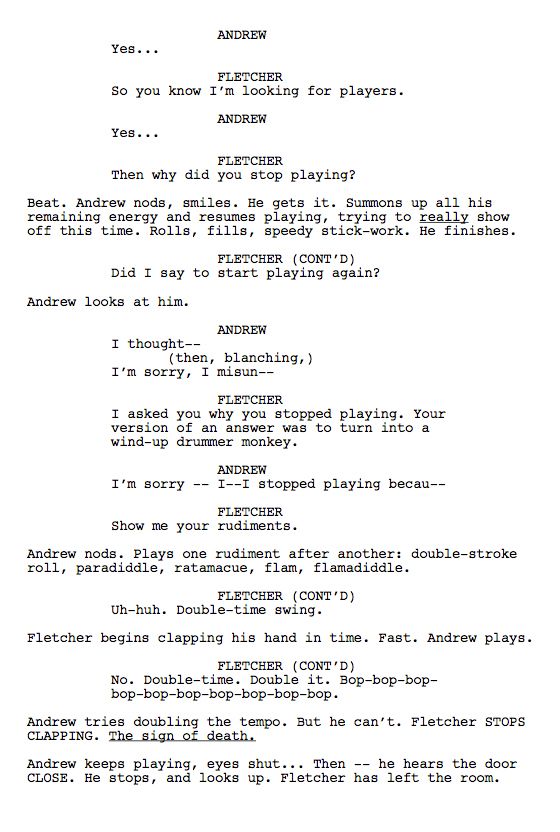 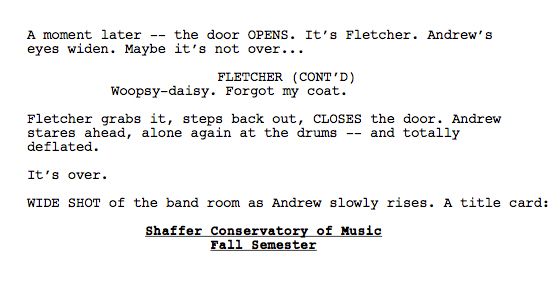