Over the next few weeks, Vulture will speak to the screenwriters behind 2014’s most acclaimed movies about the scenes they found most difficult to crack. Which pivotal sequences underwent the biggest transformations on their way from script to screen? Today Graham Moore discusses the final scene of The Imitation Game (excerpted below), where code-breaking genius Alan Turing (Benedict Cumberbatch) reveals to his old colleague Joan (Keira Knightley) just how extensively the British government has persecuted him for being gay. Moore also explains why the film controversially omitted Turing’s eventual suicide via cyanide-laced apple, an act only discussed in a closing-credits title card.

The scene that I must have done 30 drafts of was the final scene between Alan and Joan, when she comes to visit him. On the page, it’s a massive dramatic moment where Joan and Alan haven’t seen each other in years and have so much that they want to say to each other. Alan is going through this hormonal therapy to chemically castrate him, and I love the idea that we learn about that through her eyes. We are horrified with Joan as we learn what’s happening to him.

One thing we talked about a lot was the level of anger in the scene. In my first version, Alan was much angrier about the persecution he was facing and was quite bitter to Joan. Along the way we came up with a version where Alan was simply more sad and resigned about what was happening to him. He wasn’t fighting it because there was nothing he could do, and he just wanted to be left alone with his machine. There’s a lovely moment where Benedict reaches out and touches the machine, and you realize how much he’s able to communicate as an actor with just that touch. This is my first film, and moments like those were a constant learning process for me, because my instinct was always to put it all on the page and give people dialogue to express everything. When we went through rehearsal, I realized what all these actors could do with simply a look, so we pulled out a lot of dialogue and let the actors just be there in the moment.

We always knew that we didn’t want to show Alan Turing in the act of suicide — it was our feeling that would tip over into melodrama too quickly and seem over-the-top. We did script and shoot a very short scene that was supposed to take place after the scene with Alan and Joan, where Detective Nock comes back to the house after the body has been found. He goes up the stairs and you see Alan Turing’s body, blurry in the foreground, as he lies dead on the bed, and there’s an apple with a bite taken out of it on the nightstand. As a writer, I was obsessed with the idea that this should be the last scene, but when we first saw it in the assembly cut, it fell really flat. It just felt like the movie was reciting biographic information at you, and our guiding principle for the movie is that if you were learning information, it had to come from a character place. We’d had this idea that we would end on the shot of the apple with the bite taken out of it, but when we saw it that way, we all laughed. The movie suddenly looked like an Apple commercial! It was instantly goofy, so we cut it, and what we found is that Joan’s last monologue from the previous scene felt like a much more lovely way to end things that was very much in the spirit of the film. The Imitation Game is a celebration of Alan Turing’s life and legacy, and Joan’s final monologue is our eulogy. It’s the thing we all wished we could have said to him. 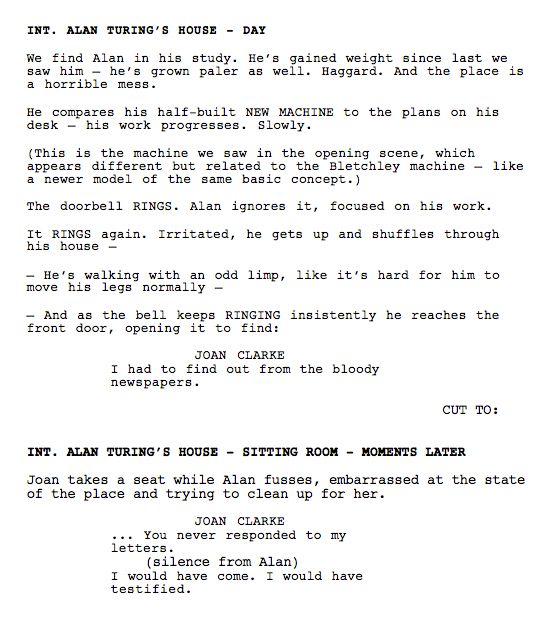 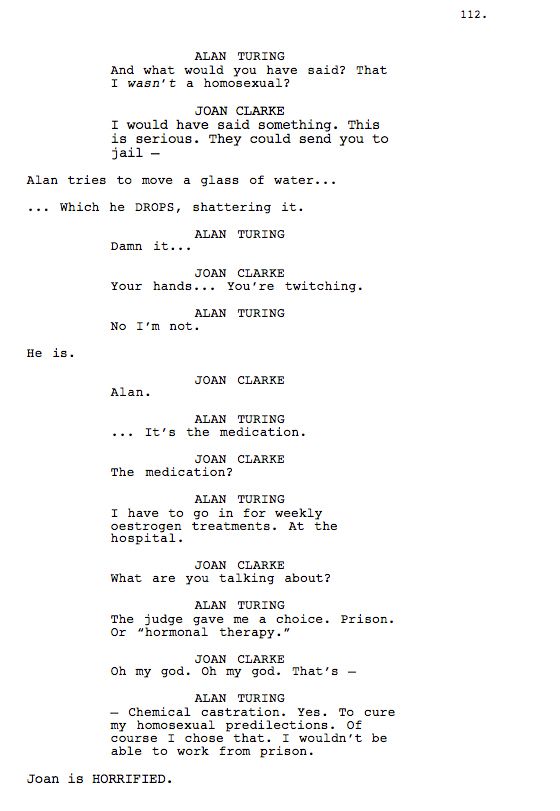 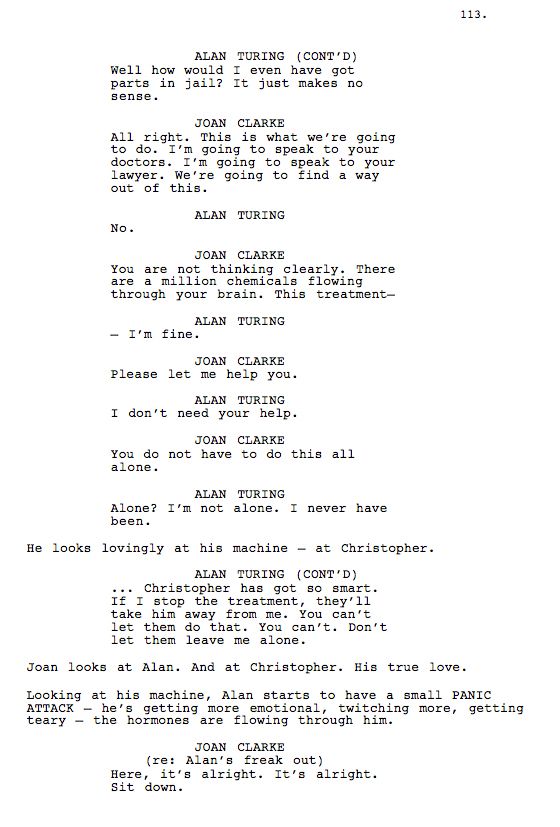 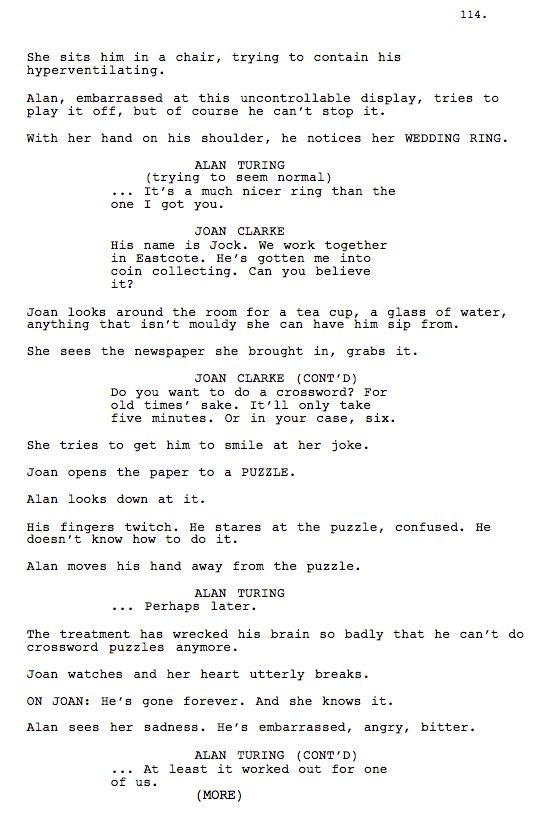 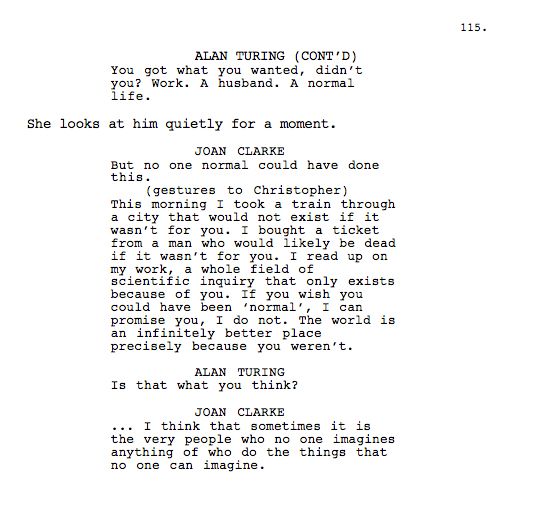 best of 2022 25 mins ago
The Best Podcasts of 2022 (So Far) The podcast universe is vast and strange. We’ve found the shows — both big and small, expected and unexpected — worth listening to.
"try everything" — shakira 8:50 a.m.
Bye, Guy In their first video as an official trio, the Try Guys say they were just as shocked by Ned Fulmer’s behavior as you were.
overnights 8:49 a.m.
90 Day: The Single Life Recap: Debbie Puts It All Out There Please, anyone who needs dating advice: Do not attempt anything Debbie does in this episode.
overnights 8:41 a.m.
The Patient Recap: In Treatment With Alan going through his own stuff, he doesn’t really have much left to give his patient. And Sam is pissed.
sleeper hit 8:00 a.m.
No One in Hollywood Wanted to Make Barbarian The horror hit’s journey to No. 1 packed in the twists: “I had a movie, I lost the movie, I rescued the movie, then I lost the movie again.”
By Chris Lee
ummm 1:30 a.m.
The Great British Bake Off’s Prue Leith Once Did What As a Child? According to her memoir, her mother once made her drown a bag of kittens.
grave of the fireflies Yesterday at 11:09 p.m.
Netflix Gives Firefly Lane a Big Good-bye The show will end with a supersized second season that drops in two parts.
overnights Yesterday at 10:01 p.m.
Kevin Can F**k Himself Recap: I’m Not Following You Allison needs to decide if she can leave Worcester — and Patty — behind.
theater review Yesterday at 9:00 p.m.
Economics Makes Strange Bedfellows in Cost of Living At Manhattan Theatre Club, two couples navigate their financial straits.
overnights Yesterday at 9:00 p.m.
Below Deck Mediterranean Recap: Jason Heads to Shore It’s too bad we didn’t get to see this side of Jason until he’s on his way out.
theater Yesterday at 8:16 p.m.
Andrew Lloyd Webber’s Next Broadway Musical Is Bad Cinderella Hopefully, this time he won’t call it a “costly mistake.”
overnights Yesterday at 6:11 p.m.
Ramy Recap: Ramy Is the Devil The Quran is the original blockchain.
overnights Yesterday at 5:55 p.m.
Ramy Recap: A Poop Transplant for Ahmed Does Amhed need a second wife, or does he just need a poo-poo switcheroo?
fire and blood Yesterday at 5:51 p.m.
Who’s Who in Westeros: A House of the Dragon Character Guide Keeping up with the Targaryens after episode seven.
overnights Yesterday at 5:41 p.m.
Ramy Recap: The Real Housewife of New Jersey Dena’s seeing a therapist, which is great … in theory.
stand-up Yesterday at 5:16 p.m.
Go for a Loop With One of Australia’s Best Comedians In his new special, Aaron Chen realizes Norm Macdonald’s vision of the “perfect joke.”
best of 2022 Yesterday at 5:00 p.m.
The Best Horror Novels of 2022 (So Far) In the mood for some transgressive splatterpunk?
review Yesterday at 4:55 p.m.
Kid Cudi’s Entergalactic Is Pretty, Affecting, and a Little Too Smooth The new album and Netflix project hit their marks but will make you pine for something stranger.
on the record Yesterday at 4:53 p.m.
A Timeline of Black Panther: Wakanda Forever Taking Forever A new Black Panther emerges to challenge Namor, king of Atlantis, in the trailer.
power Yesterday at 4:52 p.m.
Everything to Know About the WNBA Star in Russian Custody As negotiations for Brittney Griner’s release continue, a Russian court has set a date for her appeal.
More Stories