Chris Soules is a farmer. He’s also the Bachelor on The Bachelor this season — having lost The Bachelorette last season to become America’s favorite corn-fed, Iowa-bred, still-unwed dude. Imagine this: Where he’s from, there are no ladies! At least, not according to his ABC-written biography — where his reasoning for starring in this season’s Bachelor is because being plopped in the middle of 25 women is the only way he has a chance to meet any women in at all. Maybe he should just move?

Enough about Chris. As they introduce his potential mates — one of whom our dude hopes to woo and eventually marry — it’s hard not to see each one’s biography (News Producer! Fertility Nurse! Dental Assistant! Organ-Tissue Salesperson!) and think to yourself, Why the hell would they move to Iowa? But The Bachelor is not ready to address that elephant in the room just yet; these girls have some producer-crafted, overly awkward introductions to do! Reegan, the Donated Tissue Specialist, brought Chris “a heart”: And thus began the traditional cattle-call (He’s a farmer!) of women, each sharing a little of her schtick and making everyone at home cringe (no doubt partially due to the beep-boop-boop of the stock “Awkward Music” that ABC purchased and played throughout the show). Tara, a “Sports Fishing Enthusiast,” shows up in casual cutoffs and cowboy boots! That’s just her, she says, and it’s a totally cute gimmick until the other ladies — dressed in their finest prom attire — mock her into changing. She then puts herself back into the limo and reintroduces herself to Bachelor Chris … but now in a dress. After he recognizes her from seven minutes ago, he’s like, “You’re back!” And she’s like, “Yeah! But now I’m in a socially acceptable outfit!” We did it, America.

But after the first round of introductions, this season of The Bachelor has a brand-new, extra-cruel trick up its sleeve. They only bring in half of the women, letting them interact with Chris for “three hours” or so, before bringing in the rest of the contestants. At first, this might sound like a good thing! More time to spend with their man! But no: It’s totally evil. First, they spend the entire time wondering where the other women are. “I’ve spent half my life watching this show. I know the rules,” says one. The missing women are a bigger topic of conversation than our star, the Farmer. The women are already sweating and drinking and gossiping as the clock ticks into the night. When the next limos arrive, they all watch from afar, and — in a fun twist for the at-home viewers — we get their added commentary on the new batch of women.

As these new girls arrive, the other women become amazingly territorial. We’ve been here for three hours, they say to each other. These new girls aren’t getting ahead of us. It’s an extremely rude yet genius move on behalf of The Bachelor producers not only to create early alliances and drama, but to allow the first half of the women to get significantly drunker than the other half. They’ll all be there for at least another three hours. And then likely for four more — you’ll notice that when Chris is finally finished handing out his roses, it’s light outside. They’ve been there all night. This might be what Hell is like.

Farmer Chris picks most of the girls you’d expect him to — the ones who managed not to go completely insane while forced to wear high heels and gowns under hot lights for seven-plus hours. He also goes for Sports Fishing Enthuisast Tara. Remember her? She was last seen changing outfits for her man. But that enthusiasm (It’s her job!) got ahold of her, and she drank herself wobbly. Barely able to keep her head up at judging, she looks like she could barf at any moment.

Maybe Chris is more fun than his canned nice-guy biography lead us to believe, because he gave her a rose! Not all the fun gals will last tillnext week, however. We lost our Donated Tissue Specialist, Reegan; the girl who wore the pig nose, Nicole; the girl who was training to be a WWE Diva, Brittany; the plus-size model who spoke maybe three words total on-camera, Bo. We even lost doe-eyed, Ballet Teacher Amanda. We’ll never forget her expert eye contact: 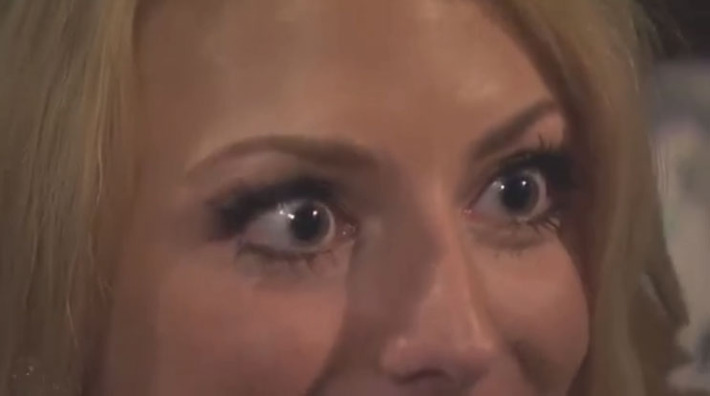 That mocking zoom-in is courtesy of ABC. No doubt they’re going to make this one a good season.

See you next week!

lesser known actors 1:54 a.m.
Because Everyone Asked, Here Are Chance The Rapper’s Favorite Character Actors It’s a refreshingly eclectic list that includes Michael K. Williams, Michael Shannon, and many more.
coronavirus 12:15 a.m.
All the Celebrities Who Have Tested Positive for the Coronavirus Idris Elba, Kristofer Hivju, and more.
deaths 12:02 a.m.
Jazz Pianist and Musical Family Patriarch Ellis Marsalis Jr. Dead at 85 He had been hospitalized and tested for coronavirus.
my album is dropping Yesterday at 10:55 p.m.
Fiona Apple And Her Dog Announce Fetch The Bolt Cutters Will Arrive This Month Fetch The Bolt Cutters arrives on April 17th.
overnights Yesterday at 10:00 p.m.
Summer House Recap: All Greek to Me Kyle’s birthday toga party really shows what a production budget can do for a little backyard shindig.
coronavirus Yesterday at 8:19 p.m.
Benjamin Netanyahu Reportedly Mistook Hallmark Show For Iran Pandemic Footage The Israeli Prime Minister’s office doesn’t deny playing footage of Pandemic in a cabinet meeting.
deaths Yesterday at 6:55 p.m.
Adam Schlesinger, Crazy Ex-Girlfriend Songwriter, Dead at 52 From Coronavirus He had been hospitalized and on a ventilator for multiple days.
vulture recommends Yesterday at 6:34 p.m.
Meghan Markle Makes Glorious Return to Acting by Narrating Elephant Farts “Oh, dear. Ah, who did that?”
so many questions Yesterday at 6:09 p.m.
Florida Sheriff Is Here to Debunk Your Tiger King Cold-Case Theories Fans of the Netflix series are sending in tips about Carole Baskin’s ex-husband every day. Here’s what’s new with Don Lewis’s missing-person case.
By Maria Elena Fernandez
tiger king Yesterday at 5:44 p.m.
Joe Exotic Is in Coronavirus Isolation in Jail, Says Husband Dillon Passage Exotic is what Passage calls a “power vers.”
my single is dropping Yesterday at 5:38 p.m.
Troye Sivan Drops New Single ‘Take Yourself Home’ Early, Against Label’s Plans At least someone is still putting out new music.
they never ask haw yee Yesterday at 4:34 p.m.
Orville Peck Remembers What It’s Like to Go Outside in His ‘Summertime’ Video Now we just need Peck to teach us how to make those fringed leather face masks.
for good? Yesterday at 2:24 p.m.
Like a Seed Dropped by a Skybird, the Wicked Movie Is Delayed Yet Again Universal has replaced Elphaba with Sing 2.
coronavirus Yesterday at 1:30 p.m.
Here Are All the Movies Delayed Because of Coronavirus With updated release dates where available.
this thing's incredible Yesterday at 1:20 p.m.
Comforting and Addictive, This Sega Genesis Mini Is Now My Go-to Stress Reliever It’s easy entertainment that keeps my mind from worrying about the outside world — and how much longer it’ll be before we can return to it.
dance dance revolution Yesterday at 1:11 p.m.
Crying and Twerking Through the Apocalypse With The OA’s Ryan Heffington Heffington is starting a revolution from his living room: cathartic Instagram dance classes, attended by upward of 6,000 strangers.
coronavirus Yesterday at 12:30 p.m.
Email Coroniquette: What ‘I Hope You’re Doing Well’ Really Means Now please answer my email.
outlander Yesterday at 12:07 p.m.
This Month Has Changed My Mind About Outlander The world is different now, and suddenly, I can appreciate Claire Fraser as the public-health hero she is.
coronavirus Yesterday at 11:45 a.m.
All the Live Events, Movie Releases, and Productions Affected by the Coronavirus A long list of broken dreams.
six seasons and a netflix Yesterday at 11:30 a.m.
Dean Dong! Community Is Now on Netflix Six seasons and a move to Netflix.
More Stories