American cartoon legend Robert Crumb has done two drawings for the French newspaper Libération in response to the attack on the Charlie Hebdo offices. In an interview with the New York Observer, Crumb, who has been living in France for the past 25 years, said that Charlie Hebdo “didn’t let anybody off the hook, which was good.” He explained that the deaths inspired him to make some Muhammed-themed cartoons of his own, which he says are the most he’s “stuck [his] neck out for a long time.” Why?

A lot of French people said, “Yes, it was tasteless, but I defend their right to freedom of speech.” Yeah, it was tasteless, that’s what they say. And perhaps it was. I’m not going to make a career out of baiting some fucking religious fanatics, you know, by insulting their prophet. I wouldn’t do that. That seems crazy. But then, after they got killed, I just had to draw that cartoon, you know, showing the Prophet.  The cartoon I drew shows me, myself, holding up a cartoon that I’ve just drawn. A crude drawing of an ass that’s labeled “The Hairy Ass of Muhammed.”  [Laughs.]

That, seen below, was published with the dedication, “Showin’ solidarity with my martyred comrades.” 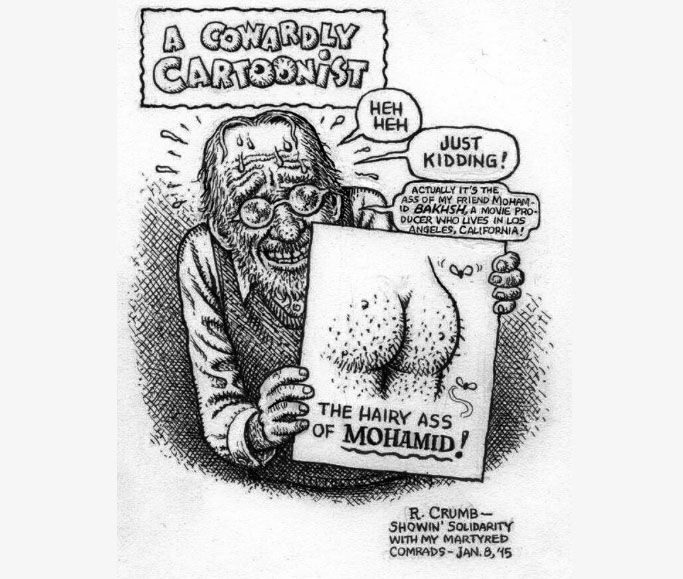