Vulture is speaking to the screenwriters behind 2014’s most acclaimed movies about the scenes they found most difficult to crack. Which pivotal sequences underwent the biggest transformations on their way from script to screen? Today writers Scott Neustadter and Michael H. Weber discuss the sequence in their adaptation of John Green’s The Fault in Our Stars where Hazel (Shailene Woodley) and Gus (Ansel Egort) go out to dinner. The scene is then excerpted below.

To cut a long story very short, Scott’s father died of pancreatic cancer the week The Fault in Our Stars was published. We read it a few weeks later, not long enough to have entirely processed our feelings on its subject matter but long enough to know that we had to adapt it.

The book was heartfelt and funny, sad and beautiful, its dialogue simple and profound, its characters completely fleshed out on the page. It was an easy adaptation, as these things go, and in fact, we wrote it in less than a week, our primary objective to create the illusion of absolute faithfulness. You could say that no scene was difficult but, considering where our heads were at that time, the truth is they all were.

Case in point, this scene below. Some of it drawn from John’s words, the rest from our own emotional unrest.

It’s a scene where Hazel (who knows she’s dying) and Gus (who knows he’s dying but hasn’t told Hazel yet) have traveled to Amsterdam for what they’re sure will be the trip of a lifetime. That first night in town, they’re treated to a five-star dinner in one of the city’s swankiest restaurants. Despite the romantic setting, finality is on their minds, as it so often is, and so their thoughts turn to the afterlife — what happens after you die? Is there more to the story? Will any of this suffering and sadness make sense?

Big questions, big themes; not exactly your typical teenage dinner conversation. But these are not your typical teenagers. Though they live their lives refusing to let their disease define them, Hazel and Gus are also acutely aware of their need to accelerate a lifetime of experience into what little time is left. Something the rest of us never do.

If there was one idea that characterized the entire adaptation, that was it. 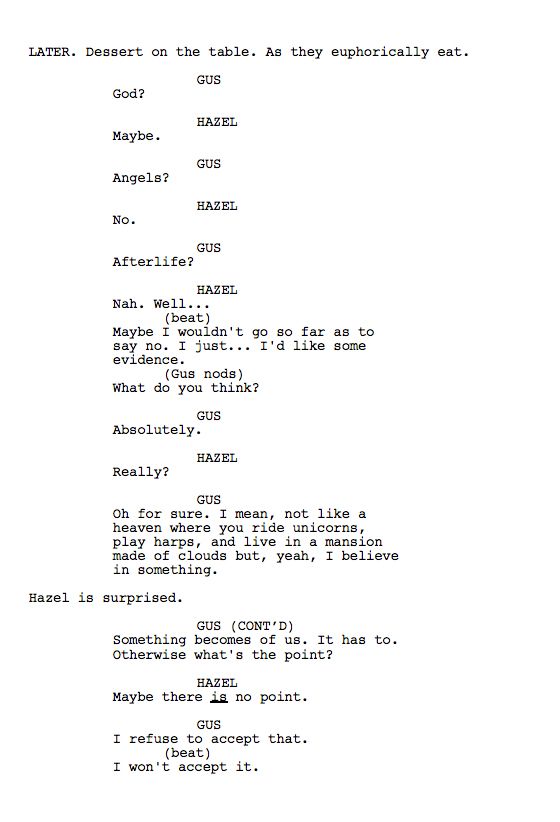 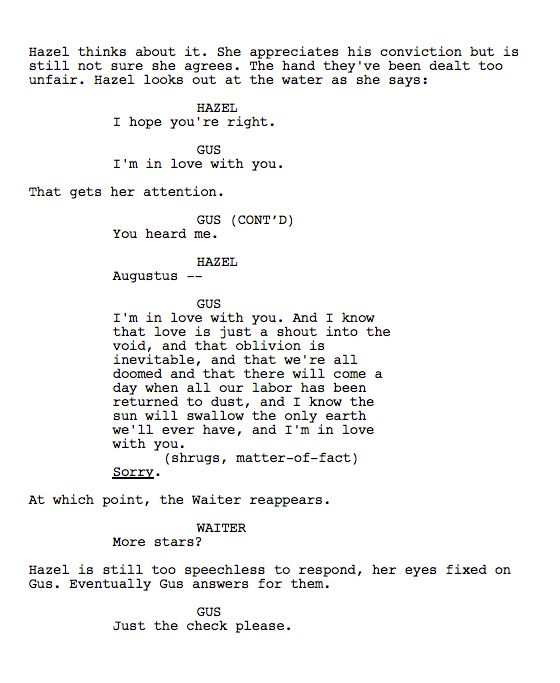 +Comments Leave a Comment
The Toughest Scene I Wrote: Fault in Our Stars

theater review 25 mins ago
A Speed Date With Long Day’s Journey Into Night Cut from three and a half hours to two, and TB traded for COVID.
overnights 10:01 p.m.
This Is Us Recap: Jack’s Mom In what may be the last stand-alone Jack episode, Milo Ventimiglia has never been better.
lightning strikes 9:52 p.m.
Percy Jackson’s Author Blesses Disney+ Adaption: ‘We’re in Great Hands’ Percy Jackson and the Olympians has been picked up to series.
lawrence hive 7:35 p.m.
Who Slapped Jay Ellis in an Airport? Drop your location, we just wanna talk.
drew's news 6:17 p.m.
Drew Barrymore Refuses to Kink-Shame Megan Fox and MGK Barrymore likes that he got Fox an engagement ring with thorns that hurt if she takes it off.
remakes 5:00 p.m.
Disney’s Live-Action Snow White ‘Makes No Sense’ to Peter Dinklage “You’re progressive in one way, but you’re still making that fucking backwards story of seven dwarfs living in a cave together.”
switched on pop 4:20 p.m.
Elvis Costello’s Aim Remains True, 32 Albums In  Plus, riffs on everything from Olivia Rodrigo’s songs being “how rock and roll works” to passing on a chance to write for Adele.
comedy review 4:16 p.m.
Aziz Ansari’s Empty Authenticity If at any point his material reached for the same goals as the look of the special, Nightclub Comedian might be a different experience.
the videodome 3:35 p.m.
Are You ‘Curious’ About Franz Ferdinand’s New Track? They even do an avant-garde hoedown.
food glorious food 3:17 p.m.
How The Gilded Age Prepares Its Sumptuous Feasts Yes, those are all real lobsters.
overnights 3:10 p.m.
The Bachelor Recap: Let Clayton Himbo Not even Shrimpgate can slow down Shanae.
academia 2:29 p.m.
4 Hours, 12 Panelists, One Baby: Inside the Inaugural Boss Baby Symposium The virtual event went surprisingly deep on the film it called “thematically richer than the Bible and more confusing than Ulysses.”
By Chloe Lizotte
this! is! a fun quiz! 2:15 p.m.
Can You Answer the Jeopardy! Clues Amy Schneider Couldn’t? Probably not! Well, maybe. Why don’t you try and see?
By Devon Ivie
hype house 2:12 p.m.
The Hype House Allegations That Didn’t Make It Onto Netflix The story is, of course, unfolding across social media.
racism 1:41 p.m.
Bravo Fires Jennie Nguyen from The Real Housewives of Salt Lake City “We recognize we failed to take appropriate action once her offensive social media posts were brought to our attention.”
last night on late night 12:18 p.m.
Lady Gaga ‘Never Met’ Jared Leto While Filming House of Gucci “I was always with Paolo; he was always with Patrizia.”
role call 12:00 p.m.
Julie Delpy Answers Every Question We Have About 2 Days in Paris On tricking studio executives into making movies, dodging the word “crazy” throughout her career, and why she thinks she might be Larry David.
By Rachel Handler
vulture 10x10 12:00 p.m.
The EGOT Puzzle 12-Across: The Peter ___ (because “Spidey sense” is so 2002).
last night on late night 11:43 a.m.
Paris Hilton and Jimmy Fallon Go Ape for Print Outs of NFTs A physical copy of a jpeg that Hilton owns (a link to).
look out! 11:00 a.m.
Sam Raimi’s Spider-Man Movies to Swing Onto Crackle For Free He’ll arrive just in time for February.
More Stories