Mortdecai, who do you think you are? Seriously, I’m asking because I have no idea. Every day I walk by a poster for the film. Every day I’m newly baffled by how presumptuous it is. It’s just a giant photo of a bright-eyed Johnny Depp wearing some fancy clothes and a twirled mustache, along with the following text:

That’s it. If you read it out loud, you sound like a cult member proclaiming the imminent return of an ancient deity in the body of his human prophet: “Johnny Depp is Mortdecai! Mortdecai! January 23!” Oh, and there’s tiny print directing us to MortdecaiTheMovie.com and the maddeningly vague hashtag #PartTimeRogue, but that small print raises more questions than it answers, really. The people behind the movie didn’t even frame the poster as a mysterious teaser, bearing a question like “Who is Mortdecai?” Nor is it framed as an introduction, with text like “Meet Mortdecai” or whatever. Do you have any more information, poster? I wonder. But no, of course it doesn’t. 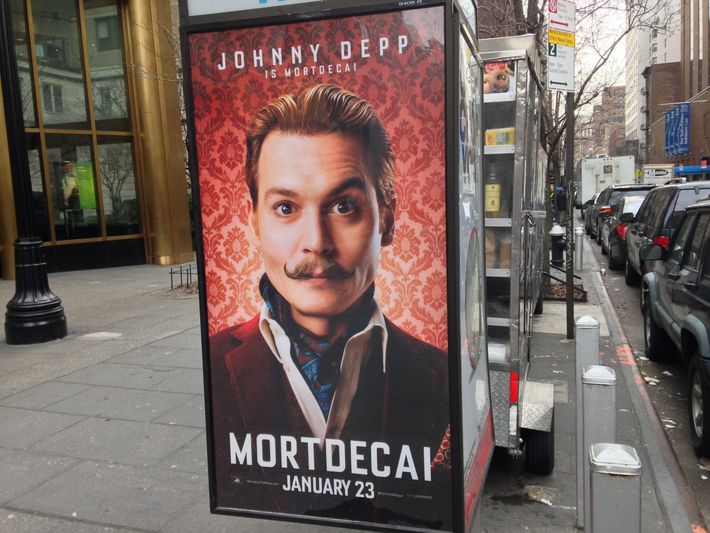 To offer substantive information about Mortdecai or its cinematic contents would go against what seems to be the foundational credo of the ad campaign: Hey, America — it’s your old friend, Mortdecai! Need we say more? But Mortdecai is no friend of mine. They’re acting like Mortdecai is some kind of major franchise that we’re already supposed to be jazzed about. Maybe I’m living in a bubble, but I have never met a single person who has any prior knowledge of — let alone name-brand recognition of — Mortdecai. And yet, here they are, acting like we’re all already onboard with Mortdecai. It’s like they’re trying to make us feel guilty for not knowing who Mortdecai is. And they never tell us why there’s that extra t in his name. I’ve never felt this blend of confusion and anger about a publicity push. I know I’m not alone.

If we take initiative and work hard to seek additional information, we can learn more about Mortdecai, but the purpose of an ad campaign is to give people information without forcing them to take initiative. We only have so much initiative we can take on any given day, so why should we waste it on forcing ourselves to get interested in a movie that’s been so ineptly pitched to us? I mean, look at the posters. There’s one above a subway stop in lower Manhattan that’s just photos of the various stars with mustaches on. They’re Mortdecai-esque mustaches, I guess? But since none of us are familiar with this mustache, why should we get excited about the poster? Does the promotional team honestly think we’re going to laugh simply at the sight of Gwyneth Paltrow with facial hair? 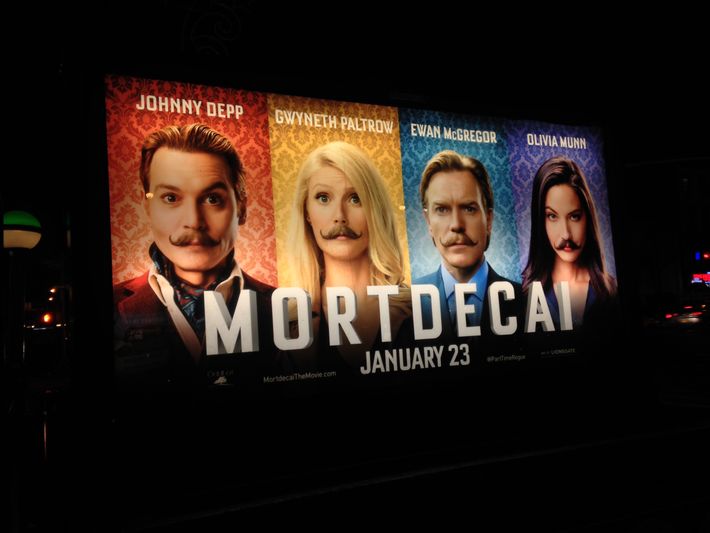 Speaking of Gwyneth Paltrow: Even she seems confused about the movie. She was on The Tonight Show as part of the Mortdecai press tour and, when asked to explain the basic setup of the movie, she gave this vague description:

In this one, [Johnny Depp] plays this super-British aristocrat who’s grown — his wife, who’s played by me, goes away to visit a friend, and comes back, and he’s grown this giant mustache. And they sort of — at the center of the movie is this kind of fight about this mustache, but really, it’s like, also an art-heist adventure, kind of romance. It’s really fun!

Sure, some of the posters have a little bit of exposition. Some of them are individual pictures of the stars with the mustache, with tidbits of info about the characters they play — but it’s always in relation to Mortdecai. “OLIVIA MUNN IS SEDUCING MORTDECAI,” “GWYNETH PALTROW IS MARRIED TO MORTDECAI,” and so on. There’s one where Depp is reclining on a chaise-lounge while Paltrow stands above him, and it has a tagline: “SOPHISTICATION HAS A NAME. MORTDECAI.” Does the ad team think we’re all going to clamor to find out more about this rando because he’s “sophisticated”? Do they think we’re all wandering the streets, desperate to learn more about movie characters who are sophisticated?

I’ve done some Googling, and it appears that Mortdecai is a character from some novels that a British man wrote in the 1970s. The Wikipedia entry about the novels is very brief. Its introduction concludes with a sentence saying the novels “have often been favourably compared to that of P.G. Wodehouse, Mortdecai and his manservant Jock Strapp being described” — and then, in pithy, bracketed Wikipedia superscript, “[by whom?]” — “as bearing a fun-house mirror relation to Wodehouse’s Wooster and Jeeves.” According to the latest Goop newsletter, Paul Bettany is playing Jock Strapp. He’s not in any of the posters I’ve seen. Honestly, I’d be far more intrigued by a movie called Jock Strapp than Mortdecai. 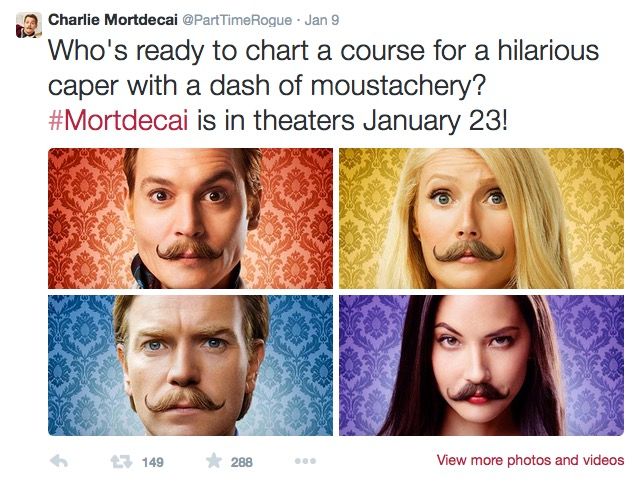 The Wikipedia entry doesn’t get any better from there. Whichever fan made that unverified claim about Wodehouse seemingly couldn’t be bothered to write more than one sentence about each book in the series. “Mortdecai is pursued by police, charged with the theft of a priceless Goya painting” is all we learn about the first novel, which is called Don’t Point That Thing at Me. Mortdecai doesn’t even show up in the titles of these books. Their author, the late Kyril Bonfiglioli, had the right idea: He didn’t call the first book Mortdecai.

Yes, there’s a trailer, and it does offer some basic plot elements: Mortdecai is a wealthy British man who gets paid to find a lost painting. But beyond that, it just tosses random story elements at us. Mortdecai doesn’t know how things work in America? His wife is, apparently, very domineering and thinks he smells bad? Ewan McGregor works for the government or something? Olivia Munn’s character is a nymphomaniac? We’re certainly not drawn in by the gags, which include Mortdecai groping someone, Mortdecai seeing someone’s boobs, and Mortdecai comparing women in bikinis to porn stars. At its core, the trailer still assumes we inherently wanted to come along on Mortdecai’s adventures well before we actually ever learned he existed.

But you know what, I might forgive all of this if it weren’t for the tweets. Those goddamn promoted tweets. I swear to God. Every stupid day, there they are in my feed, all coming from the movie’s verified account, @PartTimeRogue. (There’s that phrase again. Who cares that the character is a rogue? Is his part-time status supposed to make the “rogue” label exciting?) They’re written in the “voice” of this Mortdecai fellow. Charlie is his first name, according to the Twitter account. He speaks in a half-assedly foppish manner, using words like sweethearts and chap. And hoo boy, he makes tedious jokes: 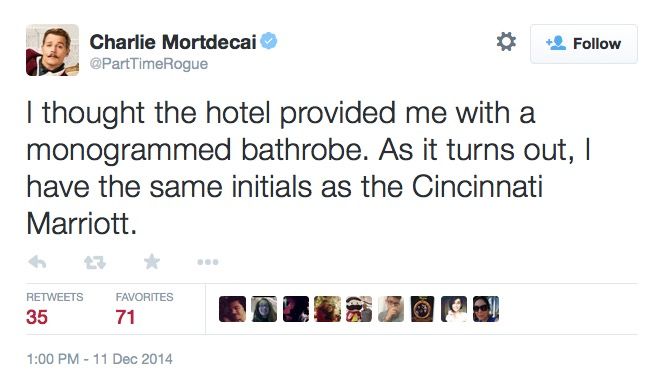 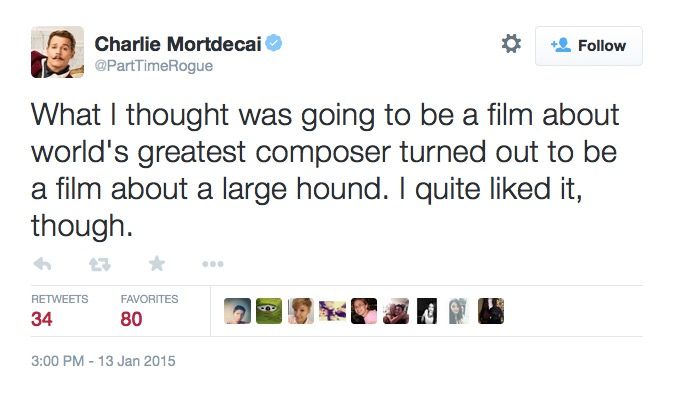 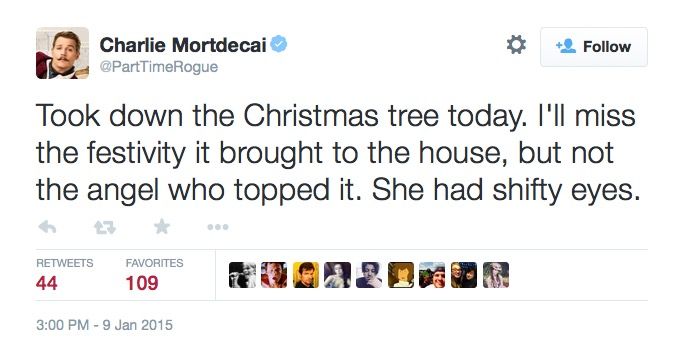 (Why hasn’t Mortdecai seen Beethoven? Is he a recluse or something? And why would he be afraid of a Christmas-tree ornament? Does he suffer from hallucinations? Is that his “thing”? Or is his “thing” that he is given objects he doesn’t need? And if he goes on so many globe-spanning capers every year, wouldn’t he be a full-time rogue?)

And then there is the the one tweet that actually drew attenion: the poorly Photoshopped image of Mortdecai grabbing Olivia Munn’s boob, accompanied by text that read, “Do you remember this day, @oliviamunn? I know my right hand does! #Mortdecai in theaters January 23!” That one got a deserved amount of hate, which is the only buzz the movie has received so far.

The weird misogyny of that tweet is not the greatest social-media crime. Mortdecai is guilty of thirst in the first degree, constantly piggybacking on whatever happens to be trending in the English-speaking world. Nearly every other tweet is an embarrassing cash-in on someone else’s brand or some random trending topic: 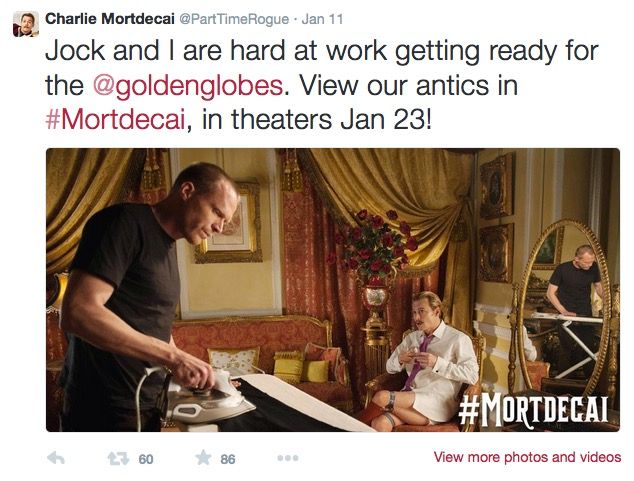 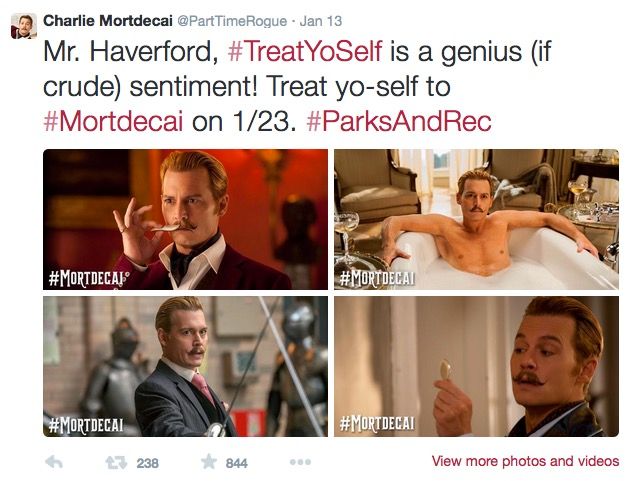 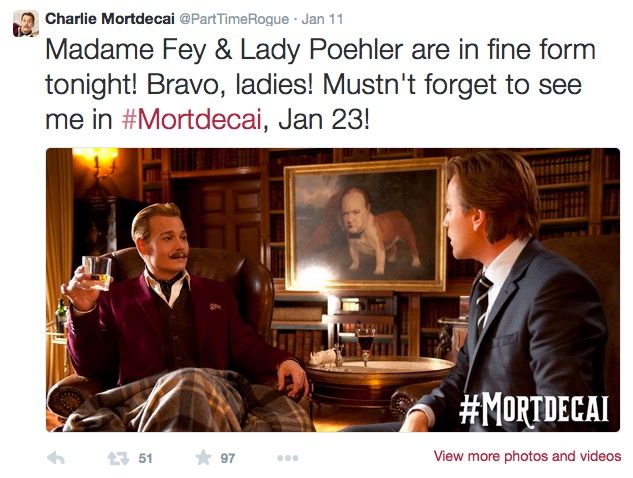 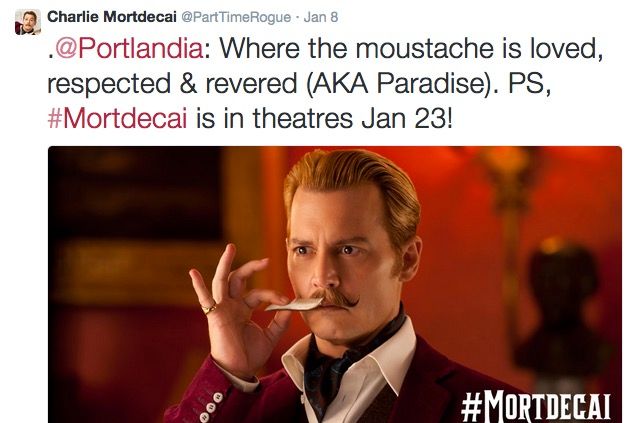 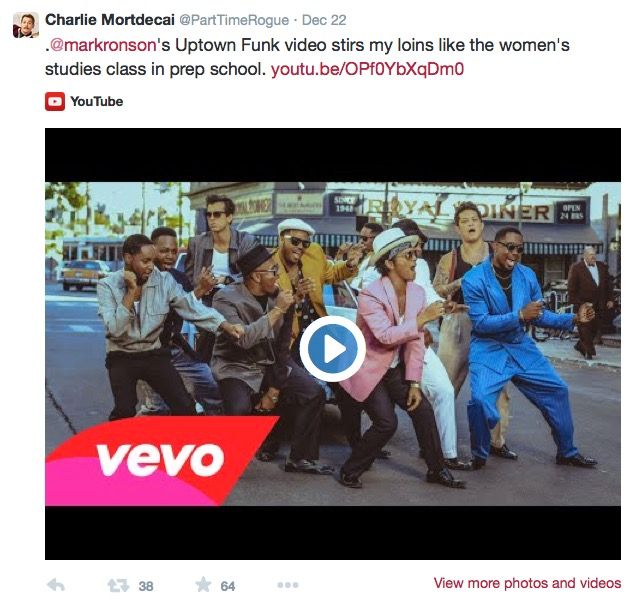 (There were a bunch of tweets about Downton Abbey, too, but they appear to have been taken down. They were about how he really liked the show or something. Were the tweets deemed offensive? Did the show’s legal team tell them to back off? Is Mortdecai even British, or does he just talk weird? And why? Why anything? Why?)

On a certain level, I find the advertising scheme truly fascinating. No movie in my lifetime has presented itself as such a blank slate, so void of meaning. I’m halfway tempted to think it’s a parody of Hollywood’s current glut of franchises and sequels, all of which pitch themselves to us as being worthwhile simply because they’re familiar. But no movie campaign, however buried in a January dump it might be, would take that kind of risk for the sake of a metatextual joke. Not even Mortdecai is that much of a rogue. Or is he just the right amount of rogue? Does anyone know whether that’s the kind of thing Mortdecai would do? Anyone?