Most of this year’s Academy Award contenders assembled today at the annual Oscar nominees’ luncheon, and you know what that means: It’s time to dissect this year’s class photo! Which boldfaced names posed awkwardly next to behind-the-scenes oddballs? Who had weirder hair: your favorite actress or some dude up for Best Sound Editing? Which nominees of color dared to break up the visual monotony of 200 white guys dressed like bankers on their lunch break? Let’s zoom in on this official class photo and see what strikes us! (Sorry that it’s still so low-res! Blame the Academy for this outrageous snub of high-resolution photos.) 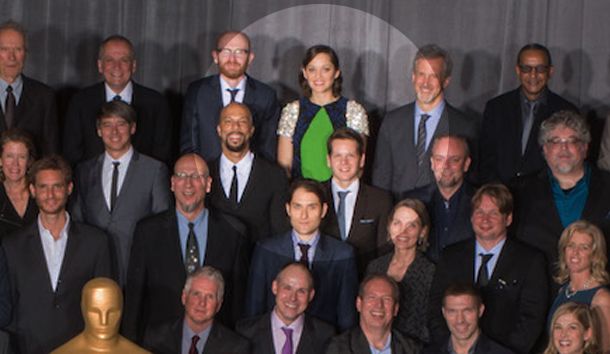 Don’t be alarmed by Marion Cotillard’s dress: After this class photo was taken, the special-effects nominees raced to fill in that last remaining dollop of green-screen. 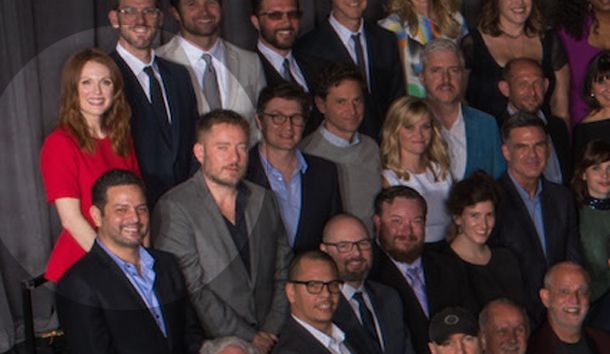 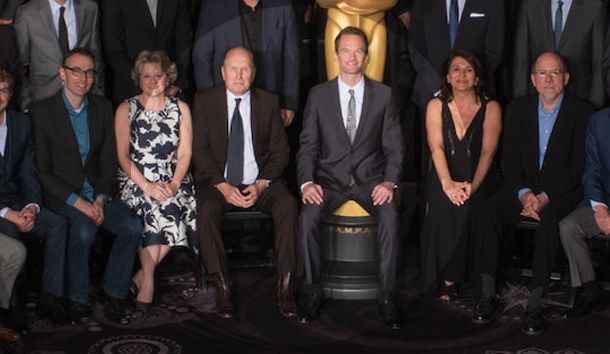 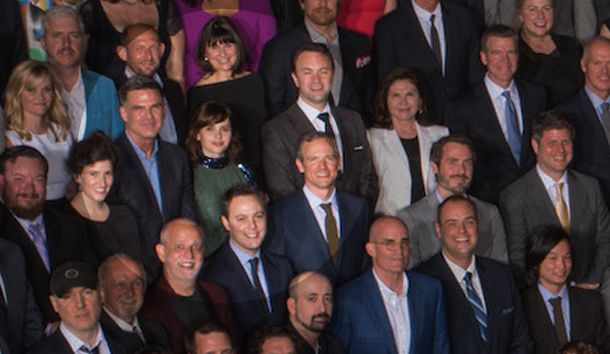 While it’s not as eye-catching as Marion Cotillard’s iridescent green vagina blouse, it still took some guts for Felicity Jones to wear this olive smock to her first day of kindergarten. 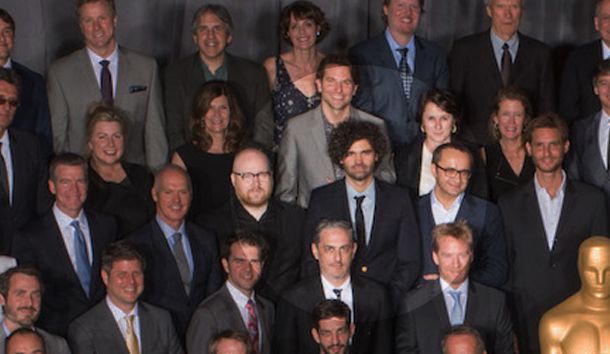 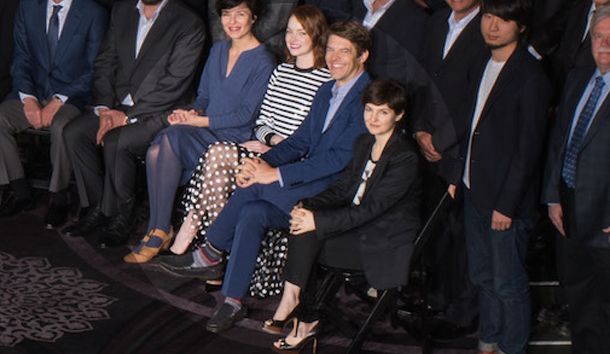 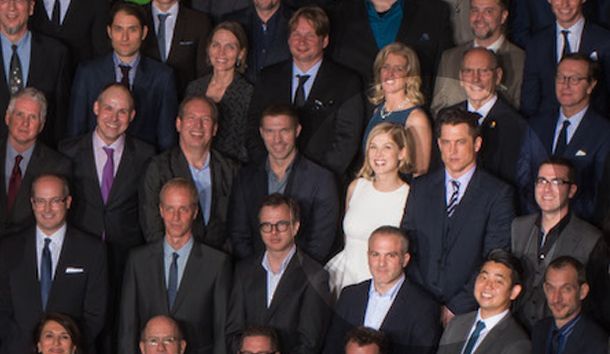 Most Eager to Act Out the Final Scene in Gone Girl: Rosamund Pike and grim-faced American Sniper writer Jason Hall. 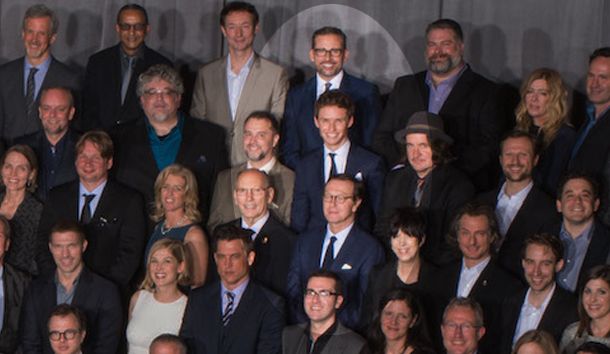 Least Likely to Get Separated at Six Flags: Steve Carell, Eddie Redmayne, and the similarly attired dude in front of them. 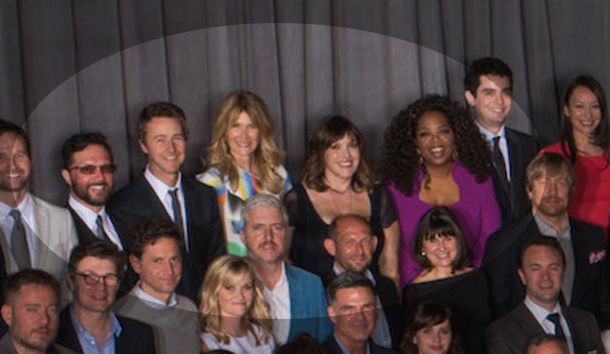 Most Likely to Excitedly Tell Edward Norton and Oprah That Her Dress Was Made By a 3-D Printer: I think you know who.

vulture recommends 1 min ago
‘Cocktails & Dreams’ is Happy Endings at Its Most Potent This a-mah-zing sitcom premiered ten years ago today.
not a kesha song 23 mins ago
Just How Bad Are the Lyrics to Mick Jagger and Dave Grohl’s ‘Eazy Sleazy’? Are they eazy to listen to, or do they just make us feel sleazy?
trailer mix 25 mins ago
The Hitman’s Wife’s Bodyguard’s Trailer’s Blog Post Can bodyguards take “sabbatical”?
viewing guide 1:22 p.m.
Which 90 Day Fiancé Spinoffs Are Worth the Subscription? Six new series, six new ways to ensure your 90 Day journey never has to end.
the hot duke 12:43 p.m.
Shonda Rhimes Was ‘Shocked’ Fans Revolted After Regé-Jean Page Left Bridgerton “So yeah, I was like, whoa!”
into the snyder-verse 12:11 p.m.
Zack Snyder’s Army of the Dead Trailer Has Zombie Lovers and a Zombie Tiger Also, Tig Notaro is an action star now.
kellyoke 11:24 a.m.
Kelly Clarkson Blazes Through a ‘Gaslighter’ Cover for Kellyoke We’re sure it’s just a coincidence the recently single host has chosen this song.
hot pod 11:20 a.m.
Welcome (Back) to Depresh Mode How one podcaster revived his show after losing his job (and his old podcast feed).
fandom 10:31 a.m.
Lady Gaga Loves How Much (Some of) You Still Love ARTPOP Fans got the 2013 album into the top three on iTunes after a petition asked for an “Act II.”
encounter 10:05 a.m.
Talking Papaya Salad and Scalloped Potatoes With Pepper Teigen A quick cooking lesson with Chrissy’s spice-loving mom.
By Juliet Izon
oscars 2021 10:00 a.m.
The One Scene That Best Represents Each 2021 Best Picture Nominee Here are our picks for the singular scenes that Oscar should use to represent each Best Picture nominee at this year’s Academy Awards.
switched on pop 9:46 a.m.
5 Rules of Great Songwriting Collabs, According to Teddy Geiger and Dan Wilson “I don’t want to just make another one of ‘those.’”
By Charlie Harding and Nate Sloan
shondaland 9:43 a.m.
Bridgerton Will Come Again Twice It’s been renewed for seasons three and four.
hardware 9:00 a.m.
The New Roku Remote Has a Fancy Apple TV Button The move underscores Roku’s importance in the streaming universe.
profile 8:00 a.m.
Esther Perel Goes Off Script She became today’s most famous couples therapist by ignoring all the rules of the trade.
american idol 1:59 a.m.
Paula Abdul Wishes ‘STD’ Simon Cowell Could Have Joined Her American Idol Return Abdul joked about missing her “super, talented, debonair” former co-star while filling in for current host Luke Bryan.
apologies 12:37 a.m.
Hank Azaria Wants to ‘Personally Apologize’ to Every Indian Person for Apu “It’s important. I apologize for my part in creating that and participating in that.”
movie theaters Yesterday at 10:02 p.m.
L.A.’s Beloved ArcLight Cinemas, Pacific Theatres Will Close Permanently “Despite a huge effort that exhausted all potential options, the company does not have a viable way forward.”
hulu Yesterday at 8:37 p.m.
Michael Cera Makes Life & Beth Decision to Join Amy Schumer’s New Hulu Show His first onscreen series-regular role since Arrested Development.
casting call Yesterday at 7:30 p.m.
Lucy Liu Joins Shazam! Sequel As Helen Mirren’s Villainous Sister The role she was born to play.
More Stories