A Redditor found a Waterstones tweet, which was eventually deleted, that included an old letter from George R.R. Martin to his agent, detailing his original plans for the “Song of Ice and Fire” saga. How old is it? So old that G.R.R.M. was still saying the series would be a trilogy. The pitch is a doozy: All the main conflicts in Westeros are present, but each story line is slightly different. Not worse, exactly, just more … conventional, and even soapy. [Major spoilers from here on out.] Robb dies in battle; Daenerys murders Khal Drogo; and, most bizarre, both Jon Snow and Tyrion fall in love with Arya. (As Martin writes, Jon and Arya’s “passion will continue to torment [them] throughout the trilogy, until the secret of Jon’s parentage is revealed in the final book.”) There’s also a pregnant Sansa, a North-of-the-Wall Catelyn, and a more villainous Jaime Lannister. Read the letter below, and marvel at how G.R.R.M.’s vision has evolved in the two decades since. 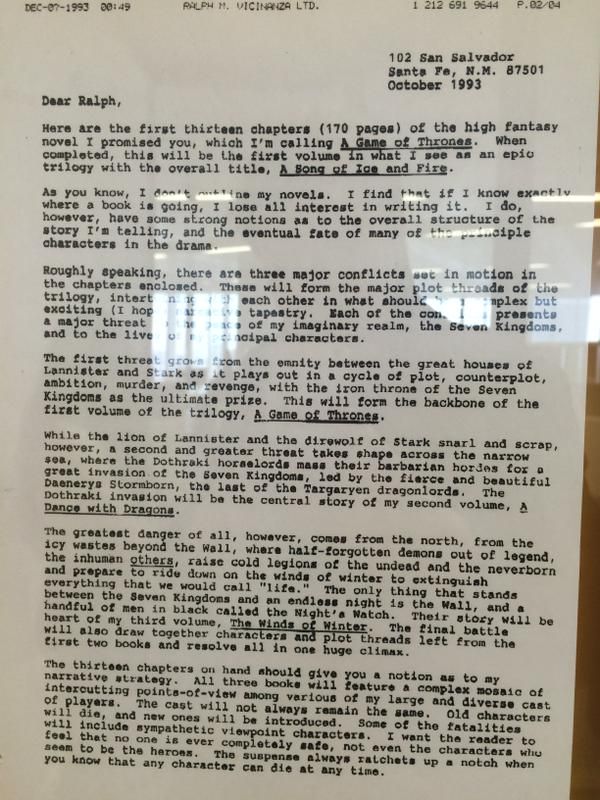 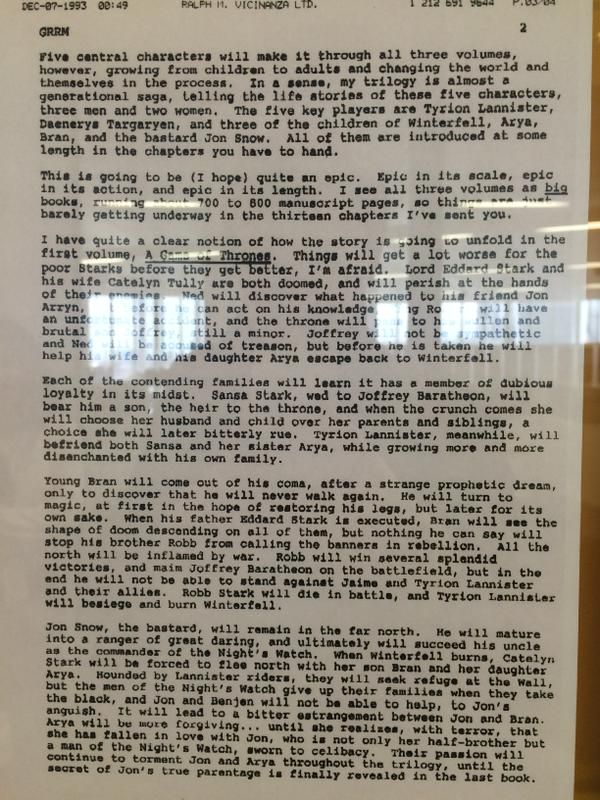 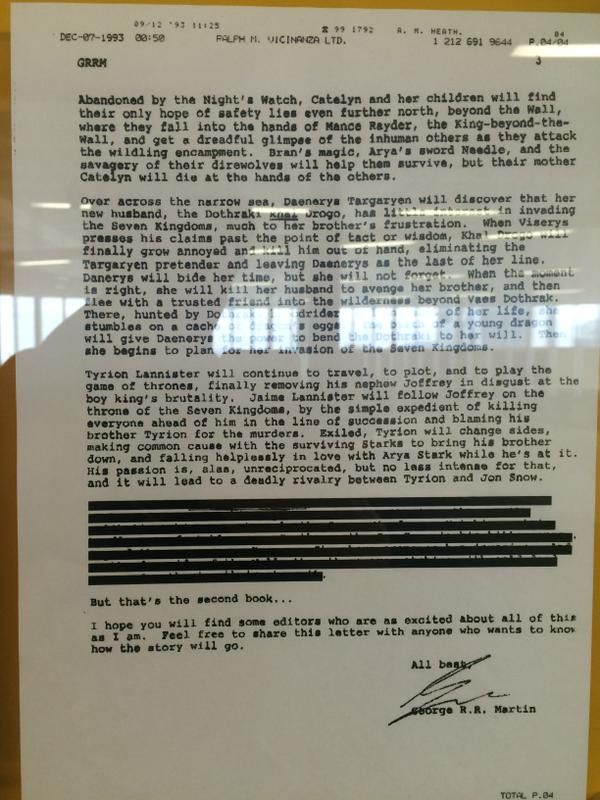 trailer mix 18 mins ago
Red and Kitty Forman Deal With More Teens in That ’90s Show Topher Grace, Laura Prepon, and most of the original cast will return.
trailer mix 1:09 p.m.
Julianne Moore Is a 21st-Century Woman in When You Finish Saving the World Jesse Eisenberg takes on an A24 mom movie, starring Finn Wolfhard as the disaffected son.
tbs needs content 12:45 p.m.
Adam Sandler, King of Awards-Show Acceptance Speeches, Is Back His teen daughters “wrote” him a hell of a speech for the Gotham Awards.
last night on late night 12:13 p.m.
James Austin Johnson Sings, Croons, Shouts Through a Bob Dylan History Lesson With some impeccable impressions of the songwriter’s eras.
chat room 11:39 a.m.
Andor’s Kathryn Hunter Saw Eedy Karn’s Comedic Potential Immediately “She’s probably a thwarted woman herself, and she’s overcompensating with her son.”
vulture lists 11:38 a.m.
The 10 Best Versions of ‘Have Yourself a Merry Little Christmas’ A song for the cynics, the sad girlies, and the lonely boys.
rip 11:29 a.m.
Clarence Gilyard, Walker, Texas Ranger and Die Hard Star, Dead at 66 Following a career in acting, he became a professor of theater and film.
today on daytime 11:01 a.m.
Some People Wait a Lifetime for a Moment Like Matt Rogers Meeting Kelly Clarkson “This is unfortunately one of those moments where you’re meeting your absolute biggest fan.”
money money money 10:20 a.m.
Glass Onion Solves the Mystery of Getting People Into Theaters The whodunit made an estimated $15 million from just 600 theaters.
how to 9:28 a.m.
11 Rules for Writing an Original Christmas Song in 2022 According to the people behind hits for Kelly Clarkson, Ariana Grande, *NSYNC, and more.
overnights 8:00 a.m.
Welcome to Chippendales Recap: Heavy Is the Head Nick and his artistry cannot live under the pressures of a patron like Steve.
coming soon 1:36 a.m.
Scarlett Johansson Finds Just Cause to Lead a TV Show It won’t be her first time starring in a project based on the book by John Katzenbach.
thanks fam Yesterday at 10:50 p.m.
Michelle Williams Shouted Out Her Grams From Dawson’s Creek Paying tribute to Mary Beth Peil in her Gotham Awards acceptance speech.
overnights Yesterday at 10:30 p.m.
Southern Hospitality Series-Premiere Recap: What Hath Leva Bonaparte Wrought? Bravo gives Leva Bonaparte the Vanderpump Rules treatment and spins off her and her band of merry, sexy, TV-ready employees into a franchise.
awards szn Yesterday at 10:18 p.m.
Everything Everywhere All at Once Tops 2022 Gotham Awards The only double winner of the night.
overnights Yesterday at 9:15 p.m.
Below Deck Recap: The Lost Boys Alissa and Camille are on a collision course. At least these guests are fun and easygoing.
when the party's over Yesterday at 7:47 p.m.
Don’t Get Too Attached to Billie Eilish’s Annual Vanity Fair Interviews From now on, she says she’ll release one “every few years.”
too much fun Yesterday at 4:53 p.m.
Is Aubrey Plaza’s Blonde Era Part of an Elaborate Prank? She might be in prank witness protection after filming The White Lotus.
vulture lists Yesterday at 3:30 p.m.
13 Holiday Horror Movies You Can Watch Right Now From classics like 1974’s Black Christmas to the 2018 zombie musical Anna and the Apocalypse.
doing something unholy Yesterday at 2:32 p.m.
Kim Petras Has ‘Nothing to Say or Be Ashamed of’ About Dr. Luke Collabs She was previously one of his loudest defenders.
More Stories