Not only was the cast of Saturday Night Live’s 40th-anniversary special filled with famous people, but so was the audience. Duh, it was no doubt the hottest ticket in town. Here’s who we could spot (and please help us identify those we might’ve missed!).

I spot (left to right) David Paterson, Colin Jost, Christine Baranski, and Brett Ratner. Below them, Al Sharpton and Joe Piscopo. Below them, John McEnroe. Below him, Rob Schneider and Chris Parnell. We see you, Diane Sawyer (and Joanna Newsom). Chris Lowell, too. 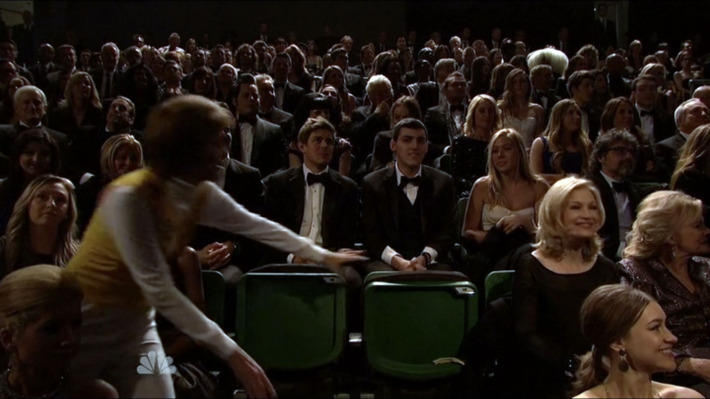 There’s David Spade sipping on some smuggled booze, Michael Douglas, Jerry Seinfeld right below Bob Odenkirk (who is having none of this), Larry David, Billy Crystal, Elvis Costello, and Miley Cyrus’s mom, Tish. 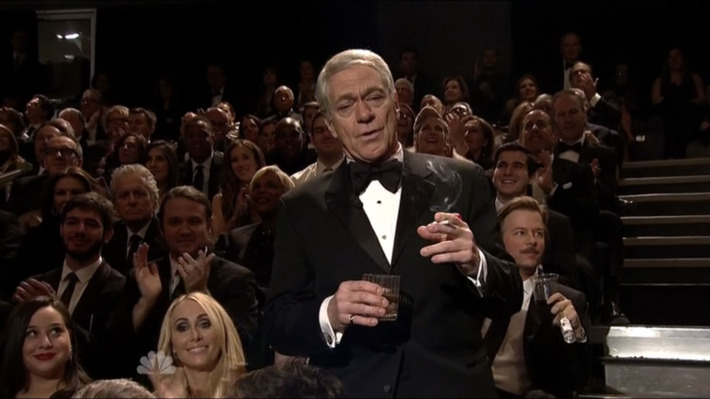 I spy Jack White’s pompadour, and is that Olivia Wilde two seats over? Below her you can see Bradley Cooper before he put on that “Californians” wig. 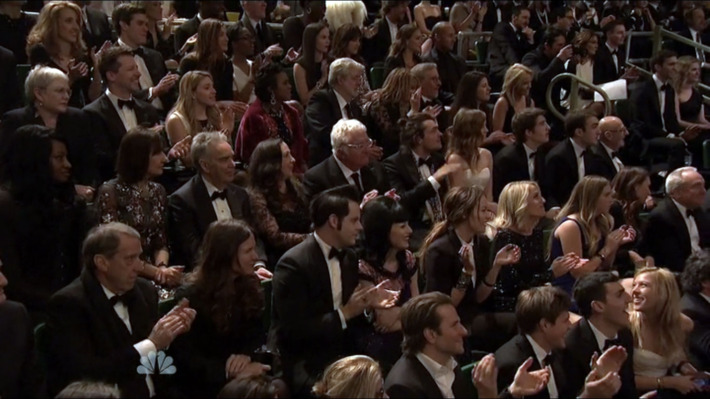 The no-longer-banned Elvis Costello is sitting right next to Paul Shaffer, and right below them is Catherine Zeta-Jones flanked by the Manning brothers and her husband, Michael Douglas. 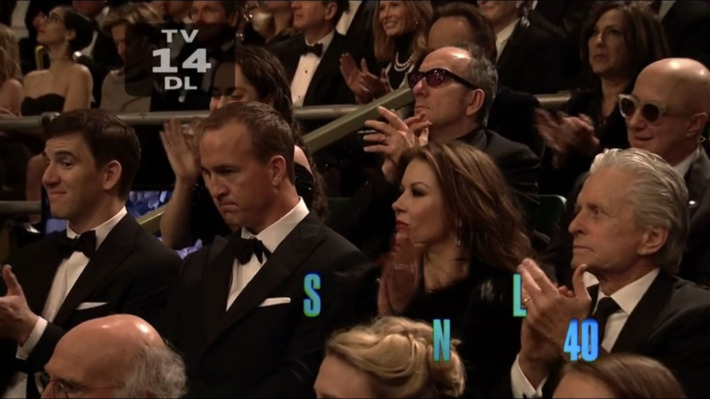 Did Win Butler bring Debbie Harry as his date? Did Rachel Dratch bring Ryan Phillippe as hers? And who is Colin Quinn boxing? (Whoopi?) 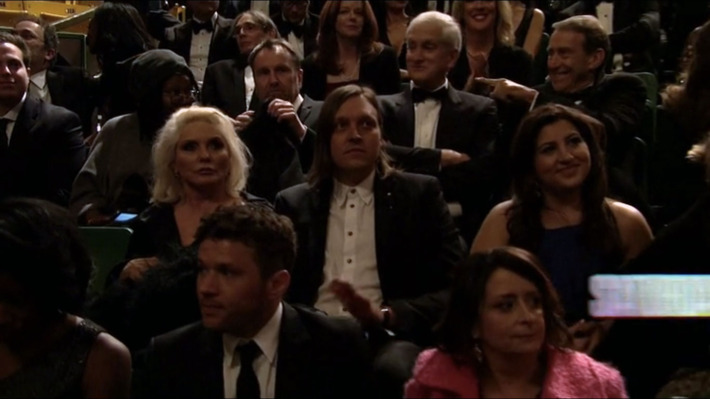 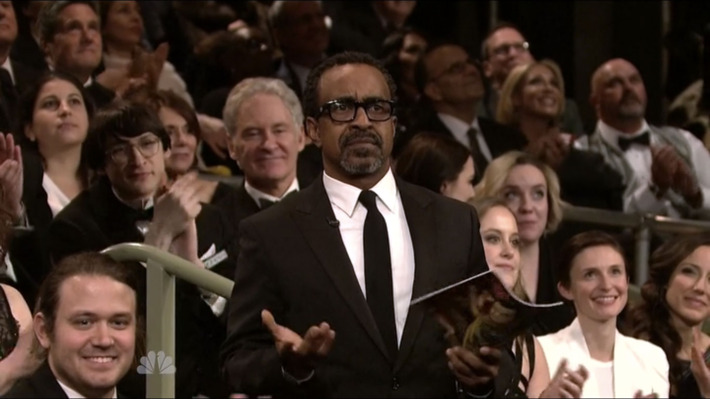 If you look into the blurry back row you can see Tom Arnold, Jeff Goldblum, and Jim Breuer. A grinning Dylan McDermott sits below, and Dakota Johnson sits to his left. While Bob Odenkirk ranted about the SNL writers, you could spot Cheri Oteri behind him, above Paul Rudd and below Taran Killam. Sitting just above all of them? Al Franken (who Odenkirk shouts out in his bit). Spotted: Sarah Silverman and Candice Bergen. Robert Smigel in the back! And onstage at the end near Maya Rudolph and Keith Richards? Melanie Hutsell. music Yesterday at 11:20 p.m.
Lizzo Countersued As ‘Truth Hurts’ Legal Drama Continues The truth hurts…but for whom?!
overnights Yesterday at 10:00 p.m.
RuPaul’s Drag Race Season Premiere Recap: The Bitch Is Back A jam-packed season premiere trots out some familiar twists from seasons past, along with an impressive (half) crop of new queens.
adult themes Yesterday at 9:18 p.m.
Hilary Duff Just Point-Blank Asks Disney+ to Let Lizzie McGuire Move to Hulu “I’d be doing a disservice to everyone by limiting the realities of a 30 year old’s journey to live under the ceiling of a PG rating.”
horror comedy Yesterday at 8:30 p.m.
Courteney Cox Moves from Cougar Town to Shining Vale In Horror-Comedy Pilot Relocating your dysfunctional family to a small town is never the answer, unless the question is, “How can I get ghosts?”
protests Yesterday at 7:17 p.m.
Portrait of A Lady On Fire Star Storms Out of Awards After Roman Polanski Wins Polanski skipped the César Awards to avoid a “public lynching” by feminist activists.
right click Yesterday at 7:13 p.m.
Roddy Ricch Is the One to Beat in His New ‘The Box’ Music Video The rapper is so fast, so furious in the video for his number one hit.
the industry Yesterday at 6:36 p.m.
Here Are All The Movies and TV Shows Affected By Coronavirus Films and TV shows are being delayed as the virus spreads across the world.
toy stories Yesterday at 6:24 p.m.
Plush Baby Yoda, Sad NickToons, and More From the 2020 New York Toy Fair Call us The Mandalorian because we’re taking The Child with us.
By Rebecca Alter
one-man shows Yesterday at 6:20 p.m.
A Comedian Brings His Darkest Family Secret to the Stage Anthony DeVito tells the true story of his father in his revealing one-man show.
overnights Yesterday at 6:00 p.m.
Altered Carbon Recap: Gemini Man Turns out that Takeshi Kovacs cannot be saved from himself.
spoilers Yesterday at 5:56 p.m.
I Am Not Okay With This Goes Out With a Bang The blood-splattered finale of Netfilx’s superpowered coming-of-age story is the culmination of a season-long remix of classic teen movies.
the sanctity of marriage Yesterday at 3:38 p.m.
Here’s What Happened to All the Totally Not Toxic Couples on Love Is Blind Lauren + Cameron = Luv 4Ever.
dixie chicks Yesterday at 2:44 p.m.
The Dixie Chicks’ First Song in 14 Years Is Imminently (Finally) Upon Us The title track to Gaslighter, the Texas trio’s first release since 2006, arrives March 4.
departures Yesterday at 2:30 p.m.
America Ferrera Will Check Out of Superstore at the End of This Season The show has been picked up for a sixth season without her.
vulture sports Yesterday at 2:15 p.m.
Beyoncé Needs to See This UCLA Gymnast’s Stunning Homecoming Floor Routine Twenty-one-year-old Nia Dennis turned her floor routine into Beychella.
kellyoke Yesterday at 2:05 p.m.
A Sax and a Smooth Instrument (Kelly Clarkson’s Voice) Covered Whitney Houston Is there a note she can’t hit?
one grand books Yesterday at 1:13 p.m.
Helen McCrory’s 10 Favorite Books From Fyodor Dostoevsky to Steve Coogan (yes, that one).
a closer look Yesterday at 1:12 p.m.
Director Leigh Whannell Talks How to Make an Invisible Man “I wanted people to be stressed from the first frame.”
follow friday Yesterday at 1:00 p.m.
Rosa Escandón May or May Not Be a Psychic “A lot of my tweets are just things that I see around: bathrooms, packages from my mom, turtles.”
trailer mix Yesterday at 12:53 p.m.
Tracee Ellis Ross Is a Pop Star in the Trailer for The High Note Is that an original song we hear?
More Stories