Like Taylor Swift at every other awards show, Oprah was the star of last night’s Oscar ceremony — if only because producers loved cutting to her in the audience. And per usual, she didn’t disappoint. She laughed, cried, and even responded perfectly to bad Neil Patrick Harris jokes! She did it all. Here are the Oscars through the eyes of Oprah. (A possible host for next year? Could you just imagine?)

When Neil Patrick Harris made a joke about her being really, really rich, comparing her wealth to the box-office gross of American Sniper. Weird and, well, duh. She knows she’s rich:

(Steadman, meanwhile, is learning this for the first time. Just kidding. Love ya, Steadman!)

When NPH goes to bother poor David Oyelowo in the audience, she’s there.

She “won” a Lego Oscar during the performance of “Everything Is Awesome,” and responded correctly:

After a moving peformance of “Glory” from Selma, she wiped Oyelowo’s tears dry.

And then had an awkward high-five confusion upon their Oscar win. If you snub Oprah for a high five, you remain in the doghouse for ten years. (It’s not proverbial; you have to live in a doghouse in Oprah’s backyard. Don’t worry, Common: It’s really, really nice.)

Oprah was even the star of Oscar winner Graham Moore’s speech (well, aside from all the sad stuff): “Thank you so much to the Academy and … to … Oprah,” he starts. 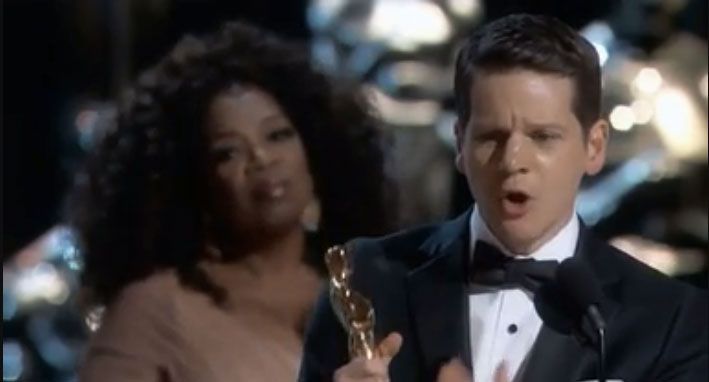 the gold rush 7:40 p.m.
Oscars to Bring You ‘Husavik’ in Húsavík, Best Song Noms in Pre-Show All five Best Original Song nominees will be performed during a pre-Academy Awards special.
follow friday 5:59 p.m.
Julia Young Was the Most Popular Girl at Sleepaway Camp We chatted it up with the comedian on Instagram Live today.
these reboots are manolos 5:33 p.m.
John Corbett Swears on Chanel Aidan Is in HBO Max’s Sex and the City Reboot SJP has neither confirmed nor denied this.
the industry 5:06 p.m.
Ryan Coogler Says Black Panther 2 Production Will Stay in Georgia But he condemned the controversial new voting law in an op-ed.
chat room 4:48 p.m.
Younger’s Molly Bernard Had a ‘Noble Duty’ to Fill Diana’s Shoes This Season “I gotta say, I didn’t do any neck training, and I regretted it.”
this week in late night 4:03 p.m.
Tooning Out the News Won Late Night This Week Plus “Steve” Colbert and a very sexy slide whistle.
spoilers 3:43 p.m.
That Falcon and The Winter Soldier Reveal Is More Than Just a Fun Cameo Debuting this particular character at this particular stage in the MCU opens up some intriguing future scenarios.
tv review 3:06 p.m.
Big Shot Shoots and Mostly Scores John Stamos plays basically the anti–Ted Lasso in Disney+’s new family drama centered on a girls’ basketball team.
overnights 2:51 p.m.
Mythic Quest: Everlight Recap: Believe in the Light A characteristically chaotic office celebration for a fictional holiday finds Mythic Quest, and us, reveling in a post-pandemic return to normalcy.
art world 1:32 p.m.
Helen Marden’s Bitter, Lucky Light Her joyful-despite-everything pandemic paintings at Gagosian.
obits 1:10 p.m.
Helen McCrory, Peaky Blinders and Harry Potter Actor, Has Died at 52 She also had a prolific stage career, appearing in over 25 productions since 1990.
books 12:44 p.m.
Simon & Schuster Won’t Distribute Book by Cop Involved in Breonna Taylor Killing The bar is on the floor, folks.
two friends 12:41 p.m.
Hank Azaria Elects Richard Kind the Mayor of Hollywood “You know everybody.”
movie review 12:37 p.m.
Sebastian Stan Makes Monday a Movie Worth Waking Up For The actor and costar Denise Gough give it their all.
my single is dropping 12:21 p.m.
Brothers Osborne Release ‘Younger Me,’ Inspired by T.J.’s Coming Out “I’ve always wished I could speak to my younger self, give him a hug and show him who he’d become.”
evil stepsisters 12:06 p.m.
Barb & Star Made a Deal With Bob Iger Kristen Wiig and Annie Mumolo are writing a “fairy tale musical comedy” about Cinderella’s sisters.
bachelor nation 11:58 a.m.
Colton Underwood Addresses Cassie Randolph Allegations: ‘I Made Mistakes’ “I’m extremely, extremely sorry.”
matt berry 11:53 a.m.
Matt Berry Ushers in Cool-Middle-Aged Man Summer With a New Single Get ready for some crunchy guitar solos, kids.
overnights 11:51 a.m.
Younger Recap: The Motion of the Ocean This Quinn thing is going to be the worst, isn’t it?
best of 2021 11:50 a.m.
The Best Books of the Year (So Far) The slate for 2021 — of fiction and nonfiction alike — is bursting with vibrancy and verve.
By Hillary Kelly
More Stories