My Week in New York: A Saturday newsletter from the Editors.
Sign Up
|
Photo: Disney and ABC

Remakes, comebacks, and sequels are rarely good, but that doesn’t mean we’ll ever stop making them. Nostalgia (not to mention money) is a powerful force, one that can pull any well-meaning creative bringing back beloved characters for another go. That’s why it was rather surprising when Girl Meets World, the Boy Meets World sequel that debuted on Disney last year (14 years after the original ended its seven-season run), turned out to be so wonderful. We might never know exactly how Girl Meets World managed to capture the magic of its forefather, but with the show wrapping up its first season last Friday, here are a few educated guesses (and reasons why you might want to give it a shot):

The original Boy Meets World writers.
Perhaps the biggest factor here is that Boy Meets World writers and co-creators Michael Jacobs and April Kelly both came back to write and produce Girl Meets World. You think you know the entire history of Boy Meets World, front to back? Well, imagine if you wrote it. These two must be walking encyclopedias of the show they gave birth to, knowing exactly which buttons they can push (and oftentimes push again). Some of Girl Meets World’s best moments are the ones that take a look back at Boy Meets World and compare Cory Matthews’s childhood to that of his daughter. Everything from relationship dynamics (compare those of Cory and his students to Mr. Feeny and his students) to small Easter-egg references, like the adorable way Cory and Shawn snooze:

The student has become the teacher (and father).
Cory doesn’t have the same role in Girls Meets World as his dad had in Boy Meets World. Knowing that the original’s fans would want more, Cory is both the dad and the Mr. Feeny. Not only does it allow fans of the original to check in on a formative character of their youth, it’s also a clever device because Cory can translate the cheesy lessons he learned in Boy Meets World into cheesy lessons he can teach in Girl Meets World — “No matter what you do, the truth always finds a way of coming out,” he says in “Girl Meets Truth,” after Riley struggles with the concept of white lies. In the end, Cory ends up learning something, too — lying to Topanga about her cooking might’ve been the right idea, even if it wasn’t the truth. This tone really is the key to making the entire thing feel so unforced and not manipulated by time and convenience. (Speaking of Topanga, it’s nice to see her paired with a toddler, Auggie, as her sidekick. She was always the best when being silly.)

A truly insane amount of the original Boy Meets World cast.
Sometimes you get reunions because everyone’s free. And there’s always money. (See: the Backstreet Boys.) Sometimes there are reunions we all want to see, but they’ll never happen because one of the key particpants got a little too famous. (See: ’N Sync.) Girl Meets World lives somewhere in the middle: These actors are all working, sure, but they can definitely find time to revisit their lives as Matthewses. The ideal situation? Imagining that throughout those seven seasons, these people actually enjoyed each other’s company. (Why not? Many of them practically grew up togther.) We’ll never know, but while Girl Meets World adds younger fans, they’re also pleasing us nostalgic elders by bringing back some of BMW’s best characters — including Shawn, Feeny, Alan and Amy Matthews, Minkus, and Angela and Shawn’s dad. Even more heartwarming? Shawn (Rider Strong) himself directed the season finale: 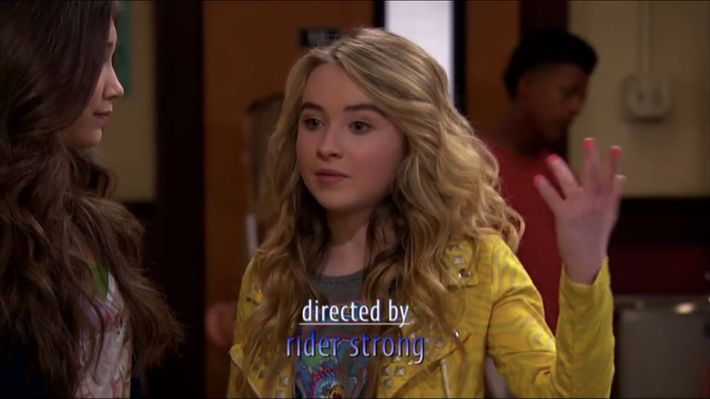 Shawn Hunter vs. Maya Hart
Speaking of Shawn, what Girl Meets World does so perfectly is weave the well-worn histories of its former (and returning) cast members into the lives of its current cast members, without weighing too heavily on either side. Take the relationship between Maya (Sabrina Carpenter) and Shawn. These BFFs have a lot in common: Maya doesn’t have a stable home life, and neither did Shawn. Shawn had a gruff, pretty much deadbeat father, and a mother who left when he was just a kid. Maya’s mom is a hardworking but often neglectful waitress who “forgets” Maya’s birthday; her dad has “another family.”

In one episode, Shawn returns but, surprisingly, isn’t too nice to Cory’s daughter Riley, a.k.a. the titular Girl. Riley wonders how her father’s best friend could treat her so poorly before realizing that it’s out of jealousy: Cory has the life Shawn wants. “Every time I came here, it reminded me of what I didn’t have,” Shawn admits to Cory. So Riley smartly sets him up with the equally detached and cynical Maya, who could also use a mentor. “Look at them,” Riley says to her dad as she watches her best friend and his best friend sitting next to each other on the window seat. “They’re us.”

(Fun and random conspiracy-theory time: Could Maya actually be Shawn’s kid? This vlogger seems to think so. Although, when Shawn and Maya’s mother met for the first time, they didn’t seem to reference any previous tryst. But that doesn’t mean Shawn doesn’t have the opportunity to become a stepfather …)

The heart of the original
From Mr. Feeny’s weekly life lessons to Topanga and Cory’s burgeoning romance, BMW was nothing if not satisfyingly saccharine. But that’s what made it special. Girl Meets World not only has a grown-up Cory Matthews, but also his carbon-copy daughter Riley, whose wide-eyed optimism and unrelenting goofiness match those of dear old Dad. In “Girl Meets Friendship,” the gang all compete against each other in a run for class president. Riley goes full princess: “Say good-bye to too much studying,” she says atop a faux unicorn. However, after learning a lesson about competing with your friends, she makes a video for Lucas, who just moved to New York from Texas, of his old friends endorsing him. Lucas wins and appoints Riley princess. She’s truly carrying on the family tradition of unrelenting heart. (Don’t worry, Cory can still bring the schmaltz. You don’t need much context to cry from watching the below video.)

tv review 4:40 p.m.
Shadow and Bone Almost Gets Lost in the Dark Netflix’s adaptation of the Grishaverse novels pulls it together in the end, but only after traversing a vast, foggy muddle of exposition.
this! is! jeopardy! 4:00 p.m.
LeVar Burton Will Fly Twice As High As Jeopardy!’s Next Guest Host He had been campaigning for the gig.
tv 3:46 p.m.
Master of None Season 3 Will Premiere on Netflix in May After a four-year-long hiatus.
anime 3:35 p.m.
The Demon Slayer Movie Is Breaking the Mold and Shattering Records Japan’s highest-grossing film ever, Mugen Train, is pulling into the station in North America. Here’s what you need to know.
the streaming wars 3:30 p.m.
Shudder Knows What You’ll Stream This Summer How the horror streamer built a service even the snobbiest superfans would approve of.
broadway 2:35 p.m.
Hugh Jackman Belts Out a Statement About Scott Rudin in All Caps Must get rid of toxic in community.
bethenny hiring a vp 2:23 p.m.
Bethenny Frankel Needs Someone to Run Her Goddamn Circus The Big Shot With Bethenny heads to HBO Max next week.
i would like to see it 2:17 p.m.
Whoopi Goldberg Is Writing a Superhero Movie About an Older Black Woman “Do you know who’s really going to save the earth?”
a total knockout 2:00 p.m.
The Mortal Kombat Theme-Song Creators Didn’t Know They’d Created a Knockout Olivier Adams and Maurice “Praga Khan” Engelen created a winner in 1994, one still ringing in our ears to this day.
meet cutes 1:30 p.m.
Hilary Duff Will Recount How I Met Your Father for Hulu Sequel Series Self explanatory.
hair and makeup 1:27 p.m.
How Ma Rainey’s Oscar-Nominated Hair and Makeup Team Transformed Viola Davis The Oscar-nominated creatives behind the star’s wigs and glam take us through what it took to make over one of Hollywood’s most recognizable women.
By Emma Fraser
rankings 1:23 p.m.
Okay, Let’s Talk About ARTPOP Talented! Brilliant! Incredible! Amazing! Showstopping! Spectacular! Never the same! Totally unique!
By Wolfgang Ruth
adaptations 1:11 p.m.
Antoine Fuqua Will Direct an All-Black Cat on a Hot Tin Roof Movie Inspired by the 2008 Broadway revival of the Tennessee Williams classic.
the gold rush 12:33 p.m.
All 56 Movies Nominated for an Oscar This Year, Ranked Some might suggest our ranking of every nominated film is subjective, but we might suggest you let the truth just sink in.
By Joe Reid
going independent 12:18 p.m.
Tim Heidecker Takes On Cinema Straight to the People “You can build a Netflix if you have an audience that wants to watch your shit.”
By Chris Kopcow
vulture lists 12:00 p.m.
8 Great Audiobooks to Listen to This Month Caroline Kepnes, Brandi Carlile, Jonathan Ames, and more.
verzuz 11:51 a.m.
Method Man and Redman Ruined Our High by Calling Russell Simmons During Verzuz The disgraced Def Jam founder has been accused of sexual assault and misconduct by 20 women.
tv review 11:17 a.m.
Romeo and Juliet, Horny on Main The TV film starring Josh O’Connor and Jessie Buckley is the lust-dazed, modern-dress version of the Shakespeare tragedy you didn’t know you needed.
By Helen Shaw
quibi 10:16 a.m.
Quibi Is ‘Roku Originals’ Now, But Don’t Try Rotating Your TV From a phone app you never opened to “the biggest screen in the home.”
friday night movie club 10:11 a.m.
Twilight Is Forever Camp-Cringe Royalty Give Bella Swan a Nobel Prize now.
More Stories