“Tell the hacker, ‘I’m incredibly aroused by your promise of a spectacle,’” says Oscar-winner Patricia Arquette with a straight face. Photo: CBS

This week’s episode of CSI: Cyber is called “CMND:\Crash”, which is — just guessing here — hacker-speak for “Command: Crash.” Looks like this week, the Cyber gang is gonna take on some guy commanding things to crash.

The episode opens with some backstory. Avery Ryan explains how back when she was a psychologist, she got hacked. One of her patients ended up dead because of the hacking. It sounds very sad. Hacking seems bad. 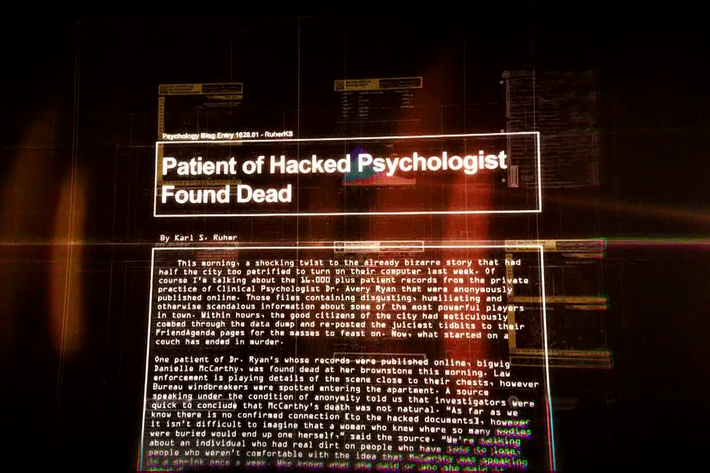 Hackers are everywhere, Ryan tells us, “just a keystroke away.” Don’t believe her? Maybe this graphic will convince you. 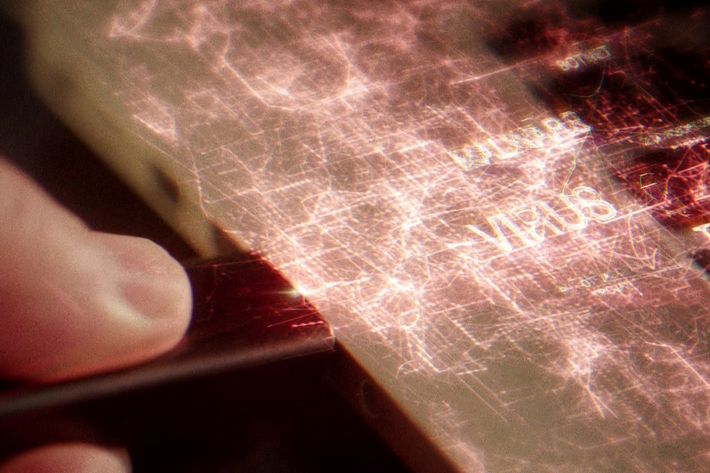 Still not convinced? How about now?

Maybe laying it on a little thick there, CSI.

Our mystery of the week begins at a theme park in Richmond, Virginia, where a hacker has decided to kill people by hacking a roller coaster with his cell phone. (Reminder: It can happen to you …)

It’s time to rally the troops and solve this devastating roller-coaster cybercrime. Agent Ryan decides that the easiest way to wake up Agent Nelson (Bow Wow) is by hacking his car alarm.

“It took all of five minutes to crack your vehicle passcode and load the app that allowed me to remotely take control of your car,” Ryan boasts. 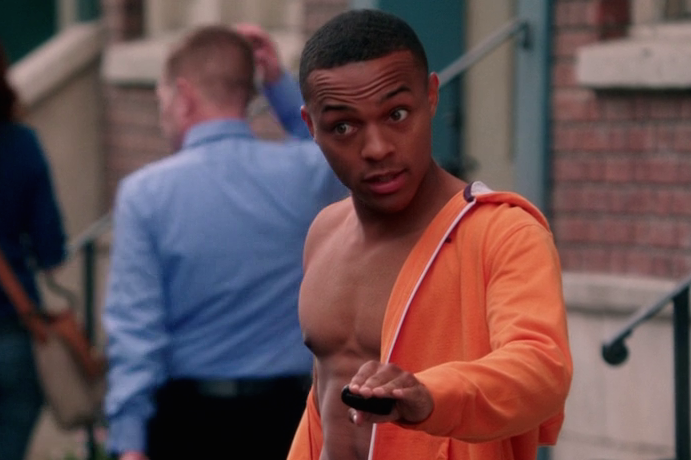 Over at the Cyber Threat Operations Center, the agents analyze the coaster’s schematics. “Somebody breached the roller coaster’s computer,” Ryan deduces, “and compromised the code.”

Her boss continues the thought: “… Making that computer an accomplice to murder.” Can you arrest a computer for murder? The answer, according to CSI: Cyber, is “probably.”

It turns out that the coaster’s computer never even detected a crash. The hacker had to have gotten into the ride’s control computer and tampered with it. Like this: 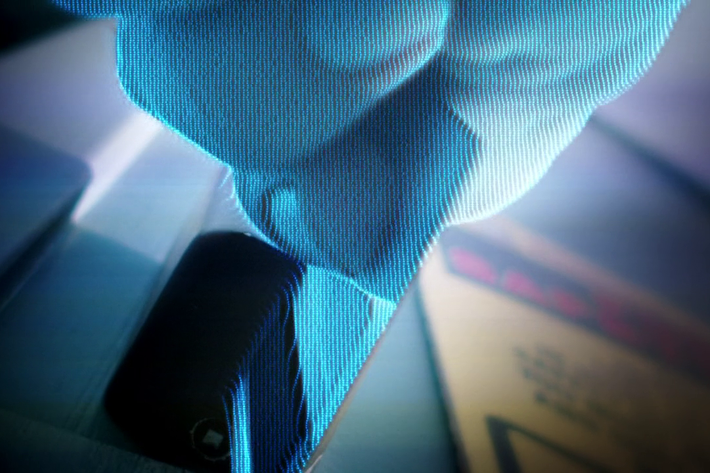 Krumitz discovers that an extra motherboard was slipped into the coaster’s computer. He explains this to Agent Ryan — the person who literally runs the FBI’s cybercrime unit — by using his sandwich as a metaphor. 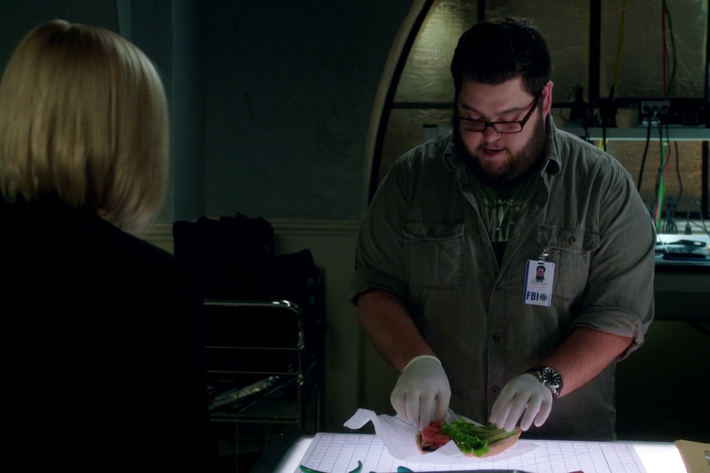 “So I always order a Large and Tasty from the sub shop around the corner, with bacon. But the Large and Tasty doesn’t come with bacon — something you’d only know if you were familiar with the menu. The bacon is disguised because it looks like part of the sandwich. That extra panel looks exactly like the other six.”

These are the best cybercrime investigators in the world! Using sandwiches to demonstrate how a computer bay works!! This show is amazing.

Krumitz continues: “Ready for the scariest part? A single-board computer like this can be found anywhere online for about 50 bucks.” Whaaaaaaaaaaaaaaaaaaatttttt????????

Again, Krumitz: “It’s so easy, a 9-year old could use it.” WHAAAAAAAAAAAAAATTTTTT?????? Baby hackers, they could be everywhere.

Her boss makes his “I fully understand what you’re saying” face. 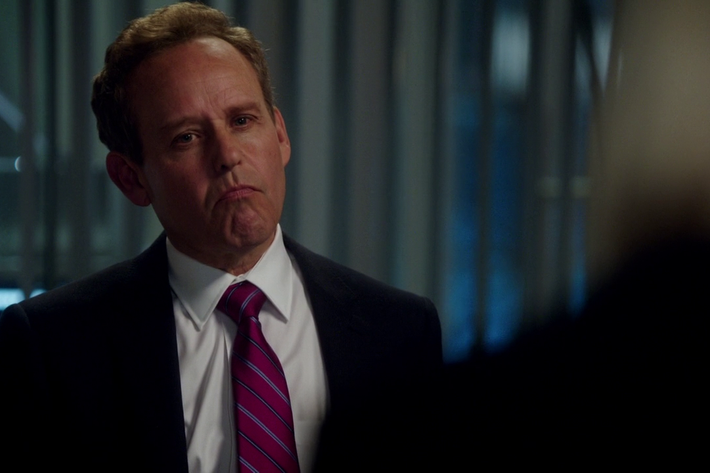 Ryan tells Bow Wow to go undercover on a deep web gore-porn forum to help find the culprit. Here are the usernames that he tries to sign up with: KillerEyes81 (already taken!), Catastrophic41 (also taken!), and Naughty99 (not taken!). 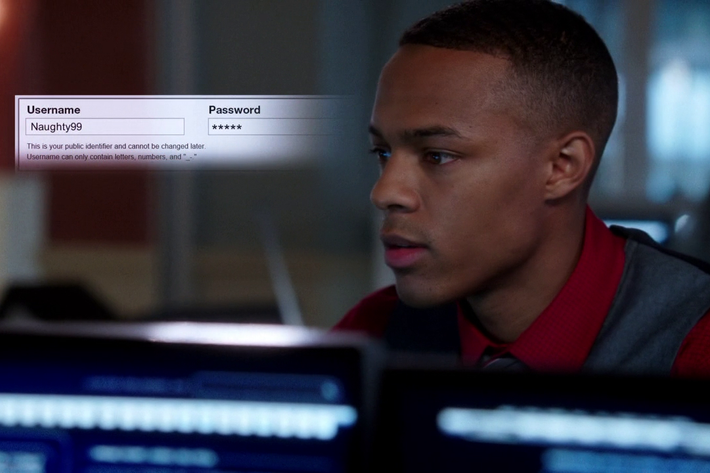 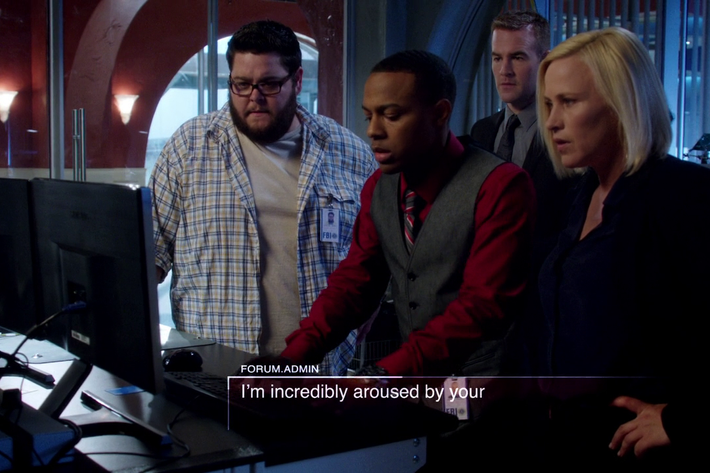 They get booted from the forum, which somehow causes the FBI computer to blue-screen (???), but not before finding out that the hacker is targeting the Boston subway system. The team races to stop a rapidly accelerating train.

A lot of nonsense happens, but long story short, Agent Mundo manages to stop the runaway train controlled by an elite hacker by poking at a computer chip with a wire hanger. 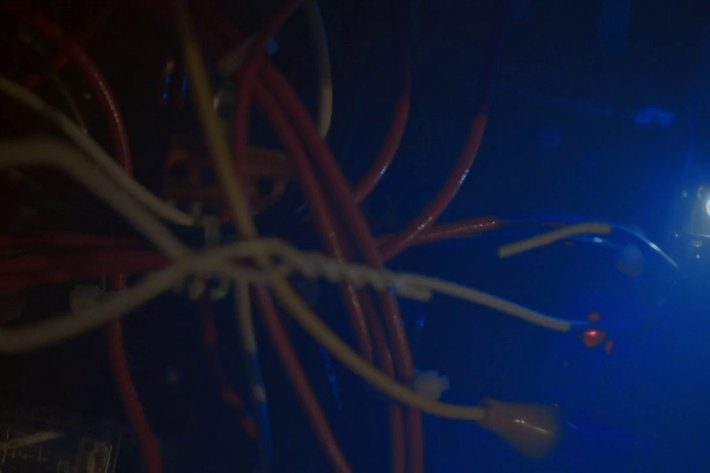 Otto is arrested, the day is saved, Krumitz steals Bow Wow’s girlfriend (??????), everyone goes home. Just another day at the FBI.

The moral of the story is that computers can — and almost certainly will — kill you. Computers are everywhere, and they are plotting your demise. So ends another thrilling episode of CSI: Cyber.

on set emergency 10:20 p.m.
Alec Baldwin ‘Discharged’ Prop That Killed the DP and Injured Director on ’Rust’ Halyna Hutchins, the Director of Photography, was 42.
overnights 9:29 p.m.
RuPaul’s Drag Race U.K. Recap: Groundhog’s Gay Seems like the lackluster double save killed the competitive spirit this week.
spicy pisces 9:07 p.m.
Olivia Rodrigo Glows in Arcade Lights in ‘traitor’ Liv is in the clouds like a true Pisces
streamliner 5:30 p.m.
Roku and YouTube Are Fighting in Public Again After December 9, their deal’s done.
now streaming 5:30 p.m.
Checking In On Netflix’s Original Movies: October 2021 Edition A Jake Gyllenhaal thriller, a Peruvian psychodrama, and an animated spin-off of Bright.
lads 5:21 p.m.
Franz Ferdinand Drummer Says Take Me Out … of the Band “It was a bit of a shocker for us when we found out.”
renewals 5:15 p.m.
Anthony Hopkins Doesn’t Care That Mythic Quest Is Renewed for Seasons 3 and 4 We, on the other hand, are thrilled for “Mr. Quest” or whatever.
buffering 4:00 p.m.
Let’s Overanalyze Netflix’s New Viewing Metrics The streamer has a new ratings methodology. We dive in.
beyoncé?! 3:56 p.m.
Beyoncé Lobs Her New Song ‘Be Alive’ Into the King Richard Trailer Her 2022 Oscar campaign begins today.
good one podcast 3:51 p.m.
Ricky Velez Is a Real New York City Stand-up  The comedian joins this week’s Good One to discuss his new special.
stand-up 2:46 p.m.
Dave Chappelle the Comedy Relic After a decade of teaching Chappelle’s comedy to college students, a professor comes to terms with the fading relevance of the one-time GOAT.
By Danielle Fuentes Morgan
awards season 2:41 p.m.
The Gothams Announce Their Nominees, Gender-Neutral Acting Categories For the first time, the independent film and TV awards body has gender-neutral acting categories.
fandom 2:19 p.m.
Behold, Adele’s Framed Piece of Gum Chewed by Celine Dion “It’s pretty amazing.”
podcasts 1:35 p.m.
Why Michael Hobbes Won’t Tell You You’re Wrong Anymore The popular podcast host explains his departure from You’re Wrong About.
spoilers 1:33 p.m.
Let’s Talk About the Ending of Only Murders in the Building … and how it and the entire season consistently surprised us.
vulture festival 2021 1:30 p.m.
3rd Rock From the Sun and Cowboy Bebop Are Coming to Vulture Festival Dancing With the Stars, Bosch with Hollywood Handbook, Sarah Silverman, Seth Rogen, and much, much more just got added to our lineup!
blabbermouths 1:20 p.m.
Is Brian Cox Allowed to Be Saying All This? L-to-the-O-G off, Brian.
becoming bill 1:13 p.m.
How Impeachment Transformed Clive Owen Into Bill Clinton “I have a memory of Clive in his full Clinton prosthetics chasing me down a hallway of the West Wing set because he was so excited.”
trailer mix 1:06 p.m.
Tom Holland and Mark Wahlberg Are Hunting for Treasure and Trouble in Uncharted Just two adventure hunks chasing the bag.
now streaming 12:28 p.m.
A Spooky Guide to All the New Horror Streaming This October Horror fans with big streaming budgets are in for a treat this year.
More Stories