Empire burst onto the pop-culture scene back in January, filling the blank space for an outrageously over-the-top, 1980s-style prime-time soap opera we didn’t even know existed. Vulture has since done our best to chronicle its effect on everything from the TV and music industries to fashion and the national lexicon. But sometimes the best way to measure impact is through the Magical Power of Charts and Graphs. And so here it is — the story of just how massive a hit Empire is after only one season, as told through seven Cookie-powered infographics. Read on to discover who’s watching the show, how they’re watching it, and how it compares to TV’s other big hits of the past decade. (Click here for our analysis of the “Empire Effect.”) 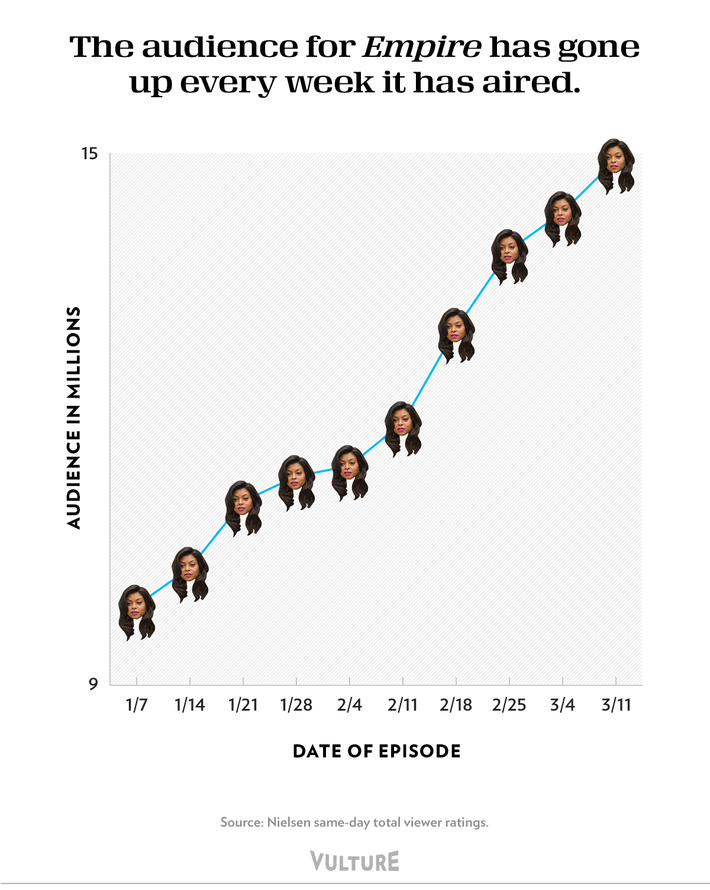 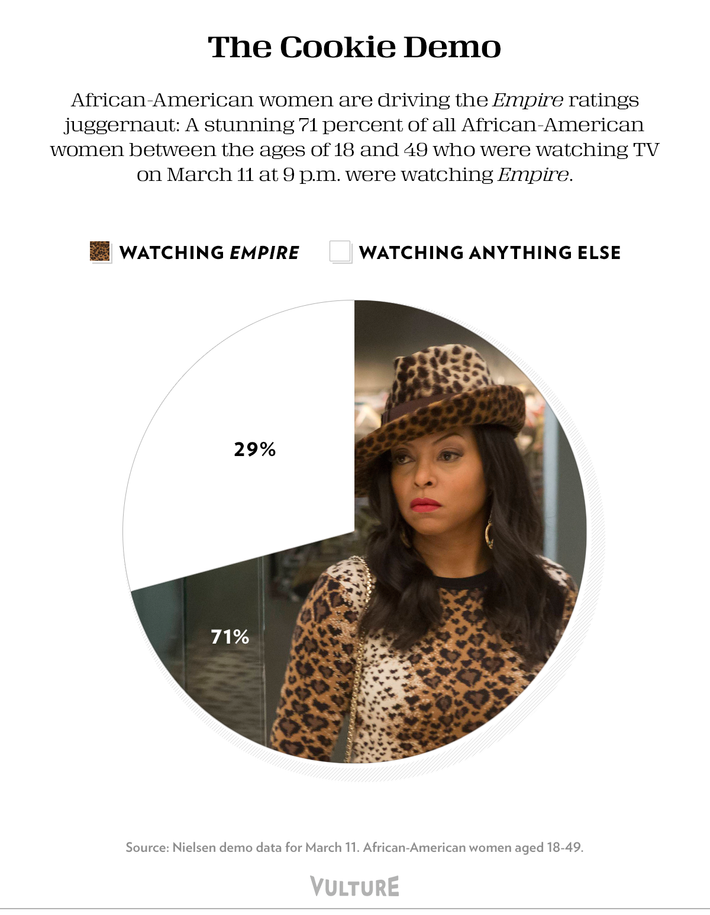 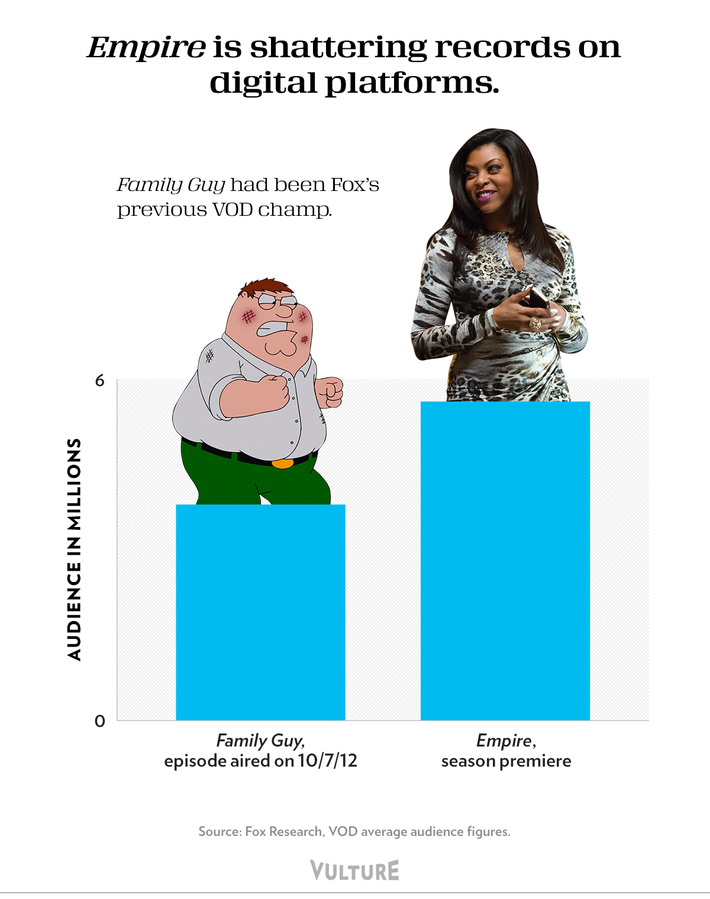 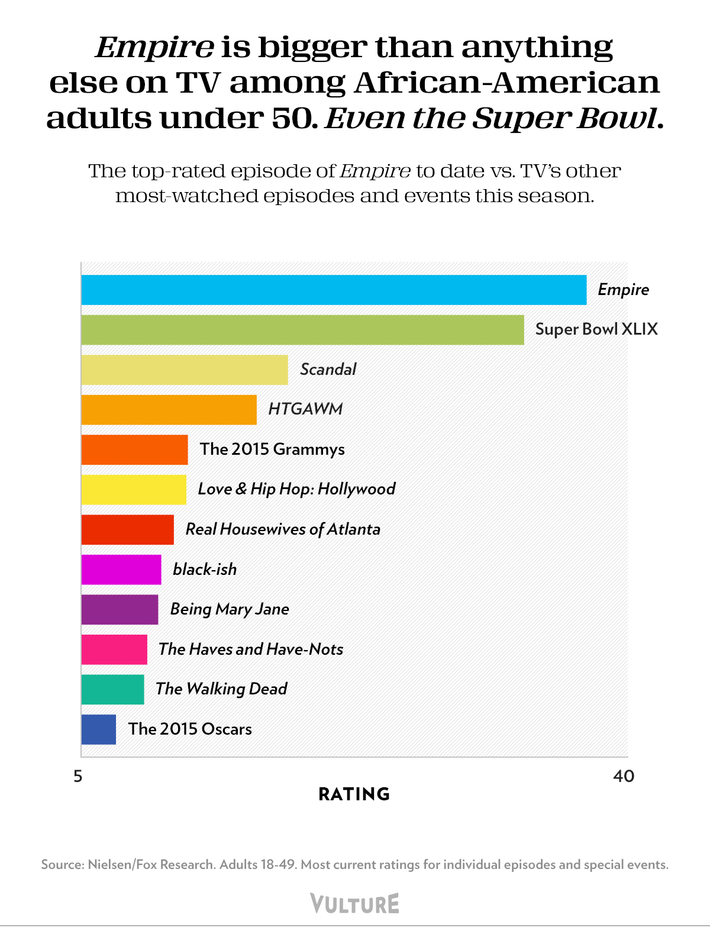 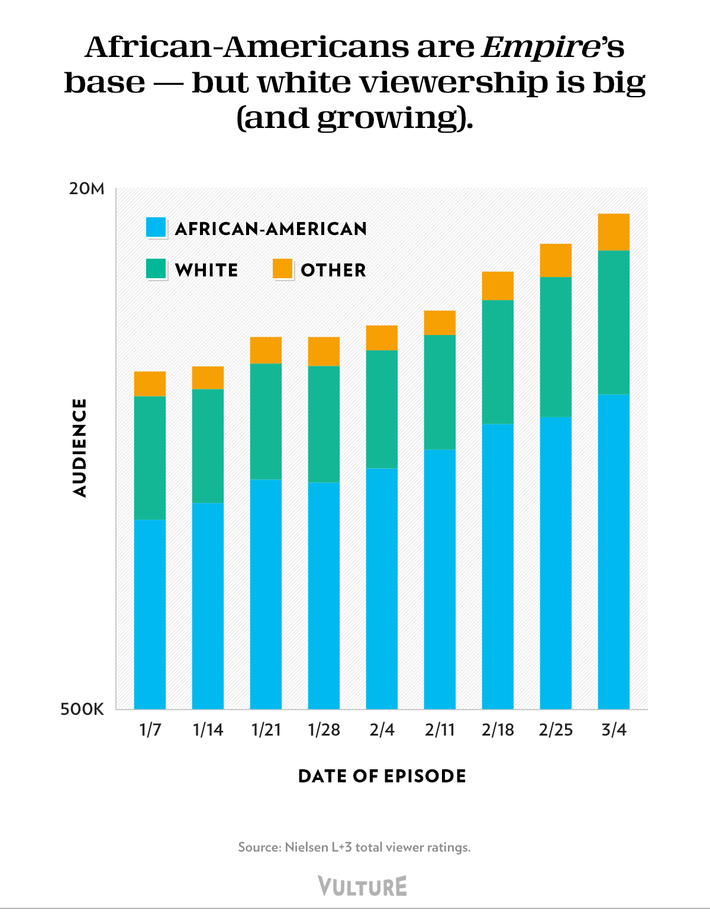 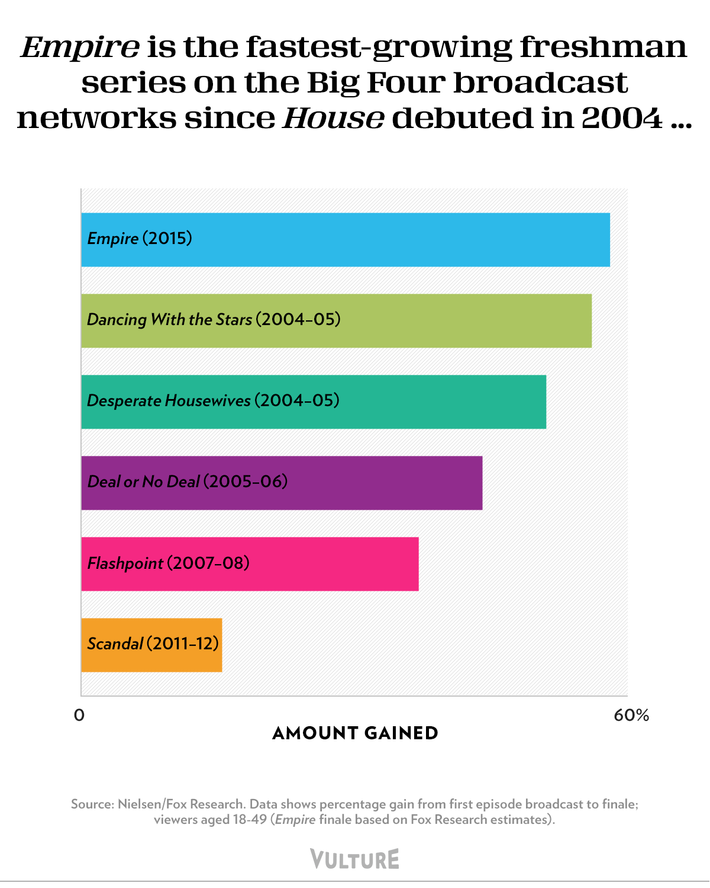 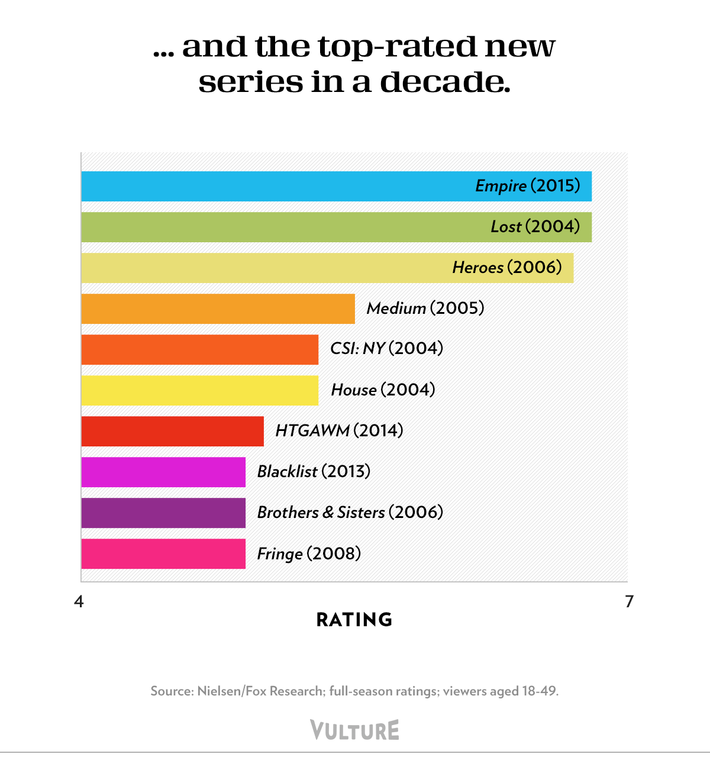 +Comments Leave a Comment
The Rise of Empire, in 7 Charts

1.5x speed 3:05 p.m.
Shaking Out the Numb, How It Happened, and 3 More Podcasts Worth Trying Including the end of Trump, Inc.
vulture lists 2:45 p.m.
Megan Amram’s 103 Best Trump Tweets, Ranked Megan Amram has hundreds of great Trump tweets. Here are the best of the best.
By Megh Wright
extremely online 2:06 p.m.
Okay, You Can Unmute @POTUS Now The Twitter handle is under new management.
inauguration day 1:42 p.m.
Return to Normalcy With Some Bernie Sanders Memes The only man who dresses for January, ladies and gentlemen.
bye 1:35 p.m.
Donald Trump Went Out As He Came in: Playing Songs by People Who Hate Him A perfect season-finale moment.
we did it joe 1:07 p.m.
Jennifer Lopez Slips ‘Let’s Get Loud’ Into Her Biden Inauguration Performance A new era indeed.
inauguration day 12:39 p.m.
Watch Lady Gaga Perform the National Anthem at the Biden Inauguration Obama, Biden, Bush, and more attended a one-song Lady Gaga concert today.
inauguration day 12:36 p.m.
Watch Amanda Gorman’s Historic Poetry Reading at the Biden Inauguration “But while democracy can be periodically delayed, it can never be permanently defeated.”
inauguration day 12:32 p.m.
Garth Brooks Turns ‘Amazing Grace’ Into a Sing-along at Biden Inauguration He even took off the hat.
vulture lists 12:30 p.m.
The 20 Best Movies About American Presidents Frost/Nixon, Secret Honor, Lincoln, and more.
bachelor nation 10:58 a.m.
Did Matt James Seriously Just Spoil His Bachelor Winner on … Spotify? Somebody tell this man that his streaming history is public.
lime crime 10:18 a.m.
Dakota Johnson Lied to Us About Loving Limes You can’t spell “limes” without “lies.”
reality tv 10:09 a.m.
Real Housewives of Salt Lake City Will Return for Season 2, Andy Cohen Confirms Keep those Wednesday nights open.
vulture recommends 9:00 a.m.
Call My Agent! Brings a Succession Energy to the Parisian Entertainment Industry The French series offers an alluring new vantage point on the industry-insider machinations we typically associate with Hollywood stories.
last night on late night 2:03 a.m.
Seth Meyers Takes One Last Closer Look at the Trump Presidency “You left the nation in ruins.”
pardon? 12:00 a.m.
Trump Pardons Lil Wayne on His Last Day in Office Along with Kodak Black.
covid-19 Yesterday at 6:59 p.m.
Nurse Lori Marie Key Sings ‘Amazing Grace’ at COVID-19 Memorial Vice President-elect Kamala Harris introduced her.
inauguration day Yesterday at 6:30 p.m.
Here’s How to Watch the 2021 Presidential Inauguration of Joe Biden What time is it? Can I watch it if I don’t have TV? What’s the deal with the Celebrating America prime-time special? We have the answers.
obituary Yesterday at 6:08 p.m.
No One Was Safe from Phil Spector The producer made countless contributions to music, but his ego overshadowed them all.
extremely online Yesterday at 6:05 p.m.
James Charles Covers ‘Drivers License,’ Reminds You That He Sings The MUA took on Olivia Rodrigo’s hit song.
More Stories