Everyone’s favorite sentient space-tree will be getting his own comic. Marvel has hired Jeff Loveness (a comedy writer for Jimmy Kimmel Live!) and Brian Kesinger (of Disney) to draw Groot his own comic. According to Marvel’s logline, the comic will follow Groot after he gets separated from his partner, Rocket Raccoon, and promises “EXPLOSIONS, SPACE SHARKS, ALIENS, AND INTERGALACTIC HITCHIKING.” Loveness told Mashable, “It’s a challenge, and also part of the fun. Being a comedy writer on TV, you make your living on words and turns of phrase and jokes. So with Groot you’ve gotta dig deep and find a lot of physical comedy.” Aww, our little sapling is all grown up!

Take a look at the cover: 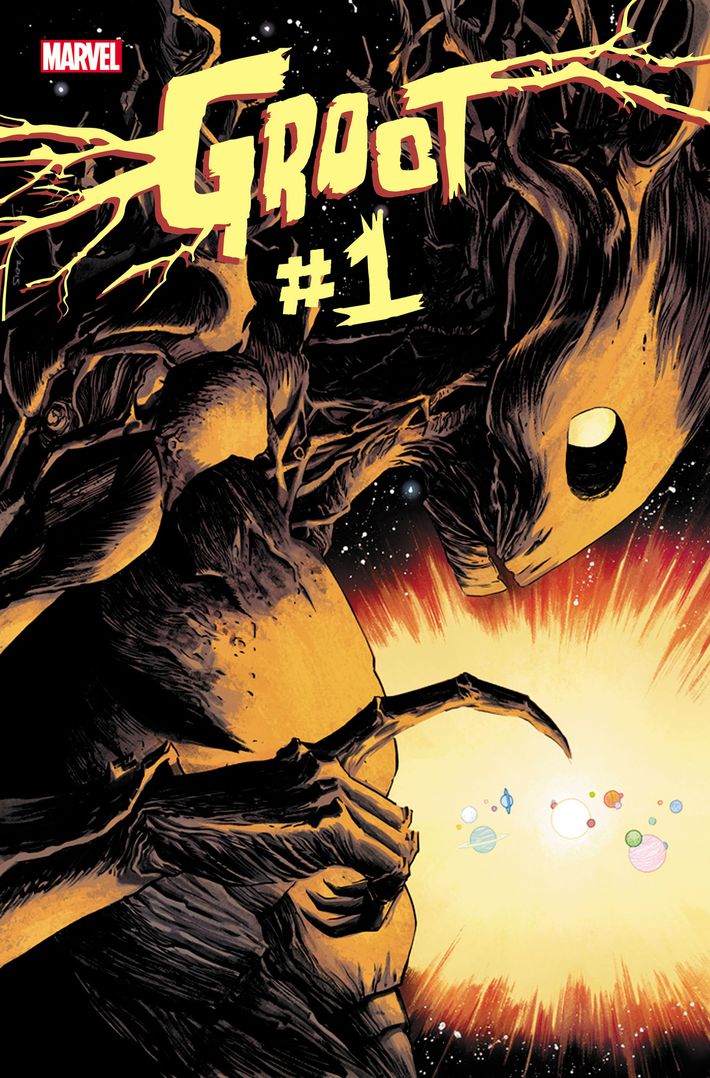 art 2 mins ago
Jasper Johns and Me The artist who invented contemporary art also changed my life, writes Jerry Saltz.
By Jerry Saltz
trailer mix 9 mins ago
Warning: The Sex Lives of College Girls Teaser Plays the Annoying iPhone Alarm “It sounds like it’s inside my head!”
streamliner 15 mins ago
How Do You Say the Name of Comcast’s New Streaming Box? Also: What is it?
the law 24 mins ago
Woman Suing Nicki Minaj Claims She Was Threatened With Bounty Jennifer Hough, who accused Minaj’s husband Kenneth Petty of rape, spoke out on The Real.
interview 29 mins ago
Annaleigh Ashford Wants You to Empathize With Paula Jones The Impeachment star on acting opposite a roomful of men and wearing Jones’s real clothes onscreen.
🍿🍿🍿🍿🍿 1:00 p.m.
On Cinema at the Cinema Is Returning for Season 12 Stock up on your HEI Points, Tim Heidecker and Gregg Turkington are going crypto.
c'est tip top! 12:33 p.m.
Regardez Wes Anderson’s Animated Music Video for The French Dispatch It’s like a Where’s Waldo? of Wes Anderson regulars.
overnights 12:18 p.m.
Nine Perfect Strangers Series-Finale Recap: Lose Control An underwhelming finale fully rehabilitates Masha’s manipulative nature and gives everyone happy endings that aren’t satisfying.
movies 12:13 p.m.
Eddie Murphy Is Coming 2 a First-Look Film Deal With Amazon Including three starring roles.
sexy beasts & where to find them 11:35 a.m.
Netflix Is Bringing Sexy (Beasts) Back for Season Two They had a lot more skin suits gathering dust in the freak factory.
box office 11:31 a.m.
Dear Evan Hansen and the Terrible, Horrible, No Good, Very Bad Reviews Could the movie musical be the next Greatest Showman? Early negative reviews suggest yes, but producers hope fans show up anyway.
the streaming wars 11:17 a.m.
Netflix Gets the Golden Ticket to Roald Dahl’s Catalogue Or maybe the goose that lays the golden egg? There’s a lot of money involved.
overnights 11:12 a.m.
﻿Sex Education Season-Finale Recap: A Rush of Connection The season ends with a lot of ambiguities, but the finale also shows just how far all the characters have come.
;) 10:08 a.m.
Netflix Announces Sex: Unzipped, a Sex-Positivity Special Hosted by Saweetie With special guests Dominique Jackson, Joel Kim Booster, Trixie Mattel, and a gaggle of puppets.
book excerpt 10:00 a.m.
Phoebe Robinson’s Guide to Being a Boss An excerpt from the comedian’s new book.
By Phoebe Robinson
my single is dropping 9:45 a.m.
J. Cole’s Back in the On-Season With ‘Heaven’s EP’ Video He’s having the least fun Vegas trip ever.
obits 9:41 a.m.
Willie Garson, Sex and the City and White Collar Star, Dead at 57 He had been suffering from pancreatic cancer.
overnights 6:00 a.m.
The Circle Recap: The Winding Road Toward Finale Night As we head into the finale with the final five, The Circle loves to keep players in a state of overwhelming paranoia, and for that, we thank her!
fact vs fiction Yesterday at 11:30 p.m.
Fact-checking Impeachment Episode Three, ‘Not To Be Believed’ An expert analysis of everything from Matt Drudge’s dumpster diving to how Paula Jones really felt about that $700,000 settlement offer.
overnights Yesterday at 11:23 p.m.
Impeachment: American Crime Story Recap: Once More To the Diet Coke Room The bigger a character Bill becomes on the show, the meaner it seems each time the camera boomerangs to Linda’s TV dinners.
More Stories