The only character worth caring about on House of Cards is guinea pig Cashew — who almost lost his life in season two due to a devastating squish threat. And with Gavin playing a huge part in season three, we knew Cashew had to appear. How could this dude be running around playing hacker, playing double-crosser, and playing faux-drug-addict without the help of his guinea pig BFF? Turns out the two aren’t as close as we thought, because Cashew’s season-three cameo comes at the end of episode ten — where, before he ditches the U.S., Gavin drops poor Cashew off at Lisa’s house. Somewhere in this mess, she’s agreed to babysit. Just kidding! Here you go, Lisa! Enjoy Gavin’s living, breathing baggage. Sorry about the whole lying thing:

It gets worse when you hear the audio. (Is he crying?) Poor, sad Cashew: 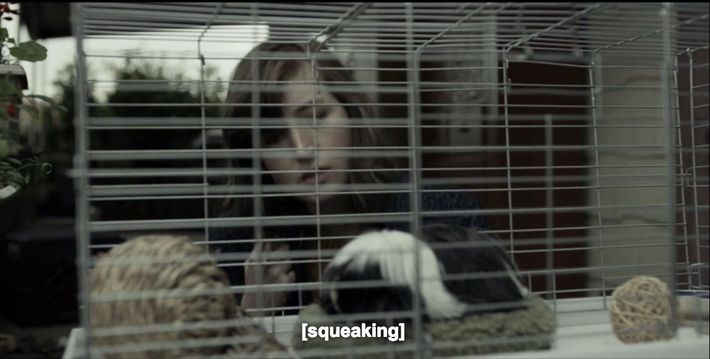 Worth asking: Is this the Cashew? (Here is last season’s Cashew, for comparison.) It’s not some guinea pig Gavin gifts to Lisa as an apology for lying to her about being a drug addict (and conning her into revealing the whereabouts of poor Rachel), right? Right. That wouldn’t make sense. Or would it?! It wouldn’t. It’s nice to know that, despite everyone else’s ultimate House of Cards–ian downfall, Cashew has found a new, presumably loving home. (He’ll get over the traumatic move soon enough. Squeak.)

We don’t like to leave any hanging chads, even if they’re guinea pigs. We all missed Cashew as much as you did. We ask ourselves every question, from the big to the minute, and one of the questions was: If Gavin [Jimmi Simpson] is skipping out of the country, what happens to Cashew? And I think that we not only get that superficial pleasure of seeing Cashew for a moment, but it’s a real character moment too. The fact Gavin would even think to leave Cashew with someone who would take care of him says something about his character.

+Comments Leave a Comment
House of Cards: The (Brief!) Return of Cashew