From The Feminine Mystique to Rosemary’s Baby, from Portnoy’s Complaint to The Penny Wars, the creators of Mad Men have squeezed in references to some of the most celebrated literature of the 20th century. On Sunday night’s premiere, we get our first reference when Don and Roger are served by a diner waitress with a copy of John Dos Passos’s U.S.A. trilogy, published in the 1930s, tucked into her apron pocket. (“Do you have anything by John Dos Passos?” Roger teases her.) Billy Parrott, managing librarian of the art and picture collections at the Mid-Manhattan Library, has been chronicling the meanings behind some of Mad Men’s most iconic literary references on his blog for the New York Public Library, The Mad Men Reading List, over the past five years. On the U.S.A. reference, Parrott noted, “It’s that time period where things change. It was the end of innocence [for] that particular generation.” Like the song that bookends this episode, the trilogy is a perfect fit for Mad Men’s themes, and as Matt Zoller Seitz points out, an acknowledged influence on the show.

Parrott took Vulture through some of the best literary references on the show so far, and what he predicts we might see this season.

“I like the ones where instead of just showing them reading, the actual books make their way into the show. They did that with Frank O’Hara’s Meditations in an Emergency [in season two]. Some of those poems were the dialogue, voice-overs, or closing credits of some of the scenes.”

“They also did it for the beginning of season six, where Don is reading Dante’s Inferno. There’s a voice-over, the first opening sentences of the book, which really relate to the show. When they incorporate the text into the show, it’s so spot-on.”

Midway upon the journey of our life
I found myself within a forest dark,
For the straightforward pathway had been lost. 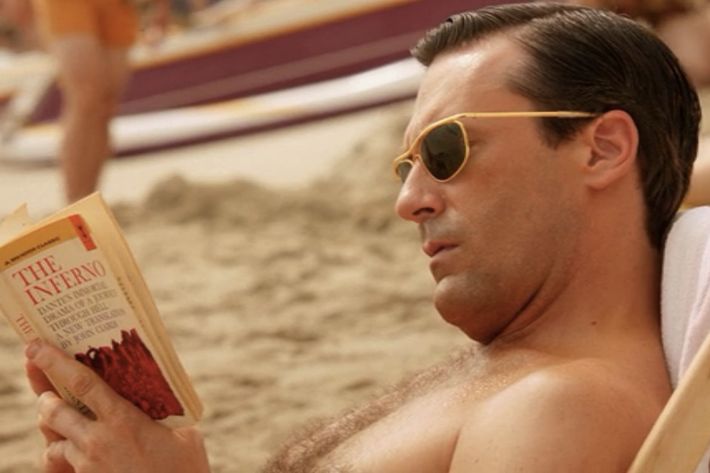 “The other one is a little quirkier. There are two different books. Betty Draper is reading “The Diamond As Big As the Ritz,” a short story by F. Scott Fitzgerald.”

“A little later in the season, Sally is reading The Twenty-One Balloons, the children’s book that came out in the ‘40s. Seeing the show, unless you really know what that book looks like, you only get a quick glimpse of it. You get more of a glimpse of the inside of the book. I went for months not knowing what that book was, and eventually reached out to a NYPL colleague, a children’s librarian, who has an amazing blog. She put it out and said, ‘Hey, children’s librarians everywhere, do you recognize this?’ And within two minutes, people were like, ‘Oh yeah, that’s The Twenty-One Balloons.’ Even better, though, is that when The Twenty-One Balloons came out, William Pène du Bois wrote the book and gave it to his editor and said, ‘Have you read “The Diamond As Big As the Ritz”? It’s the exact same story. You’ll be accused of plagiarism.’ If you read it, there’s an introduction where he says, ‘Yes, there are coincidences, but they’re just a coincidence.’ I think it’s funny that the mom is reading one book and the daughter is reading another, and they’re not the same book, but very close.”

“[Then there are books] that appear because they were popular at the time. Books like Lady Chatterley’s Lover [season one] always have those kinds of followings. If Mad Men came out today, the same characters would be reading and giggling and pointing at words in Fifty Shades of Grey. Every generation, there are those kinds of books. That particular one, they wouldn’t be standing around giggling over Rebecca of Sunnybrook Farm. The subject matter, that’s something that just had everybody talking.”

What might be popular this season of Mad Men?

“Maybe somebody will be reading one of the best-sellers from around that time, The Godfather by Mario Puzo. Would that add anything to any particular character or character development? Probably not. But Pete might read that book.”

Matthew Weiner will appear at “LIVE From the NYPL” on May 20 to discuss Mad Men’s series finale.

snow jams 4 mins ago
The 50 Best Original Christmas Songs Since ‘All I Want for Christmas Is You’ Queen of Christmas, meet your disciples.
last night on late night Yesterday at 11:25 p.m.
John Mellencamp Has No Interest in Doing a Super Bowl Halftime Show He said so on WWHL.
chat room Yesterday at 10:05 p.m.
Leo Woodall Needed Some Time to Digest That White Lotus Reveal “I’d been told I might have a rumble and tumble with a couple of characters, but I didn’t know who.”
overnights Yesterday at 10:03 p.m.
The White Lotus Recap: Whoopsie As family secrets are being kept and revealed back at the resort, a new one is brewing in Palermo.
whodunnit? Yesterday at 10:03 p.m.
The White Lotus Kill or Be Killed Report: Two Can Keep a Secret Well, a couple of names just shot to the top of the suspect/victim list.
overnights Yesterday at 9:15 p.m.
Yellowstone Recap: As Good As Gone The dynamic between Jamie and Beth changes for the first time … ever?
overnights Yesterday at 9:00 p.m.
Dangerous Liaisons Recap: The Sex Dungeon The growing bromance between Camille and Valmont is delightful.
theater review Yesterday at 8:49 p.m.
KPOP Offers a Not-Actually-All-Access Pass A musical about making it big feels neutered by its own backstage process.
justice for booster gold Yesterday at 6:25 p.m.
James Gunn Wants All the DC Movies, TV, and Games ‘Connected’ He and Peter Safran have big plans for the DCU.
coming soon Yesterday at 5:50 p.m.
Helen Mirren Will Travel to 1923 for Yellowstone Prequel A new trailer dropped showing off Mirren and Harrison Ford smoldering at each other.
fancasts Yesterday at 5:40 p.m.
Hey, Antonio Banderas Knows a ‘Fun’ Guy Who Could Play Zorro If he was asked to do a third movie, he would want to pass the mask to this former co-star.
goth girls Yesterday at 4:22 p.m.
Jenna Ortega Didn’t Want to Copy Christina Ricci’s Wednesday According to Ortega, she and her co-star never even said the word Wednesday to each other on set.
performance art? Yesterday at 2:51 p.m.
The 1975’s Matty Healy Is Doing a Lot on Tour From kissing fans to eating raw meat onstage, here’s a roundup of what he’s been up to.
commit to the bit Yesterday at 1:09 p.m.
Martin Scorsese Is in on the Tumblr Memes He has confirmed that he made the nonexistent 1973 film Goncharov.
fame Nov. 26, 2022
Questlove, John Leguizamo, Jennifer Beals, and More Mourn Irene Cara Remembrances poured out across the industry.
charges Nov. 26, 2022
Squid Game’s O Yeong-su Indicted for Sexual Misconduct O claims he merely held a woman’s hand to guide her around a lake.
obits Nov. 26, 2022
‘Fame’ Singer Irene Cara Dead at 63 The multihyphenate sang two Oscar-winning title songs.
overnights Nov. 26, 2022
RuPaul’s Drag Race U.K. Season-Finale Recap: Megamixed Up Drag Race is dancing on the thin line between reality-TV ritual and reality-TV tedium.
oh deer Nov. 26, 2022
Please, Was the Original Bambi Not Horrifying Enough? The guy behind the Winnie-the-Pooh slasher is now working on a Bambi horror movie.
talking about it Nov. 25, 2022
Kim Petras Defends Her Concert Chat With Barbie Ferreira The pair were filmed catching up during a Rina Sawayama performance.
More Stories