Kathie Durst (left) and Robert Durst. Robert was suspected of murdering his wife, Kathie, who disappeared in 1982. Photo: HBO

HBO six-part documentary series “The Jinx: The Life and Deaths of Robert Durst” is an investigation into a scion of one of Manhattan’s wealthiest real-estate fortunes who may or may not have gotten away with at least two different, elaborate, sensationalistic murders. The Jinx is Serial in 3-D, but Robert Durst is the anti–Adnan Syed: Durst walks, more than once. Filmmaker Andrew Jarecki examines evidence going back to the 1980s to look at how, why, and whether this defendant is either guilty and very fortunate, or innocent and, as per the series’ tagline, merely “The Unluckiest Man In The World.”

The series finale of The Jinx, entitled “What the Hell Did I Do?,” had a lot to live up to. On Sunday, hours before the episode aired, news broke that Durst had been arrested in New Orleans on charges of first-degree murder in the death of his once best friend Susan Berman. By the end of this tense, revealing, and unbelievable hour, there was no question why.

The episode begins with Jarecki wrangling one last interview with Durst. After a number of back-and-forths and broken meetings, Durst tells Jarecki the truth: “I’m at the point of not doing anything, period.” And he hangs up the phone. This is the wisest choice he could have made. It is astonishing, in fact, that he ever participated in this series. When Durst was on the lam, he got caught and shipped back to jail in Texas because he shoplifted a sandwich, even though he had plenty of cash. His participation in The Jinx seems to follow the same strange, self-defeating pattern. If he had not volunteered to participate, it’s possible the documentary would never have been made, and the new evidence would never have come to light.

Back in the real world, Durst did finally agree to sit down with Jarecki, and by the end, he unwittingly acknowledged on tape that he had “killed them all.” Durst reaches his breaking point all due to one incriminating piece of evidence: his own handwriting.

We learned in episode three, “The Gangster’s Daughter,” Berman was shot in her home in Beverly Hills in the back of the head. “There was no sign of any kind of forced entry,” the cops said. “Whoever killed her had probably been let in by Susan Berman.”

Someone, presumably Berman’s killer, sent the cops an anonymous letter alerting them to the presence of a “cadaver” at Berman’s home addressed to the “Beverley Hills Police Department,” with “Beverly” misspelled. As we discovered last week in episode  five — in tandem, apparently, with the LAPD—  Durst’s distinctively blocky handwriting was strikingly similar to the writing on the cadaver note. The most damning proof of this: In a letter addressed from Durst to Berman, found among her possessions, “Beverley” was written with the same misspelling. 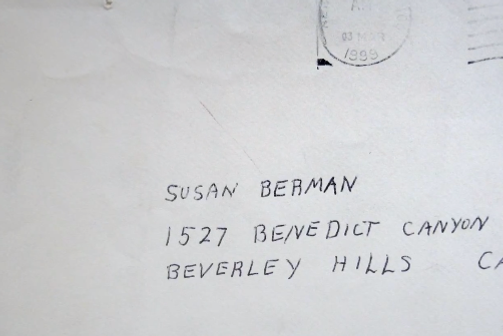 Durst was in California and unaccounted for at the time of Berman’s death. He flew home from San Francisco immediately thereafter.

Back in real time, Jarecki shows the incriminating handwriting evidence to Westchester DA Jeanine Pirro, who mutters “Jesus” and, later, “son of a bitch.” Durst’s attorney, more restrained, says only, “I see similarities and I see differences.” Lawyers, am I right? 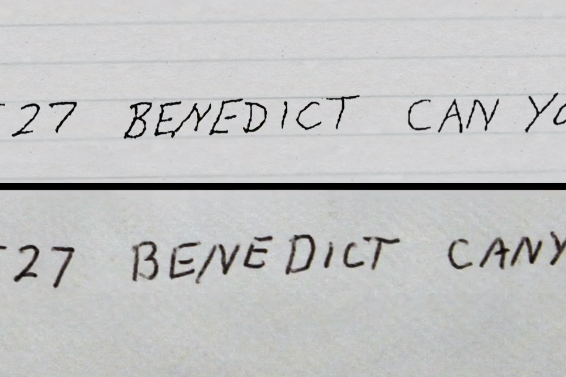 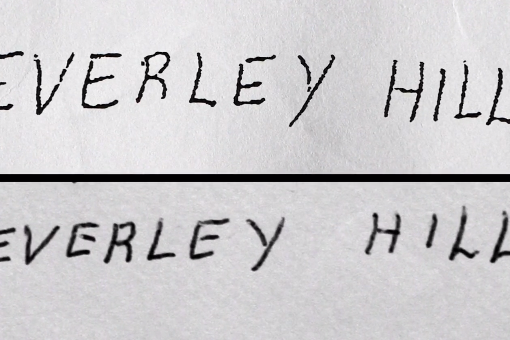 A forensic examiner looks at the materials under a microscope and is interested, but says he needs to see more. The filmmaking team dutifully digs up a lease application completed by Durst. Presented with an abundance of letters, numerals, and computer screens to play with, the examiner declares the resemblance to be “bang on. … Characteristics are unique to one person and only one person.”

At this point, we get a rare view into the behind-the-scenes deliberation over how to best confront Durst about the note. Jarecki reflects that, up until now, he has given Durst “the benefit of the doubt,” and that he even likes him. Going into the second interview, he says he cannot “be any different, and yet my feelings about it are completely different. … I wasn’t sure that Bob was guilty, and that’s a big, big change.”

It’s here that Durst begins dodging a meeting with Jarecki. He leaves on a trip, purportedly for Madrid. The three filmmakers argue about whether they can believe Durst is where he says he is; Jarecki, of the three, maintains that Durst is trustworthy. “Are you fucking kidding me?” says the cameraman, speaking for many of us watching at home. Of course, the team discovers that Durst is not even in Spain. He’s in Los Angeles. He makes dates to speak with Jarecki and cancels them. It looks like the final interview may never happen.

Remember Sargeant Cody Cazalas? He told you hours and hours of footage ago: This man cannot be trusted.

The team gets word that Durst was arrested in New York. Video footage shows Durst approaching his brother Douglas’s Manhattan townhouse, which is against the rules of an official “order of protection,” even though he never even makes it to the door. He is released on $5,000 bail, and his defense team needs Jarecki’s footage from when they first shot Durst outside the house for their case. Leverage!

Now Durst is talking to Jarecki again and being cordial: “I am ready to be filmed, if you’re still interested in doing that.” The teams prepares for the final interview, plots strategy, acknowledging that Durst is “a smart fucker.” At least they’re no longer underestimating him.

On the morning of the final interview, Jarecki admits to being nervous. “For years I’ve been saying to people, ‘I’m not afraid of him.’”  But now the full weight of what he’s about to do upon him: confronting a man he believes to be a murderer.

Jarecki shows Durst his evidence. Durst seems unperturbed. “The writing looks similar and the spelling is the same, so I could see the conclusion the cops would draw. … Definitely wrote this but I definitely did not write that.” He sounds neither angry nor defensive, just tired. He looks  tired, too, like he is overdue for an appointment with his plastic surgeon.

Jarecki presses him gently to no avail. He shows him the image of the two envelopes one next to the other and asks, “Can you show me which one you didn’t write?” Durst looks and looks, searching for an answer. At last, he says, “No.”

The interview ends here, but the cameras keep rolling as Durst heads to the bathroom without taking off his mike. Just as he did once before when he was miked, he continues talking to himself out loud in the bathroom. He tells himself, still sounding calm, “You’re caught. What a disaster. … What the hell did I do?” And then, at last, without emotion, “Killed them all, of course.”

That popping sound you hear is Jeanine Pirro, somewhere, opening a bottle of Champagne, and Kathie’s friends and family finally getting the closure they’ve been in search of for decades.

The filmmakers give Durst the courtesy of the last word.