Actress Amber Tamblyn’snewest book of poetry, a collection called Dark Sparkler, is out this week, and mostly centers around dead or otherwise fabled Hollywood starlets. There is one who committed suicide by breathing carbon monoxide in her garage, one who jumped to her death off the “H” in the Hollywood sign, one who was strangled by her jealous ex-boyfriend in the driveway of their home. You’ll already know the stories of some (Dana Plato, Jayne Mansfield, Brittany Murphy), but others (Dominique Dunne, Frances Farmer, Heather O’Rourke) will send you down a dark Wikipedia spiral through Hollywood’s most tragic demises. There’s one living soul included in Tamblyn’s collection: Lindsay Lohan. Vulture got the exclusive to excerpt the poem, then spoke to Tamblyn about what it meant to her and what it was like writing this book. 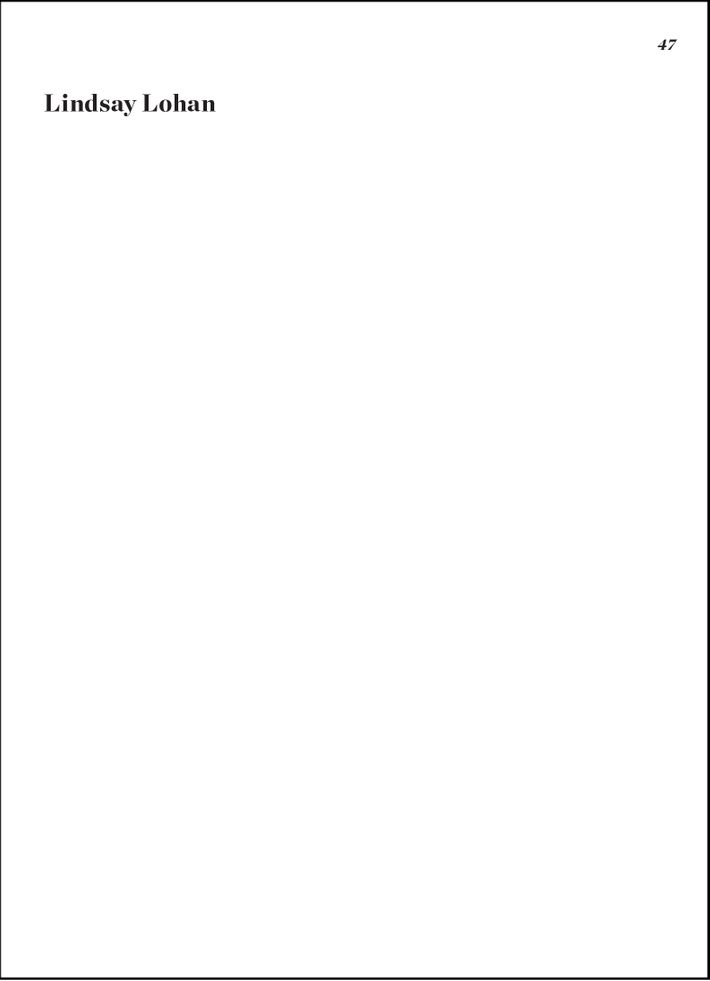 You are going to get a lot of questions about the Lindsay Lohan poem — or the lack of poem.
Well, tell me what do you take away from it? I am curious.

Even if you don’t know the context of the book, just to have her name on a blank page, essentially, is very distressing.
So it distresses you?

To have her name on the top of a blank page is saying something.
It is so different for every single person that I have talked to, which is kind of the point I was trying to make about treating people like objects and how we, as a society and a culture, project our feelings onto other people. This is certainly the case with celebrities. We feel we have every right to do that.

I read it out loud once, that page in the context with a couple of pieces, and everybody laughed, and it was so upsetting for me that I told myself I would never do it again. I did not think people were going to laugh. I thought it would really strike a chord, but I know that is also how people process things when they are uncomfortable.

She is still the butt of the joke.
For me, I did not put that in there to say, “You’re next.” I put that in there to say, “I am not going to do you what everyone else does,” which is write a poem about your life — which is not my life. I am not going to project onto your story. I am giving this back to you to write. This belongs to you. Your poem has not been written yet, and it belongs to you. It’s less a statement that she deserves to be grouped in with a bunch of dead women and more of a statement of she deserves to be in there because she is treated like those dead women already; she is treated like she is already dead. Everyone has their own take or different feeling about it.

People are going to read it however they want.
The difference for me is how we perceive people and what we think about them, as opposed to what it felt like to be them. To write about and to talk about what it actually feels like — and that is not to say you should sympathize — you should empathize with your fellow women, because at the end of the day, every woman I know is an idol. Every woman I know on any given day is like, “I am a fucking boss. I’m amazing today. They are staring at me; they want to take my picture.” There is that feeling, right? And at the end of the day, that comes and goes depending on how people treat you, and it can be a very painful element. With these women, their lives are searchable. You can find anything you want.

You really sent me down a dark Wikipedia spiral with these poems. Were you aimlessly clicking around, finding connections between them?
Once I sold [the collection] to HarperCollins, I had washed my hands of it. My editor said, “I really want to read about your experience writing these poems,” and I had already felt definitively that I had inserted myself enough in the book, and what an even more actor thing to do — what an even more narcissistic thing to do to go like, “You know, it is not just about their pain, it’s about my pain.” He said, “That is the most important thing, because you are writing about the internal lives of these dead women and you’re not letting us into your own internal life of how it felt to be writing them.” I couldn’t really fight him. I just truthfully did not want to have to go back over all the old emails. I just didn’t want to have to relive it, but I knew I had to.

Yeah.
It sent chills through me when I read an interview with Shannon Michelle Wilsey. I knew the same ones you do. Like Dana Plato —  I remember her. I just remembered off the top of my head the pretty straightforward ones, and then I would have to start Googling actors that died before their time, and before I knew it, so many were popping up.

It’s like E! True Hollywood Story in here — like the actress who jumped off the “H” in the Hollywood sign. It’s almost like an urban legend, but then you are Googling it and are like, Shit, this is actually what happened to someone.
I had read that she went to a party at her uncle’s house and everything seemed totally fine, and then she walked out the front door and just walked up the hill and jumped off the “H.” Like, there seems to be no reason, there is nothing leading up to it, she was not in and out of the hospital, so in that sense, I thought, Oh, it would be interesting to write from the perspective of her shoes … Like talking her into doing this.

In the book, you go from women who lived a long time ago to someone like Brittany Murphy, who died pretty recently.
[That] was the very first poem that was written, and she was the only one that was my contemporary. Someone whom I didn’t know personally, but we auditioned together all the time. The only time I ever saw her in person was her coming out of the audition room for 8 Mile, and I went in right after her. That is the only time I ever saw her in my whole life, but in that sense, she knew names I knew; she was a contemporary. I had friends that dated her, like there was just sort of six degrees [of separation] around it. It was the same with Heath Ledger, but it is a very different experience for a man in the business than it is for a woman. She was the only woman who was a peer, and we were maybe only about four years apart or something.

I’m sure that it’s not that fun to be Googling dead women and trying to think of their mindset.
No, it became obsessive. I thought it was going to be simple, and I thought I would sort of put myself in it a little bit. I didn’t realize how deep and how far it would go, and how complicated it would be along the six years it took to write it.

Do you relate to these women?
I sort of related to them, but I also did what we all do. Whether you are a celebrity or not, you project your own feelings onto all of them. Projected my own truths according to what I go through in my life, regardless of what I do for a living. There are poems in there that are also about fake actresses, and that was my way of injecting my own voice and being able to create personas of me, and put it within the context of these women. That was about as close to their reality as I could come, which is just imagining, something we all do.

chat room 29 mins ago
Dan Nigro, Music’s Gen-Z Whisperer, Is Just Trying Not to Step on Toes The producer on what he looks for in new artists, working with Olivia Rodrigo, and being Conan Gray’s “glorified editor.”
remembrance 8:14 a.m.
Remembering Sam Gilliam of the Astral Plane His draped paintings took the form to its outer limits.
overnights 8:00 a.m.
Only Murders in the Building Recap: Affairs to Remember The core trio is as dynamite as ever, but the new additions are more of a mixed bag.
overnights 6:00 a.m.
Only Murders in the Building Season-Premiere Recap: A Whole New Direction The Only Murders crew will have to clear their names if they want to reap the rewards of renewed relevance and newfound notoriety.
everybody loves puppets! 1:45 a.m.
Jim Henson’s Creature Shop Will Puppetize My Neighbor Totoro For a Royal Shakespeare Company stage adaptation of the Hayao Miyazaki film.
my single is dropping Yesterday at 10:37 p.m.
Don’t Expect a Music Video for Cardi B’s Collab With Ye and Lil Durk “I just don’t feel like doing too much this time around because I’m just exhausted with everybody.”
overnights Yesterday at 10:00 p.m.
Irma Vep Recap: Too Many Ghosts Mira feels dangerously adrift as René places the burden of carrying the series on her.
celebrity response Yesterday at 7:50 p.m.
Celebrities Respond to the Supreme Court’s Overturning of Roe v. Wade Celebrities including Viola Davis, Taylor Swift, and Michelle Obama respond to the Supreme Court’s decision.
overnights Yesterday at 7:28 p.m.
The Bear Recap: Say Matte! Exploding toilets, bad breakers, and parking lot coke deals knock The Original Beef gang down but not out.
mental health Yesterday at 6:42 p.m.
Machine Gun Kelly Got Sober for Megan Fox and His Daughter “I was like, ‘I need to kick the drugs for real this time,’” he says in his new documentary.
emmy insider Yesterday at 6:30 p.m.
‘What Will I Do Without That Guy?’ As the end of Better Call Saul approaches, Giancarlo Esposito wants more time with Gus Fring.
the festival circuit Yesterday at 5:23 p.m.
Lorde, Clairo, and Arlo Parks All Got ‘Stoned at the Nail Salon’ A very brief appreciation of Lorde’s “Stoned at the Nail Salon (Glastonbury Version).”
waystar royco Yesterday at 4:52 p.m.
Has Succession Season 4 Started Production? Uh-huh. It’s filming in New York City.
if i can stream Yesterday at 4:37 p.m.
The New Elvis Channel Will Have Fans All Shook Up Sadly, Lilo & Stitch isn’t part of the free Presley programming.
vulture lists Yesterday at 4:00 p.m.
Every Tom Hanks Movie, Ranked Where does Elvis fall in the Tom Hanks canon?
power Yesterday at 3:50 p.m.
Everything to Know About the WNBA Star in Russian Custody After her months in detention, Brittney Griner’s trial will begin on July 1.
trust fund vigilantes Yesterday at 3:32 p.m.
Christian Bale Has His Batsuit on Standby Christian Bale promised to return as Batman if Christopher Nolan calls.
depply untrue Yesterday at 3:20 p.m.
Jack Sparrow Isn’t Coming Back for Pirates Under oath, Sparrow is no more (at least onscreen).
the festival circuit Yesterday at 3:00 p.m.
A Wellies-Free Review of Glastonbury 2022 When you can’t go to England’s biggest festival in person, you dance at home alone to Yves Tumor and order Goan fish curry for delivery.
mushroom court Yesterday at 2:54 p.m.
Vic Mensa Pleads Guilty to Possession of ’Shrooms, Sort Of Let the fun guy have his fungi.
More Stories