A tall, bearded man and a shorter, jet-haired woman stand motionless shoulder-to-shoulder in a forest clearing. A hunting rifle is slung across the woman’s shoulder. The sun sets in front of them, casting deep shadows on the surrounding leaves, tinting them turquoise-blue. A solemn caption at their feet reads, “My war was begun.” So ends the first issue of Brian Wood and Andrea Mutti’s Rebels, a new ten-issue series from Dark Horse Comics that tells the story of the American Revolution through the eyes of Seth Abbott, a founding member of the Green Mountain Boys militia. This isn’t Wood’s first foray into historical fiction; in 2008, he penned Northlanders, which chronicles the efforts of an exiled Viking prince to claim his inheritance. In Rebels, Wood focuses on the politics behind the war and the roiling discontent of the British colonists that eventually boiled over into eight years of bloody conflict.

He’s found an enthusiastic partner in illustrator Andrea Mutti, whose work appears in Star Wars and Conan the Barbarian, and who was equally inspired by the drastic social change of the Revolutionary War period and the grit and determination of its people. Together the two have produced a historical drama that’s straightforward and easy to follow, but that doesn’t shy away from exploring stickier issues like class divides, the role of women in the colonies, and the complex distinction between friend and foe. We talked to both Wood and Mutti about their work on Rebels and what readers should expect from the series.

How did you get the idea for Rebels?
Brian Wood: There are two aspects to this: The first is that I really enjoy reading and writing historical fiction. The second is that I was born and raised in Vermont, and this history is my local history. So in a way, I always had this idea somewhere in the back of my head, ever since I was a kid playing in the woods behind my house, pretending to be a soldier or looking for arrowheads.

You’re talking about pretty politicized events here. How do you make a theme like that accessible?
BW: I try to be very simple in presentation. I feel that accessibility for the audience is key — I want them to buy into the story and to relate in some basic ways. As we go, I dig a little deeper, but I never get soapbox-y in communicating the message. I love nuance, and I often leave things just a little open at the end of the story to allow for interpretation and for readers with differing ideologies to not feel alienated.

What was your collaboration like?
Andrea Mutti: It’s not the first time I’ve worked with Brian, and frankly speaking, it’s like working with a brother. We have a very similar vision about the work, and of course we share the same passion for that period. Brian is open to my ideas, and I’m open to his — that’s how brotherhoods work. 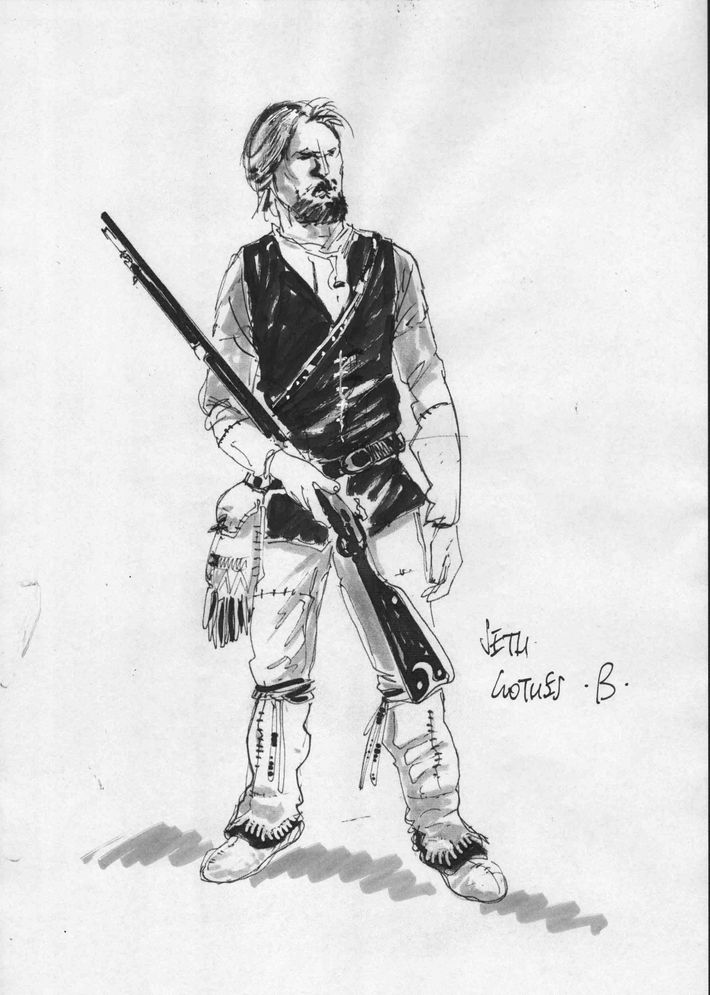 How did you come up with a character like Seth?
BW: Seth is part me in that he’s a kid raised in the woods of Vermont who’s taught to hunt and hike and do chores by a gruff but ultimately understanding father. He’s also something of an everyman because he stands in for the average citizen who suffered under British rule. At the start of the story, his suffering is local, and by the end, he’s joined the Continental Army, so we follow him from his first brush with revolution all the way to the end.

AM: Seth has something really wild inside; he’s a real son of the forest.

Given that this is historical fiction, where did you look for visual references?
AM: Before even beginning the pages, I had time to dive into documents: books, movies, TV shows, and websites. I have a real passion for that period, and the documentation is one of the most interesting parts of this job — it’s a journey within the journey. I also received a lot of references from Brian. At the same time, I visited some factories here in Italy that make historical weapons and clothes, and I bought a musket, a couple historical pistols, and some tricornered hats to get a feel for the material, the texture and the weight.

How much historical research did you do for the writing?
BW: I read a lot of books — that’s honestly pretty much it. I’m good as skimming and absorbing information quickly, so preparing for this series meant about two months of reading. Because I’m somewhat local to the areas depicted in Rebels, I took a couple weekend trips to Valley Forge and Fort Ticonderoga. But, again, I grew up hearing about this history, learning it in grade school, and going on field trips, so a lot of it was there already, tucked away in the back of my head. 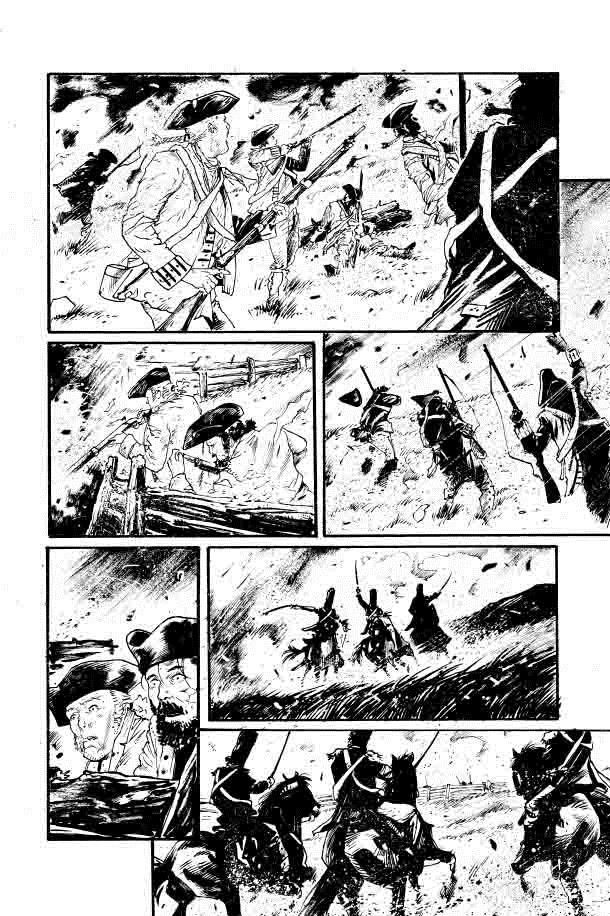 What specific stylistic choices did you make when illustrating Rebels?
AM: I have a realistic approach for most of my work. With Rebels, my intention was to have a fresh, light touch, and to keep everything fluid and realistic. That time is gritty, dark, and rough, so the idea was not to include too much softness. I also wanted to keep the visuals close to the atmosphere of the period — life was hard, nature was hard, and people lived with daily fatigue.

Why do you think people should be interested in the Green Mountain Boys?
BW: When I came across the phrase “America’s first militia” in reference to them, I thought that was perfect. The meaning and perception of militia has changed so much over the years, so it was a fantastic opportunity to play on that language and that history. In recent times, history has been co-opted for political gain or turned into glossy, idealized folktales. I wanted to show this history in an honest way from the point of view of common people. We’ve heard Washington and John Adams and Ben Franklin’s story enough times. What about the redcoat soldier, the seamstress, or the African-Americans of the time?

How would you describe the relationship between Seth and his wife Mercy?
BW: They get married young, which wasn’t unusual at the time, but it was a snap decision, and it comes during this time of upheaval. Almost immediately Seth is called off to fight, and Mercy, a girl of 16, is left alone to mind the house and wait for news. Her story is tragic in that sense, and it’s a counterpoint to the more idealized stories of stay-at-home women of the time. I was thinking of Ma Ingalls while I wrote some of the Mercy scenes because although I’m sure her life was terribly hard, there was, in the writing, a sense of satisfaction in things getting done and happiness in the work. I didn’t want that for Mercy. I didn’t want to imply that she was cheerily passing the time while Seth was away.

Aside from the upcoming election season, how are the issues in Rebels tied to current events?
BW: The most immediate example that comes to mind is the way it deals with the Second Amendment; it’s no coincidence I named the first story “A Well-Regulated Militia.” And later in the series, I hit on other themes that still resonate and make headlines now, from how veterans are treated to class divides related to the draft to the duty of the press during times of conflict. 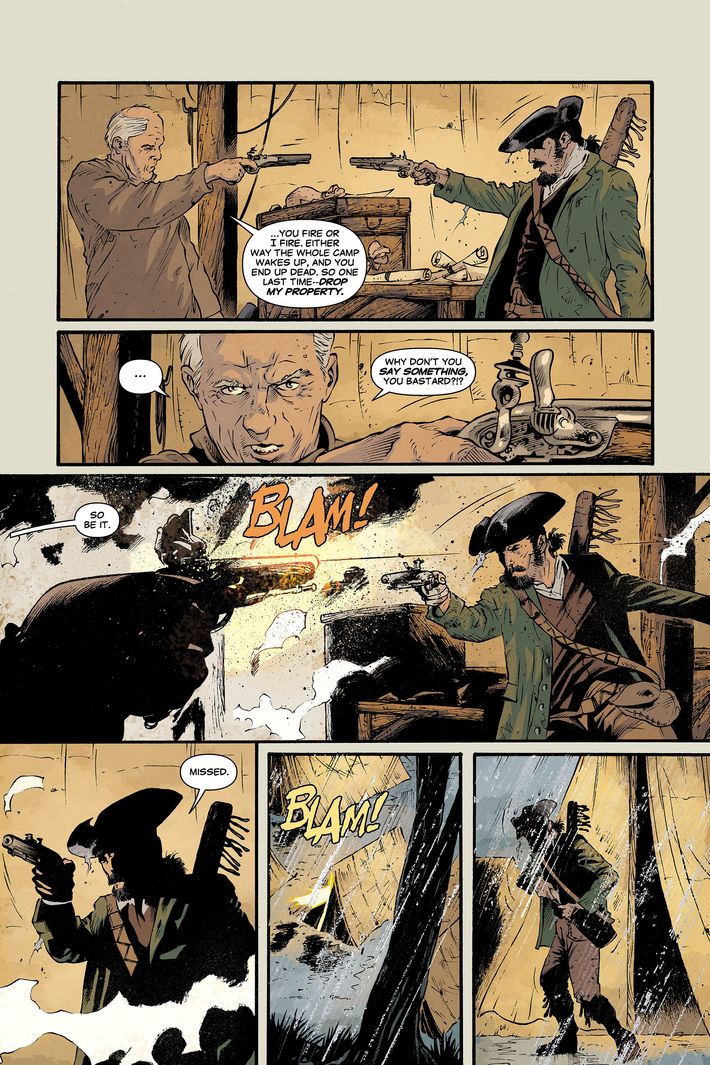 Do your political views manifest themselves in the series?
BW: I’m pretty far left on the political spectrum, but I don’t think you would necessarily know that by reading this book. I’m a lefty who’s also a proud patriot writing a book about American militiamen and freedom from tyranny. I’m walking about a million fine lines here.

What’s your favorite thing about the series?
AM: One of the great things is that in each issue, there’s a different point of view; it’s like a choral vision of all events. We have flashbacks when our heroes are younger, we see the different seasons of life, and we can feel the time moving.

What were the most difficult and most rewarding parts of writing Rebels?
BW: The difficult part is always the research and finding that connective story tissue between the then and the now. But when you find it and it clicks into place and works, that’s also the most satisfying part.