This week’s episode of CSI: Cyber is called “The Evil Twin.” That’s a fine name, but as we’ll see later, it could have just as easily been titled “The Poop Phone.” But we’re getting ahead of ourselves.

A hotel in New York City believes that their network’s been hacked. To make matters worse, it’s a hotel adjacent to the U.N., so a lot of foreign dignitaries are at risk. “We could be looking at a ‘dark hotel’ scenario,” explains Agent Mundo. Well, he doesn’t really explain anything — “Dark Hotel” just sounds spooky.

So the team heads to New York, the city that never sleeps. At the Kirkendahl Hotel, Agent Ryan says that guests could be hacked through malware posing as legit software updates. For instance, this update to Treble Flash Play, being installed on a computer that appears to be running Microsoft Bob: 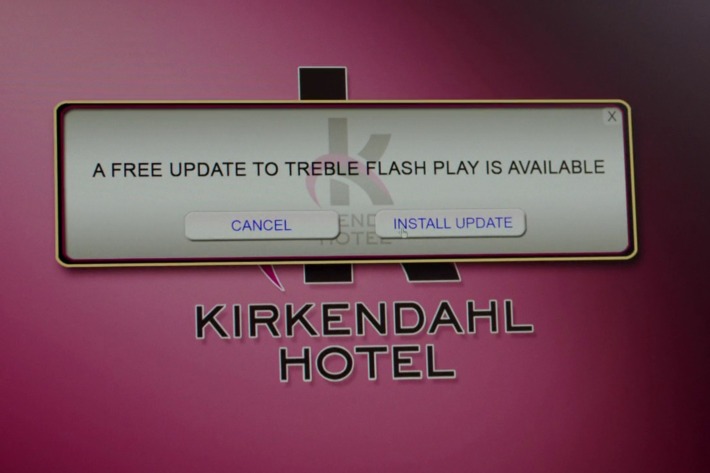 This is how hotel viruses work:

The hotel’s lawyer is worried because many of their guests use aliases, such as these: It makes no sense. These are obviously the names of famous cartoon characters! (From the 1950s and ’60s, but that’s a whole ‘nother can of worms.) They might as well just make a reservation under John Q. Fakename, who lives at 123 Fake Street.

The situation gets worse when they discover that the security footage has been wiped. Also important is that Adele Foster, one of the guests, has been murdered.

Investigators recover the victim’s cell phone in the plumbing, indicating that the killer tried to destroy her phone. The show reenacts this, inadvertently giving us CSI: Cyber in microcosm.

That’s it. That’s the whole show. CSI: Cyber: Smash your phone and throw it in the toilet because technology is bad.

According to hotel records, Foster somehow kept ordering room service even after she died. The plot thickens.

This week’s word of the week is hospitality hack. In past weeks, the show has seen fit to poorly define actual hacking terminology. Now it’s just making up terms. 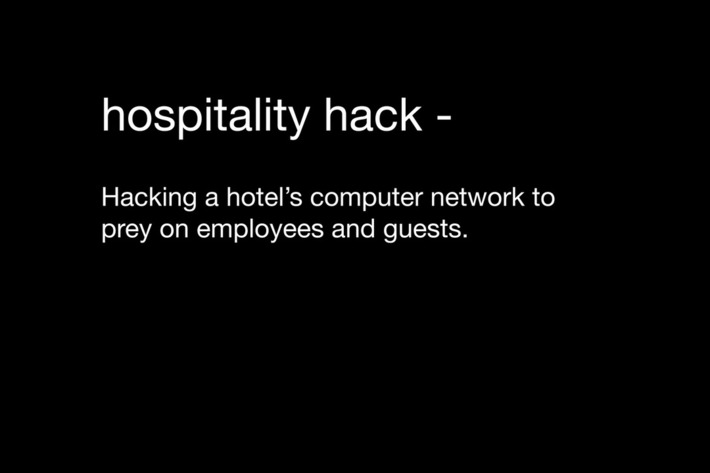 It turns out the hackers used a virus embedded in a fake party email to hack the network, which finally gives Sifter an excuse to deliver this soliloquy that’s clearly been in his back pocket for a while.

“Y’know, it was the Trojans themselves that opened up the city gates and pulled the horse inside. Just like the hotel employees, who opened a party invitation and let in the malware. While they blindly celebrated victory, their enemy lay in wait. And Troy fell.” 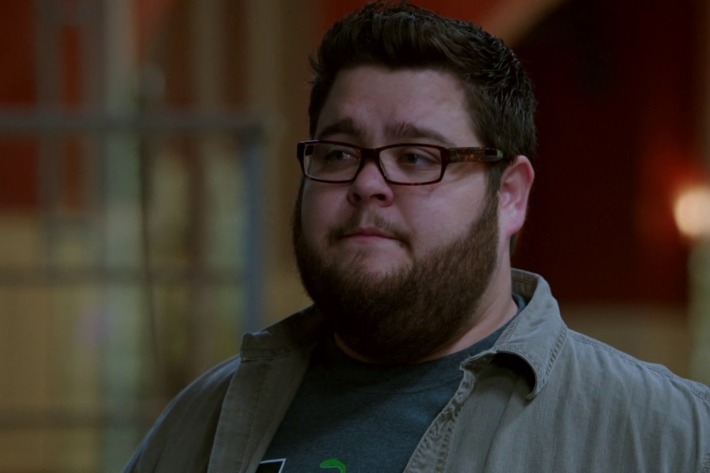 Nelson’s not so sure.

Ramirez, Krumitz, and Nelson explain how everything in the hotel room was controlled via a central computer. They demonstrate by hacking the TV, thermostat, and remote-controlled curtains. “Nelson, are you really doing that?” asks Ryan. “Did you actually hack this hotel?”

Krumitz tells Nelson to investigate the phone that got flushed down the toilet. Nelson accurately refers to this as “The Poop Phone.” He also smells it, as any good detective might.

The team eventually tracks down a suspect, Evan, whose cell-phone data appears to place him at the scene of the crime. That data includes some very unsexy sexts. Time for a montage! Nelson cleans off the poop phone!

The team runs through a number of hypothetical methods for planting fake info on someone’s cell phone. Maybe Evan got tricked into going to yougethacked.com. 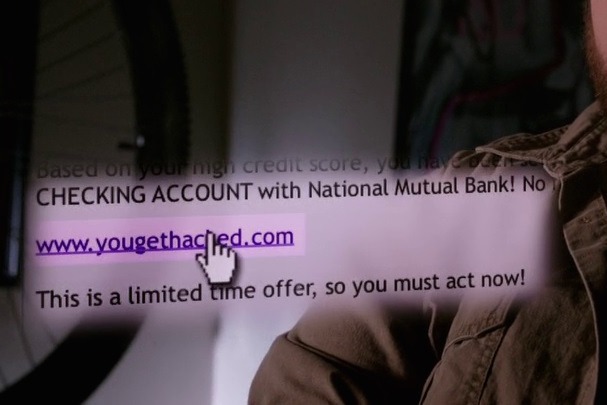 Maybe they hacked Evan at a coffee shop by using an “evil twin” router. Here is Nelson’s hacker face. It turns out the real culprit is the victim’s abusive boyfriend. He puts on his best murder face and goes to kill Evan. 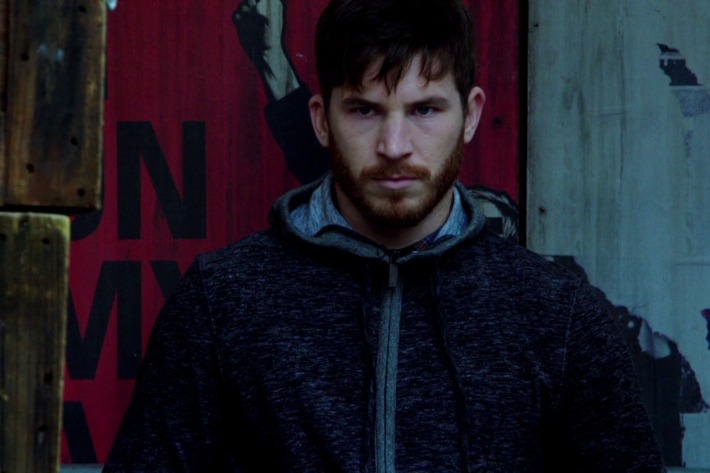 Agent Mundo manages to get there just in time, however. A chase ensues, and for a fleeting moment, we see James Van Der Beek contemplating what has become of his life. 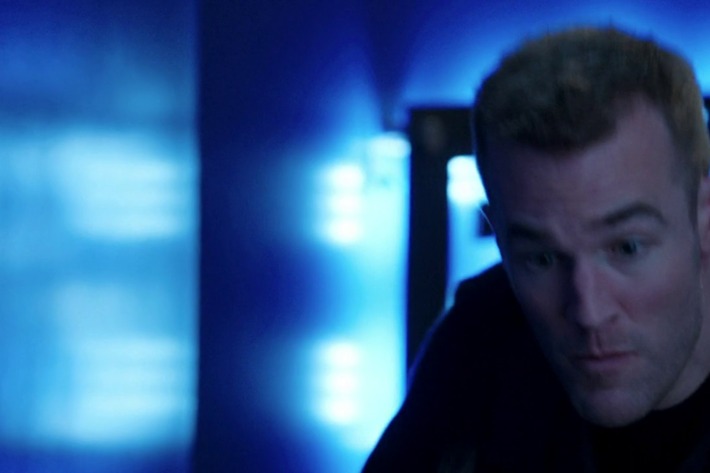 With the suspect in custody, the team finds its smoking gun on the culprit’s motion-tracking chip. By syncing up his movements with their victims, they are able to reenact the fight.

It is very silly, but I’m also pretty sure it is the first real show of ingenuity that CSI: Cyber has demonstrated yet. That’s a good sign! It also gives us a fight scene between two people with glowing crotches. the sanctity of marriage 3:38 p.m.
Here’s What Happened to All the Totally Not Toxic Couples on Love Is Blind Lauren + Cameron = Luv 4Ever.
dixie chicks 2:44 p.m.
The Dixie Chicks’ First Song in 14 Years Is Imminently (Finally) Upon Us The title track to Gaslighter, the Texas trio’s first release since 2006, arrives March 4.
departures 2:30 p.m.
America Ferrera Will Check Out of Superstore at the End of This Season The show has been picked up for a sixth season without her.
vulture sports 2:15 p.m.
Beyoncé Needs to See This UCLA Gymnast’s Stunning Homecoming Floor Routine Twenty-one-year-old Nia Dennis turned her floor routine into Beychella.
kellyoke 2:05 p.m.
A Sax and a Smooth Instrument (Kelly Clarkson’s Voice) Covered Whitney Houston Is there a note she can’t hit?
one grand books 1:13 p.m.
Helen McCrory’s 10 Favorite Books From Fyodor Dostoevsky to Steve Coogan (yes, that one).
a closer look 1:12 p.m.
Director Leigh Whannell Talks How to Make an Invisible Man “I wanted people to be stressed from the first frame.”
follow friday 1:00 p.m.
Rosa Escandón May or May Not Be a Psychic “A lot of my tweets are just things that I see around: bathrooms, packages from my mom, turtles.”
trailer mix 12:53 p.m.
Tracee Ellis Ross Is a Pop Star in the Trailer for The High Note Is that an original song we hear?
song review 12:14 p.m.
Lady Gaga’s Message Remains Clear on ‘Stupid Love’: Just Dance Gaga knows her audience too well.
By Craig Jenkins
hillary on the mic 12:09 p.m.
Hillary Clinton Is Starting a Podcast, Just Like Everyone Else You Know The new audio show will take cues from Howard Stern and Conan O’Brien.
the law 12:02 p.m.
Harvey Weinstein Trial Juror Discusses Sentencing With Gayle King Juror No. 9 goes by “Drew.”
vulture lists 12:00 p.m.
Every Lady Gaga Song, Ranked The Fame, “Stupid Love,” and everything in between.
By Richard S. He
funny videos of the month 12:00 p.m.
The Best Comedy Shorts of February 2020 Rounding up our favorite funny videos of the month.
By Luke Kelly-Clyne and Graham Techler
this week in late night 11:35 a.m.
Elizabeth Warren Describing Scrooge McDuck Won Late Night This Week From Bezos’s bald head to Tom Steyer’s weird ties, Warren knows her billionaires.
books 11:30 a.m.
PEN World Voices Festival 2020’s Lineup Revealed Highlights include Margaret Atwood, Zadie Smith, Roxane Gay, and some of New York’s own.
live from the mariana trench 11:22 a.m.
The Story Behind 30 Rock’s Magnificently Silly Leap Day Episode “Instead of doing our actual work, we can spend half a day talking about the plot of a movie for this made-up holiday.”
true crime podcasts 11:06 a.m.
This Week in True-Crime Podcasts: An Irish Subway Killer Plus: Couch surfing gone wrong.
videology 10:41 a.m.
Flood Warning: Harry Styles’s ‘Falling’ Video Will Make You Sob Clearly, he’s a Shape of Water fan.
returns 9:52 a.m.
David Cronenberg Isn’t Finished With Film Yet The legendary director on why he loves Netflix, the advantage of a Canadian perspective, and, yes, how he feels about superhero movies.
By Alison Willmore
More Stories