The Fast and Furious franchise is full of incredible special effects, but none are more impressive, or more subtle, than the series’ efforts to make all of its leading actors appear exactly the same height. Take the scene in Fast Five where Dom Toretto squares off against Luke Hobbs: The two men can look each other right in the eye, even though, in real life, the Rock has a good six inches on Vin Diesel. This effect is repeated in Furious 7, where camera tricks bring the five-foot-ten Jason Statham up to the Rock’s eye level — or is the Rock, Harrison Bergeron–style, being brought down? In the interest of transparency, let’s peek under the hood to see the true height of the actors in the Fast and Furious franchise. We’ve put them in height order — just like a real family! (Note: Vin Diesel’s height was variously reported as five-ten and six feet; we split the difference and made him five-foot-eleven.) 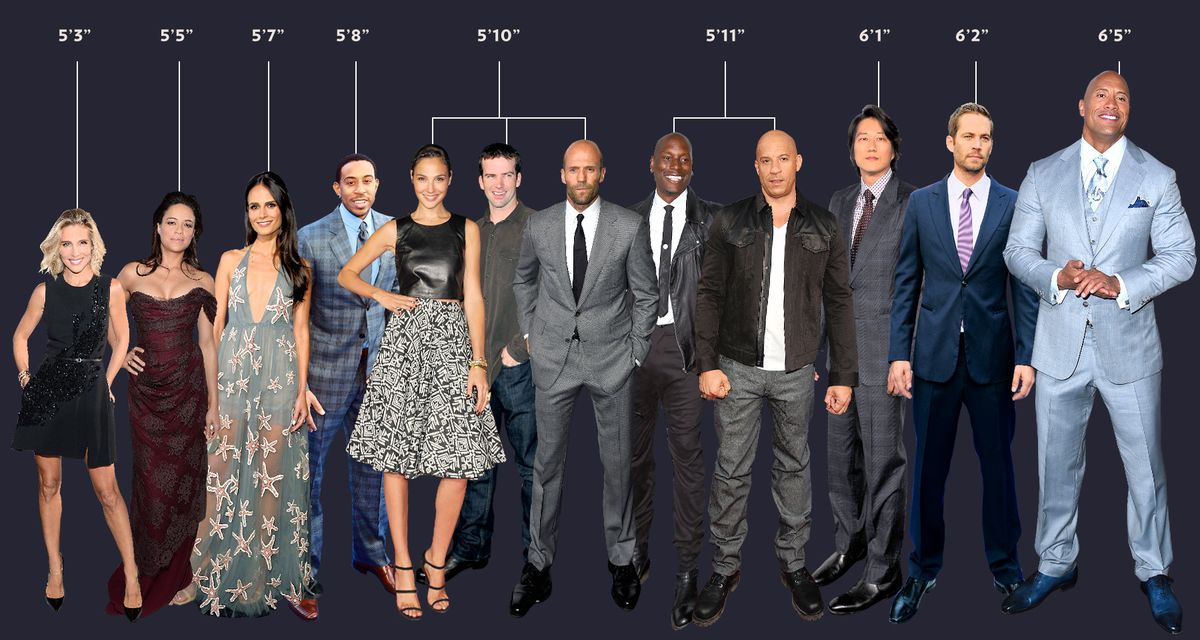 web of lies? 29 mins ago
Of All the Broadway Musicals for George Santos to Claim… He reportedly lied about producing the notorious flop Spider-Man: Turn Off the Dark.
overnights 9:00 p.m.
RuPaul’s Drag Race Recap: Golden Girl Groups The filler is gone, the competition is heating up, and the queens are fighting.
now streaming 8:00 p.m.
New on Paramount+: January 2023 Teen Wolf: The Movie, Mayor of Kingstown season 2, Clue, and more.
rip 7:30 p.m.
Melinda Dillon, A Christmas Story’s Mom, Dead at 83 The actress received Oscar nominations for her roles in Close Encounters of the Third Kind and Absence of Malice.
possessions 5:20 p.m.
Austin Butler’s Elvis Voice, Awards-Season Sweetheart, Is Out of a Job A moment of silence for the bit.
overnights 5:00 p.m.
Dear Edward Recap: The Odd and Peculiar While the title character is one of the least interesting of the bunch, Connie Britton’s Dee Dee is absolutely stealing the show.
vulture sports 4:08 p.m.
The Music Fan’s Guide to Super Bowl LVII Plan your chip breaks wisely.
trailer mix 3:50 p.m.
Outer Banks Season 3 Will Have the Pogues Poguing Around Poguelandia The new trailer is just the start of the treasure hunt.
1.5x speed 3:44 p.m.
What Does Spotify Want From Podcasts Now? A closer look at a head-spinning week in the audio industry.
vulture lists 3:00 p.m.
Every M. Night Shyamalan Movie, Ranked Making sense of the director’s tricky career.
explainers 2:45 p.m.
What the Great Netflix Password Crackdown Means for You Let’s talk about it.
overnights 2:34 p.m.
Dear Edward Recap: Good Night, Stupid Everyone is adjusting to their new normal. “Normal” being excruciating and debilitating grief.
grammys 2023 2:34 p.m.
Beyoncé(’s Husband) to Perform at the 2023 Grammys Alongside DJ Khaled, Rick Ross, Lil Wayne, John Legend, and Fridayy.
close read 1:50 p.m.
The 1619 Project’s Standout Episode Resonates With Infuriating Timeliness A six-episode adaptation of the sprawling New York Times effort can’t help but feel scattered, but “Capitalism” is honed to a sharply incisive point.
vulture asks 1:32 p.m.
What Reality-TV Stars Should Star in The Traitors Season Two? From Monet X Change to Henry Louis Gates Jr., Vulture has a veritable smorgasbord of opinions.
endings 1:21 p.m.
Even Nicolas Winding Refn Doesn’t Know What Copenhagen Cowboy’s Ending Means “Sometimes getting everything is not the right answer.”
By Roxana Hadadi
sundance 2023 12:55 p.m.
A Complete List of Films Sold at Sundance 2023 (and Their Price Tags) Sony Pictures Classics picked up mother-daughter drama The Persian Version.
no bars 12:02 p.m.
Jafar Panahi Has Been Released From Prison Following Hunger Strike The Iranian filmmaker protested his wrongful detention for 48 hours.
vulture 10x10 12:00 p.m.
The Retreat Puzzle 27-Across, Four Letters: Color favored by Elle Woods.
overnights 12:00 p.m.
The Legend of Vox Machina Recap: Actually, Split the Party The Legend of Vox Machina continues to smartly deviate from what happened in Critical Role.
More Stories