Mad Men loves a loop, an echo. This final chapter of the show has hammered home this repetition, with many of our characters reliving and redoing processes we’ve seen before. Last night’s “Time & Life,” during which Don insisted we were at “a beginning,” brought back one of the most important threads of the show: the bond between Peggy and Pete.

Peggy bravely told Stan about the baby she placed for adoption (and Stan was chastened and compassionate in response), but of course the real callback was the scene with Peggy and Pete sitting on the couch in Pete’s office — notably, right after Pete sees a gleeful child wrap her arms around Peggy. Peggy and Pete — those two sit on the couch together. They’ve had sex on the couch in Pete’s office, back in the old space in season one, but sex on Mad Men is not intimacy. Secrets are intimacy. “Time & Life” conjured two important Pete and Peggy encounters from years past, moments where the two revealed things to one another.

In season one’s “Red in the Face,” Pete returns a chip-and-dip wedding gift and exchanges it for a gun, which he brings back to his office. Because he’s a man, see. Peggy approaches him to look at some of her work (plus flirt), and they sit down on his couch while he waxes on about the thrills of hunting.

You have to be very quiet. Take it down with the first shot, or you scare it away. Then sometimes, you have to go up and finish it off. Then you tie it to the bumper and you go home.

But you know what I’ve always wanted to do? I would pick it up, throw its back legs over my shoulder, and I would drag it through the snow to this little cabin. And there, I’d hang it up between a couple of trees. Cut it open. Drain it. Dress it. And then I’d take my big hunting knife, and I’d cut this loin. Right out of the side. Then I’d go into the cabin and there’d be this woman, waiting for me, standing by one of those old stoves with the big black pipe, and I’d hand it to her. And she put it in a cast-iron skillet, and then I’d sit at the table and she’d bring it to me. And I’d wipe my knife on my knee, and then I would eat it while she watches.

That’s foreplay, Pete Campbell style. And it works, kind of; Peggy’s pretty into Pete in season one, even as he’s a callous jerk to her (plus, he’s married). The whole monologue is an admission of Pete’s crisis of masculinity, and Peggy’s the one person he thinks he can seem like a “real man” in front of. Maybe he’s right.

Peggy carries around her big secret for all of season two. We know Don knows that she placed a child for adoption, but it’s never made clear if Don knows who the father was. (Peggy tells him years later that her mother believes Don was the father.) We see Peggy move on — just as Don told her to, and pretty effectively — until the season finale “Meditations in an Emergency.” Pete confesses his love, and Peggy rebuffs him. “I could have had you in my life forever if I wanted to,” she says almost dreamily. “I could have had you. I could have shamed you into being with me. But I didn’t want to.” 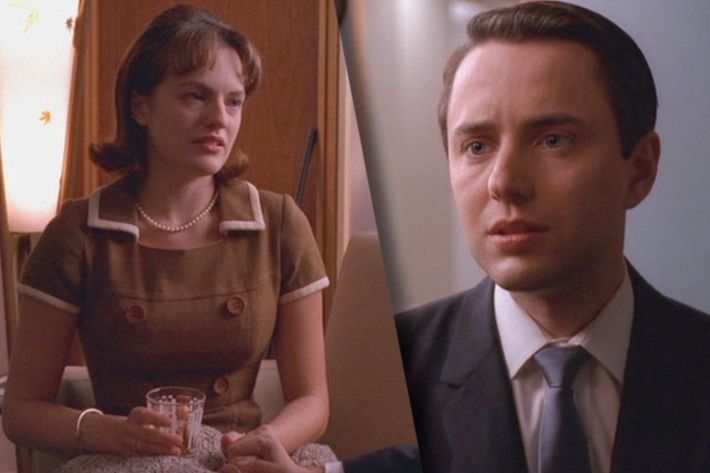 “I had your baby, and I gave it away,” she tells him. “I wanted other things.” Pete’s stunned and a little bit sad. “Why would you tell me that?” he asks.

Because of secrets. That’s the primary bonding agent on Mad Men, not love or devotion or anything else. You can bang a string of intrigued brunettes, but the person you’re closest to in the world is the widow of the guy whose identity you stole. “Time & Life” found person after person learning a secret, because that’s what bonds characters together on this show, a performance of trustworthiness no one quite deserves. The McCann secret spilled out early. Dawn and Shirley told Meredith. Pete told Peggy. Peggy told Stan. Roger finally told Don about Marie. Yes, Don confesses, California holds a special place in my heart. And so we get one more — and maybe one last? — secret couch exchange between Pete and Peggy. They know each other, and they weirdly understand each other, at least a little, or at least a little more than other people do.

+Comments Leave a Comment
Peggy and Pete, Together Again on Mad Men