Coming off the heels of last week’s fantastic episode, it was fair to assume that “Divine Inspiration,” the latest episode of RuPaul’s Drag Race, would inevitably be something of a letdown. That assumption couldn’t be more off the mark, however. With the John Waters–themed episode reaching even greater heights than last week’s conjoined-twins challenge, it’s possible season seven has finally settled into its sweet spot. Let’s take a look at what everyone will be chattering about this week. 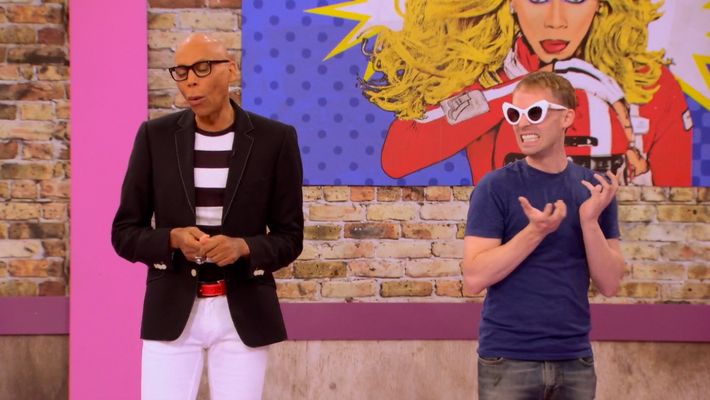 Reading is FundaMENTAL
Hands down, the best mini-challenge of any season encompasses the opening of the library, allowing each queen the opportunity to read her competition for laughs. The competitor with the quickest mind and sharpest tongue wins, and of course, being funny helps. The shade, as far as any of that goes, isn’t particularly inspired (though the jab at Ginger asking if she ever managed to save Carol Anne from the poltergeist was pretty amazing), but where things get really interesting is when it became evident that, though the challenge ends with a Trixie Mattel victory, the library never really closes.

Which is just another way of saying that an already shady crop of queens gets even shadier as the episode progresses. Tensions are already heightened with the return of previously eliminated Trixie, but the strain escalates, and Pearl and Fame can’t stop picking at each other, a rivalry made all the more inane and entertaining because they’re basically the same person. Pearl and Fame’s pick-a-little, talk-a-little isn’t helped by the fact that they end up stranded on a team together (with wayward Violet) because no one else wanted to work with them. However, the brilliant part of all the bitterness being flung around the workroom is that, combined with a quippy judge’s panel for the ages, it makes for some fantastic pull quotes, which means that competition for quote of the week will be particularly fierce. 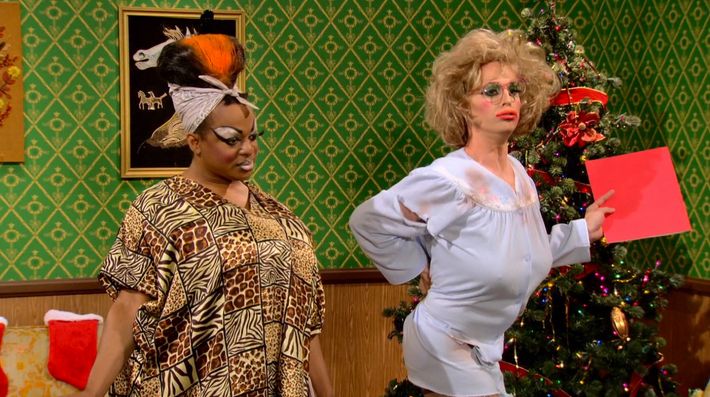 Wheat and Chaff
Thanks to another challenge, in this case, filming musical scenes that take inspiration from John Waters’s films, the contestants manage to divide themselves according to strength. Kennedy and Katya team up, as do Ginger and Trixie, leaving Pearl, Fame, and Violet in the remnant pile. While the two pairs all host strong performers, the girls left identify far more as fashion queens, meaning that they were always going to be dead weight in a performance challenge. However, all three have had their moments of weakness throughout the season or, as in Violet’s case, just have trouble playing with others. Typically in a season of Drag Race, it’s at about this point that you can determine who the top three will be, based wholly on who’s strong where. If I were predicting today, I’d say Kennedy, Ginger, and Katya are the top three, with a Violet dark horse, only because the divide between good and bad is becoming shockingly stark. 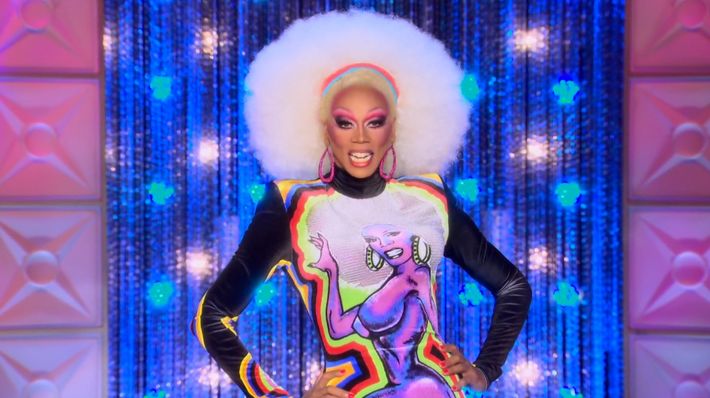 Ru’s Showstopper
Perhaps because the runway challenge for the queens was “Ugliest Dress”–based, or perhaps just because it was a jaw-dropping look, RuPaul threw down the gauntlet with her dress at judge’s panel. A full-length, curve-hugging gown, with a depiction of none other than Queen Ru herself, complete with sequined white Afro. It was, for lack of a better word, divine, and almost certainly the best look we’ll see all season. 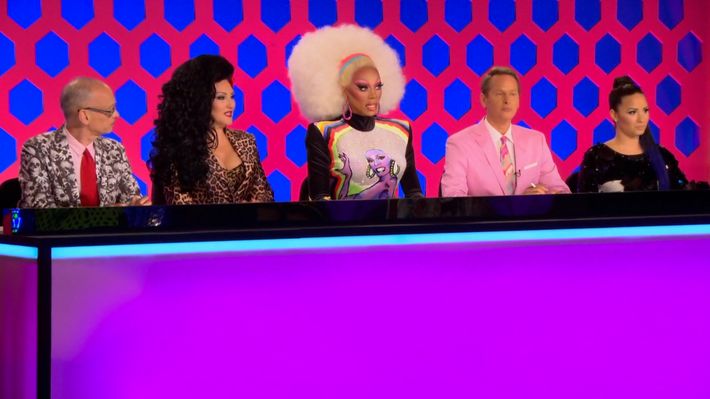 Opposites Attract
When the episode opened with the announcement that the guest judges were to be Demi Lovato and John Waters, I’ll admit I was a bit agog. Talk about your bizarre pairs. Yet the judge’s panel consisting of Waters, Lovato, RuPaul, Michelle Visage, and Carson Kressley absolutely gave me life. Each judge was consistently hilarious, but more important, gave cogent and insightful criticism when it came to evaluating the competitors. Every episode should have a panel this great. 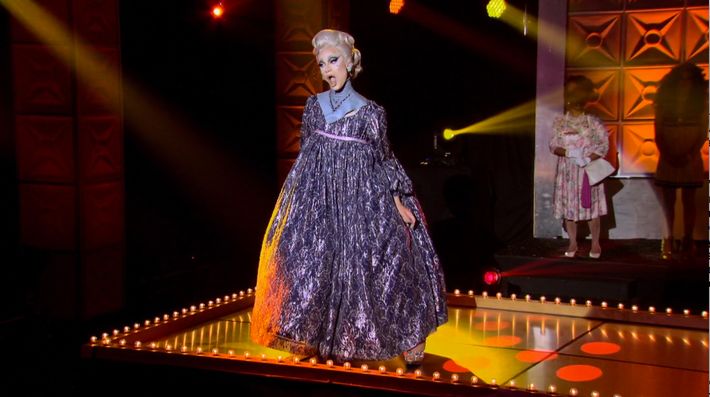 Fade Away
Surprising no one after their awful performances in the video short “Poo” and off-the-mark “pretty” ugly dresses, Pearl and Fame, after sniping at each other all episode long, end up facing off as they lip-sync for their lives. As amazing as Ginger was in last week’s lip-sync, Fame and Pearl were both the opposite, as though instead of drawing inspiration from the work of John Waters or Divine, they’d both determined to model their performance after Flat Stanley. Throughout the song, “Really Don’t Care” by guest judge Demi Lovato, I couldn’t help but marvel at how dynamic Lovato’s vocal work is, not because it is, particularly, but because the queens lip-syncing to it were just that bad. In the end, Fame goes home, and with it, all of her wasted potential. In a season full of characters, it’s just never going to be enough to be a pretty face.

Line of the Night Honorable Mentions:
“Miss Fame, you’re such a talented makeup artist. I’ve never met anyone who’s able to shove their head so far up their own ass without smudging their eyeliner.” —Katya with the read.

“John Waters has a filthy, twisted, delinquent sense of humor — he’s my hero.” —Katya again, with a little hero worship.

“Neither of us have ever topped anything before!” —Ginger aspiring to new heights.

“Good luck and, by all means, f**k it up.” —RuPaul decides to shake up her moral support.

“Take that criticism, and apply it as much as you apply glitter to your eyelid, girl!” —Ginger hopes Trixie will get inspired.

“It’s not like the pride flag, it’s like the shame flag.” —Carson sizes up Violet’s fantastically atrocious rainbow clown dress.

“If it ain’t brocade, don’t fix it.” —Carson on Fame’s curtain caftan.

theater review 9 mins ago
In Exception to the Rule, Detention Is a Whole Other Class of Punishment Dave Harris’s play goes into an after-school penalty that’s not really intended to teach lessons.
overnights 9:30 p.m.
The Real Housewives of Beverly Hills Recap: Tabled Discussion Supposed empath Sutton is at the center of two boring, petty fights that don’t amount to much.
solidarity forever 8:05 p.m.
Squid Game Season 2 Wants Us All to Just Get Along Solidarity forever!
let's go party 7:12 p.m.
Greta Gerwig’s Barbie World Keeps Getting Bigger Issa Rae, Hari Nef, and Michael Cera are the latest to jump in.
hot goss 7:07 p.m.
Rumormongering Joins the Cast of Greta Gerwig’s Barbie Triple-cast Ken and Barbie makes it safe. Triples are best.
the industry 6:22 p.m.
Members of Scott Rudin Broadway Productions Freed From NDAs Including actors and stage managers on To Kill a Mockingbird and West Side Story.
sorry to bother you 6:11 p.m.
Armie Hammer True-Crime Special Will Detail 5 Generations of Family Sins Father, son, and House of Hammer.
vulture 10x10 4:01 p.m.
The Lightning Puzzle 18-Across, Three Letters: The ‘R’ in “The Sopranos” logo is one.
under oath 3:40 p.m.
Amber Heard’s Ex–Best Friend Testified ‘Hair Was Ripped Out of Her Head’ Amber Heard’s sister also took the stand.
swiftology studies 101 3:17 p.m.
Dr. Taylor Swift Diagnoses NYU Grads As Cringe “No matter how hard you try to avoid being cringe, you will look back on your life and cringe.”
she *and* him? in this economy? 3:10 p.m.
Ahead of Their Brian Wilson Tribute Album, a Very She & Him Q&A Zooey Deschanel and M. Ward on the Beach Boys, harmonies, and why their band has lasted this long.
now streaming 3:00 p.m.
Checking in on Netflix’s Original Movies: May 2022 Edition A Rebel Wilson rom-com, a World War II espionage thriller, a Bollywood genre mashup, and more.
rendezcruise 2:32 p.m.
Tom Cruise Is Being Boring at Cannes The once-infamous agent of chaos has overcorrected his press strategy as he promotes Top Gun: Maverick at the French festival.
burners 2:09 p.m.
A Celebration of Life for Margot Robbie’s Alleged Letterboxd Account Fans found an account appearing to belong to the Barbie star … then it went dark.
overnights 2:00 p.m.
Conversations With Friends Recap: You Are The Bane of My Existence Okay, so maybe having an affair with an older married man is more challenging than it initially seemed.
close read 2:00 p.m.
Tom Cruise’s Last Stand Thirty-six years after the original, Top Gun: Maverick eulogizes the actor’s entire career, and an America that may not exist anymore.
By Bilge Ebiri
podcasts 1:53 p.m.
This Era of Reply All Is Ending Hosts Alex Goldman and Emmanuel Dzotsi will sign off in June, leaving the show’s future unclear.
music 1:11 p.m.
The 18th Century’s Surround-Sound Machine Inside the organ at St. Bartholomew’s.
role call 1:00 p.m.
Kathy Najimy Answers Every Question We Have About Sister Act On how Entertainment Tonight host Mary Hart inspired the character’s relentless pep and sneaking backstage in a bunny costume to meet Bette Midler.
By Matthew Jacobs
movie review 1:00 p.m.
The Horror of Men Doesn’t Go Far Enough Alex Garland’s latest body-mangling film lacks the depth and bravado it needs to succeed.
By Angelica Jade Bastién
More Stories