Recently, the cultural blogosphere went nuts over a film criticism video, “First and Final Frames,” which juxtaposes the opening and closing shots of critically acclaimed films. The thesis of “First and Final Frames” proposes that by understanding the first and last shots of these films, we can better understand what directors are trying to do with their work as a whole.

To recap: The party in the opening scene is thrown by a friend of one of the four start-up builders at the center of the show; the friend has just sold his company to Google for hundreds of millions of dollars, and now he’s throwing a party headlined by Kid Rock. 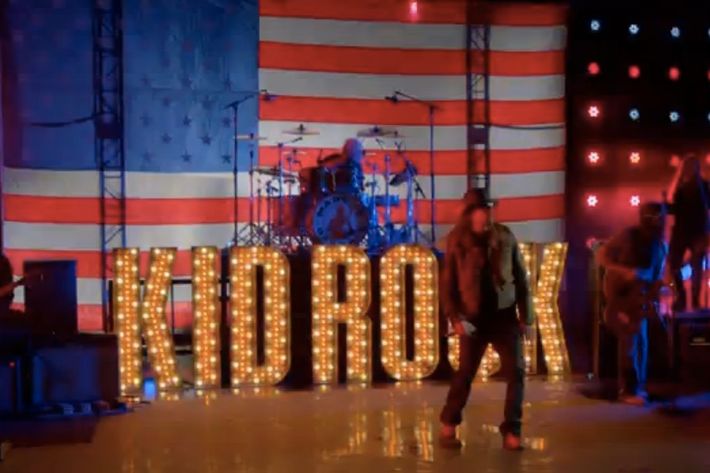 Months elapse before we arrive at the climactic puking scene: Pied Piper triumphs over a rival piece of software at a high-profile tech competition, setting them up for — well, perhaps a sale to Google for hundreds of millions of dollars, making them all as rich as the Kid Rock party-thrower from episode one.

And then Richard runs outside and vomits into a trash can. Roll credits. End of season. 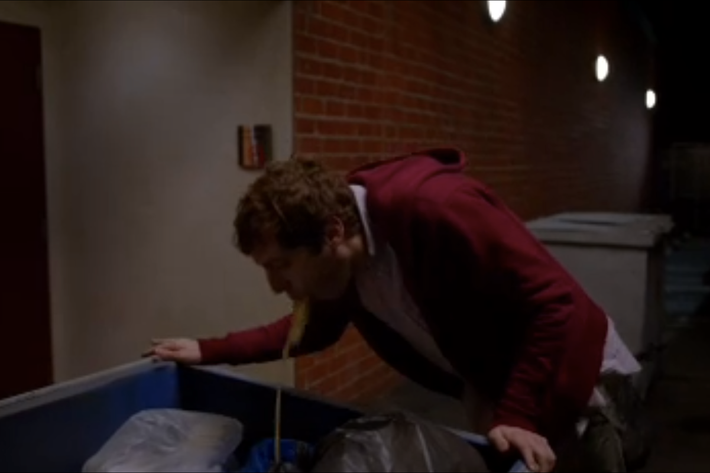 Silicon Valley is, mostly, a story about and satire of Party Silicon Valley, and the wannabes on the outside of the party looking in. The stripper who takes payments via Square; the graffiti artist who creates start-up logos for tens of thousands of dollars; the prepubescent code ninja who will swoop in to save your project, for a fat check made out to his parents — this is all Party Silicon Valley, potent symbols of an economy and a culture in ascendance.

Vomit Silicon Valley, meanwhile, always lurks in the shadows. It is the fate that awaits Pied Piper if, or when, they fail. Nausea is the physical manifestation of digital ailments: low download counts, poor user retention, a marketing blitz by a well-funded competitor, the uncertainty of new entrants.

Sometimes the two intersect: One of the defining characteristics of Party Silicon Valley is, in fact, vomit— Word Vomit. Think of the way that English is digested and regurgitated by the show’s many charlatans and venture-funded con men in the pursuit of fortunes: While Richard struggles to elucidate his start-up’s mission, other Valley entrepreneurs elide vowels and append -lys to name their start-ups, and claim, ad nauseam, to want to “change the world.” (Vomit.)

This tech logorrhea is contagious, and like many of the characters and situations on the show, has its own basis in reality. Consider a recent company-wide memo written by Evan Spiegel, the CEO of Snapchat. After bemoaning press coverage of some leaked internal emails amid the Sony hacks, Spiegel concludes his (public) missive with an inspiring marching order for his troops: “We’re going to change the world because this isn’t the one we want to be living in,” Spiegel writes. A reminder that this is coming from the CEO of Snapchat, an app that lets you doodle on selfies.

Spiegel is living in real-life Party Silicon Valley; his story, like his utopianism, echoes many of the plot points on the show. Last year he turned down a $3 billion buy out offer from Facebook in order to grow Snapchat independently; Facebook, in turn, created an in-house version of the app, in hopes of quashing it before it got too big. Snapchat, like Pied Piper, won; Facebook’s Slingshot, like Hooli’s Nucleus, lost. You could forgive Mark Zuckerberg if he feels some indigestion whenever he receives a new Snap.

Season one of Silicon Valley ends with the promise of zillions of dollars in Pied Piper’s future, and that soon they would be the ones hiring Shakira to play their press conferences. As Monica says in a key nausea-inducing moment, “this is when it really starts.” Season two of Silicon Valley begins on Sunday. The parties will be bigger. So too, presumably, will the vomit.

Jason Gilbert is a senior editor at Yahoo Tech.

+Comments Leave a Comment
The Party-Vomit Theory of Silicon Valley

george floyd Yesterday at 11:19 p.m.
Insecure Actor Kendrick Sampson Hit by Rubber Bullets at LA Protest Police also hit him with a baton.
overnights Yesterday at 10:00 p.m.
Space Force Recap: Skinny Fuel An old-fashioned “special guest star” episode is pretty thin overall but features some great work from Kaitlin Olson and Janina Gavankar.
protests Yesterday at 8:39 p.m.
Killer Mike Addresses Atlanta Protestors in Emotional Speech He urged protestors to “go home.”
auteur theory Yesterday at 4:27 p.m.
David Lynch Is Basically Ron Swanson Now He got his swing-out urinal just right.
overnights Yesterday at 3:00 p.m.
Space Force Recap: Foreign Correspondent Like the spy investigation at its center, this episode doesn’t really add up to much in the end.
a quarantine romance Yesterday at 1:11 p.m.
Bachelor Nation Cross-Pollinates Couple With Victoria Fuller and Chris Soules They’re quarantining on his farm.
last night on late night Yesterday at 12:00 p.m.
Jimmy Kimmel Begs Older Americans to Vote Donald Trump Out of Office “Is this who you want leading us? A president who clearly and intentionally inflames violence in the middle of a riot to show how tough he is?”
black lives matter Yesterday at 10:49 a.m.
Billie Eilish Spanks All Lives Matter Crowd: ‘Will You Shut the F- -k up?’ “This is not about you. Stop making everything about you.”
overnights Yesterday at 9:00 a.m.
Space Force Recap: The Fog of War The best episode of the series so far balances some genuine laughs with smart commentary about the military’s “high-tech body bags.”
radio vulture Yesterday at 7:00 a.m.
Stan Culture Is Due a Reckoning. So Are the Celebrities They Worship. Last week was evidence of a slow and peculiar shift in the relationship between fans and the musicians they love over the last decade.
By Craig Jenkins
justice Yesterday at 1:01 a.m.
Beyoncé Calls for Justice in George Floyd Killing: ‘We All Witnessed His Murder’ “There have been too many times that we’ve seen these violent killings, and no consequences.”
overnights Yesterday at 12:00 a.m.
Space Force Recap: The Greatest Spaceman Mark Naird can’t be alone with his thoughts. Or too many ants.
oh boy! see ya real soon! 5/29/2020 at 10:36 p.m.
Here’s Everything We Know About Disney Parks Reopening Walt Disney World in Orlando has been approved to begin reopening on July 11.
overnights 5/29/2020 at 9:31 p.m.
RuPaul’s Drag Race Season-Finale Recap: Long May She Reign Even when you take away the pageantry and production value, you’re still left with a show with a hell of a lot of talent, creativity, and heart.
bachelor nation 5/29/2020 at 9:18 p.m.
The Bachelor’s Colton Underwood and Cassie Randolph Announce Breakup A bachelor once more.
overnights 5/29/2020 at 8:00 p.m.
Space Force Recap: Space Is Hard The comic timing between Steve Carell and John Malkovich and some solid character development give Space Force a much-needed jolt.
universal monsters 5/29/2020 at 7:15 p.m.
Ryan Gosling’s Wolfman to Join the Rest of the Universal Movie Monsters Following in the footsteps of Elisabeth Moss’s The Invisible Man earlier this year.
quarantuning 5/29/2020 at 5:45 p.m.
Watch These Livestreamed Concerts During Your Social Distancing DJ D-Nice, Miley Cyrus, Ben Gibbard, and a lot of Diplo.
By Justin Curto
two friends 5/29/2020 at 5:41 p.m.
Josh Thomas Laments His ‘Poor Wasted Penis’ Whilst Thomas Ward laments having a toddler on the latest episode of Two Friends.
special effects 5/29/2020 at 4:40 p.m.
Baby Yoda Wasn’t Always So Cute, Huh? The early concept art for The Mandalorian’s breakout star was … different.
By Calum Marsh
More Stories