Earlier today, Britney Spears and Iggy Azalea’s video for “Pretty Girls” dropped. It is meant to be a parody of sorts of 1988’s Earth Girls Are Easy, a movie in which three aliens come to Earth to try to sleep with Earth women — shenanigans ensue. The music video filters this premise, through God knows what, and the result makes no sense and all the sense. It’s the best. It’s the worst. I love it! Here are the 37 silliest, most insane things that happen, in chronological order:

2. 0:04: Britney is apparently lounging by the pool at night.

3. 0:04: She is wearing sunglasses. Again, it is apparently nighttime. 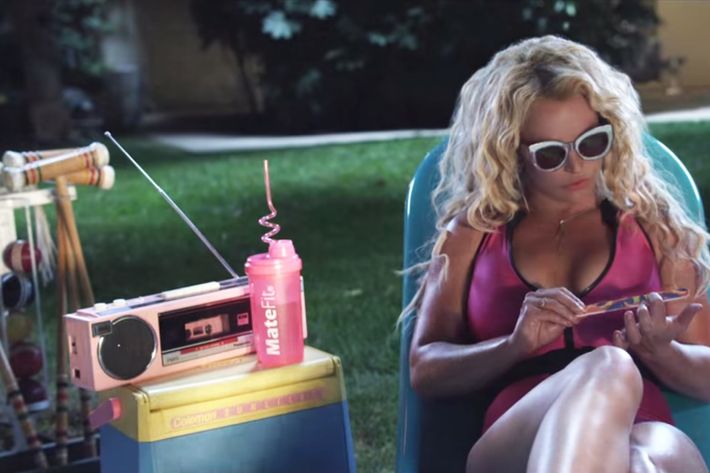 6. 0:05: Despite the previous shot establishing it is night, there’s a time lapse from day to night.

7. 0:05: All the houses in Britney’s neighborhood have pink roofs.

8. 0:19: Iggy appears from Britney’s pool completely dry, just like an alien would.

9. 0:42: Despite the shots of pink nail polish being put on, it is very clear that Iggy’s nails are blue.

10. 0:49: Iggy makes a TV explode by looking at it. It’s unclear if it is intentional or not. However, considering that Britney doesn’t get mad, we have to assume that Britney hated that TV, which, as an alien, Iggy sensed.

11. 0:50: We then zoom into the TV, cut to: Britney and Iggy driving a car. It’s daytime. They are wearing the same outfits from the night before.

12. 0:52: Britney is pointing a hair dryer at Iggy. Iggy’s hair is most definitely already dry, considering that Britney did it the night before. Also, as was established earlier, water doesn’t stick to her. Even so, where is that hair dryer plugged in?

13. 1:07: The sign for the car wash place, called “Hand Car Wash,” is a giant hand holding a sign that says “HAND CAR WASH,” with a car on top. Why would you want a hand car wash? I know the video is supposed to be all ‘80s, but they had those automatic drive-through car washes at the time. Is the video actually a satire of our dependence on technology?

14. 1:09: Britney’s license plate reads, “PRTYGRLS,” which we are supposed to read as “pretty girls,” thanks to context clues. But on the road, I feel like your first assumption would be it means “party girls,” as there are two Ts in pretty. (Or maybe you’d think it means “Pretty Grills.”)

15. 1:11: Iggy does a magical alien snap. All it does is turn the hose water pink. It’s ostensibly still water. It’s just pink now.

16. 1:13: Speaking of the hose, it is being wielded by a man with big muscles (specifically, he has an uncomfortably large bicep, which sits on what looks like a pretty average forearm). It’s unclear if we are supposed to find him hot or silly and if he finds the pink water revelatory or terrifying. (It also feels like a Zoolander allusion, if anything.) 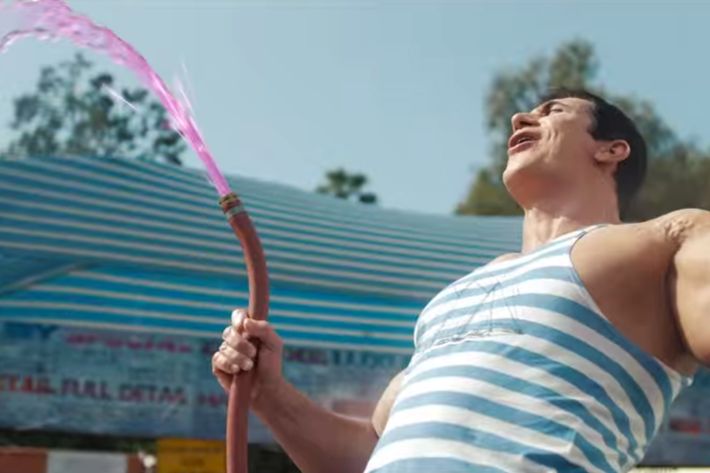 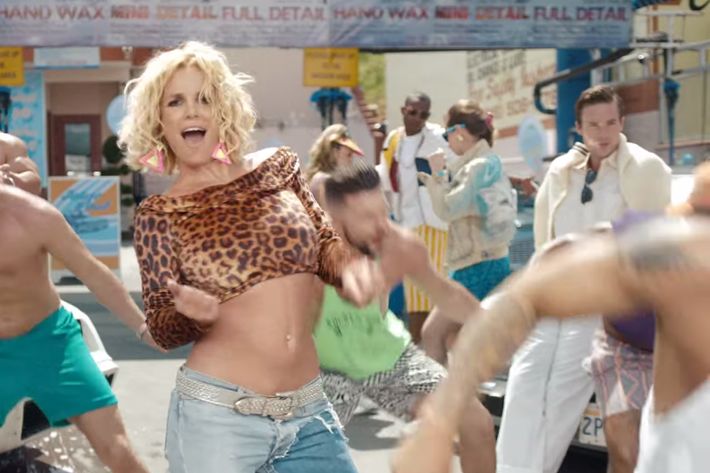 18. 1:30: Brit sings,” They don’t see me rolling my eyes / They buzzing around me like flies.” In this metaphor, Britney is comparing herself to shit.

19. 1:42: Iggy alien touches an ATM. She is startled (acting!) as money starts flying out. Okay, wait, so what is Iggy’s deal here? I get that she’s an alien, but is she also like a baby alien that is in an Iggy-shaped bod? Because, assuming she’s a full-grown alien, wouldn’t she be aware of her powers?

20. 1:45: Here are the lyrics of the chorus: “All around the world, pretty girls / Wipe the floor with all the boys” — so far, so good. “Pour the drinks” — pour the drinks? Is she saying that there are a lot of female bartenders? Probably. “Bring the noise” — ladies is pimps and DJs too? “We’re just so pretty!” — maybe remove “just.” “All around the world, pretty girls / Jump the line, to the front” — probably didn’t need “to the front.” People weren’t assuming pretty girls stroll into the middle of lines.

21. 1:46: Britney reacts to the flying ATM money not in shock but like “Aw, you shouldn’t have.” This is not how a human would react. Maybe she too is an alien.

23. 2:05: Iggy, who just a second ago was dancing and singing along and waving cash in Britney’s face, doesn’t know how to wave. She has her arm in a wave position, but instead of shaking her hand, she shakes her whole forearm.

24. 2:10: I know the actress is playing a person who would chew gum, but it’s still weird to see someone with gum in their mouth in a music video. Seems rude. 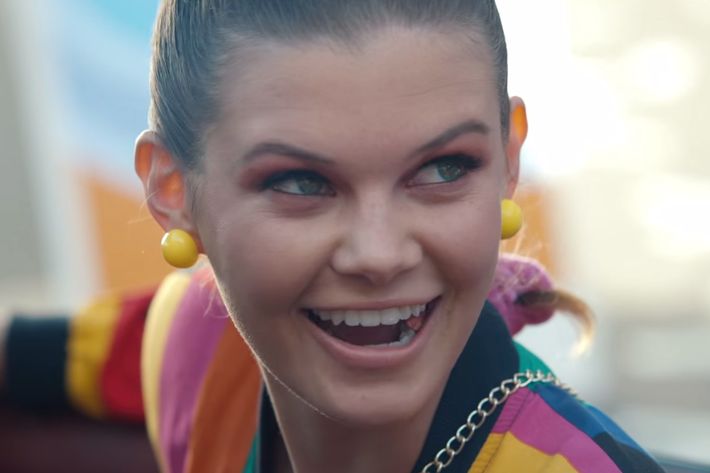 25. 2:14: Iggy says “totally” super weird. The problem here is that it’s very not clear whether Iggy is trying to say it weird because she’s a baby alien, or because she’s Australian and she just doesn’t have the ear for regional accents of the past. 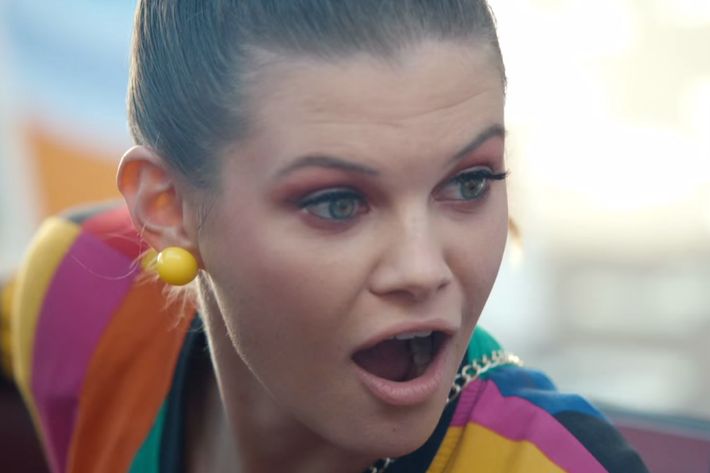 27. 2:24 Iggy uses her alien powers to fix Britney’s broken cell phone, which is odd, as so far Iggy’s powers only broke the things she used them on. Nonetheless, Britney’s phone turns into a contemporary, product-placed Samsung smartphone. Everyone somehow recognizes this thing as a phone, despite it looking nothing like his or her understanding of what a phone looks like at the time.

28. 2:27: The phone has Google Chrome on it. In the universe of this phone, Britney, with the help of a baby alien, essentially invented the internet and started Google.

29. 2:38: The baby alien asks to call Britney’s friends for her, which is already an odd request. (Have you ever picked up a phone call from a friend, but the voice was off, but you weren’t sure if it was just because you don’t speak to that friend on the phone that often or if it was just someone else using their phone because they are driving or whatever? It’s terrible.) At first she talks all weird, like a baby alien, but then she supposedly gets the hang of it and nails the Valley Girl accent. This interpretation of the scene is based on the car’s reaction. She does not nail this accent.

30. 2:47: Iggy and Britney do fun music-video poses in the back of the car. Forty seconds ago, she couldn’t wave.

33. 3:48: This is not what alcohol looks like. Did they ship in alien alcohol from space to make Iggy feel comfortable? 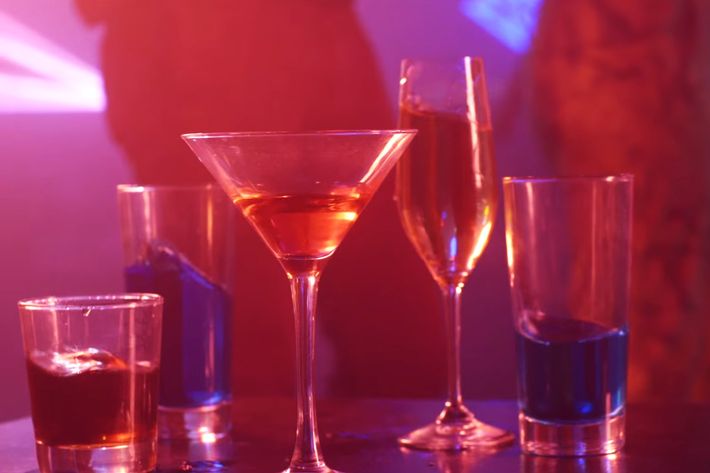 34. 3:53: To show that something freaky and alien is happening, some purple force knocks a bunch of napkins off the bar. And the beefy bartender is like, “Oh no! My napkins!”

35. 4:03: A spaceship is here to beam up Iggy and Britney. Britney’s face says, “Finally, my dream has come true — what a glorious thing to happen,” which is odd, because the entire video established how great and easy Earth is for pretty girls. It’s just bartending, DJing, and cleaning up afterwards by wiping the floors with boys. Iggy’s face says, “Yes, this part of the music video shoot in which this happens.” 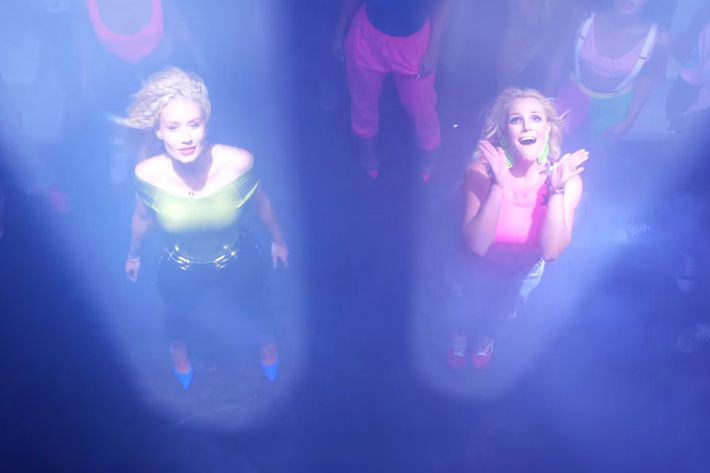 36. 4:08: Video over. 4:09 Wait, there’s more dancing in the car!? Is this what space is like? Or, wait, it appears like Britney and Iggy (especially Britney) are truly having the best time: Are they in heaven? Is that what the video is about: That even if you spend your days being pretty and not understanding how waving works, you’re still going to die, but don’t worry, you’ll be pretty in heaven, so things will be mostly the same?

why 9 mins ago
We Listened to ‘The Breakfast Club’ Talk With Rush Limbaugh So You Don’t Have To The radio hosts attempt to bridge a gap no one wants to walk over.
overnights 23 mins ago
Killing Eve Season Finale Recap: Do You Ever Think About The Past? Where did Killing Eve lose its way?
some good news 3:57 p.m.
Ariana Grande Gets Her 4th No. 1 Debut With ‘Rain on Me,’ Breaking Record Gaga also becomes the third artist to top the charts in each decade of the 21st century.
instagram 3:15 p.m.
Lana Del Rey Posts Looting Video on Instagram, Gets Called Out by Kehlani Del Rey of recently dated a cop fame.
chat room 3:08 p.m.
Malia White Wouldn’t Be Below Deck’s First Female Bosun Without Captain Sandy Below Deck: Mediterranean’s new bosun talks returning to the series, quarantine, and sexism in yachting.
now streaming 3:00 p.m.
New on Disney+: June 2020 Avengers: Infinity War, Schoolhouse Rock, and more.
two friends 1:30 p.m.
Roy Wood Jr. and Jimmy O. Yang Barely Survived Middle School Both encountered their fair share of bullies.
food tv 12:50 p.m.
Where Can Food Travel Shows Take Us Now? Episodes shot even a few months ago feel like artifacts from another time.
By Rachel Sugar
sotw 12:34 p.m.
TikTok’s ‘Wipe It Down’ Challenge Didn’t Start With the Song ‘Wipe It Down’ Unpacking the origins of this week’s TikTok song of the week.
By Zoe Haylock
now streaming 12:00 p.m.
New on HBO: June 2020 Perry Mason, Ford v Ferrari, Ad Astra, and more.
black lives matter 11:43 a.m.
Ariana Grande, Halsey, and More Celebrities Spent Their Weekends Protesting From all over the country.
close reads 11:40 a.m.
Cops Are Always the Main Characters TV perfected the cop show, metastasized it, and then franchised it into ubiquity. How does that affect the way audiences think about police?
By Kathryn VanArendonk
vulture guides 11:16 a.m.
The Class of 2020’s Guide to All the Virtual Celebrity Commencement Speeches Including Barack Obama, Barack Obama, and Barack Obama.
last night on late night 11:03 a.m.
John Oliver Recaps the Year of America’s ‘Brutality Bingo’ “That misconduct is in and of itself built on a legacy of white supremacy.”
history lessons 10:50 a.m.
Spike Lee Debuts Short Film Connecting George Floyd and Do the Right Thing “This is history again and again and again …”
postponements 10:48 a.m.
Drama Desk Awards Postponed Out of Regard for Ongoing Protests “We stand together with our black colleagues against the racial injustice and violence in our nation and city.”
best of 2020 9:00 a.m.
The Best Movies of the Year (So Far) From a new Netflix rom-com to a retro sci-fi movie on Amazon to the final Trip film.
By
now streaming 9:00 a.m.
New on Amazon Prime: June 2020 Knives Out, Dirty Dancing, Where the Wild Things Are, and more.
extremely online 8:28 a.m.
K-Pop Stans Spammed the Dallas Police Department’s App With Fan Cams We’re all just doing our part, okay?
obits 1:59 a.m.
Herb Stempel, Quiz Show Whistleblower, Dead at 93 John Turturro portrayed Stempel in the 1994 Oscar-nominated historical drama.
More Stories