After a turbulent period of stolen screenplays and regrettable lawsuits last year, Quentin Tarantino decided to eschew his frustrations and finally film his mammoth screenplay for The Hateful Eight, a purportedly brutal and bloody Western about a coterie of strangers who tell each other stories and kill stuff, like The Canterbury Tales but with more swearing. The film’s colossal cast includes Samuel L. Jackson as Major Marquis Warren, “The Bounty Hunter”; Kurt Russell as John Ruth, “The Hangman”; Jennifer Jason Leigh as Daisy Domergue, “The Prisoner”; Walton Goggins as Chris Mannix, “The Sheriff”; Demian Bichir as Bob, “The Mexican”; Tim Roth as Oswaldo Mobray, “The Little Man”; Bruce Dern as General Sanford Smithers, “The Confederate”; and Michael Madsen as Joe Gage, “The Cow Puncher.” Channing Tatum, James Parks, and Zoë Bell will also make appearances. 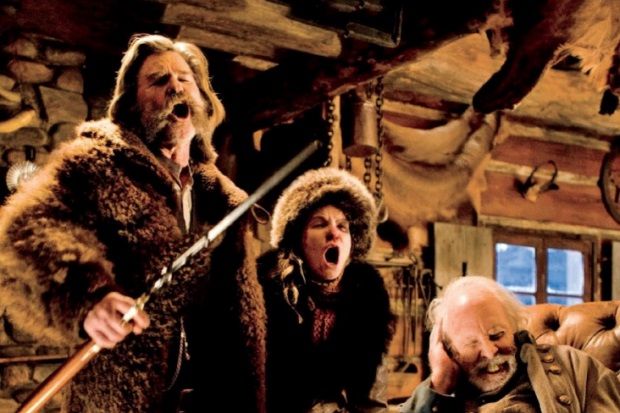 The film’s teaser came out illegally a few months ago, then legally last month, and has since been taken down. Now Entertainment Weekly has pictures of the cast in their Old West winter garb, with Jason Leigh’s “infamous outlaw” looking a bit battered (though no less lethal) and Sam Jackson’s former Union officer possessing the debonair air of an old and wizened man with a few dark secrets and two six-shooters.

extremely online 5:08 p.m.
Tati Westbrook Returns to YouTube With a Life Update “It’s kind of gone from Lifetime movie, because there’s so many crazy parts, to maybe like a thriller?”
viewing guide 4:53 p.m.
Meet Elite’s New Class, Nearly the Same As the Old Class The halls of Las Encinas will be full of familiar faces repeating their senior year, but there are some sure-to-be-dramatic new additions as well.
unpacking genius 3:51 p.m.
Two Documentaries About Legendary Performers Touch the Surface of Their Talent A pair of films explore the artistic legacy of Alvin Ailey and Rita Moreno, but both demonstrate the limitations of trying to explicate genius.
theater review 3:30 p.m.
The Shed Artwashes Hudson Yards. Who Artwashes the Shed? Open Call strives for drama in the long shadow of a luxury mall.
buffering 3:00 p.m.
It’s About to Get Real for Apple TV+ Why those extra-long free trials are (finally) coming to an end.
extremely online 2:50 p.m.
Our Chemically Imbalanced Romance With Trisha Paytas I pressed play on Trigger Warning on a lark and enjoyed it at a time when the H3 extended universe seems fraught with disputes and news of lawsuits.
By Craig Jenkins
comedy review 2:12 p.m.
The Messy, Proud Variety of Pause With Sam Jay On her HBO show, the comedian just wants to shoot the shit.
By Kathryn VanArendonk
buffering 2:05 p.m.
Seinfeld Won’t Be Streaming Anywhere for a While, and That’s Good for Netflix Let the demand build.
tribeca festival 2:04 p.m.
Elijah Wood Is Just a Really Nice Guy, Honestly  The No Man of God star even gave us a pizza recommendation.
chat room 2:00 p.m.
In Starstruck, Rose Matafeo Sets the Course for the Rom-Com’s Evolution “It was really nice to write two characters who were just funny, and a female character or woman who was unashamedly funnier than the guy.”
trailer mix 1:27 p.m.
The Shrink Next Door Trailer: Paul Rudd Takes Will Ferrell’s Insurance and Life Worst psychiatrist ever.
streamliner 1:25 p.m.
Say Your Good-byes, Seinfeld Is Leaving Hulu This Month Don’t worry, it’ll be on Netflix (eventually).
in development 1:08 p.m.
Ziwe Scams Herself a New Comedy Series on Amazon Republicans, stay mad.
father's day 2021 1:00 p.m.
45 Last-Minute Gifts That Will Arrive by Father’s Day From an electric razor to a dopp kit and pour-over kettle.
By The Editors
good one podcast 12:42 p.m.
Samantha Bee Reckons With Being a Boss  The Full Frontal host talks paid family leave and what she’s learned from her job on Good One.
By Jesse David Fox
my single is dropping 12:30 p.m.
Tyler, the Creator Built a Little New Song, ‘Lumberjack’ His new album Call Me If You Get Lost will be out June 25.
1.5x speed 12:25 p.m.
Bowen Yang’s Big Heist (and 2 More Podcasts Worth Trying) Including Welcome to Night Vale’s ninth anniversary.
the streaming wars 12:23 p.m.
Beatles Documentary Get Back to Come Together on Disney+ in November It’s six-plus hours of footage.
vulture festival 2021 12:16 p.m.
Vulture Festival Is Ready to Hang Out in Person This Fall Can we hug you??
extremely online 11:01 a.m.
Mariah Carey Is Still Obsessed With the #WipeItDown Challenge She brought back an old friend.
More Stories