The penultimate episode of CSI: Cyber season one (of 10 billion) opens with Krumitz running into a house. Good! James Van Der Beek has done the bulk of the sprinting on this show, but now it’s Charlie Koontz’s turn.

Krumitz runs to a computer, where he does … something? Not sure what. He runs back downstairs, where Agent Ryan and his brother are there, held at gunpoint by … someone? A lot of questions already!

The shit is hitting the fan. Detroit’s power grid has been hacked. It’s catastrophic. So, so dark. All because of the hacker.

Nelson and Ramirez are working on getting the power grid back online. They’re also going to have to “counterhack” the hack with a malicious patch or something.

Meanwhile, our hacker managed to unlock a safe full of jewels. But he’s not going for the jewels. Whaaaaaaattt??? He’s going for the laptop in the safe. What’s on the laptop? Cyberjewels? We’ll soon find out.

On his way out, a guy tries to stop the hacker and gets shot. He dies.

Mundo finds that the computer can’t connect to the internet. The only thing on it is a raided Bitcoin account. Spell it out for us, Agent Ryan: “This wasn’t a jewel heist. It was a Bitcoin heist.” 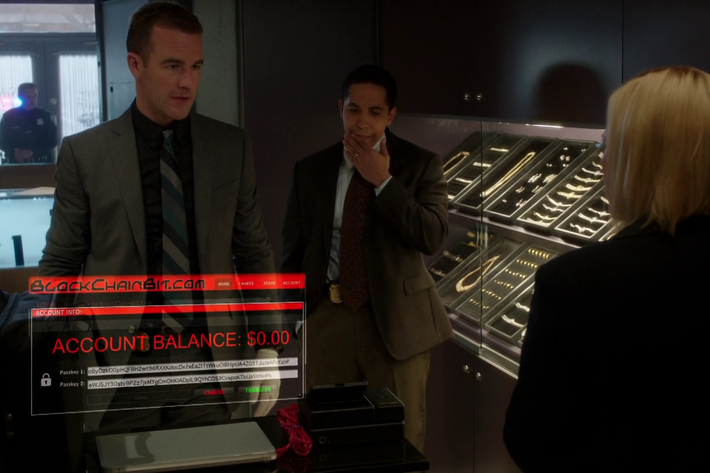 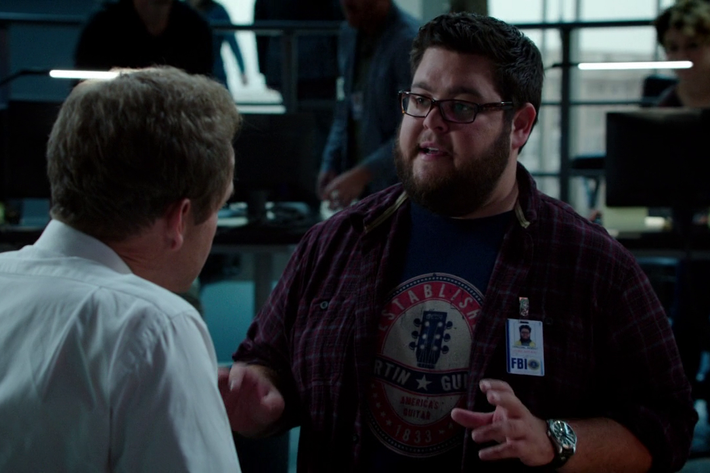 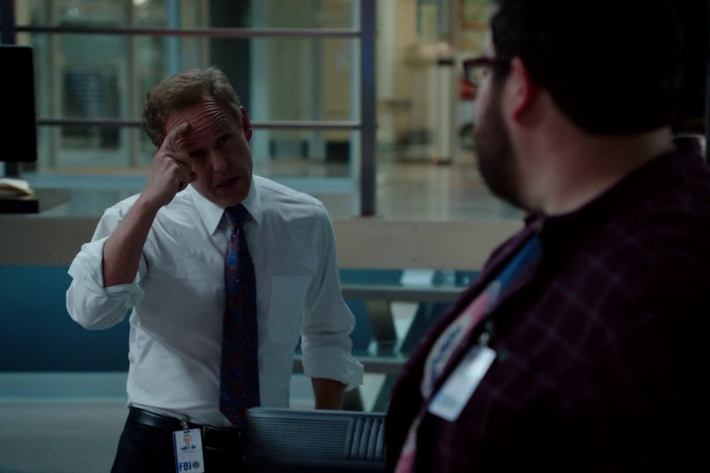 Nelson, Mundo, and Ryan manage to track down the Bitcoin bandit, but he is dead. He’s done multiple Bitcoin heists, and signs point to him having been tortured before his death. The robber was probably killed by “Bitcoin bounty hunters” hired by the victim’s brother. He emailed the guys at getbackbitcoin.com. Seems legit. 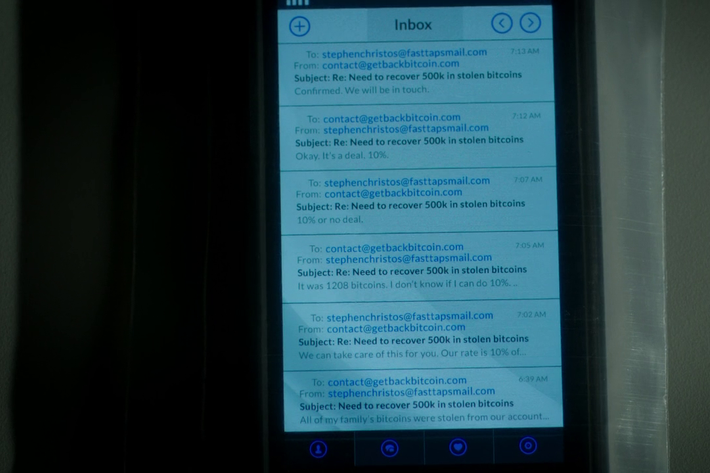 “Did you really think Bitcoin bounty hunters were the answer to all your problems?” Agent Ryan asks.

Okay, so now we get even further into the weeds. The dead robber was running a botnet, a network of infected computers secretly carrying out bad stuff. It looks like this. 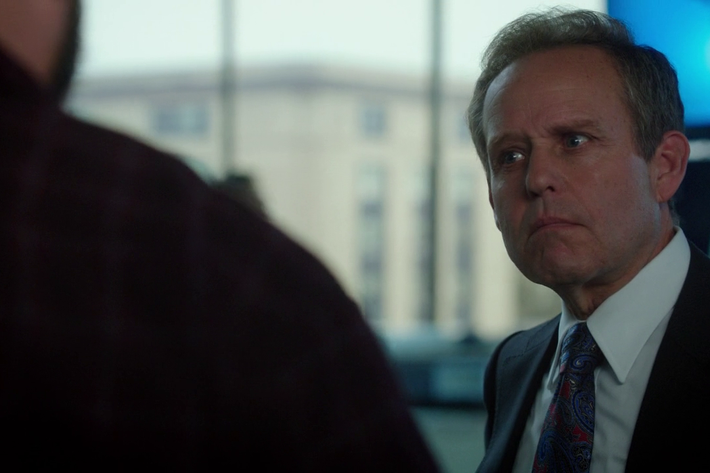 The passkeys to the Bitcoin are hidden somewhere on the botnet, and the bounty hunters know where. They steal one of the passkeys and are headed for the other. But! They screwed up, as all hackers on CSI do.

They accidentally sent an email from a computer with parental controls. A classic mistake. Parental monitoring software tracks everything. This is how it works:

Back at the lab, Nelson opens a mystery box. What’s in the box? 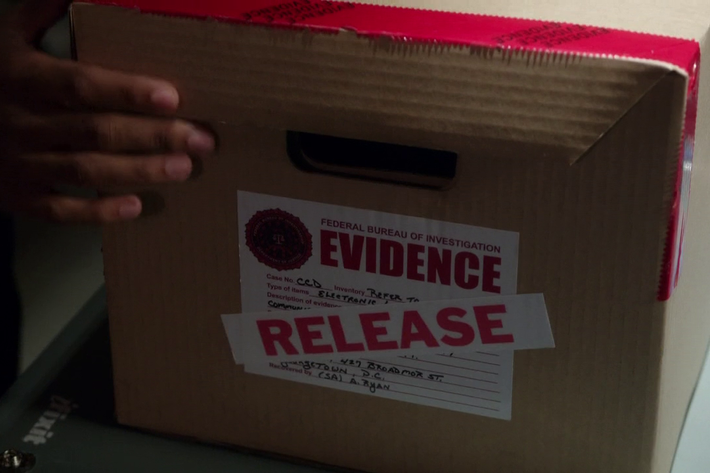 It’s a bunch of old tablets. Reformed blackhat Nelson is finally allowed to use his old gadgets again. He boots up a tablet and immediately accesses the most perfect image. 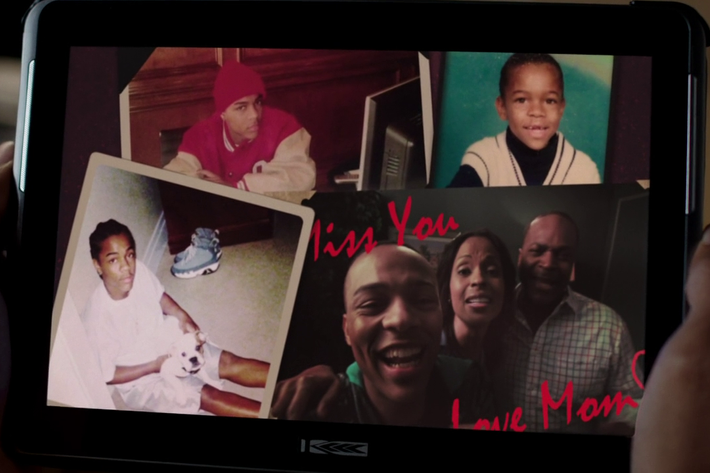 They track the passkey to Albuquerque and discover that the bounty hunters are mistakenly headed to Denver. Agent Ryan celebrates by unleashing a sick high-five psych-out.

They head to Denver to head off the bounty hunters. Krumitz sets up a computer trap, while Nelson shadowboxes. The sexual tension between them is palpable.

Once out in the surveillance van, the monitoring system fails, and we’re back at the beginning of the episode, with Krumitz sprinting into the house to fix it. Meanwhile, a boy who lives at the house foolishly returns home, and Ryan heads in to protect him and Krumitz. She pretends to be their mom.

The little boy has no clue what’s going on. He is being held at gunpoint and is super chill about it. 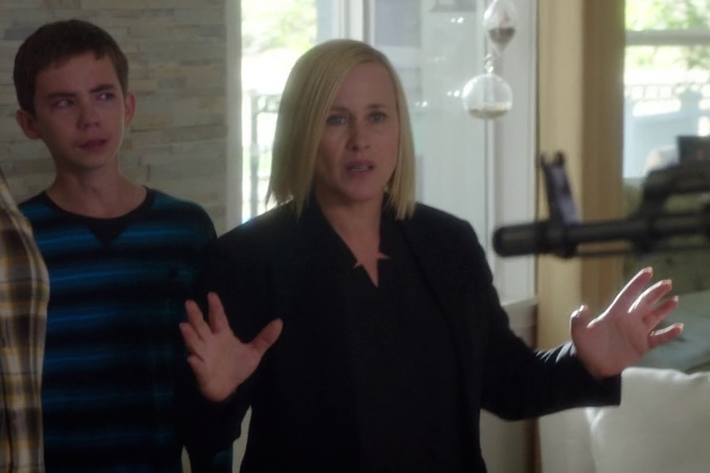 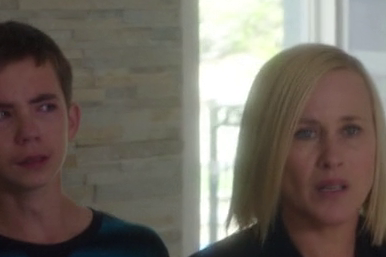 Nelson’s just hangin’ out in the van. 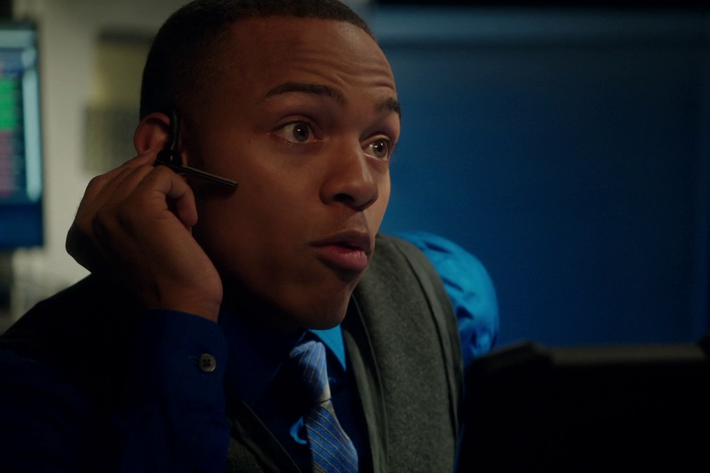 Krumitz knows exactly how to play this delicate situation: He pretends to be bad at computers. He makes a face that reads, “What on Earth is this confounding glow-box?” 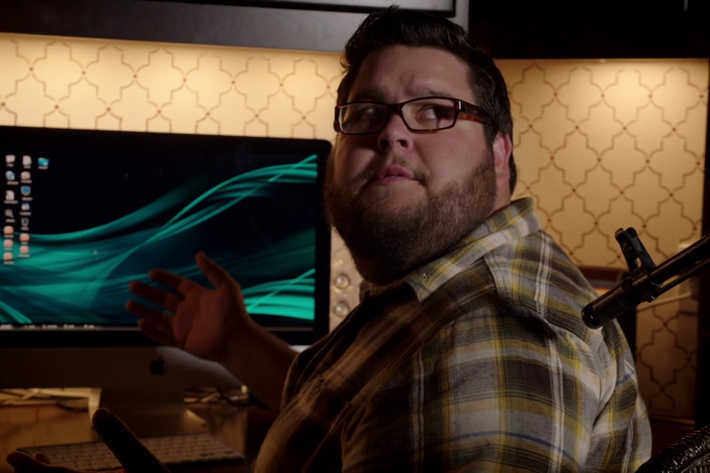 He fumbles his way around, leading to the single best line reading of the season: an angry man with a gun saying, “You clicked the wrong folder, you idiot!”

Back in the living room, things are getting tense. Luckily, Krumitz (Krumitz!) gets a long-overdue hero moment, while Mundo — the strong, sexy one — just sits around like a dingus.

Back at HQ, Nelson dives back into the Bow Wow Box. It turns out that Agent Ryan was the one who got him his stuff back. Nelson is very surprised about this. 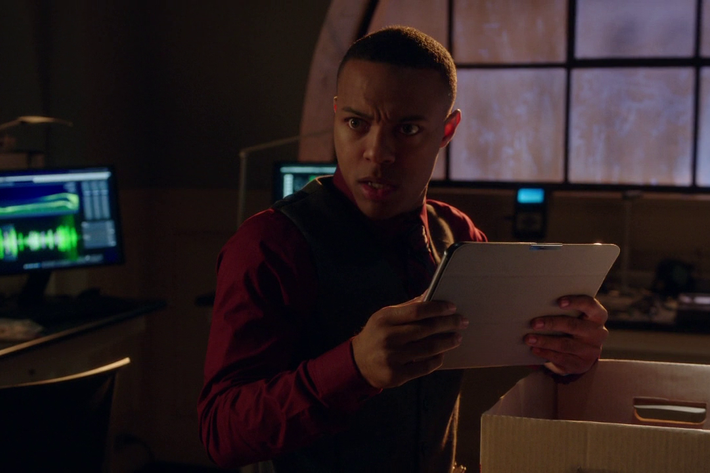 He calls his parents. Calling your parents: the ultimate life-hack.

MOVING ON: We made it. The first season finale of CSI: Cyber. We begin on a rooftop, where someone is assembling a sniper rifle. A rifle pointed at … 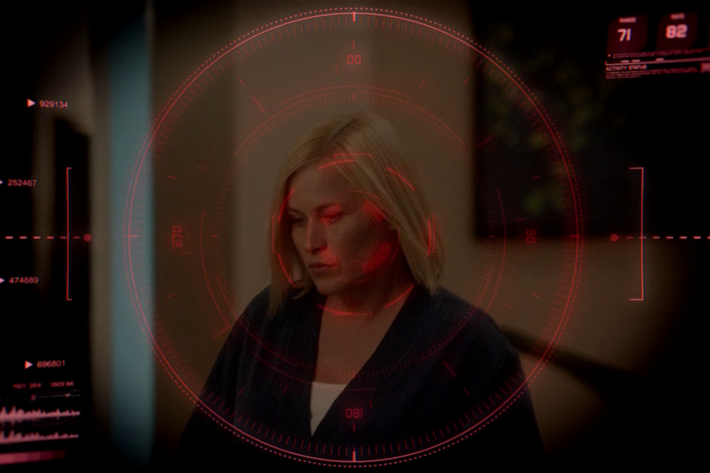 Avery Ryan?!! What a twist! But who’s pointing the rifle? 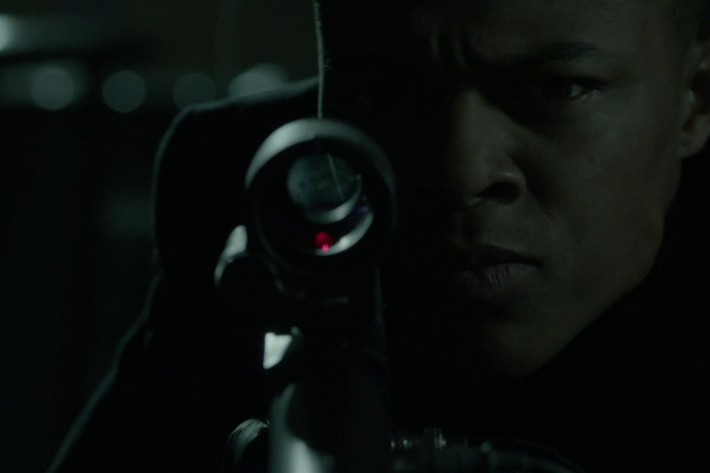 Nelson??? Bigger twist! He pulls the trigger on his high-tech sniper rifle. 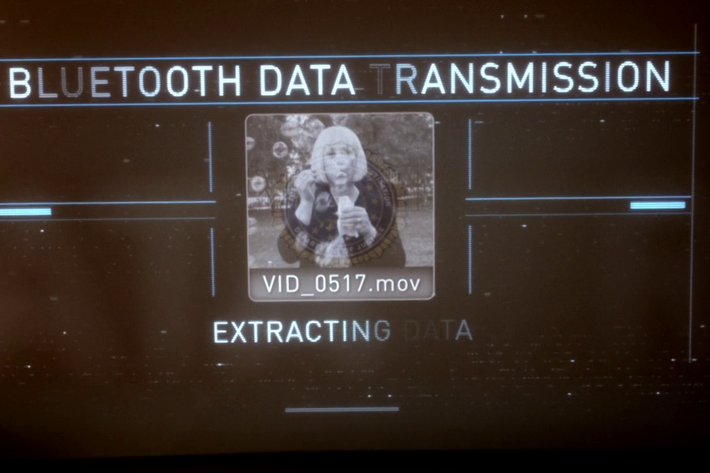 Sure! This is how cybercrime actually works.

Nelson calls Raven, but before he can finish the call, a mystery person hits him over the head and knocks him out cold.

Meanwhile, at the diner, Krumitz and his sister reminisce about their dead parents, who were murdered by a guy. That guy is also eating at the diner (very crazy coincidence) because he got let out on parole or something? It is contrived. Krumitz gives him some advice: “Let me give you a little piece of advice: Don’t do anything wrong.” Good tip! Let’s all take it to heart. 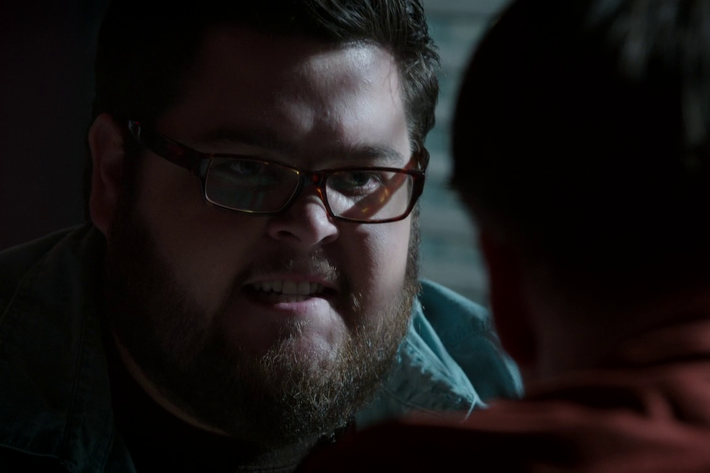 (Remember that? It is how every episode of CSI: Cyber starts. “My psychiatry files were hacked. I was a cybervictim, but now … I’m a cyberdetective, looking at computers with my big magnifying glass. The biggest in the world.”)

Nelson is missing, but Raven covers for him. 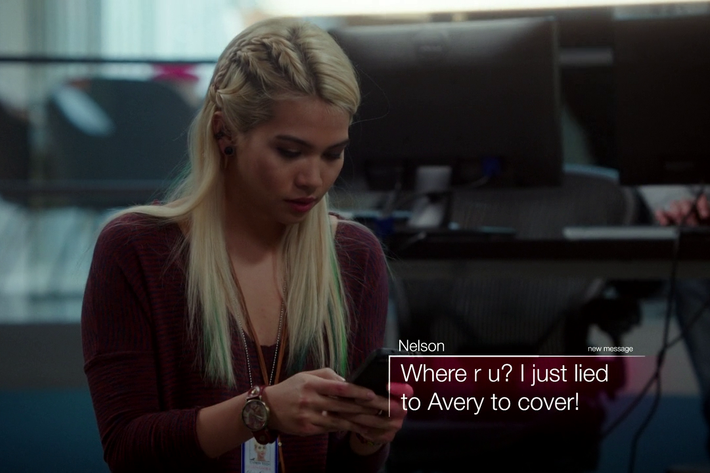 Ryan and Mundo head to the office of Dr. Richard Chan and find him dead on the floor. It’s time for a crime scene montage.

Ramirez tracks Nelson’s phone and finds him tied up on the roof. 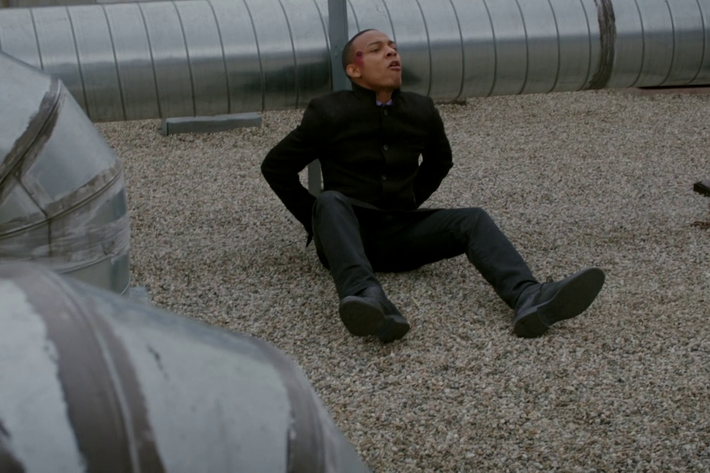 He runs off to talk to Ryan. It turns out that Nelson has been trying to solve the mystery of who hacked Agent Ryan. He found her files on the deep web, and found the virus on her computer. (It was hidden in that bubble video).

The Trojan found on Ryan’s computer and Chan’s are identical. It’s the same hacker … He’s back.

Agent Ryan proceeds to do the dumbest thing in the universe. She copies the infected bubble video over to her new computer, and it proceeds to infect all of C-TOC.

She did it intentionally in order to get the hacker’s attention. He directs her to a storage locker containing a webcam and a message. 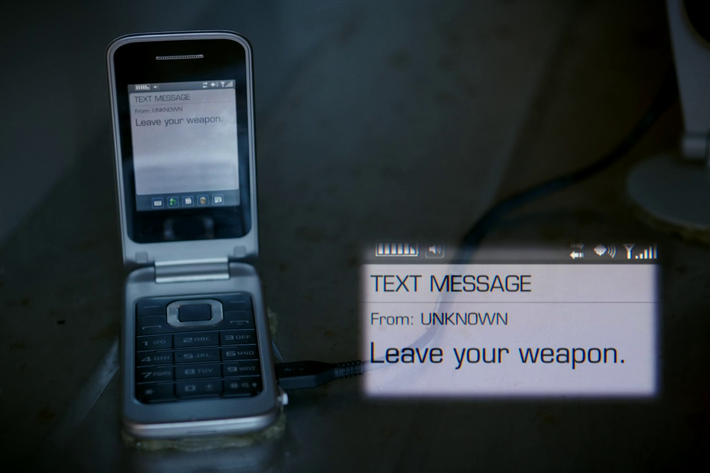 Meanwhile, Mundo tracks an IP address to Connecticut, where he finds not the hacker, but Ryan’s ex-husband. In this scene, James Van Der Beek learns about the concept of divorce and he is not happy about it. 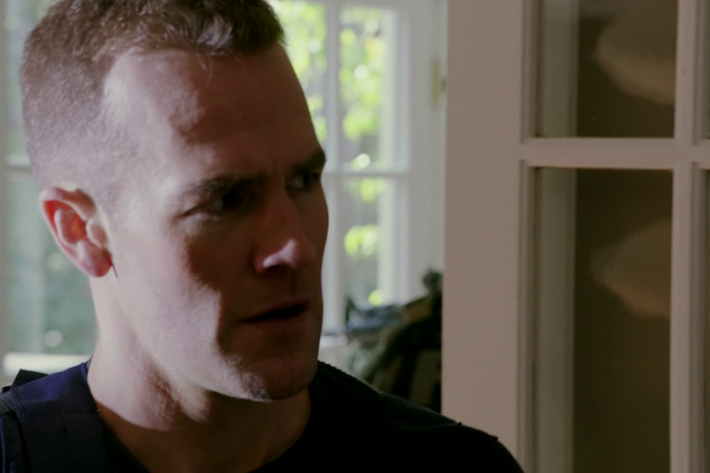 Avery heads to an abandoned warehouse containing a re-creation of her old psychiatry office. Classic hacker MO: meticulously reconstructing old offices. She starts to psychoanalyze him and figures out that it’s one of her old patients: Logan Reeves.

Okay, cool, so it wasn’t just a video of a grown, adult person blowing bubbles alone in the park. Sorry I made fun of that earlier, I guess? 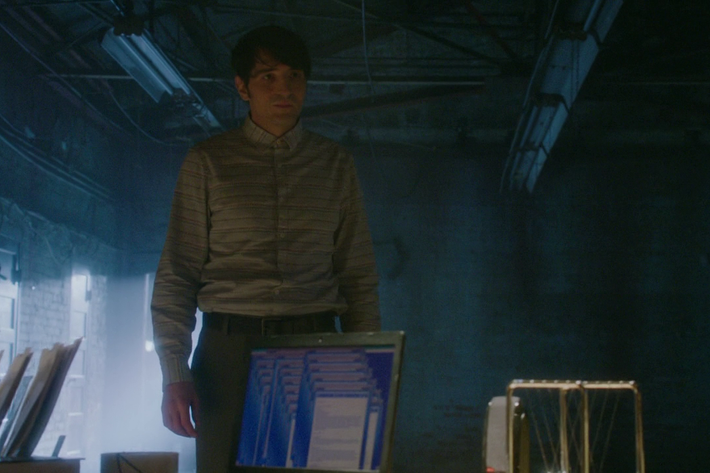 The team continues trying to find the virus’s origins over at C-TOC using an old computer that Ryan’s ex-husband supplied. Remember the ‘90s? 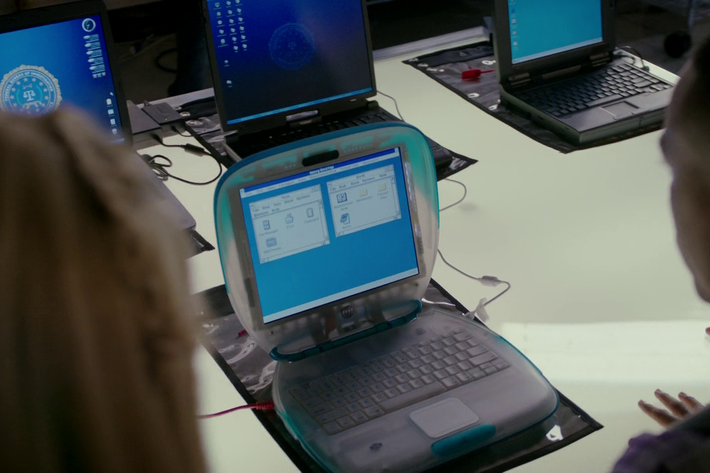 They figure out that it’s Logan also. So now everyone knows that it’s Logan. Logan is an expert hacker. Here he is performing the ultimate computer hack.

Logan makes the mistake of turning his back and Agent Ryan boops him on the head.

Ryan gets rescued and then we learn the significance of the bubble video. It was a video of her until-now-unknown dead daughter.

Which leads to this season’s big cliffhanger. Remember that murderer that Krumitz threatened? Well, his sister snapped and killed him. With a gun. Gun-hacked. 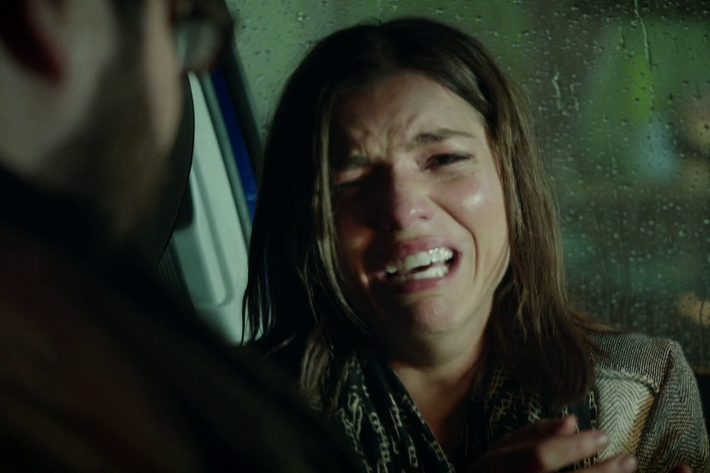 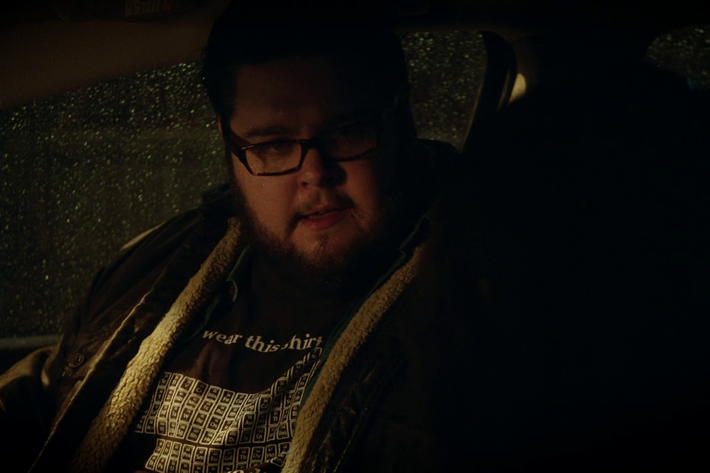 +Comments Leave a Comment
CSI: Cyber Recap: This Is the End … for Now

my album is dropping 2:44 a.m.
Bruce Springsteen Writes a Letter To You, Releases New Album and Apple TV+ Doc The documentary captures the process of the 5 days he spent recording the album at his home studio in Colts Neck, NJ.
very good q&a 2:06 a.m.
Borat Defends His Very Good Friend Rudy Giuliani in Livestream Q&A Event “Rudy will not hesitate to reach inside his legal briefs and take out his subpoenas.”
2020 presidential debates 1:08 a.m.
Congrats, You’ve Survived All of the Presidential Debates of Election 2020 We’re one step closer to determining who will be America’s next top (or bottom, quite frankly) president of the United States.
new music 12:09 a.m.
Miley Cyrus Announces New Album Plastic Hearts, Featuring *Gasp* Original Songs She lost her progress on the album when her house burned down two years ago.
my single is dropping 12:00 a.m.
Get Into Ariana Grande’s ‘positions’ Song and Video Now As if the full album isn’t already out next week!
campaign ads Yesterday at 10:39 p.m.
Biden Campaign Takes Down Ad With Rare Beastie Boys Song Due To Harassment It was taken offline after the ad’s central figure, Joe Malcoun, began receiving threats from Trump supporters.
chenquieh Yesterday at 9:15 p.m.
Who’s Who in Borat 2: A Guide to Every Notable Cameo All the characters, normies, and public figures in the order they appear in Sacha Baron Cohen’s Subsequent Moviefilm.
By Dan Reilly
apple tv+ Yesterday at 7:36 p.m.
Apple’s Epic Series Pachinko Sets Cast, Begins Filming on Multiple Continents The series, based on the novel by Min Jin Lee, follows a multi-generational Korean immigrant family in Japan.
music videos Yesterday at 4:37 p.m.
The Weeknd’s Big Ol’ Decapitated Head Haunts the ‘Too Late’ Music Video He went from being somebody to no body.
movie review Yesterday at 4:02 p.m.
The Witches Contains the Most Extra Anne Hathaway Performance of All Time I wouldn’t say it’s good, but it’s definitely big.
By Alison Willmore
let it rage Yesterday at 3:25 p.m.
CBS Just Goes Ahead and Posts Part of Trump’s 60 Minutes Interview And now Trump has posted a 37-minute video of the interview to Facebook.
long lists Yesterday at 3:00 p.m.
Sarah Cooper’s Netflix Special to Feature Many, Many Guest Stars Whoopi Goldberg! Megan Thee Stallion! Jon Hamm! Other people!
buffering Yesterday at 3:00 p.m.
Quibi Was the Streaming Era’s New Coke A product not enough real people wanted, a solution to a problem that didn’t really exist.
they're just like us Yesterday at 2:23 p.m.
Lenny Kravitz on That Big Scarf: ‘It Was Cold’  “Okay, the scarf is big, but the internet has made the scarf enormous.”
this week in comedy podcasts Yesterday at 2:00 p.m.
This Week in Comedy Podcasts: Music Talk With Judd Apatow and Mike Myers Rounding up our favorite comedy-podcast episodes of the week.
By
book excerpt Yesterday at 1:15 p.m.
Why New York City Is the Ideal Cinematic Setting for Finding Romance An excerpt from The Encyclopedia of New York.
By Bilge Ebiri
last night on late night Yesterday at 12:55 p.m.
Bruce Springsteen Plays Tennis-Racket Guitar in Front of His Bedroom Mirror We demand a livestream.
trailer mix Yesterday at 12:30 p.m.
Christmas on the Square Trailer: Starring Dolly and Christine Ba-humbug-aranski Premiering November 22.
trailer mix Yesterday at 12:05 p.m.
Tom Hanks, Civil War Daddy, Is the Captain Again in News of the World Trailer Still shooting for a Christmas theatrical release.
comedians you should know Yesterday at 12:00 p.m.
Christina Catherine Martinez Prods the Bog of Consciousness The part-comedian, part-critic talks starting out in comedy and her earliest childhood memory.
More Stories